One Year In, Local Lit Gathers Around Story 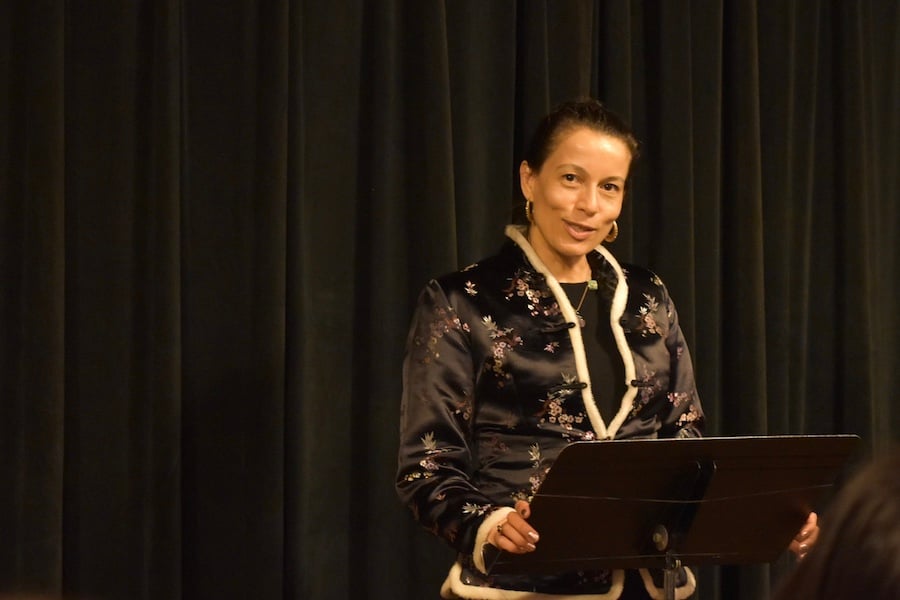 It’s like a book club, but better. There’s no homework. The group leader asks the best kinds of questions, and the author is right there to answer questions you might have yourself. Plus, there are snacks. Lots of snacks.

That’s one way to describe Local Lit @ LOTTA, a bi-monthly event that celebrated its first anniversary last Tuesday at Lotta Studio in Westville. Over the course of the evening, co-founder Rebekah Fraser led an audience of about 15 people in a discussion of three works read by local authors Robert Beech, Chelsea Dodds, and Amy Bowers.

In Beech’s “Night Patrol,” a young police officer named James embarks on an overnight shift with his partner in a rough neighborhood. One moment James is checking out a suspicious car, the next he’s face-to-face with another officer and a dog from the K9 unit, both of whom had been killed in a shoot out the previous week. Before he can make sense of it, James and his partner are making a high-speed getaway that ends with their car plummeting off a bridge. In the supernatural tale, the young officer learns what it really means to be part of the night patrol.

Listeners said they felt swept up into the details as Beech read the story and they wanted to know more about the other characters—but perhaps in another installment rather than in this story.

At the end of the discussion, Fraser opened up the floor to questions for the author and the audience dove in. One attendee asked how the story came to Beech.

He woke from a dream at three a.m. and just had to get it all down, he answered.

How did the story evolve? He started with the title and then wrote his way towards it.

“What was the dream? What woke you?” someone had to know.

“We were going off the bridge!” Beech responded. 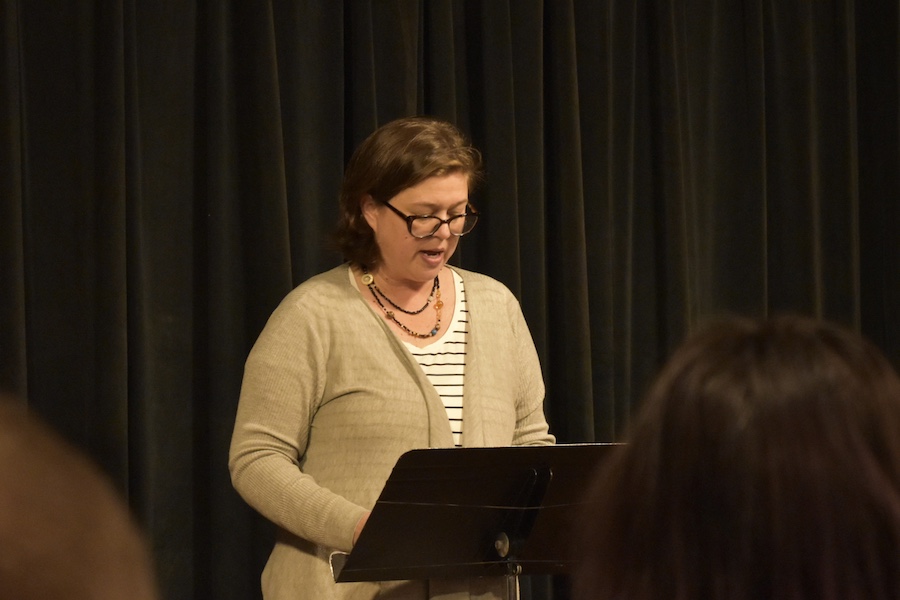 In the next story, Dodds’ “Suburban Cinderella,” the main character Amber wants to go to a semi-formal father-daughter dance at her school. The problem? She doesn’t have a dad or a dress: the former is in jail for a DUI and the latter is beyond her family’s means.

Between sips of beer, Amber’s mother helps her try on a hideous hand-me-down dress some co-worker’s niece wore as a bridesmaid—a garish, emerald green frock with frills of lace that choke at her neck and make her look like a porcelain doll. Amber’s mother has also lined up a dad substitute: Uncle Vinny, who’s forty and single with pictures of naked women all over his apartment.

Desperate to fit in with kids who have more money and social cache than she does, Amber takes a pair of scissors to the dress, cutting away as much of the lace as she can before slipping the scissors in her purse and getting in the car with Uncle Vinny. Once at the dance, she finishes handling the fashion emergency in the bathroom, getting some unexpected support from one of her more popular classmates.

The story reminded some audience members of the movie Pretty in Pink. Others were on tenterhooks till the very end, worried that with the combination of mean girls, scissors, and creepy uncles, it was going to turn into something more like Carrie.

Throughout the discussion, conversations around theme, character arc, and believable endings all led back to the supporting character Karli. Taking Karli’s arm and heading from the bathroom to the dance floor, Amber is “ushered out of the dismal world the adults around her created, and into the teen world she wasn’t a part of,” said attendee Robert Darragh.

But in this Cinderella story, is this girl from the in crowd Prince Charming? Amber is able to shift—gaining confidence and joining the party—partly because Karli comes to rescue her. But audience member Emmet McMullan saw Karli as the fairy godmother instead, and not just because she helped Amber fix her dress.

“Karli is a higher status figure extending the compassion needed so you can change,” he said. “Before there was a sense she couldn’t go anywhere without an adult and now she’s going off with a peer.” 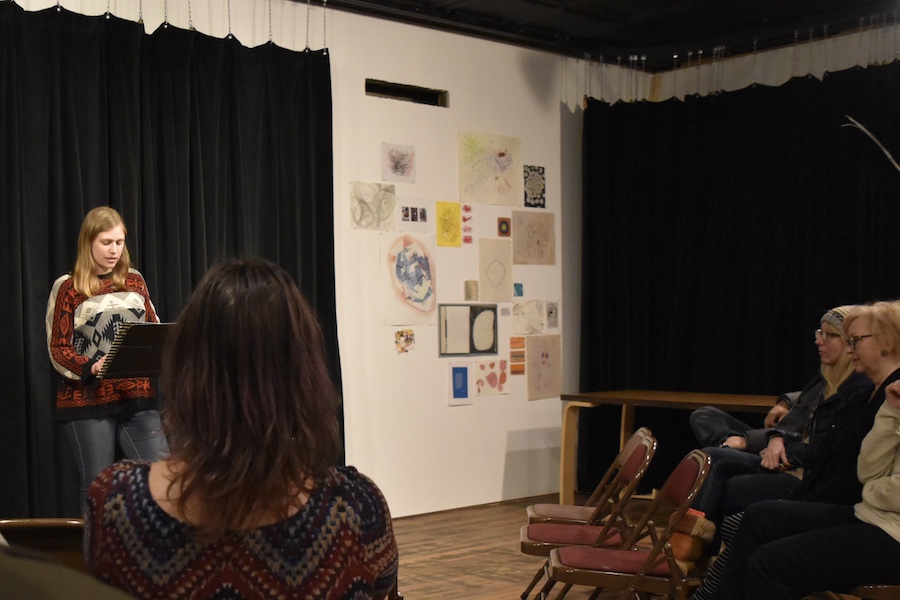 After an intermission, the evening concluded with Bowers’ “Manual,” a lyrical memoir describing a deadly police shooting that happened just yards away from the author’s house. As Fraser noted, Bowers’ narrative had “a woven quality” to it, intertwining the author’s unborn child, the brand-new toaster she had ordered from Amazon and a tick that had burrowed its way into her son’s leg. Bowers used each of those seemingly-unrelated pieces to tell the story of how she healed from trauma of witnessing such a violent act.

The audience seemed to follow the tapestry, noting the poignant contrast of witnessing a death while pregnant with new life and relating the surreal descriptions of toast soaked in blood to the Catholic symbol of the Eucharist. Audience member Nancy Antle understood why the narrator was hyper-focused on removing the tick from her son’s flesh, obsessing over whether or not he would get Lyme disease.

“Is my son going to be poisoned forever? Is this trauma going to be with me forever?” Antle imagined the narrator asking.

During the discussion, Fraser relayed a question from the author to the audience: Would the piece work better with more information about the victim? Attendee Shari Weaver spoke up right away.

“I love that we know nothing about him. I love that she keeps us in the dark because, as she’s witnessing, she’s in the dark,” she said. “I don’t want to know any of that. I just want to understand how she gets through this.”

Others agreed, saying that a tiny moment in which the narrator remembers interacting with the victim and his cute puppy was enough to fill in the picture.

“There’s no moralizing about the person and his life. We have a neutral image of him: he’s just another human,” said McMullan. “To have known someone and then watched them die, that’s the experience we want to know about.”

In a quiet moment after the reading, Antle said she first came to Local Lit as an author, taking a “leap of faith” and sharing a story she hadn’t shown to anyone else before.

“I was terrified to read in front of a bunch of strangers, but it was wonderful,” she said. “No one’s here to kill your writing, they’re here to encourage you.”

After that first experience, Antle has returned a few times, and said that hearing the different voices and styles of authors “makes me realize I don’t have to stay in a narrow lane of creativity.”

For McMullan, who’s become a regular, it’s the diversity of voices in the audience that he most appreciates. The opportunity to explore a good piece of writing in community is the draw.

“Let’s go back to the campfire and tell a story to each other,” he said.

Local Lit meets on the 1st Tuesday of every other month at Lotta Studio. The next event will be on June 4 at 7 p.m. Authors of all experience levels who would like to read their work aloud are encouraged to submit their fiction, creative non-fiction, or memoir. Details and submission guidelines can be found here.