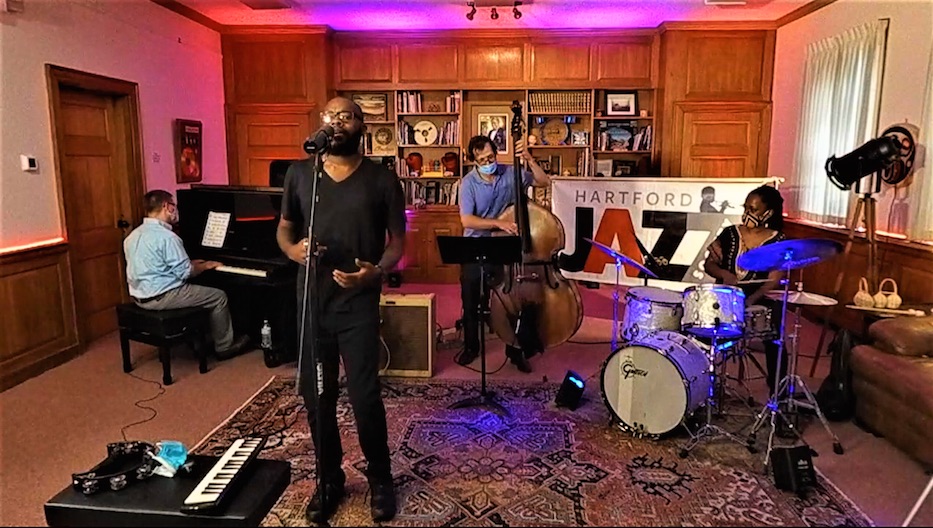 An announcer’s sultry voice echoed just out of frame. “Wherever you are, let’s put our hands together and welcome some of Connecticut’s finest.”

That’s when the samba started—think dimmed lights and a hush. There were the rhythmic beats of a session shaker and the spice of a syncopated rim shot. There was the dash of bass pizzicato and some fingerboard slaps. A piano chord sounded, and a crooner leaned into his mic—the beginnings of a serenade.

“If it’s date night for you, hold your partner real close.”

Monday evening, the Hartford Jazz Society kicked off its annual Paul Brown Monday Night Jazz series with headliner Orice Jenkins. Due to COVID-19, the festival moved from its regular, well-loved spot in Bushnell Park to the internet, starting with its first Facebook livestream this week. Over 100 tuned in live, with views that climbed to 1,931 afterwards.

Jazz bassist Paul Brown founded the summer festival in 1967, making Monday Night Jazz one of the oldest run jazz festivals nationwide. Hartford Jazz Society renamed the celebration in Brown’s honor after his passing in 2016. This year, the series features six Monday night performances between July 13 and August 17. The series is funded by The Edward C. and Ann T. Roberts Foundation.

“Ten years ago, I started going to this series. My godmother Tony Williams took me, and Paul was there that night,” Jenkins recalled. “She introduced me to him, and Paul was sitting at the front of the stage. I’ll never forget how nice he was to me and how wonderful he always was—it’s great that we renamed that series, and we keep his memory alive, always and forever.”

Monday, Jenkins appeared with the Orice Jenkins Quartet. The group—performing masked and socially distanced—features pianist Matt DeChamplain, bassist Matt Dwonszyk, drummer Jocelyn Pleasant, and Jenkins on voice, guitar and melodica. Jenkins is the mind behind the 2016 album Soar, number eleven on the iTunes jazz chart that year. He received critical acclaim for his 2014 release Around the Piano: Extended Play and 2017 record Tertiary: A Millennial Mixtape.

“The day starts with sunshine, but you’ll get the blues by five~!” It was a Miles Davis classic. Minor chords and a silky beat beckoned listeners.

“It’s so good to be here, representing the great Paul Brown and everybody else that brought us here!” Jenkins said in a voice as smooth as velvet. “I love this jazz society.”

The day starts with smiling, but you’ll get the blues by five~! A rendition of “Blues by Five” turned the Facebook livestream to jazz lounge. A swung bassline chugged the groove along.

“I’ve been attending this function for a long time now, these past ten years,” Jenkins added. “We’re really glad to be doing this here. Thanks for keeping the music going.”

You! Can’t! Es-cape! Those! Blues! By five~! The line was joy and the air electric. Pleasant banged her drum set, Dwonszyk rocked his bass from side to side, and DeChamplain nodded his head in time with his piano’s keys. Jenkins was home.

“It’s so good to be back at this, ya’ll,” Jenkins said. “Lemme tell you, I know that I’m not actually related to these people on stage, but they are my family. Being away from them for these past four months has not been fun.”

Jenkins flashed a smirk at his bandmates. They sent a mix of winks and smiles back. Jenkins gave a tiny laugh and lightly tuned his guitar.

This was jazz—the reactivity of it. It was all smirks and glances, musical nudges, and improvisational feats. It was a conversation between players, accented beats, and the audience. A jazz lead sheet could only give so much; it provided a basic melody and chord structure for players and vocalists to follow. The rest was up to the performers—spontaneity. 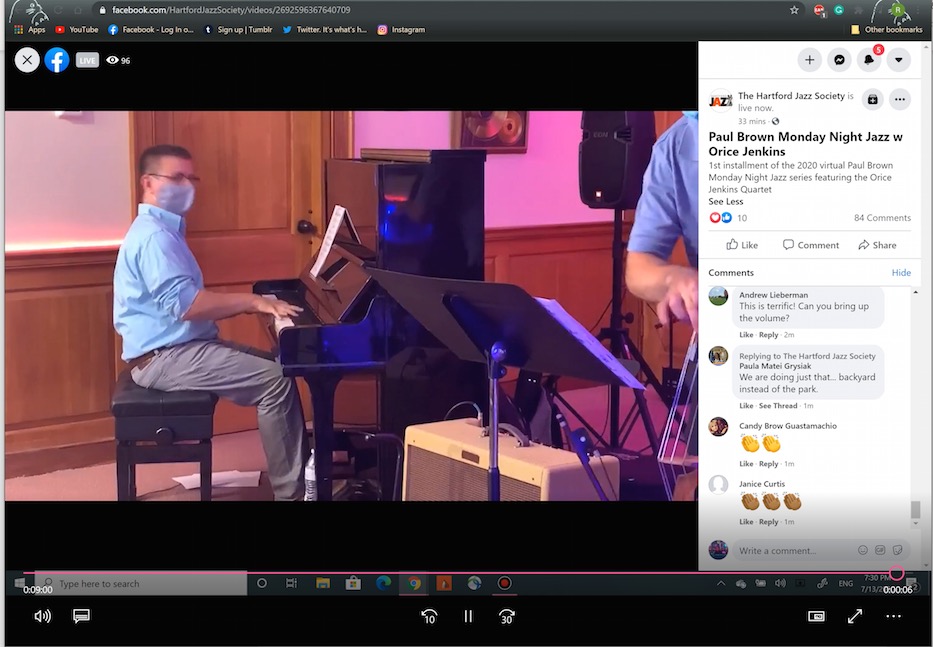 Each player felt the mood. Sometimes, they’d perform slow and steamy, floating along a set scale. Other times, their beats were erratic, extraneous notes and beads of sweat propelling the piece forward.

COVID-19 couldn’t hold back that momentum. The performers wore masks and sat socially-distanced; they could still use their eyes and ears to keep time. While there were no audience members to clap, snap, whoop, or shout during improv solos, the livestream’s chat was full of compliments, handclap, hand-raise, and flame emojis. The crowd was hyped, and the jazz was too hot to handle.

Jenkins channeled the audience’s investment into the emotional climax of the night.

“We’re going to do a song from my most recent album called Centennial Cole. Before I do this song, however, I want to take out my phone and mention the people that I’ve lost during this time, over the past four months or so since March 12th when everything shut down.”

Amid the room’s silence and the pause of a hundred keyboards and a hundred computer screens, Jenkins read his list. It was a list of friends, family, and loved ones he and his bandmates were grieving. Among that list was Jenkins’ long-time jazz inspiration, mentor, friend, and confidant Freddy Cole. He passed last month. Cole was the brother of Nat King Cole. Jenkins dedicated his next song to both— a piece called “Birmingham.”

The work began with minor chords, syncopated strikes to a closed hi-hat, and a mournful bassline. Jenkins opened his mouth and began to sing:

The hoods don’t like us ‘cause we’re-uh—from the hoo-ood~! We try to fight them ‘cause they’re-uh—ain’t no good~! The time has no-ow come for me to ma-kuh a stand~! They knocked down King Cole in Bi-ir-ming-ham~!

The song told the story of King Cole’s 1956 performance in Birmingham, Alabama. He was performing that night for an all-white audience. That’s when his attackers struck.

‘They really think they’re slick-uh with their—silly red line~! They want us to believe that things will change-uh with time~! We have to tell our young, ‘Don’t believe the man!’” Because of what happened down in Bi-ir-ir-ming-ham~!

The four KKK members attempted to beat King Cole and drag him off stage. Police diffused the situation and brought them in for questioning. Later that evening, law enforcement found rifles, brass knuckles, and a blackjack weapon in the assailants’ vehicle. During King Cole’s performance, a white audience member had shouted, “Negro, go home!” 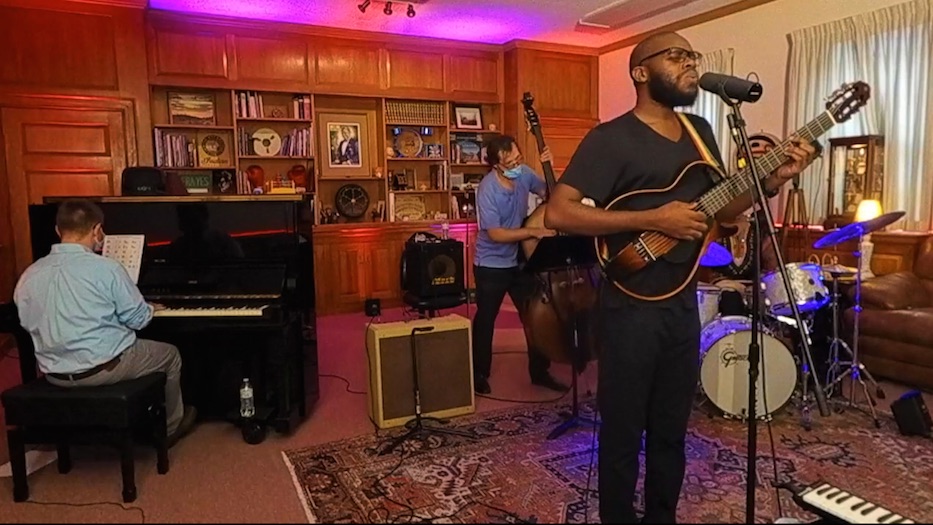 Jenkins turned from the raw, bluesy track to more hopeful and calming tunes. He gave a solo rendition of King Cole’s “A Blossom Fell.” He dedicated an arrangement of Nina Simone’s “To Be Young, Gifted, and Black” to Black Lives Matter and all the Black bodies that remain struggling nationwide. Finally, Jenkins wrapped up the night with a heartfelt track from Eric Reed, the first performer he saw at Monday Night Jazz so long ago— Jenkins sang “Prayer.”

Here. We are. You. And I~! Together ano-other time~! Hoping that one more rendezvous with you! Hoping that my Lord will deliver my soul! Still. That’s not e-nough~! Still, I pray~!”

Jenkins kept his hands clasped and eyes closed in prayer. DeChamplain played the song out. Jenkins sang the next few lines:

Thank you so much Hartford Jazz Society~! Matt DeChamplain on piano~! Matt Dwonszyk on bass~! And Jocelyn Pleasant on the drums, on the drums, on the drums~! He gestured around the room and through a hundred screens. Thank you for keeping the music alive, the heart alive. Music will never die, no matter what coronavirus or SARS disease that you throw at us! Thank you guys so much. My name is Orice Jenkins—O-R-I-C-E. Mm-hmm~!

Jenkins gave a warm smile, a wink, and one more toot on his melodica.