Philosophers Unmask A Moral Side Of COVID-19 Public Health Debate 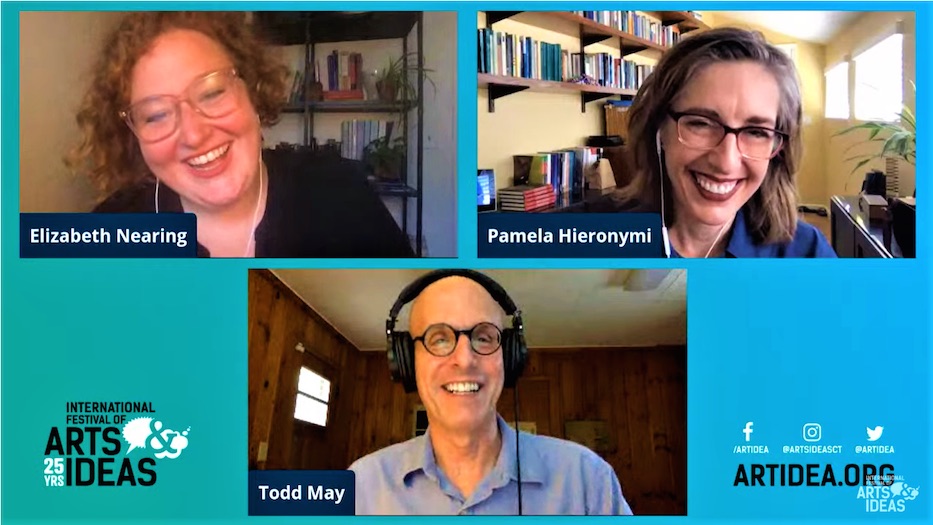 Does choosing not to wear a mask mean that Americans have opted for their own comfort over their neighbors’ safety? Is a face covering really a question of rugged individualism over communal solidarity?

Can it tell the country something about being fundamentally good?

On Friday evening, philosophy professors Pamela Hieronymi and Todd May took on that question as part of "On Being Good: A Conversation with The Good Place Philosophers." The talk marked the final ideas event of the 25th annual International Festival of Arts & Ideas. Elizabeth Nearing, this year’s curator of ideas, moderated the 90-minute discussion.

Hieronymi is a professor of philosophy at the University of California, Los Angeles (UCLA). May is a professor at Clemson University in South Carolina. Both academics were philosophical consultants for NBC’s The Good Place, which ran for four seasons from 2016 to January 2020. Set in the afterlife, the program brought ideas of religion, ethics, and morality to the fore of public consciousness.

Now, they’re bringing those ideas to a world besieged by the parallel pandemics of COVID-19 and structural racism. Both began the conversation there, with the question of what mask wearing can tell Americans about the philosophical state of the country—and its residents. In the past months, masks have been shown to reduce the spread of COVID-19  by limiting the transmission of respiratory droplets between people.

To provide a framework for the discussion, both philosophers filed the issue under the philosophical theory of “contractualism.” Under the construct, all individuals that make up a society exist symmetrically. Peoples and ideas are considered equally, in the goal to reach mutual agreement among all members towards a perceived good.

“Why don’t we all wear masks? We have to ask who can object to that on what basis, and who can object to the opposite,” said Hieronymi. “You could object to a principle that requires us to wear masks on the basis that the people who are unlikely to be endangered find it inconvenient or uncomfortable. Then, the people who are going to be at risk could object to a principle that would allow people not to wear masks, because it puts their lives at risk.”

“Now, we must weigh those two grounds for rejections—we weigh up risks to a person’s life and inconvenience to another person," she continued. "If we’re treating everybody symmetrically, it’s clear what principle we would adopt—the principle that would protect people’s lives even at the cost of some inconvenience to others.”

May agreed that the refusal to wear a mask is distinctly selfish—it runs against the common good of a contractualist society. The act indicates that individuals feel no guilt for deleterious effects on their fellow man. Perpetrators view their lives above others’ own, discounting shared humanity.

Hieronymi and May added in the concept of “free riders”—the idea that some people may shirk the responsibilities and guidelines a given population sets, but assume they can still benefit from those guidelines. Hieronymi gave the example of a subway system. It demands that all passengers pay their fares. Some individuals slip through, figuring they can ride for free without the system’s collapse.

The problem, of course, is that it violates the social contract. That same concept can be extended to wearing masks: some Americans go mask-free, and assume that they can still benefit from their mask-donning counterparts.

Nearing listened intently, then pinpointed a critical flaw in Hieronymi and May’s theory.

“I wanna call attention to one of the assumptions in contractualism—equality,” she said. “As we know, this world is definitely not equal to everyone. Talking about masks, when Black people or people of color put on a mask, there is a very different perceived impact. How does this fit into your theory?”

After a pause, Hieronymi revised her theory to encompass the realities of racial profiling. 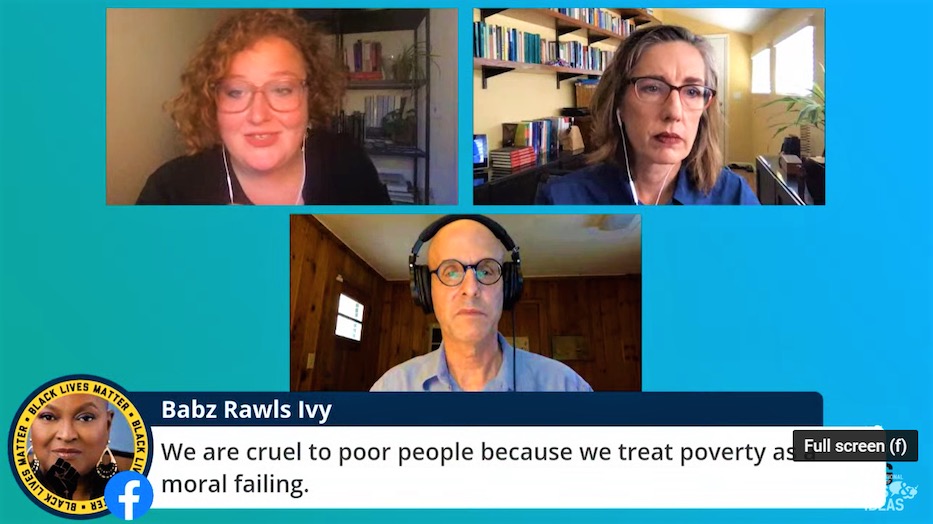 “Let me correct my little story—I ended it too quickly,” Hieronymi said. “I ended it with the person who said, ‘Well, it’s a threat to my life—it makes me less safe if other people don’t wear masks because I’m at risk for this very serious disease that we don’t have any cure for at the moment.’ But somebody else might say, ‘Well, actually, I’m at risk if I wear a mask because I’m a person of color in a neighborhood where I’m likely to be profiled.’ That’s a very good reason to object to the principle that requires everyone to wear a mask, so the moral rule is going to end up being fairly contoured—'everyone must wear a mask’ is a rule of thumb with necessary exceptions. In these exceptions, we transition from the concept of ‘goodness’ to ‘cruelty.’”

Hieronymi and May dissected the philosophical forces behind the act of racial profiling. They pointed to the traditional, sadistic definition of cruelty and subconscious cruelty, one in which individuals do not gain pleasure from others’ pain. May explained that cruelty in all forms derives from a violation of contractualism. The denigration of outside groups historically was—and still is—often a justification for cruelty itself.

May gave an example, explaining how cruelty has contributed to another pandemic—police brutality. For police, who are in a position of power, he suggested it is easy to think of themselves as "above" civilians. The addition of race adds another complicating factor; policing itself is an outgrowth of white supremacy and the creation of race to systematically oppress people. In many police forces, civilians with darker skin tones present a distinct out-group. When police view the out-group as “less than,” that provides avenues to treat others in ways that by “any reasonable recognition are cruel.”

May pivoted to the maximum-security prisons where he teaches philosophy. Mass incarceration has ensured that those prisons were—and still are—disproportionately filled with Black people and other non-Black people of color serving lifetime sentences. That population presented the out-group, pushed further away due to assumed criminality.

Hieronymi launched from May’s assertions to more subconscious and insidious forms of cruelty. Humans hold a fundamental fear of “moral failure,” she said. In philosophy, both moral failure and reactions to it are labeled “blame.” When humans recognize problems, they innately protect their self-interests, assigning “blame” to others. A teacher, for instance, may attribute student failure to lack of attention, while their students blame the instructor for poor teaching.

There is a power struggle concerning which group needs to act for the situation to improve, she explained. When “blame” overshadows the pressing concerns of a given population, it is subconscious cruelty that feeds the explicit forms May described. Many have ignored Black people's calls for equality, justice, and personhood in favor of the “blame game,” assigning blame to outside entities and ridding themselves of responsibility concerning social change.

Hieronymi noted the famous 1963 Milgram Shock Experiment, completed under the watch of Yale psychologist Stanley Milgram. In the experiment, subjects were partnered with confederates, or research actors who are used in experiments. Researchers led confederates behind an opaque wall and told participants that their partner was attached to a series of electrodes. Participants read a set of word pairs aloud. Confederates needed to memorize these

pairs and repeat them aloud when prompted by a corresponding word. Researchers demanded that participants shock confederates when they misquoted a pair. There was a direct relationship between incorrect responses and shock voltage.

Confederates purposely answered wrong repeatedly, testing if subjects would “shock” them at life-threatening levels. The majority did just that—even when confederates feigned wails, screams of pain, and calls for mercy. While Milgram used this experiment to analyze social deference to perceived authority, “obedience,” Hieronymi’s colleague identified the experiment as a study of “moral failure.”

To stop the test, participants needed to acknowledge what they’d done—the painful shocks to confederates—and the horrific nature of the researchers’ requests. As the experiment took place during the Civil Rights Era, Hieronymi directly applied the findings to white consciousness. To listen to marginalized groups, whites needed to believe their values were wrong and the society that encouraged them was flawed—a human fear. That still holds today.

“Then and now, white supremacy culture is, ‘let’s talk about this little thing and who’s to blame instead of looking at inequalities, people mattering, and what that means from a moral standpoint,’” May said. “People’s ability to knowingly do evil is very limited, but people’s capacity for self-deception is almost infinite.”

However, Hieronymi and May made clear that institutional change does not always come from individuals—a concept contrary to America’s increasingly individualistic ideals. May related the concept to police brutality once more, criticizing the “few bad apples” analysis.

“It sees the police as an aggregate of individuals rather than an institution,” he said. “It’s conceptually a mistake, because it reduces formal structures to the simple participation of individuals. If the police are racist, they are not racist simply because there’s a lot of racist individuals, but because one of the central functions of the police in our society is to maintain the imbalanced social hierarchy. We have to abandon individualistic thinking if we’re going to make real change.”