Poetry In The Garden Centers Healing 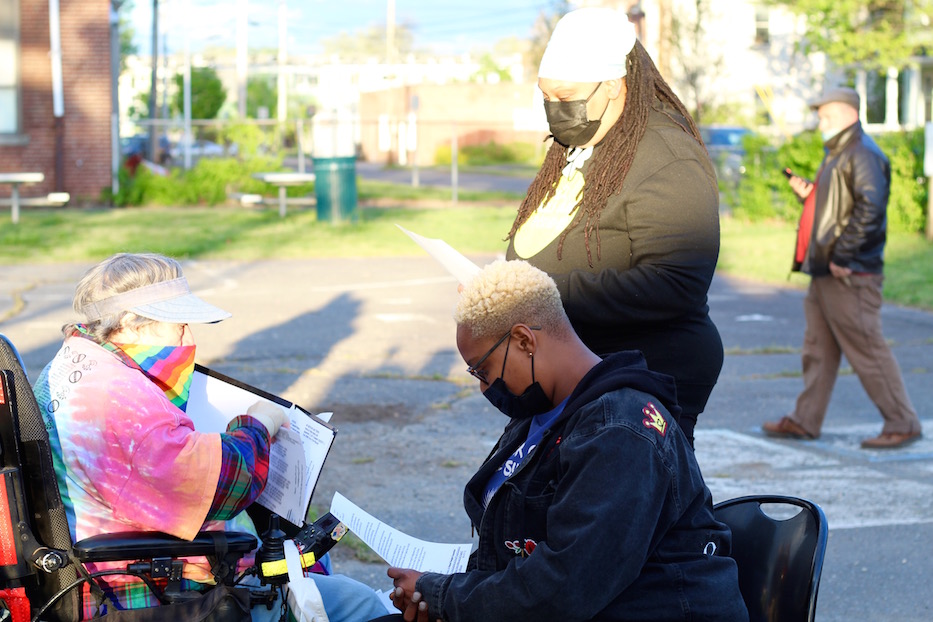 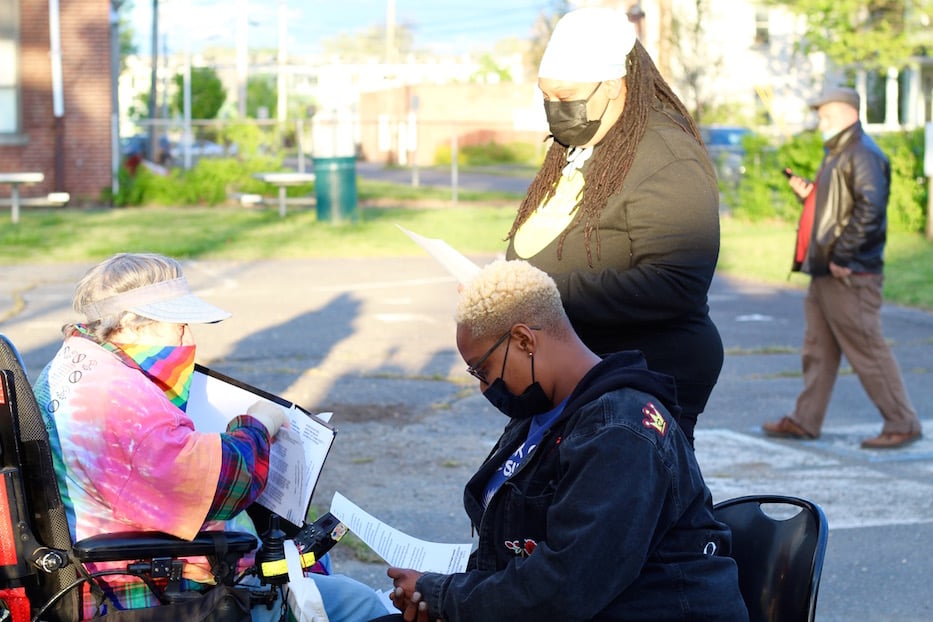 Ashleigh Huckabey stepped up to the mic, removing a black mask that fluttered in her hand. She lifted her phone, scrolling to the right place. She hadn’t been sure she was going to read. But among the potato seedlings and pepper plants, it seemed right. Sunlight fell over her face. She began her poem “Trauma Room.”

When I am feeling sorrow for my love, I think of the lightning experience
Which sparks from your touch, and the flow of my words extracting from my body
As your lips part, and you tell me you love me
Which is deeper than the worries, and the false prophecies this muscle in my crown produces
As a defense to not have my heart messed with again

Wednesday, Hukabey was one of a dozen attendees at the inaugural “Poetry In The Garden,” an open mic and library lovefest in the M.L. Keefe Community Center’s community garden. In just under two hours, the event attracted an intimate crowd of poets, philosophers, singer-songwriters and pint-sized musicians ready to perform in Hamden. It was a collaboration between the Hamden Department of Arts and Culture, which is growing its footprint at the center, and the Hamden Public Library.

By the time dusk fell, it had doubled as a chance to heal from a year—and a day—of particularly hard and heavy news. 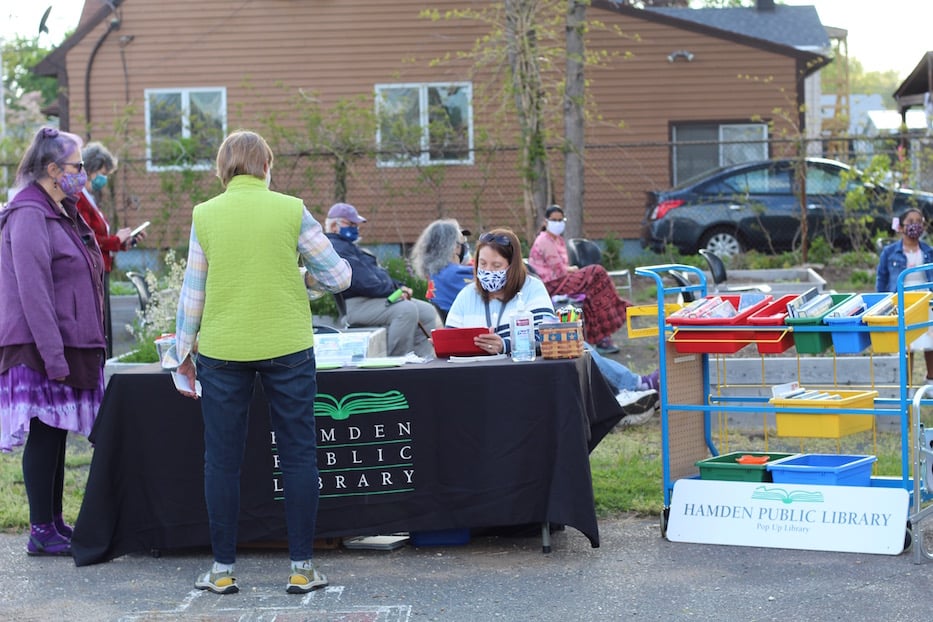 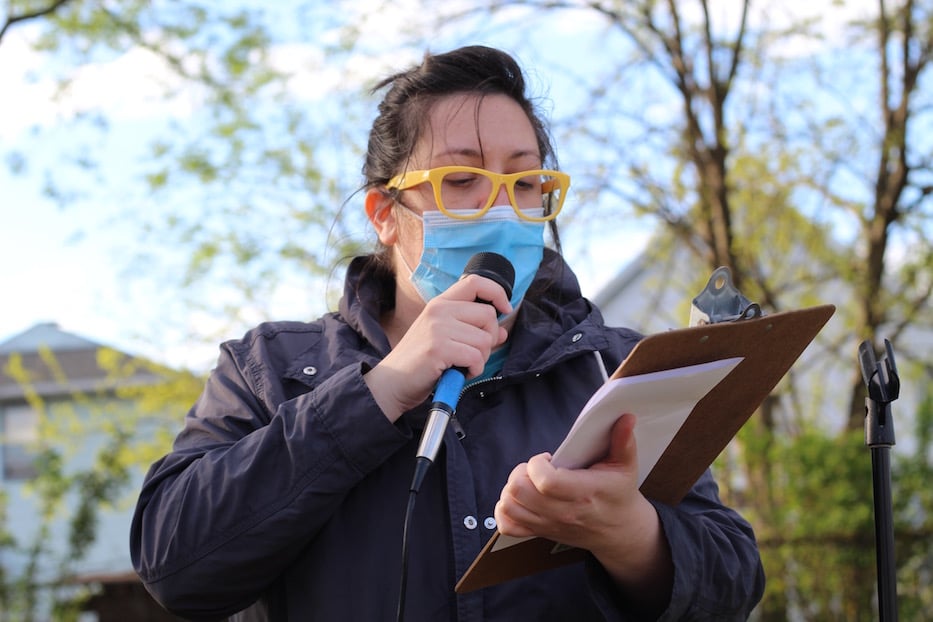 “As arts transitions over to Keefe, we wanted to start to do small events here and there to see how everything works and to gauge public interest,” said Alisha Martindale, arts and marketing manager for the department. “We’re going to have more of a presence here.”

Martindale dreamed up the event as a collaboration between the Hamden Department of Arts and Culture and Hamden Public Library. The garden, which sits just outside the center’s huge brick building on Pine Street, is run by the Hamden Department of Community Services, United Way of Greater New Haven, and Albert Schweitzer Institute at Quinnipiac University. The fresh produce harvested there goes directly to clients who use the food bank at the Keefe Center.

Wednesday, flowers and small plants swayed gently in the wind as people trickled in, some with scarves and quilted jackets to fend off the cold. At the edge of the garden, library staff, poets and patrons chatted with each other over a pop up library cart stacked with books. Melissa Canham-Clyne, director of the Hamden Public Library, handed out bookmarks printed with haiku. At a table, someone waited with a tablet to register new bibliophiles for their cards. Librarian Betsy Goldberg, who is piloting a seed library this year, pointed out potato seedlings to five-year-old Ananya Nanda.

The garden glowed multiple shades of green, ready for a benediction. Among rows of chairs, raised beds full of seedlings reminded attendees that the earth had started another season, despite everything in its way. A spider scuttled across a bed to find a patch of sunlight. Attendees settled into their chairs.

As readers came to the microphone one by one, the garden seemed more alive than usual. Ananya, who is in kindergarten, said that the year has been hard for her as she spends it at home with her mom, Priya Mishra. For over 12 months, her classes and activities have been remote. Last year, she participated in a virtual open mic at the library and was, for a moment, completely content. When Mishra heard that another would be held outdoors, she signed up.

“It’s been very hard because of Covid, for everyone,” Ananya said, showing off a weed that she had plucked from the grass. “I’m happy right now.”

As she stepped up to the mic in a sparkly dress and big purple headphones, the audience hushed. She sat up straight in a chair and introduced herself. She launched into the song “How Far I’ll Go,” which has become a kind of all-ages anthem to self-discovery. Members of the audience leaned in at a distance, holding their cheers until the end. She charged through the first verse (listen here), words sailing over the plants. She nailed the key change. As she sang, a bird flitted between fruit trees.

“You were so wonderful, honey!” shouted Elaine Kolb through a tie-dye bandana as the audience clapped.

The energy was infectious. Kolb, who has become known as a poet, fierce disability rights activist, and self-described “old hippie” warmed up attendees with what she calls “sit down comedy” from her motorized wheelchair, busting through any enduring -isms in the process. Then she got serious.

Wednesday would have been her father’s 95th birthday, she told the audience to a few murmurs. He died when he was 65 years old. Kolb, who is 71, outlived him. She pulled out a poem from May 12 of 2007, in which she described “my lifelong quest” to create and nurture a safe space for herself.

When she finished to calls for an encore, she got the audience laughing with her song “I Love Being A Crone,” a ballad of self-acceptance that she built on later in the evening. 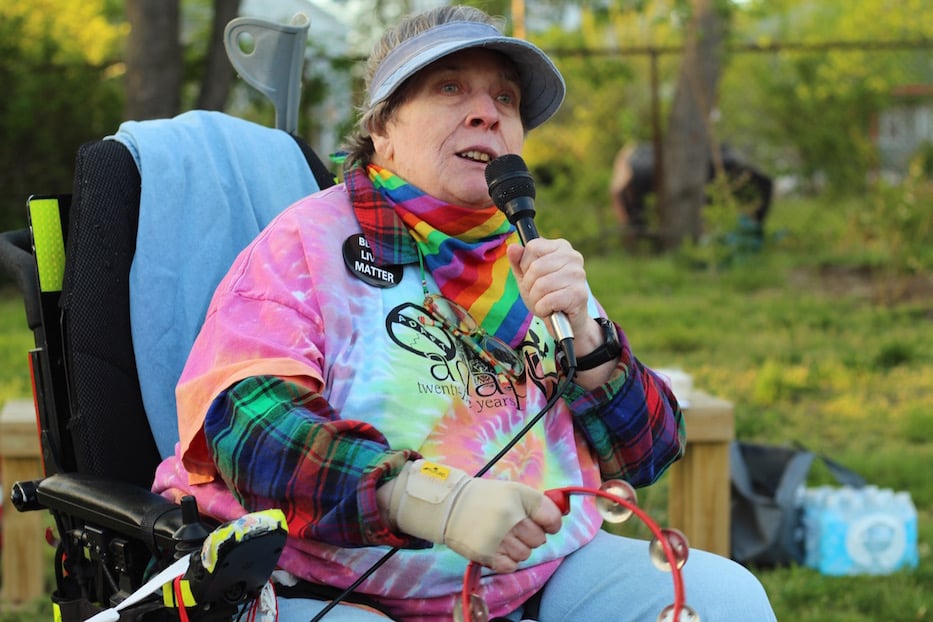 A stream of poets followed. Dee Broe spun universes from their chapbook Evil Bob Was Here, named after a fictional cat. In their poem “Delta Mike,” there was something instant about live, snappy spoken word, as much about wit and timing as it is about the poetry itself. In “A Human Mimic,” they embodied the existential anxiety of which they spoke, dropping lines so hot and quick they sizzled on the grass. A few snaps rose from chairs on the right side of the garden.

“I’m eating yellow trynna imitate greatness/But felt no pain inside my chest/How can one be so unbearably weightless?” they read. A small chorus of mmmmms, spread out across the garden, followed.

Others revelled in the outdoor space, reading short, pithy poems that burst with freshness. Hamden arts commissioner Marita Gargiulo brought some of her modern haiku, in a tribute to both the form and those that have been printed at the library. With sweeping hand movements, Paula Panzarella knitted a twisting and mysterious vision of New Haven, inspired by a poetry contest that the library held years ago. She imagined what a country might be if all of its poets were fired en masse. (“Equal pay for equal work? That’s commie talk, you poet jerk!” she read to laughs). 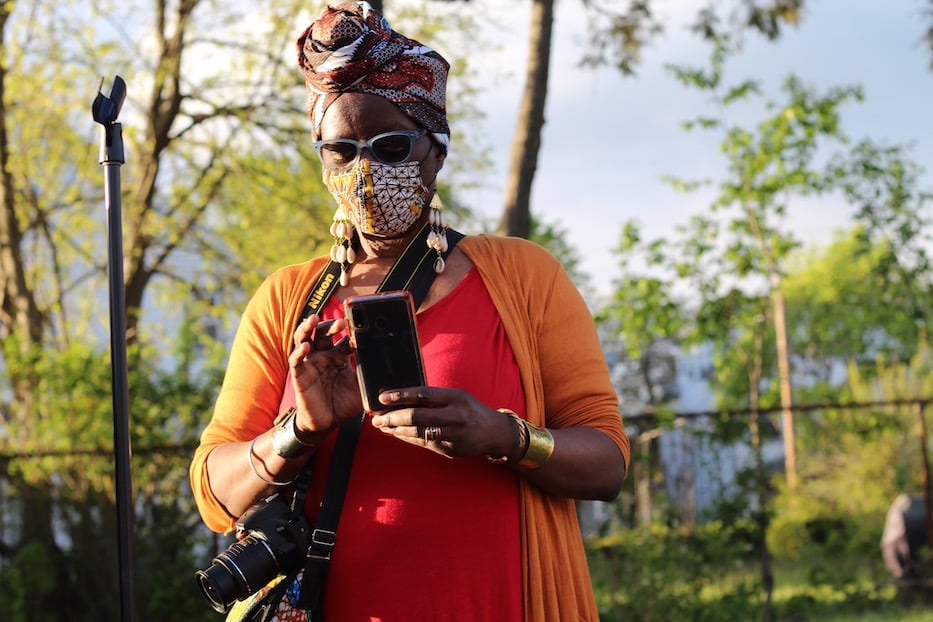 The artist and curator Shaunda Holloway, who is also a poet.

But for most of the evening’s performers—including many who did not plan to perform, and left with new friends—the chance to read became an act of ritual healing and resistance. With just 17 syllables, Joanne Ekstrom remembered the life of a friend who had carried a small notebook in his pocket, and recently passed away.

In her poem “surviving,” artist and curator Shaunda Holloway spoke about the past year, channeling the sing-song swing and lyrical swerve of the last poets as she read. She described Covid-19 as a vermin, tearing through families with invisible and furious force.

Had me belligerent and afraid
Had me stepping back to save myself
From a cough/Or a sneeze
Had me running in place, but none could see

Huckabey, who hadn’t been certain she was going to read, ultimately gave a sweeping tribute to her love—and to Black women suffering through the trauma of this year—with “Trauma Room.” When she politely smiled at the line “Pardon my past, you are my future,” attendees could feel the flush of it radiating through the space. She pointed to love as all-encompassing, divine and worthy of her time.

“We owe it to our ancestors to rewrite the story,” she read. “To create it. To paint it. Express it. We need to begin with love and healing somewhere in that cycle instead of hurt and trauma. We owe it to our hearts.” 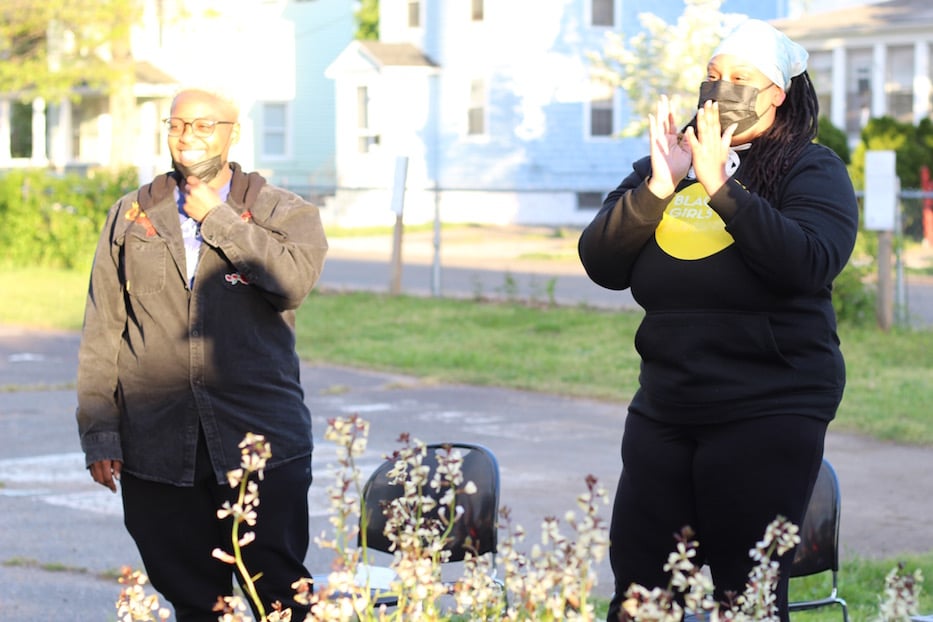 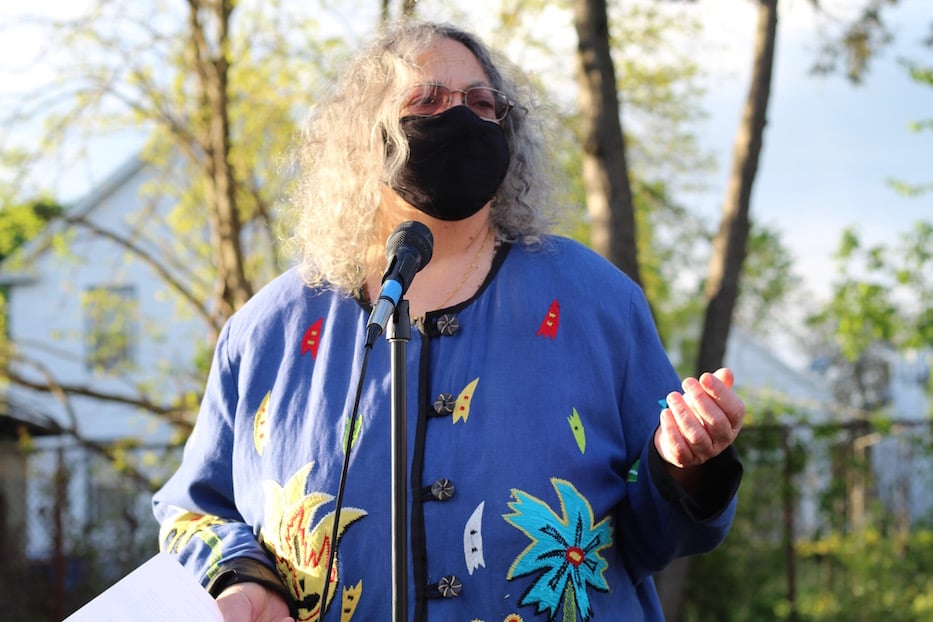 “I just came here to be in this space of artistry and somehow I’m here on this mic,” she said.

Both later said that the day—and the week, and the month, and the year—felt heavy until they released it in the garden. On Wednesday, Queen spent the day catching up on world news, particularly coverage of Gaza. She and Huckabey were mourning the death of New Haven firefighters Ricardo Torres Jr.  and William McMillian while holding out hope for the life of Samod “Nuke” Rankins. Of course the news feels personal, Huckabey said—New Haven is tiny. McMillian and Rankins aren’t just names to them.

She said that she and Queen, who live in Westville, are also mentally and emotionally exhausted. They hear sirens constantly, the sound ripping through the neighborhood at all hours of the night. A few nights ago, Huckabey woke up and swore she smelled smoke. They have been working with organizers across the region to bring attention to the disappearance of Jessica Hutchinson, a woman who is missing in Manchester. The poetry was there as a release.

“It felt amazing,” Queen said. “Art is healing. Where the art is, I’m going. Any chance that there is to be in community, to be together—whether it’s an air hug, or an elbow bump—we need all of that.”