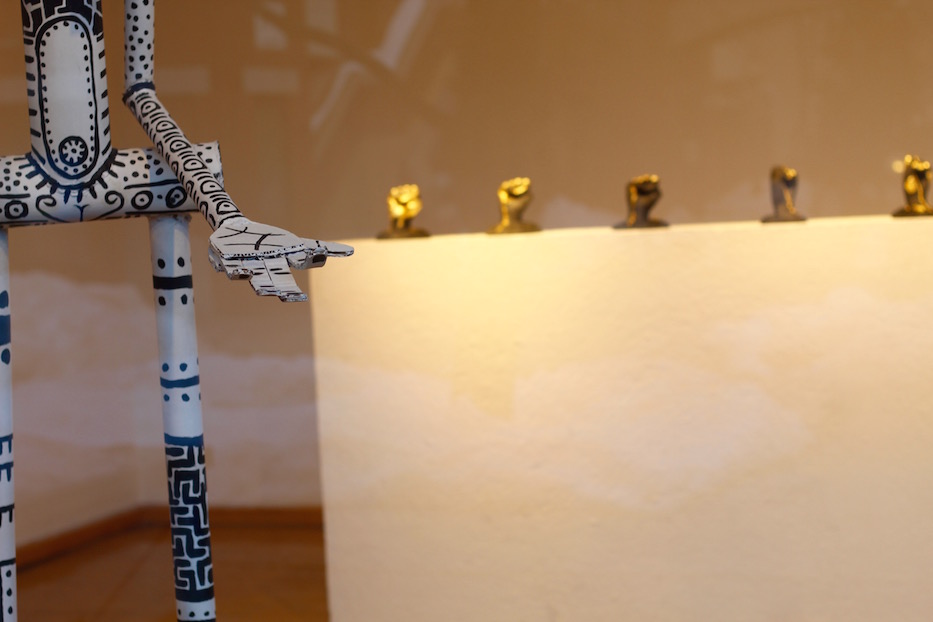 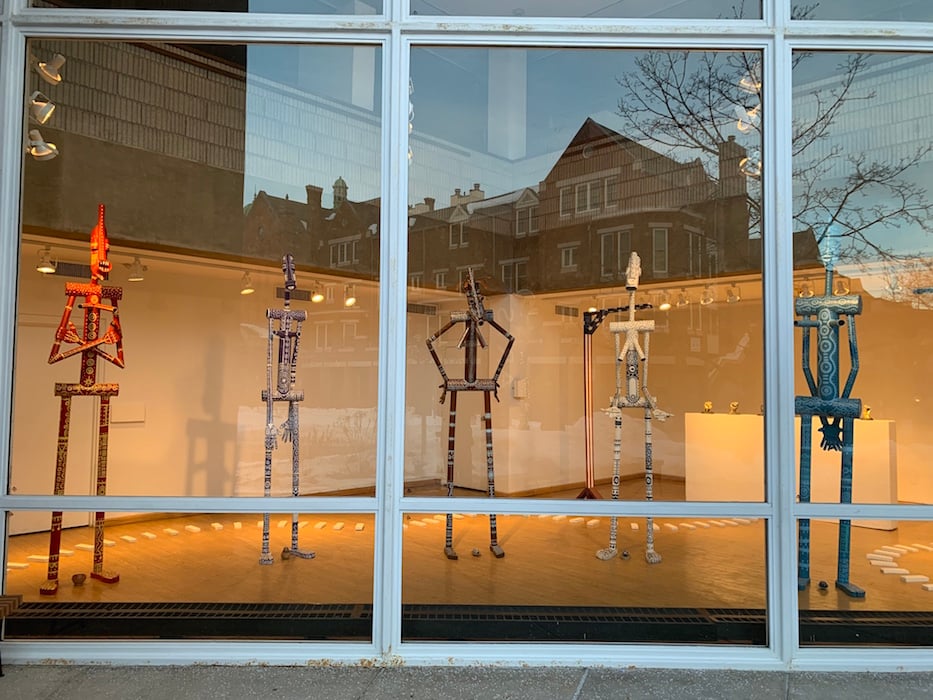 Made Visible: From Every Angle runs through Feb. 28 at Creative Arts Workshop. Lucy Gellman Photos.

The bricks wind gently across the floor, unraveling a history as they go. Beside a figure’s large, red-and-yellow painted foot, they seem like a river, the word FREEDOM stamped onto each of their faces. Further back, they become a road, leading to a display of raised fists glinting with gold leaf. As they multiply, the floor becomes a map, merging past geographies onto the present.

The installation is part of Made Visible: From Every Angle, running at Creative Arts Workshop (CAW) through the end of this month. The show, which features sculptors Aileen Ishmael, Iyaba Ibo Mandingo, and Kyle Kearson, is curated by artist Shaunda Holloway in celebration and recognition of Black History Month. Like previous iterations of Made Visible—including Holloway’s last fall—the exhibition makes use of CAW’s floor-to-ceiling windows, from which viewers outside can see in.

“To observe a sculpture from a single perspective limits what it has to say,” Holloway wrote in an accompanying wall text. “Black artists in the United States have experienced institutionalized racism and have been excluded from opportunities to share vast, multifaceted perspectives with viewers. They have never given in to being overlooked.” 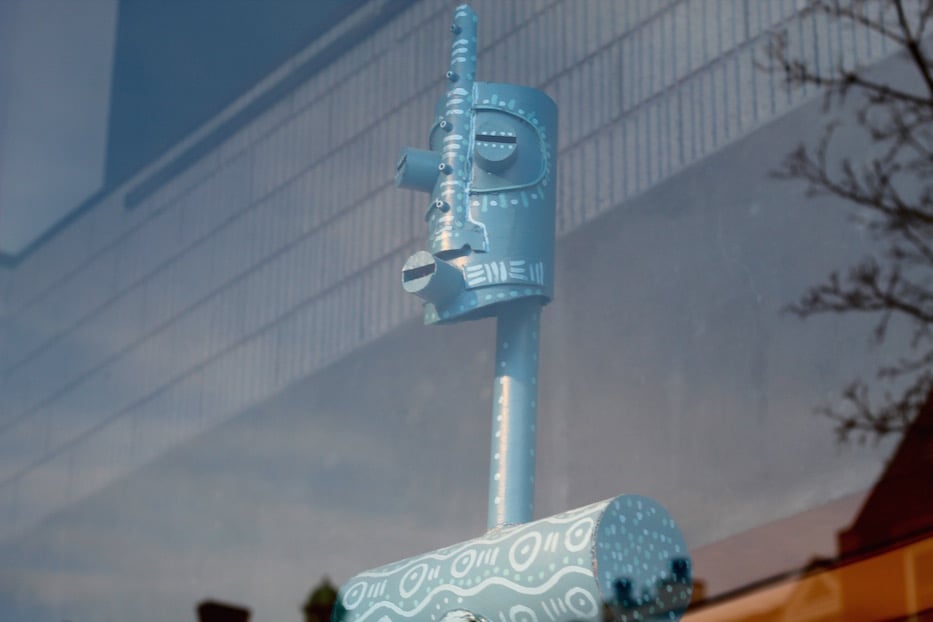 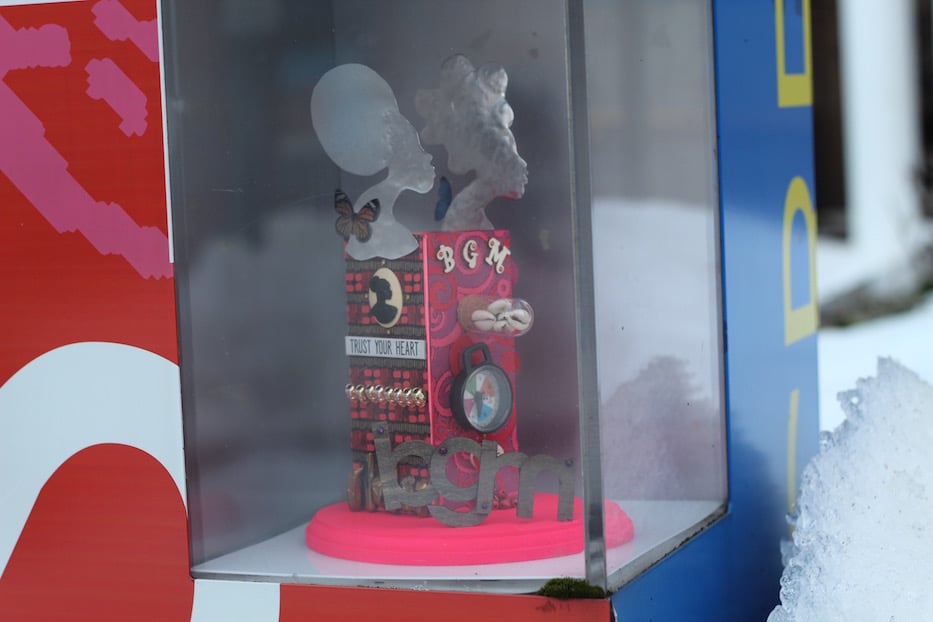 Each piece both holds its own and opens itself to a larger conversation. Before even reaching the gallery’s windows, a viewer may spot Ishmael’s Black Girl Magic from outside the workshop, where a display case is now half-buried in snow. In the piece, Ishmael has used multimedia collage to craft a tribute to Black women and girls, setting painted wood against cameo portraiture, laser-cut letters, conch shells, a compass, and metallic cutouts that conjure Kara Walker’s history-drenched silhouettes.

Inspired by the events of 2020—which arguably reach back four centuries—the work collapses past and present in vivid color. The sculpture’s sides are decorated in a shock of pink with patterned browns, blacks and bright and oxblood reds. From the top, two Black women look forward, their gazes fixed on something on the street. Gem-colored butterflies sit like on their shoulders. Form fits function: the box is both a container for Black brilliance and a physical support for it.

It marks a sort of entry point that separates the work from the quiet, cold street outside. Up a set of stairs and through the windows, Iyaba Ibo Mandingo’s Circle of Mothers is larger than life, their limbs reaching towards the heavens and back down to the ground. Constructed from recycled materials and painted by hand, the five matriarchs came out of the artist’s six-month stay in West Africa in 2015. Each has a small earthenware container between her feet, a sort of invitation to learn more about offering, Santería, and traditions an ocean away that are older than what is known as the contemporary United States. 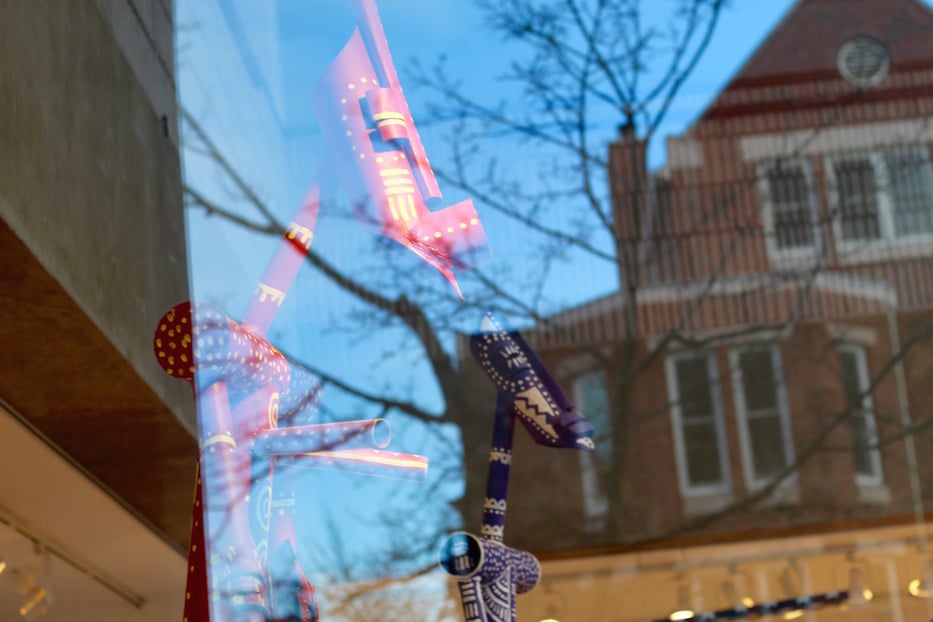 Their yoking of history and adaptive reuse thrums with energy, even through the thick pane of glass that separates them from the outside. In a video that accompanies the exhibition, the artist calls his journey to West Africa “beyond magical,” noting that it marked a transformation in his work. It’s visible in the sculptures, which are built from discarded cardboard tubing and painted in sharp, brilliant color that wards off the gloom of New England winter.

On their arms and legs, designs look like they could be Nsibidi, an early system of writing in Nigeria. The sculptor was taken aback when a mentor first made that connection: he’d never learned Nsibidi, but had painted the sculptures in something of a trance while thinking of his trip.

Around the mothers, there are constant reminders of the time in which the artists—and by extension, their viewers—are living. Recessed from the window, a white podium holds six sculpted fists, each tightly closed and painted in black and gold leaf. As they rise, they radiate both local and global histories: of enslavement and economic deprivation, of power and protest, of intentionally taking up space. They glow beneath a series of gallery lights. 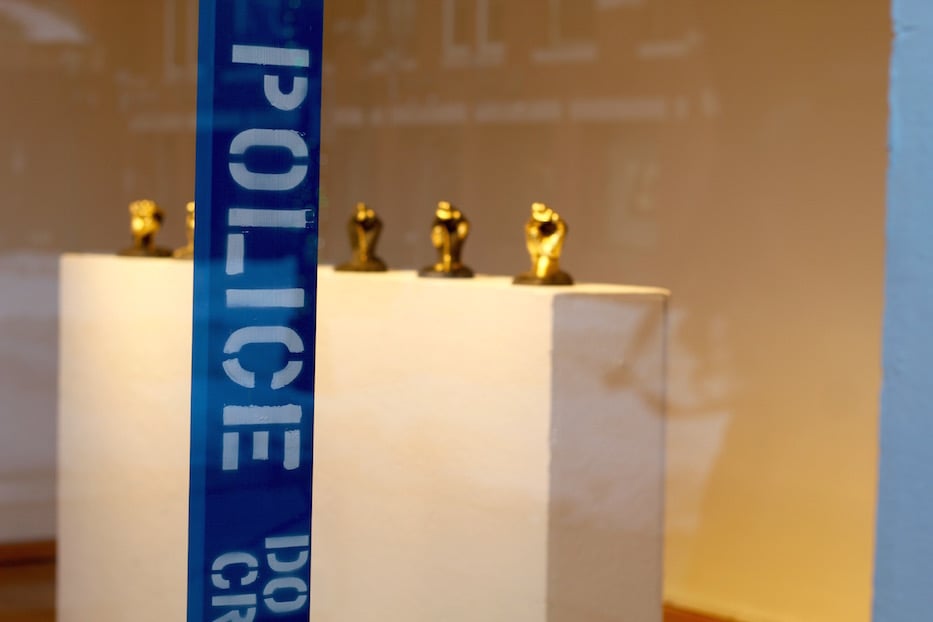 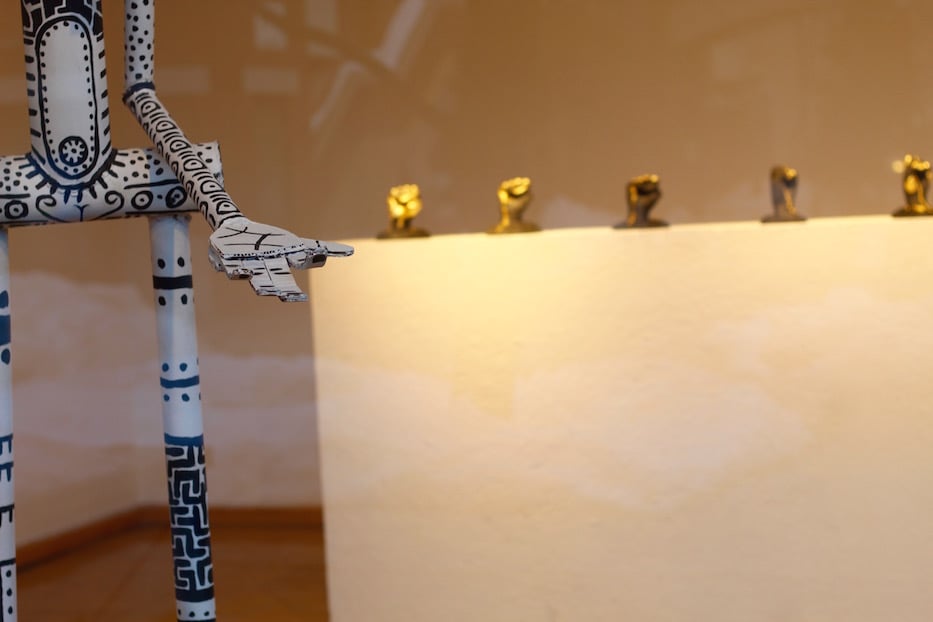 After a year defined by the twin pandemics of Covid-19 and racism, it is hard to look at them without thinking of New Haven itself, where the spirit of protest rippled through the city last summer and into the fall. Bookending them, a split wooden gallows pairs the American flag with a blue-and-white stencil of police tape. It’s a jarring reminder of how far the U.S. has to go in recognizing white supremacy as a public health crisis. The longer one looks, the more that they may realize that Kearson’s bricks are also part of this reminder: the letters are sinking into the plaster, putting the very notion of freedom itself in doubt.

The magic of the show, meanwhile, is how pieces interact with each other and with the viewer. Because it’s not always clear where one artist ends and another begins, it becomes hard to conceive of any one work without the others. Kearson’s bricks weave through the space, a sort of narrative thread that one can follow back and forth across the gallery. As they tie the works together, Ishmael marries civil rights and education with the traumas of police brutality and a pandemic that has turned being Black into another American comorbidity.

Ibo Mandingo’s mothers, meanwhile, hold the room. In an especially striking pairing, a matriarch’s lowered hand looms in the foreground as raised fists come into focus behind them. Together, the three sculptors walk a delicate line between a legacy of trauma and subjugation, and the creative work that is one’s birthright. It feels site specific on Audubon Street, where a number of historically white institutions have become part of New Haven’s past and present history of racism, urban renewal, and resource hoarding. 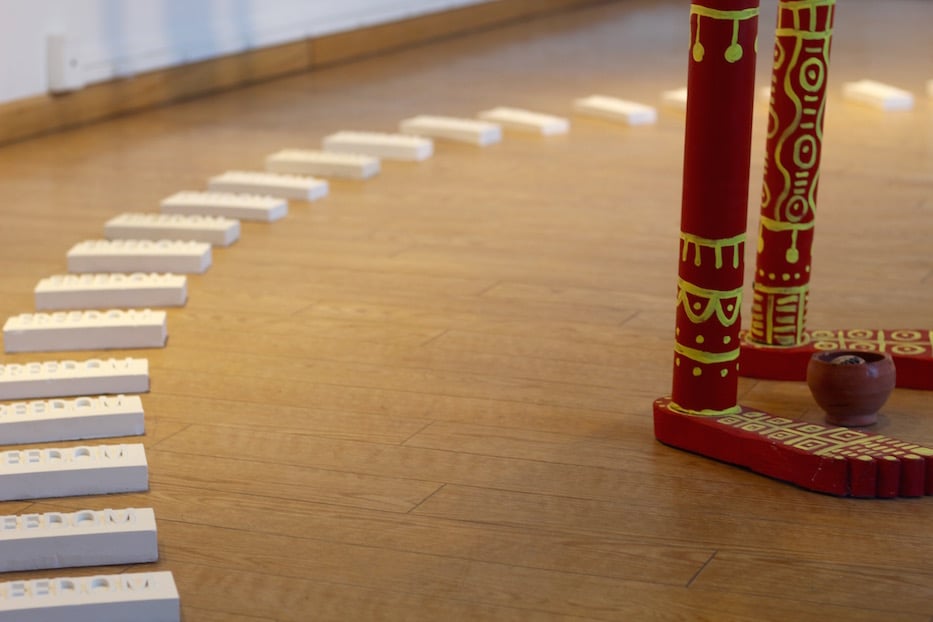 Holloway isn’t mincing words when she says that the work is meant to be seen from every angle. The installation asks viewers to move, crouch, straighten their spines, and look up towards the sky and then back down at the ground. Because everything is filtered through CAW’s windows, there are reflections of snowfall and snowmelt, nearby apartment buildings and the quiet street outside. Viewers may catch the sculptures in pink hue of dusk or butter yellow of dawn, and it’s worth going back in both.

“I am confident that each work on view in this exhibition will challenge art lovers to reimagine a world where beauty is limitless, and distinctions are celebrated—not used as a means to subjugate,” Holloway wrote. “Let creativity, beauty, and culture be seen, From Every Angle.”

Made Visible: From Every Angle runs at Creative Arts Workshop through Feb. 28.  An online panel discussion is scheduled for Wednesday Feb. 17, featuring the curator and artists. Click here to register.