Pride Center Goes “Beyond The Binary” 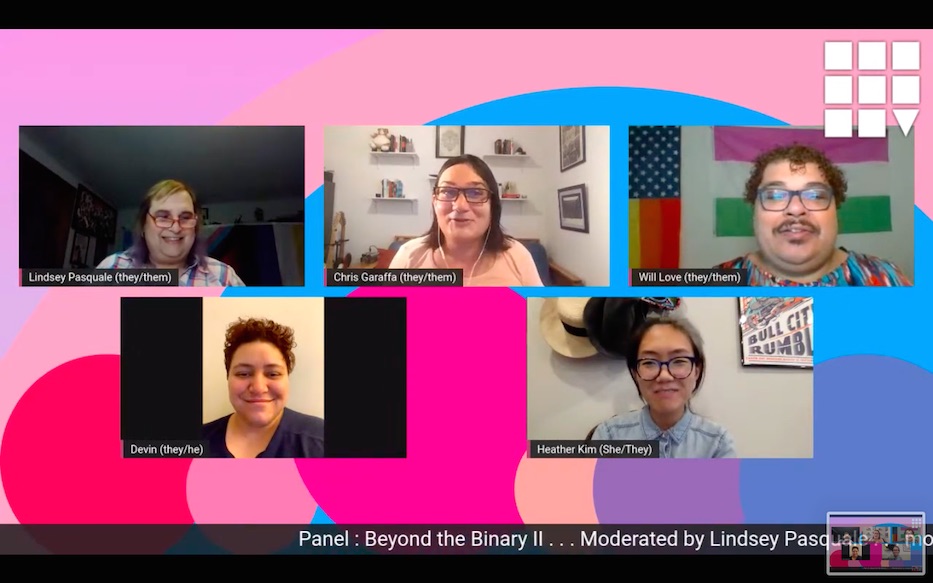 Self-discovery, self-expression, and affirmation were on the table last Thursday night, as five members of Connecticut’s non-binary community gathered virtually for Beyond the Binary II. Presented by the New Haven Pride Center as part of its Pride New Haven programming, the panel discussion challenged the idea that there is only one way to be non-binary.

The panel was moderated by Lindsey Pasquale, who co-coordinates the Transgender Adult Support Group at the Pride Center and moderates “Older and Non-Binary,” a Facebook group. Panelists included Chris Garaffa, a technologist, activist, and organizer based in New Haven; Heather Kim, a psychiatrist and former New Haven resident working with gender diverse youth; Danbury resident and activist Will Love; and New Haven resident and Pride Center volunteer Devin Atlas Marlow.

“I always felt strange about gender,” Garaffa said. “I finally found the word non-binary and that really opened things up…[It] explains so much of the last 25, 30 years of my life and how I’ve been feeling, and now there’s a name for it.”

Panelists each described how they discovered they were non-binary, which means not identifying exclusively as a man or a woman. Many of them came out later in life, after learning about identities outside of the gender binary from others in the community, especially youth.

Non-binary identities have existed across cultures and historical periods, Kim said. The identity is not new, but the language is. Despite their work with non-binary clients, they still had to break down their own misconceptions while navigating the coming out process for themselves.

They came to understand that not doing exactly what they saw other trans people doing—taking hormones, for example—didn’t mean they weren’t “trans enough.” They realized that not identifying as a man didn’t make them a woman by default. And they accepted that being in their twenties or thirties instead of their teens didn’t make them too old to come out as non-binary.

Pasquale, who came out publicly this past April, said that “this language just wasn’t out there” when they were growing up in the seventies and eighties. “I had the feelings but I had no way of being able to figure that out and digest it,” they said.

As Garaffa said, “It’s never too late to be true to yourself if you’re safe doing so.”

“I think sometimes people have an expectation that we know 100 percent of who we are when we say we’re non-binary and most of the time we’re just trying to figure these things out just like anybody else out there that’s a straight or a cis person. Nobody has a monopoly on knowing exactly who they are. It’s a process,” Pasquale said.

Love came out as non-binary as a gift to themselves on their 40th birthday. They’re still exploring what non-binary means to them—and to their loved ones.

Nail polish and dresses are objects, Love added—they don’t have a gender. In the online comments, a viewer writing as Melanie Testa agreed, saying, “Femmes are thems too!” Love urged family members to “take the gender out of it.”

“You obviously have a preconceived notion in your head of how you think I’m going to present," they said. "So, just remove that ... Gender? No thank you!”

Kim also pointed to the value of validation for non-binary folks. In the end, what’s most important is finding affirmation and acceptance for one’s true identity, and that’s where the wider community can make a big difference.

“The increased rate of suicide, self-harm, anxiety, depression, all these diagnoses that we see in trans youth aren’t because trans or non-binary people or kids are inherently pathological, or because trans identities are somehow liked to other psycho-pathologies, Kim said. “[It’s] because our identities are constantly invalidated. Imagine waking up every day and people tell you you are not who you think you are. That would mess you up, right? That would mess me up.”

Even though they don’t have their legal markers changed, Marlow said they specify their correct name and pronouns when spending time in a hospital or other medical setting.

“But in front of medical professionals it’s like that’s just a secondary name. A secondary set of pronouns. Something that is almost optional to use. But it’s not optional. My name is not optional and my pronouns are not optional. And who I am is not some topic of debate. I well exist,” they said. “Sometimes people don’t really think about how deeply that can affect someone … It really can hurt. And it shouldn’t have to.”

Marlow is thankful that the medical world is more inclusive than it used to be, but these issues crop up much more than they would like, they said. That happens here even though New Haven is one of the most queer-friendly places they know.

Using people’s correct names and pronouns is a gesture of respect. Kim called it a small step that costs nothing but goes a long way. For Marlow, it’s a principle they use to build queer community.

“I try to surround myself with as many accepting people as possible, because that is a very affirming experience for me, just to be around people who use my name and my pronouns,” they said.

Whether or not acceptance comes from without, Love asserted that it can come from within.

Watch panels from the New Haven Pride Center here and find out more about their work here.