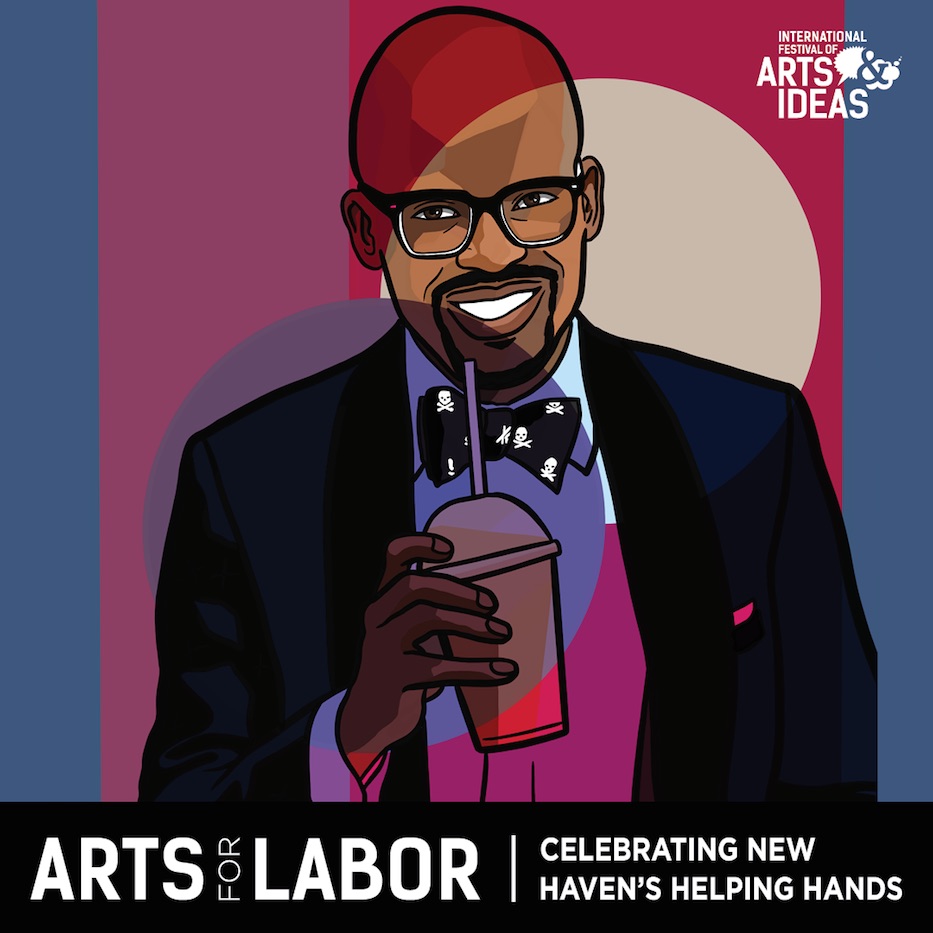 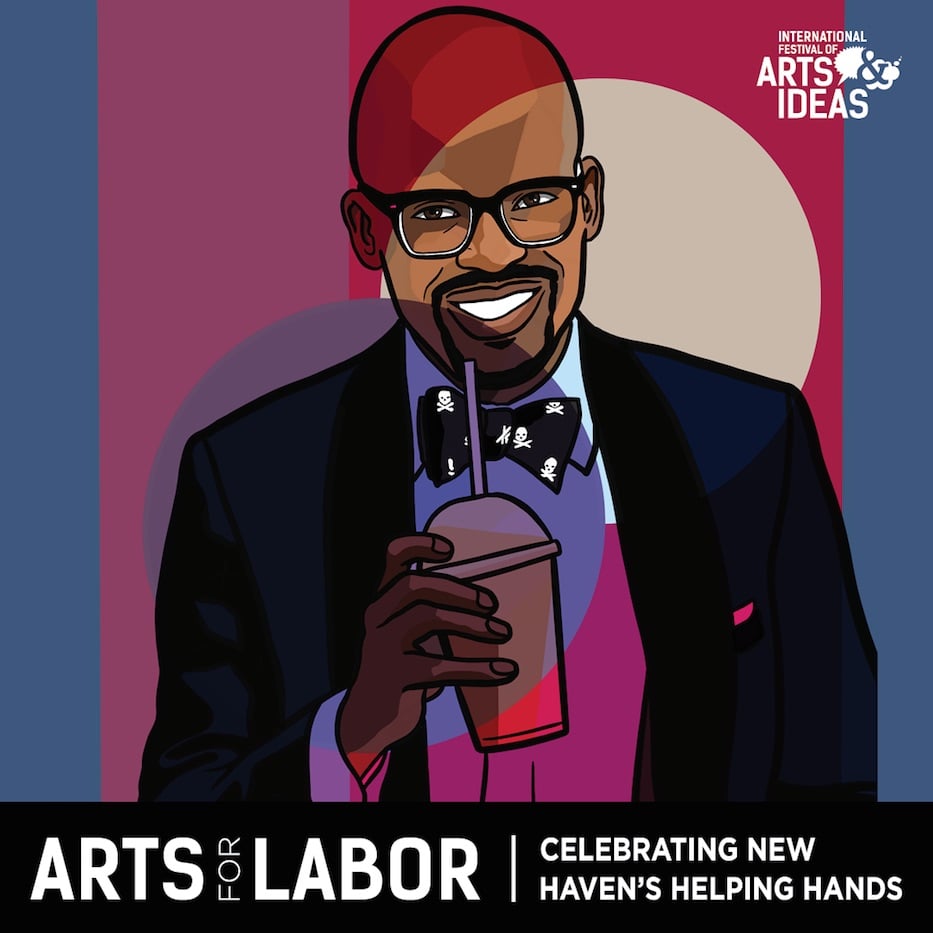 Artist Raheem Nelson pressed the play button, and suddenly jazz and hip-hop were flowing through his studio side-by-side. As he listened, he began his warm-up sketch—a dish of food—to shift his focus into work. Only then did he start on the task at hand: a sketch of an essential worker, whose beaming face now looks out over the New Haven Green.

Nelson is a digital artist, graphic designer, photographer and fashionista in New Haven, whose work is inspired by both a lifelong love for comics and his life in the city he has always called home. Earlier this fall, his work went up in downtown New Haven, as part of the International Festival of Arts & Ideas’ “Arts for Labor” series. Passers-by can see it on the side of 195 Church St., where the festival has its offices.

He ​​also served as Artspace New Haven’s program director for social media and storytelling for its Open Source 2021 Festival and recently completed illustrations in a workbook for the mental health awareness organization AP Femininity. Now, he’s going into a winter bustling with commissions.

“I’ve never been shy about talking about my influences,” he said in a recent interview. “And it’s my hope that other creative people have the courage to do the same.”

Nelson’s love for drawing reaches back to his childhood, all the way to his second grade class at West Hills Elementary School (now Conte West Hills Magnet School on Chapel Street). There, he became interested in drawing and started self-publishing comics. His classmates and teachers encouraged him to stick with it. As a student at Wilbur Cross High School and the Educational Center for the Arts (ECA), he planned to go into the comic book industry. 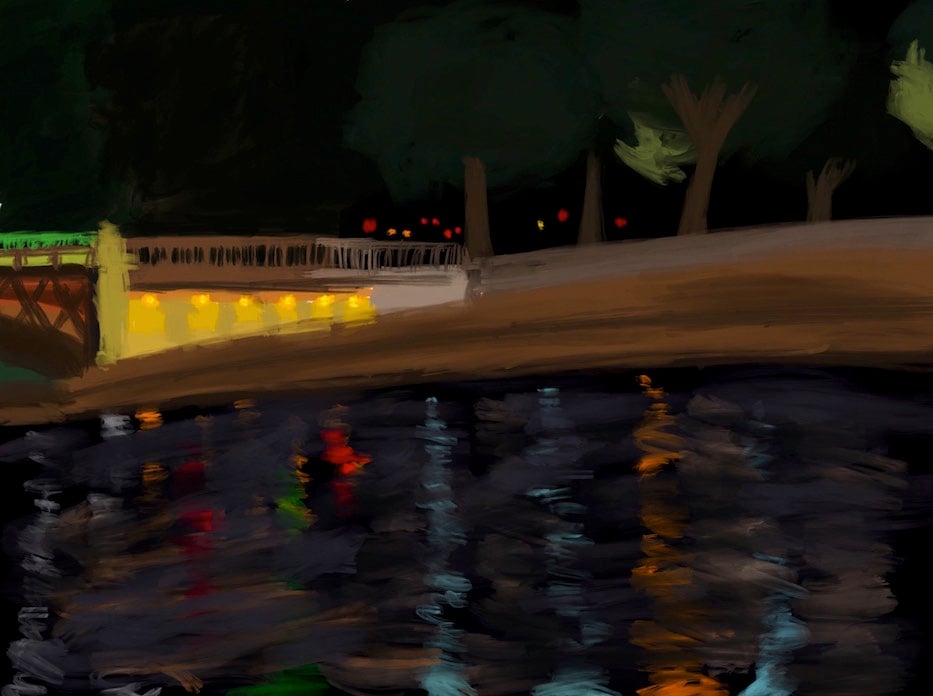 During those years, his sources of inspiration included comics in the Marvel and Archie universes, particularly Patrick “Spaz” Spaziante’s work on Sonic the Hedgehog and Sonic X, which he “used to read religiously,” he said. In addition to Spaziante, who he ultimately met, he drew inspiration from Jorge Colombo, a frequent illustrator for the New Yorker who later became a mentor. Nelson had the chance to meet Colombo several years ago at the Museum of Modern Art in New York City, and said the two “hit it off right away.”

While attending the School of Visual Arts (SVA) in New York, Nelson started to shift towards illustration and cartooning. The form gave him more flexibility to jump from project to project, he said. It became his visual foundation: he currently uses Digital Ink or ProCreate software when working. He also uses his photography skills to have a set reference. Many of his current pieces start as photographs, and then get soft, thick edges and crayon-like colors as they enter the digital realm. 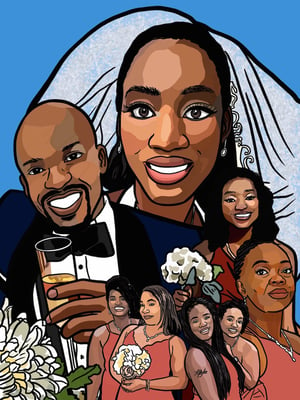 His love for comics comes through his recent work, from painting-like illustrations of Harkness Tower and the London Underground to bright images of cocktails and donuts where he’s experimented with sharp edges, smears of color, and varying levels of depth and flatness. Last year, at the height of the pandemic, he did a collaboration with Litchfield-based baker Amanda Glover, whose cookbook he later illustrated. Every work pushes him to try something different, he said.

His signature style has been years in the making, he added. Nelson started playing with digital artwork in 2008, when he was trying to self-publish his comics and started playing with Photoshop. In 2010, he switched to fully digital work from traditional cartoon illustration when the iPad came out. He “never looked back,” he said. By then, he was building a following in New Haven as “Ra,” the affectionate nickname by which many of his friends and collaborators still call him.

Since, he has grown his footprint through illustration, and held onto it as a way to get through the pandemic. During the day, Nelson is normally a special education paraprofessional in the New Haven Public Schools. During Covid-19, when he wasn’t able to work in the schools, he continued his artwork by reaching out to potential clients for illustration jobs and teaching classes remotely at Creative Arts Workshop. His work has appeared on buildings, in cookbooks, and in the pages of the New Haven Independent and at celebrations—including his own wedding, pictured above—among other places.

This September, he became the featured artist in Arts & Ideas’ “Arts for Labor” series, creating illustrations and time lapse videos of some of the essential workers who have kept New Haven running during the pandemic. There are figures including surgical ICU nurse Julianne Munson, holding out her stethoscope like an offering, musician and storyteller Nina Lesiga, security officer Victor Rosado and Nelson himself, looking out at a viewer with a bubble tea or soda in one hand.

"Essential work to me means providing a service with care that is necessary, impactful and makes a huge difference," he wrote in a caption with the self-portrait. He has also created time lapse illustrations of several of the drawings, to give viewers a sense of his process.

​​“Working with Raheem Nelson for Arts for Labor was beyond such an amazing opportunity,” said Yvette Hicks, marketing graphic designer for Arts & Ideas. “Being able to collaborate with a talented illustrator as the focal point of our overall look and feel was a beautiful way to showcase the amazing artists we have in our city. Aside from him being so great at what he does, his work ethic and excitement during this entire project (even now still after) really showed us his passion for what he does and is doing in our community.”

Going forward, Nelson will be teaching classes at the New Britain Museum of American Art. He also plans to continue his work with Artspace New Haven to start art business classes to teach students, or other artists, the integral ways to market your work. There is “a science to it,” he said.

“Even though I’m digital, I still use a lot of traditional techniques,” he said. "That's what I want to teach my students also, how to bridge the gap between traditional and digital."

Discover more of Raheem Nelson's work on his website. Emma MartinMooney is a junior at Wilbur Cross High School. This piece comes to the Arts Paper through an extended program for alumni Youth Arts Journalism Initiative (YAJI), a program of the Arts Council of Greater New Haven. This year, YAJI has remained virtual due to the COVID-19 pandemic. Read more about the program here or by checking out the "YAJI" tag.