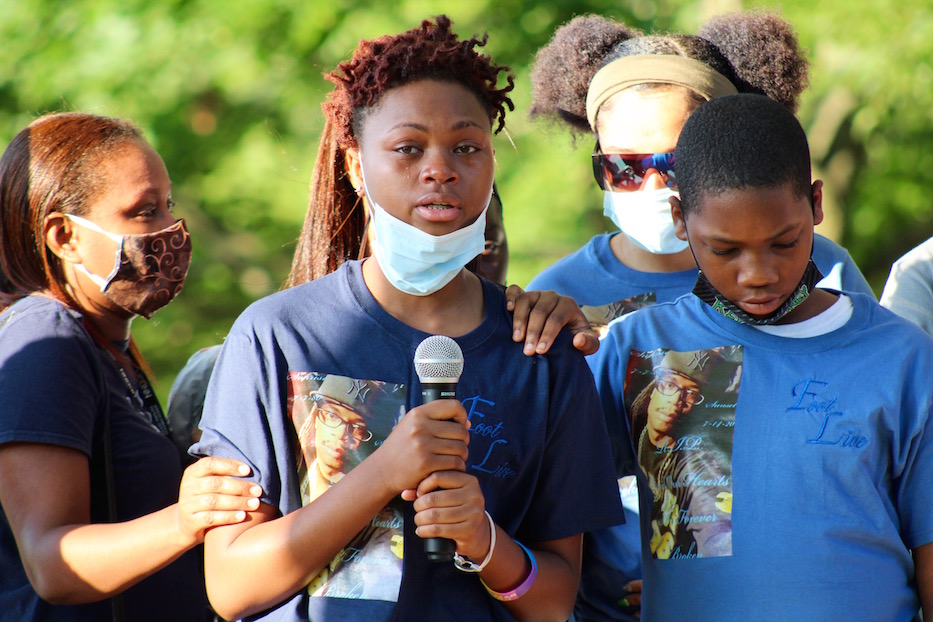 Faith leaders, elected officials, and members of Black Lives Matter New Haven spread that gospel Thursday night, during a rally against gun violence held at DeGale Field in the city’s Dixwell neighborhood. The gathering followed four shootings that took place Tuesday evening, in which two people were killed and two people were injured.

It came in the midst of the ongoing COVID-19 pandemic, a summer of protests, and just one  week after the city’s Board of Alders declared racism a public health crisis.

The rally was organized by Ice The Beef President Chaz Carmon and Whalley/Edgewood/Beaver Hills Alder Jill Marks. Between speeches, calls to legislative action, and fiery prayer, dozens of attendees took time to mourn 40-year-old Howard Lewis and 33-year-old Ibrahim Valentino Shareef Jr., both of whom died from gunshot wounds on Tuesday night. 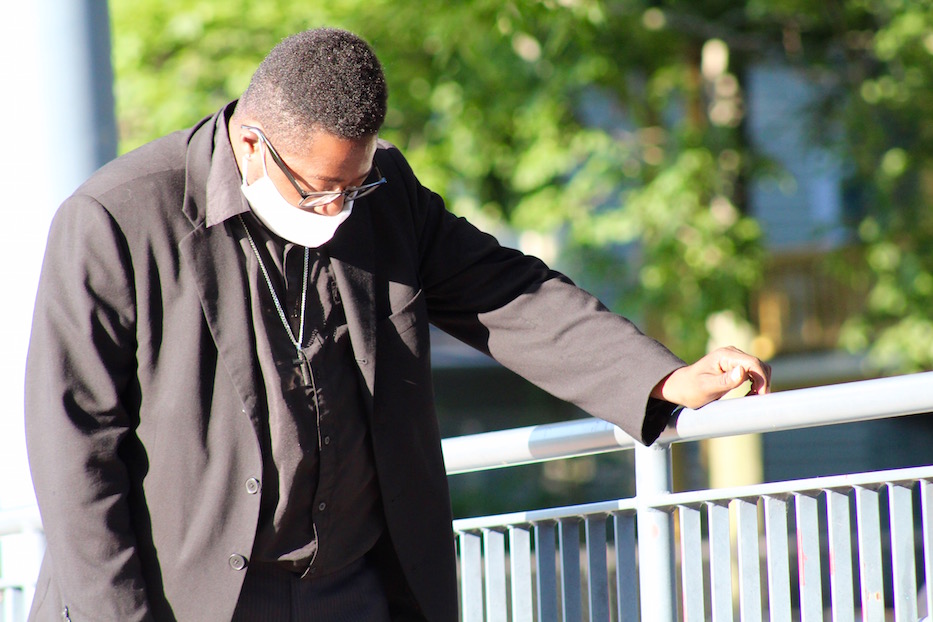 Several speakers also remembered 36-year-old Ricky Newton, who was killed July 10 on Rosette Street, and 19-year-old Kiana Brown, who was shot and killed as she slept at a friend’s home on Valley Street last month. She would have turned 20 at the end of July.

“Whoever did this to my father really hurt our family,” said Lewis’ eldest daughter, Hanaisha Lewis. I haven’t stopped crying yet, and my heart hurts so much.”

The Gospel Of Community

Over and over again, speakers agreed: this was not the reason they wanted to be gathering in DeGale Field, a sprawling expanse of green that sits off Goffe Street, across from the city’s abandoned Armory. Alder Jill Marks noted the importance of jobs, a theme that threaded itself through the night with remarks from New Haven Rising and several city and state elected officials.

Dori Dumas, president of the Greater New Haven NAACP, focused on the importance of jobs, from Yale University to small businesses and startups. She described the work that the organization is doing in voter and Census 2020 outreach, job creation, and economic development in the city. 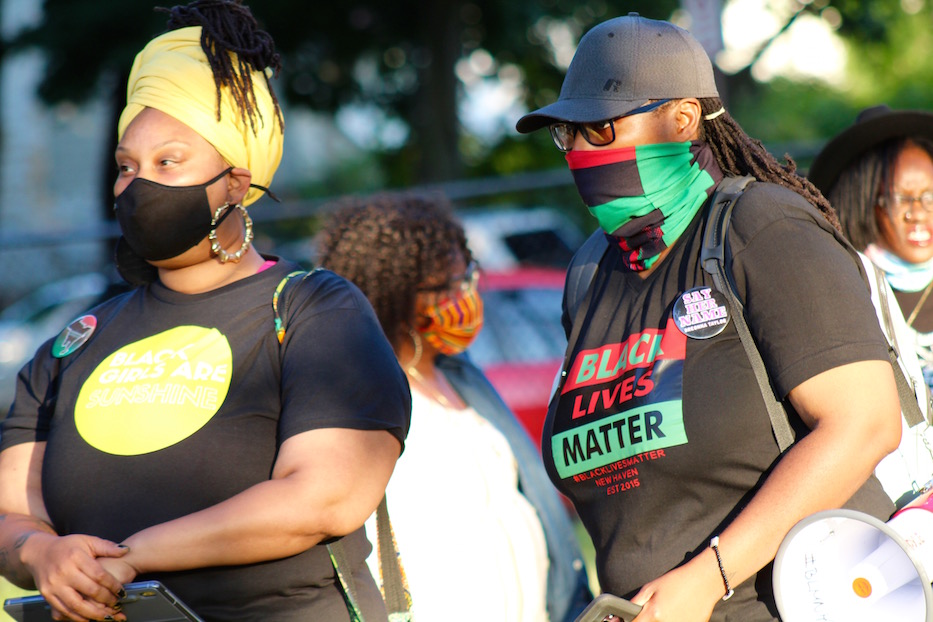 The poet Sun Queen, who runs Black Lives Matter New Haven with Ala Ochumare, Sy Frasier, Ashleigh Huckabey, and MiAsia Harris, noted the pushback that the group has been getting in the past months. She asked attendees to join the group in the fight for Black liberation, which has included marches and rallies, school backpack drives, and citywide collaborations with cultural institutions.

As they spoke, the sun-dappled park seemed to listen: a few kids rode their bikes across the grass. One family had put down a white sheet under a tree, and sat in its shade with lawn chairs.

State Rep. Toni Walker, whose district includes Dixwell, said that she would rather be celebrating “all the things we know about summer”—high school graduations, family barbecues, and long discussions that unwind slowly in the heat. Instead, she is watching her community—and the country—fight the dual pandemics of COVID-19 and racism.

She urged attendees to advocate for jobs, to advocate for safe education during the pandemic, to get tested for COVID-19, and to vote. She recalled the feeling of her neighborhood years ago, when she lived at 101 Carmel St. Neighbors knew each other. People rolled out their grills and barbecued together. Families got together and went to church on Sunday. She doesn’t see that same sense of community anymore.

“If ever was a time to stand together and say, ‘We ain’t taking this no more. It’s stopping now,’” she said. “We’re telling it to the people that want to keep us in corners.” 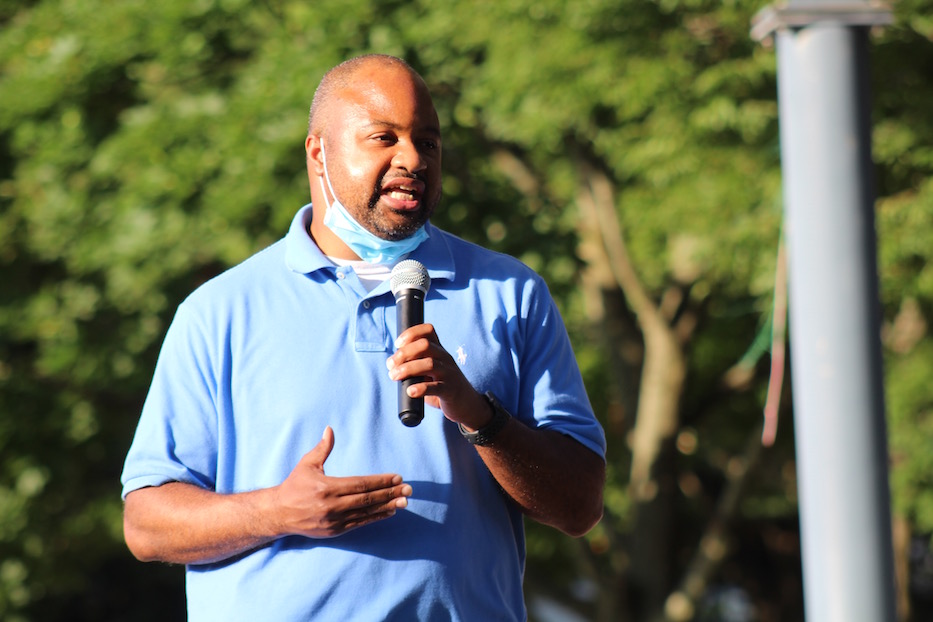 Rev. Steven Cousin, who is the pastor at Bethel A.M.E. on Goffe Street, recalled watching Tuesday’s events with fear and frustration, as he saw Lewis' family members multiplying outside of Yale New Haven Hospital, worried for their loved ones inside. He had a horrible sense of having been in the same place before.

He implored attendees to lock arms, open their doors, and work actively against an epidemic of violence spurred by poverty, racism, and centuries of oppression. He identified parallel battles: coronavirus, police brutality, and gun violence. Until those are attacked at the root, he said, “nobody is winning this war.”

"We are all that we need," he said. "We have the power. Take it back. Rely on each other. Pray for one another. And work together. It's an old cliché but it is true. United we stand. Divided we fall. What side are you going to be on tonight?"

The Gospel Of Grief 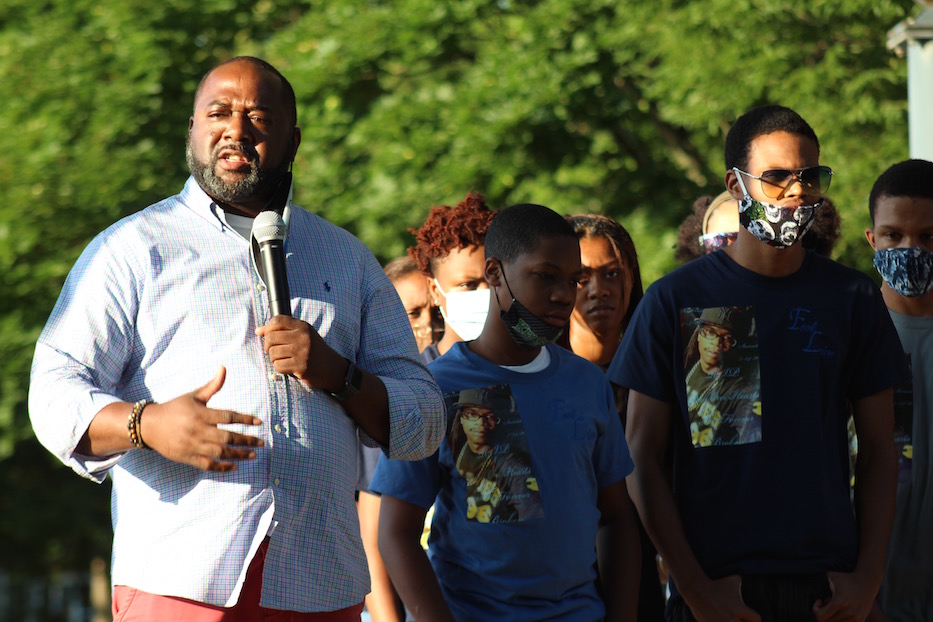 The Rev. D'Hati T. Burgess, pastor at First Church of God in New Haven, also urged attendees to take the grief they felt and turn it into collective action. He remembered a sense of helplessness he felt on the morning of June 17, when he received a phone call from his brother that his niece Kiana—his only niece, and a bright light in the family—had been shot while staying at a friend’s house on Valley Street in West Rock.

He spoke to attendees on the profound loss he feels within himself, knowing that his only niece will not live to see her 20th birthday later this month. After decades of preaching on compassion, he is living it with a chosen family—a family of mourners—that he hoped to never have to join.

Like Lewis’ eldest son, who is also named Howard, he begged attendees and members of the media alike to stop dredging up Lewis’ past as any justification for his death. 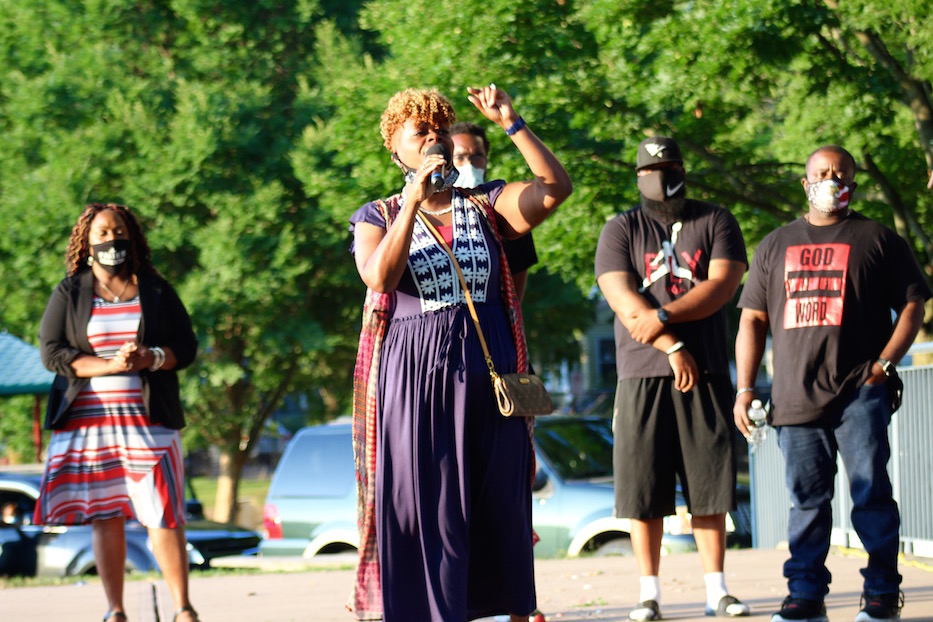 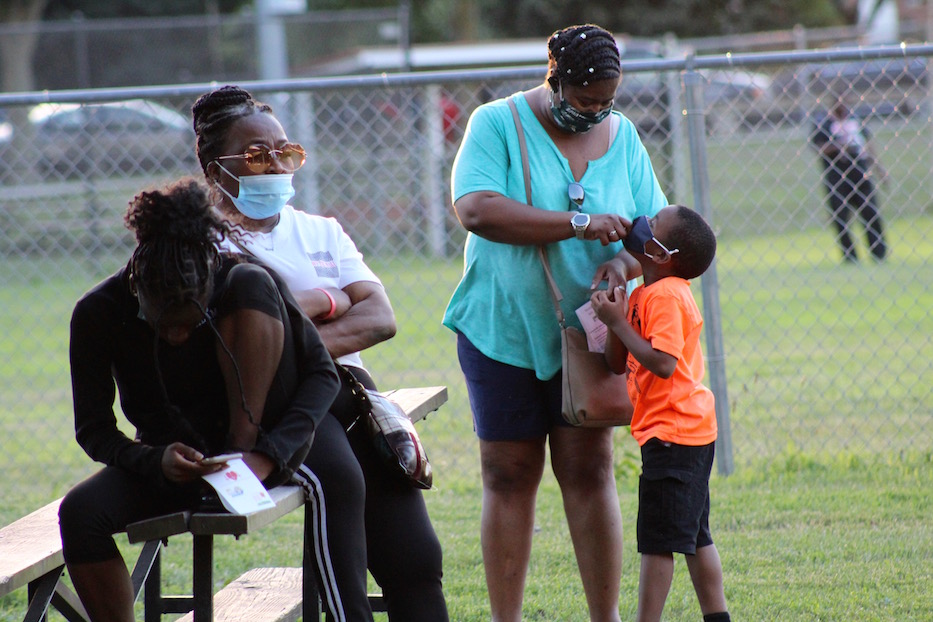 “To hear this young man stand up here and bleed with tears, based on someone bringing up the past of someone who was taken—it’s senseless and it should not happen,” he said. “If the truth be told, every last one of us got a past.”

While he lambasted attendees for allowing the church to “take the heat for every single thing,” he agreed that the answer was banding together. At a Bible study on Wednesday night, he informed members of his church that they would be spending more time outside the building, which sits at the intersection of Valley Street and Harper Avenue.

The Gospel Of Joy 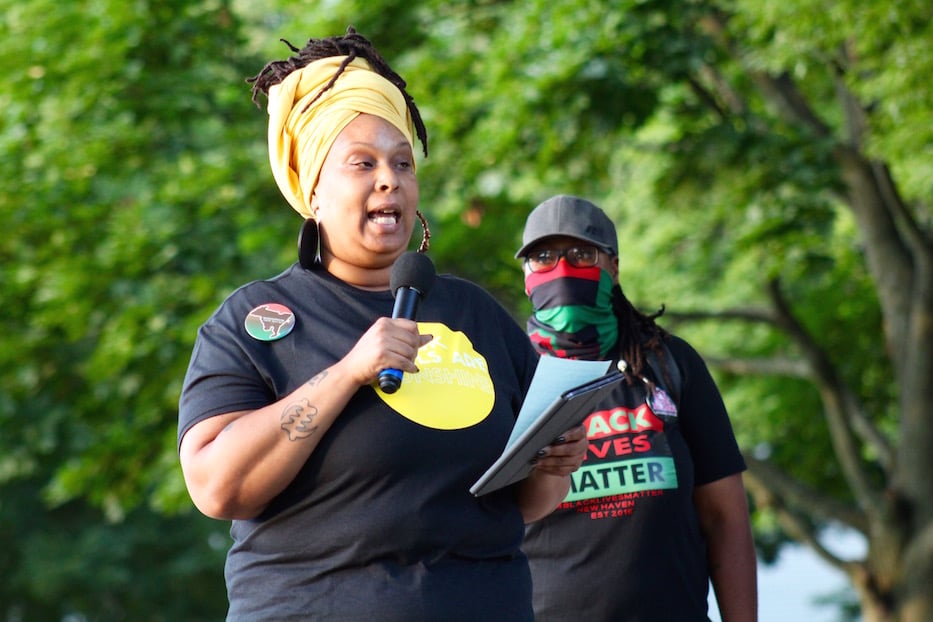 "To reduce violent crime, we must fight to change systems, and not demonize people," she said. "So yes, Black lives do matter. Today. Tomorrow. The years to come. They will always matter. So don't let racism and white supremacy, oppression, crowd that." 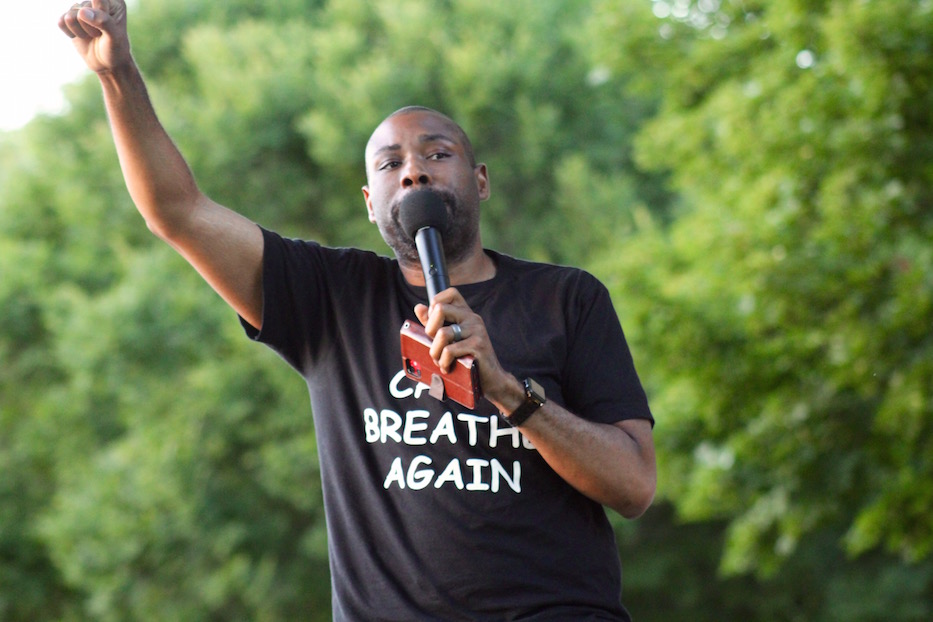 While the crowd had thinned, those that remained held on to her words, booming across the corner of the field. She called for job creation, fully funded schools, police accountability, and justice, from an end to the carceral state to an end to white supremacy itself.

“We want to feel safe in our communities,” she said. “Accountability. We want to focus on problem solving and restoring our village. We want Black joy. We want our community to look like and feel like Black joy and Black magic.”

“But it’s not going to take one organization, one activist,” she added. “A movement is going to take all of us. For Black joy, for Black liberation to come.”