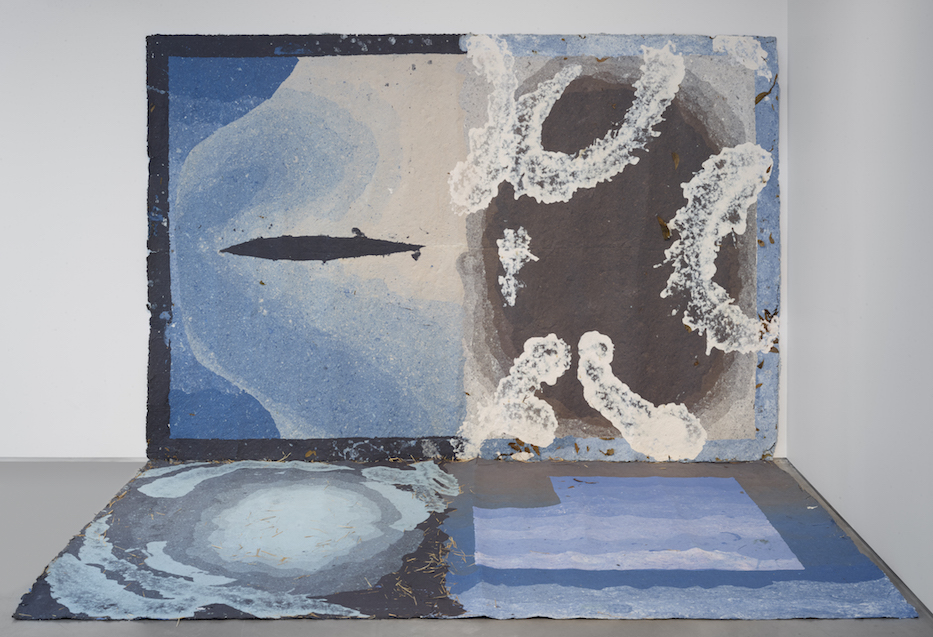 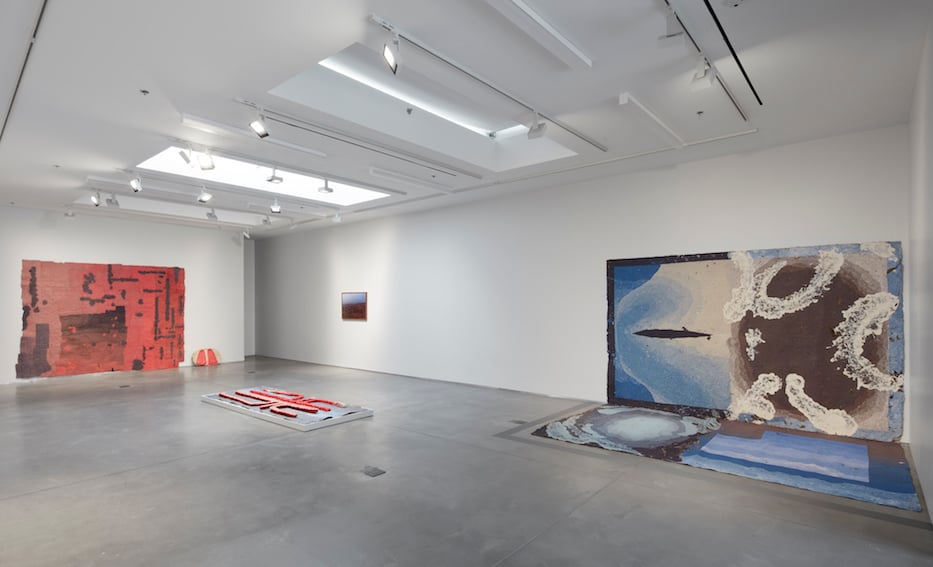 Near the doors to NXTHVN’s gallery, two massive sheets of handmade paper invite viewers to another realm. One piece is installed on the wall, while the other half rests on the floor in front. Together, they function as a doorway to an imaginary space, evocative of the sea and sky. The pale blues and abstract shapes of Hong Hong’s work The Wet and the Dry: Holding and Grasping I recall the soft waves of an ocean or the undulating shades of a sunrise.

Small fragments of hay and darkened leaves embedded within the skin of the paper are bits of physical evidence that transport a viewer to the exact environment where the work took shape—outside, under the blaze of summer.

Curated by NXTHVN Fellows Marissa Del Toro and Jamillah Hinson, Let Them Roam Freely opens new worlds through the creation of portals—poetic ruptures of space and time that pull from personal, mythological, and historical details. Both ​​Hong and Detroit-based artist Darryl DeAngelo Terrell were commissioned to make works on or near the Dixwell space for this two-person exhibition, on view through May 15.

For Hong, this exhibition marks a new way of working. Before her stay in New Haven, Hong had made all of her work outdoors, following a similar ritual of pouring and spreading moistened paper fibers onto large-scale frames. The paper hardens as water evaporates through a slow process of sedimentation fueled by the heat of summer. 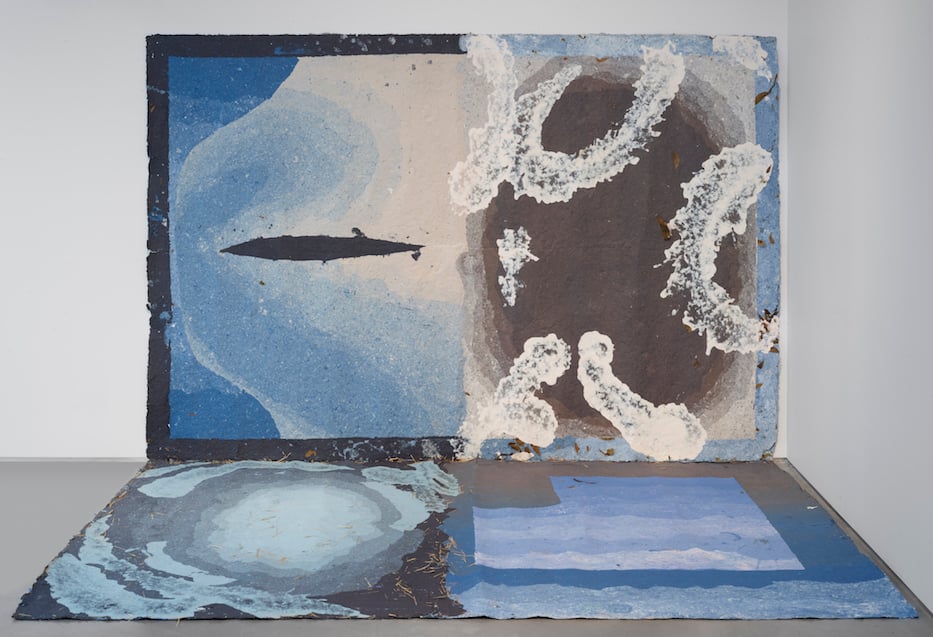 In the dead of winter, Hong needed to move indoors because mid-January temperatures would freeze her paper pulp. Within her makeshift studio at NXTHVN, she was forced to use the weight and strength of her body in place of gravity and heat.

Terrell also considered new facets of their practice for this show. Research into their genealogy informed the start of their series, A Way to Get Gone (2020-present), a body of work that envisions flight as a form of liberation. Through an idiosyncratic process, Terrell concocts escape routes for Black people that have been set in various locations around Detroit, Michigan, as well as Dakar, Senegal.

Terrell honors their ancestors through the process of invoking their portals—that is, shimmering vortexes that appear within the frame like a doorway to another dimension. Their most recent portal was sited in a public playground in the Dwight neighborhood of New Haven. To the right of a rainbow arch, tiny warm lights form a golden web. As with the other works in the exhibition, Terrell titles the work after its coordinates, forcing a viewer to investigate the significance of the location. 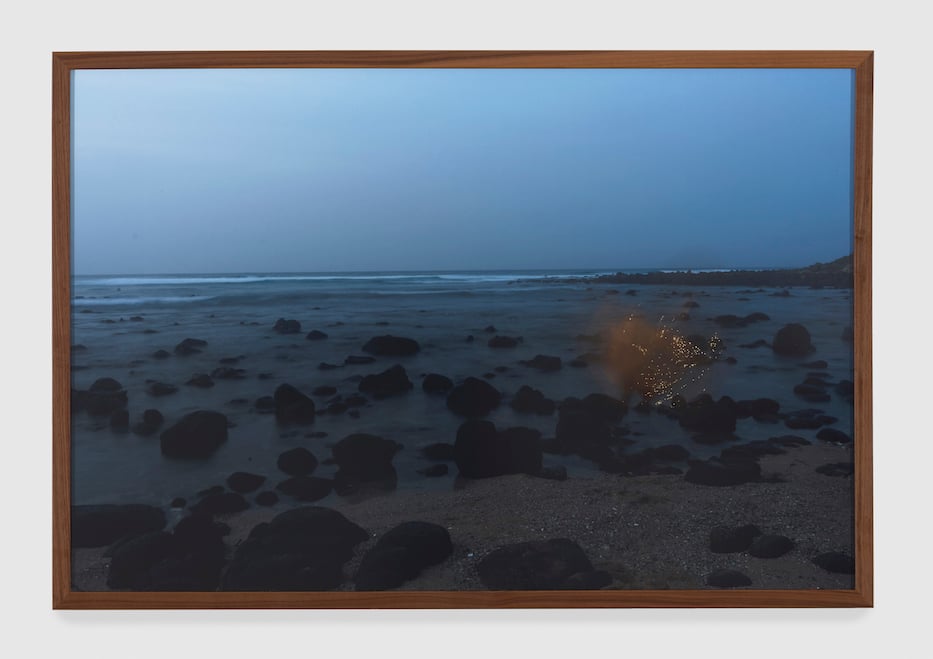 Previously a portrait photographer, Terrell began the series as a way to move beyond this genre. The images still recall the figure in this series through its absence. Their mystical openings are often positioned against banal imagery: a row of apartment buildings, a modest yellow house, and a shoreline dotted with boulders. Through a performative process, Terrell uses their body to fabricate the works in this series, and sometimes small bodily fragments remain within the composition.

During the artist talk following the opening reception, Terrell explained that the imaginative flickers of light are the result of documenting their dancing body under a shiny, gold sheet of fabric. A strange haziness of Terrell’s physical prints is a minor distraction from the allure of their imagery. Nonetheless, the imaginative nature of the series trumps any small flaws.

Hong’s commissioned work also traces the movements of her body. The Wet and the Dry: Holding and Grasping II hangs vertically on the walls of the space adjacent to the floor where she used the weight of her body to squeeze the water from the paper pulp. She includes dust and hair in the list of materials alongside the repurposed pieces of red and black paper for this piece.

From across the room, this mostly red and black piece reads like a landscape—maybe one more akin to the densely populated cityscapes of her childhood in China. Like Terrell, Hong works with paper as a way to connect with her ancestors, and the overblown scale of her works roots her process in a form of circumambulation, the act of circling a relic or holy site.

The more sculptural elements within the exhibition mark another divergence for Hong, whose works were previously more two-dimensional. In the center of the gallery floor, a symmetrical set of red bodies rests on top of a larger sheet of bespoke paper. With its alternating bands of muted blues, the flat paper contrasts the three-dimensional components in color and form. These sculptural aspects feel akin to preliminary sketches of new ideas, the first shaky steps of more resolved plans that will follow. Hong holds the exact meaning of this shape—perhaps a pictogram or a sacred body—to herself.

Let Them Roam Freely hinges on the movements of the makers. At a time when many have become more aware of the confinements of place imposed through pandemic-related restrictions, curators Del Toro and Hinson have joined these two artists to revel in the possibilities of unrestricted travels, sliding across time and place. Terrell and Hong tie their practices to performance through individualized iterations of choreography. Encountered together, their visionary works transport viewers beyond the believable.

Let Them Roam Freely runs through May 15, 2022 at NXTHVN. To view the online exhibition, visit its website.