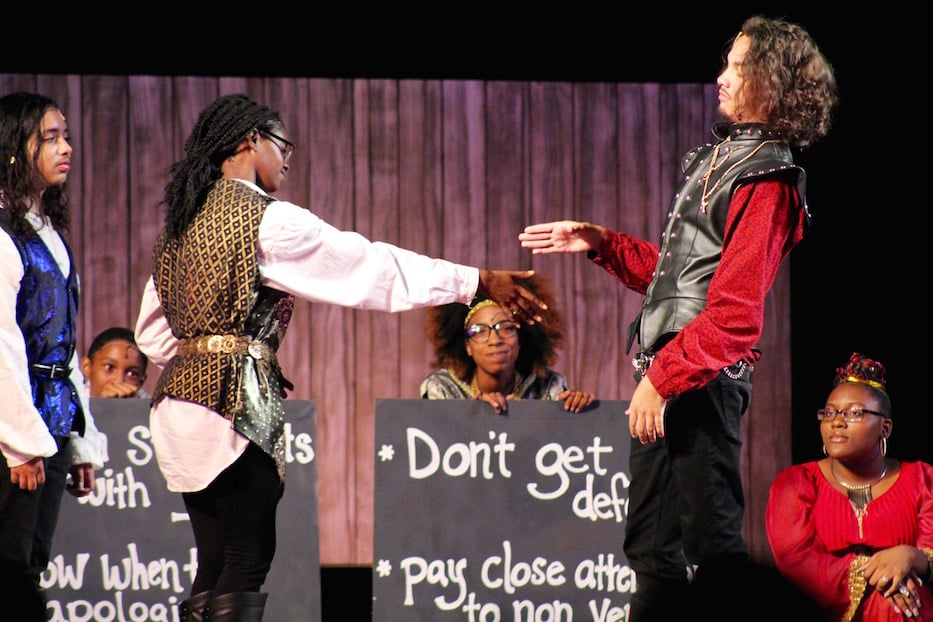 Onstage, Mercutio was dying in his friend's Romeo’s arms. His breath became ragged. Lights dimmed to a sickly green. His killer, the hot-blooded Tybalt, lowered a shimmering, transparent veil over his head. The moment—two lives ending, and forever entwined in an act of violence—was enough to knock the wind out of the Edgerton Park audience.

Could it have ended differently? With a series of de-escalation techniques, a New Haven group of teens was willing to try.

Last weekend, a series of artistic risks paid off as Elm Shakespeare and Ice The Beef brought their adaptation of William Shakespeare's Romeo & Juliet to Elm’s inaugural Youth Shakespeare Festival in Edgerton Park. After months of rehearsal and performances on the New Haven Green in June, the play grafted fair Verona right onto present-day New Haven. 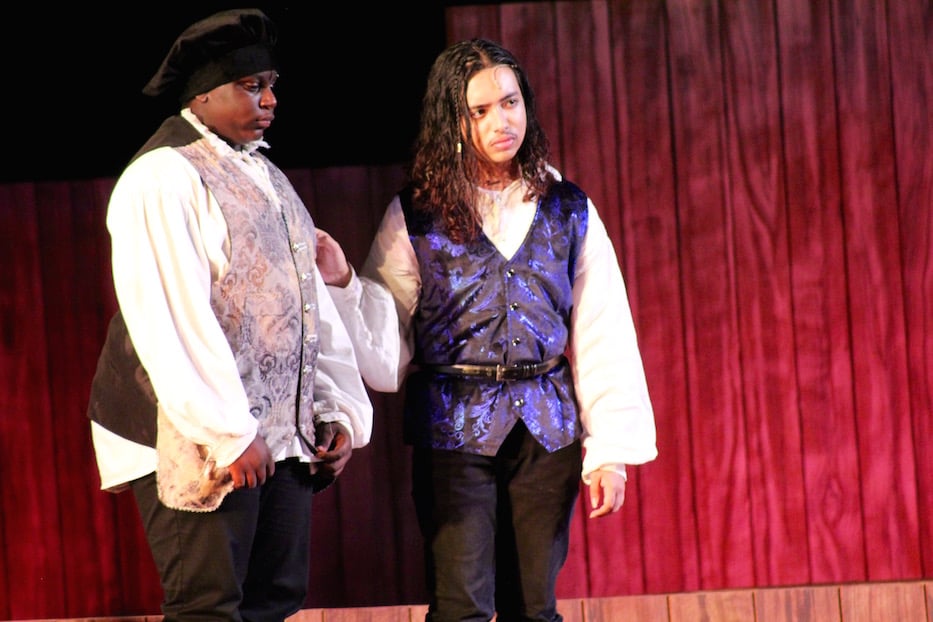 Friday through Sunday, actors presented a full run-through of Shakespeare’s original text, then stopped at the end to “ice the beef”—to resolve conflict without deadly violence. Working together, they turned back the clock, assessing how and when characters might have acted differently. The approach pulls from Agusto Boal’s Theatre of the Oppressed, a technique that opens a work of theater up to the audience, and then presents scenarios that tie it to the present.

As actors glided onto a clean, two-story set to the spare, persistent beat of a drum, they made the space their own. First the stage was a bright dance floor, with low-hanging paper lanterns and fir trees that glowed silver in the background. Then it was a grassy knoll outside Juliet’s bedroom window, on which an entranced Romeo watched his love with soft, doe-like eyes. Then the young girl’s bedroom, where her nurse (Catherine Wicks) was ready to mine the text for all its absurdity and humor. 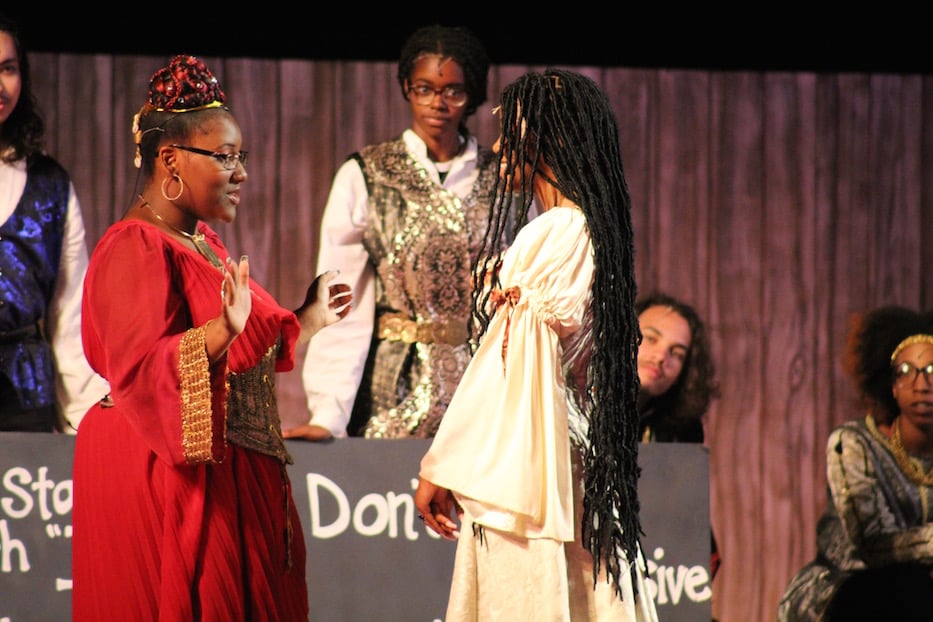 Lady Capulet (Alonna Beard) and Juliet (Zahra Hutchinson) talk out why she doesn't want to marry Paris in an alternate scene.

At every turn, characters brought it to life. Just as they did during rehearsal, Camacho and Hutchinson entered the stage with a kind of crackling electricity, treating the very act of touch with a holiness one might expect over a year of living in a plague. With equal parts fury and immense vocal control, Alonna Beard gave Lady Capulet the permission for her character to be a Black matriarch, with agency and power that nearly stops the violence at the show’s outset.

Early in the play, she played “A crutch, a crutch! Why call you for a sword?” for its outrage, making it clear that she did not want violence to show up uninvited at her event. It was chillingly relatable for a place where gun violence has reached city parks, greenspaces, and community gardens in the past several months.

Even Friar Laurence (James Jones, Jr.), a character whose missteps are partly to blame for the show’s macabre end, buzzed around the stage with a kind of urgency that made viewers realize how much the show is still with them. When he handed Juliet a vial of sleeping draughts, he lifted his arm with a tentative grace, aware that it was the ballet of an almost-assassin. 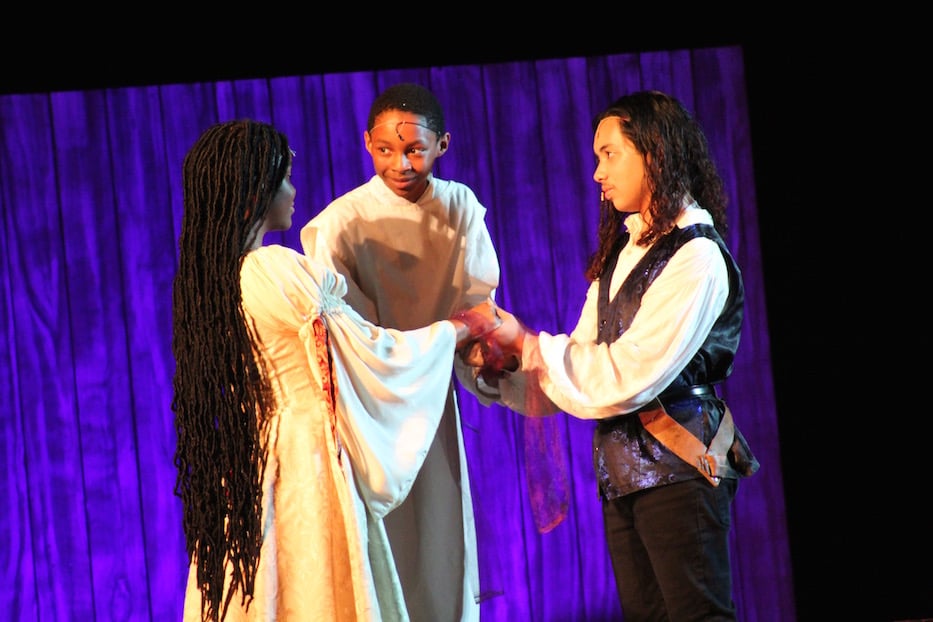 As actors helped with scene changes, a steady soundtrack that ranged from Hamilton to Lionel Richie placed the work somewhere between 1590, 1750, 1980, and 2021. In between, Elizabethan lines morphed at times into hip hop (“Down with the Capulets! Down with the Montagues!” turned into a hook) and silence and stillness, a rarity in the show, took on an added weight.

Whatever argument there is for leaving the play alone—the entire point of Romeo & Juliet is that audience members recognize how impulsive and short-sighted these star-crossed lovers and their families are—actors quashed it. They were not just in Verona but also in New Haven, where residents have seen 18 homicides in the first eight months of the year.

In one of the most affecting moments of the play, actors placed shimmering, see-through veils over the heads and shoulders of murdered characters, their faces visible beneath. Per a choice from directors Sarah Bowles and Justin Pesce, both the murderers and ancillary characters placed the veils—showing how one act of violence can rip through a community on both sides of the conflict. 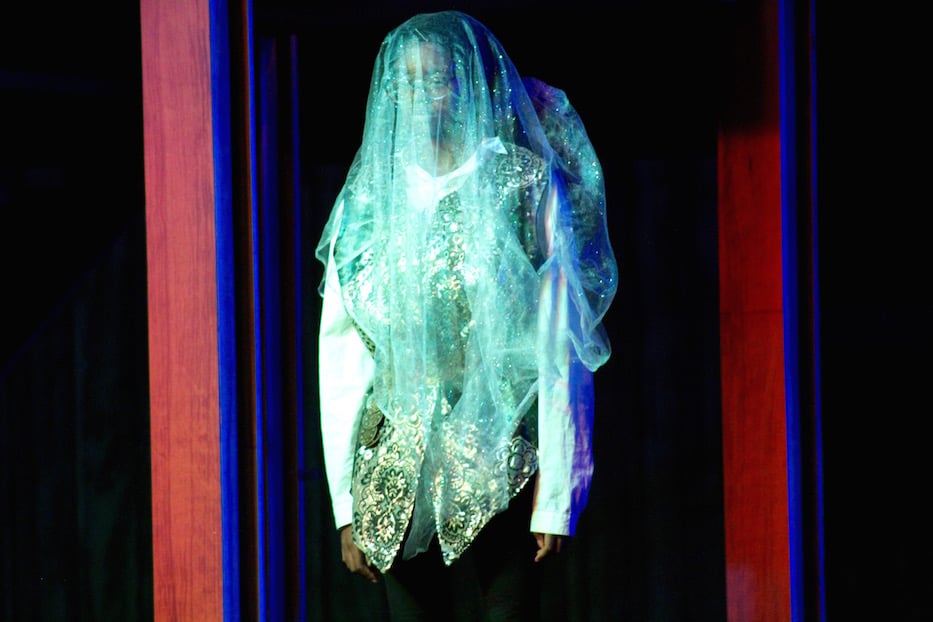 Mercutio after his death. Lighting design by Jamie Burnett.

When they moved joyfully to the beat of Richie’s “All Night Long,” when they laid shimmering veils over the freshly dead, when they attempted to break up fights, actors turned the work into a story that belonged to the Bard, and to the audience, and to them.

No guns appeared in the play, a testament to a country where Black people are murdered by law enforcement for holding plastic toys, cellular phones and packs of candy.

In that way, Romeo & Juliet is a perfect show for Ice The Beef to interrogate. This is the story of a bunch of teenagers and their child-like parents who are so hot-headed, so lovesick, and so used to carrying weapons on their bodies that they don’t stop to take stock of what they’re doing. They can remember why they want to get it on, but they can’t remember why they started fighting in the first place.

It worked, then, when Benvolio-turned-narrator Antwain Johnson stepped forward, and announced it was time to flip the script. Behind him, actors held signs with de-escalation techniques, from “Speak from the ‘I’” to “Show that you can compromise” and “Don’t get defensive!” 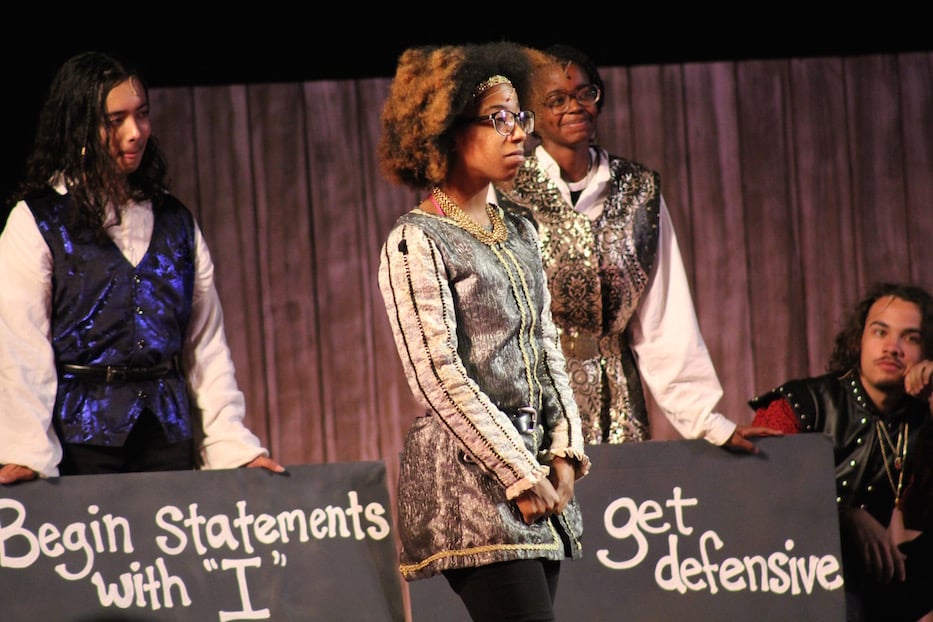 “What if Paris was a bit more perceptive?” an actor asked. Laughter bubbled up from the audience here was a flurry of activity on stage. Actors rearranged themselves.

“Actors, are you ready!” Johnson asked as a shout went up from the stage.

“Audience, are you ready?” he asked. Another cheer went up from the crowd.

Suddenly, Paris was staring off into the reflective deep of the chapel when he heard Juliet whispering to herself. He lifted his head, still as a stone as he listened.

"O shut the door, and when thou hast done so, Come weep with me, past hope, past cure, past help!" Juliet cried out. Tears welled up at the edges of her voice.

“Shut the door?!” exclaimed Paris. “We?! What are we weepin’ for? Are we not gettin’ married on Thursday? Early?”

Juliet pulled back, her face twisted. “I am so sorry,” she said. “You were not meant to hear that.”

“So we’re keeping secrets now?” Paris retorted. A wave of laughter went up from the audience.

“I’m so sorry, this whole marriage was my mother’s idea,” Juliet said. 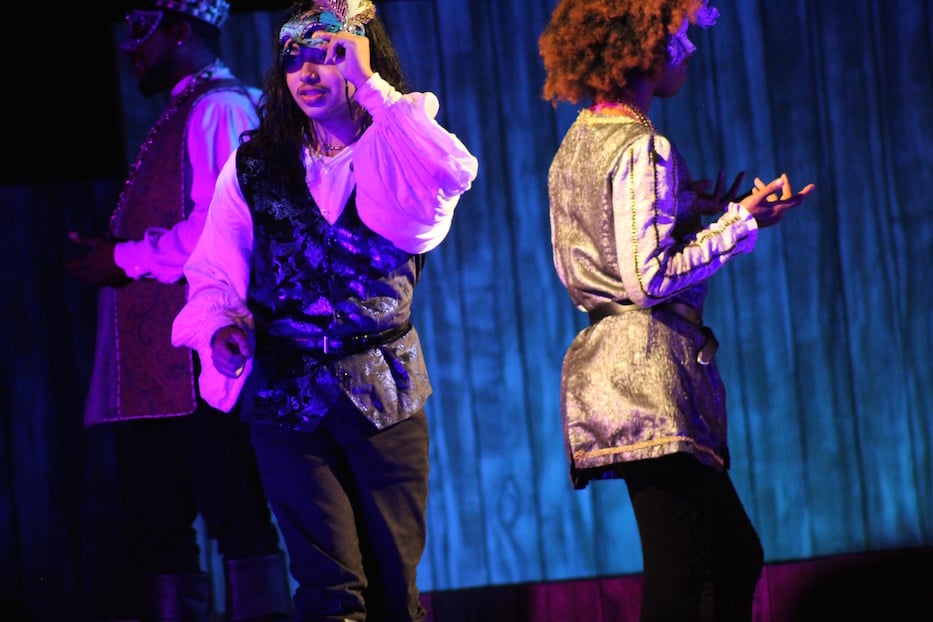 Romeo at the Capulets' ball.

“An you’re just now telling me about this?!” Paris said, eyes narrowed.

“Yes,” Juliet said, her body now crumpled. “I’m actually in love with somebody else.”

Friar Laurence crept back onstage. “So basically, I was supposed to give her a small potion,” he said. “A small, glass …”

“Potion? For what?” asked Paris. When Laurence stalled, he stomped his foot. “Get to it, get to it.”

“So basically, it was supposed to make her look … dead,” Laurence said, to more laughter from the audience. “Deceased. Like she kicked the bucket.”

“I’ve heard enough,” Paris said. He turned to Juliet. “You came to me with Friar Laurence to do all of this just so you didn’t have to tell me that you were in love with somebody else?”

The audience was cackling by now. A few people clapped at Paris’ newfound sharp tongue.

“You know, it’s ok,” he said. “I’ve heard enough. I don’t think this is something I want to be involved in anyways. You go ‘head and enjoy who you are in love with, and I’ll go find somebody who will be in love with me.”

The audience clapped, stood and bellowed back as actors ended the scene.