“Salt Pepper Ketchup” Takes A Bite Out Of Gentrification

Philadelphia—In one corner of Superstar Chinese-American Takeout, CeCe is ready to fight. She has taken off her jewelry and pulled up her hair, anointed herself with vaseline, called her cousin in for backup. Across the dirty tile floor, a thief named Paul shakes in his tennis shoes and cotton t-shirt. He is tall and skinny, an Ivy League graduate who has stolen so much more than CeCe's $20.

He raises his arms in defense as CeCe prepares to make her move. From her right hand, a bag of two dollar apples swings like a pendulum.

This is the world of Josh Wilder’s Salt Pepper Ketchup, on at Philadelphia’s InterAct Theatre Company through November 18. First conceived and performed as a one-act at the Yale Cabaret in 2015, the play has grown into a full-fledged, two-hour work with new characters, interlocking storylines and an explosive ending. The play is co-produced with the Passage Theatre in Trenton, New Jersey.

Written by Wilder and directed by Jerrell L. Henderson, Salt Pepper Ketchup is a play about a lot of things—gentrification and food security, immigration, white male fragility and tribalism, women who build worlds only to be stripped of their most basic rights. But mostly, it’s a play about placement and displacement: who loses their land when predators move in, and when it’s okay to take matters into one’s own hands.

Set in Philly’s Point Breeze neighborhood, the play begins during Barack Obama’s presidency, as gentrifiers move in on the neighborhood’s east end to build a food co-op. Around them, property values are already skyrocketing, displacing families that have lived in the area for multiple generations.

We’ve met these types before: well-intentioned white people who have not thought to ask the neighborhood’s longtime residents what they’d like to see, and are eager to christen the area “Newbold” with kombucha and bushels of bright green kale. They disclaim their white privilege prematurely, then fail to apologize as they use it to make the neighborhood prohibitive for those who have always called it home.

The question that comes with their arrival, of course, is what’s the system that’s allowing this? And what are the lengths to which one should fight it? 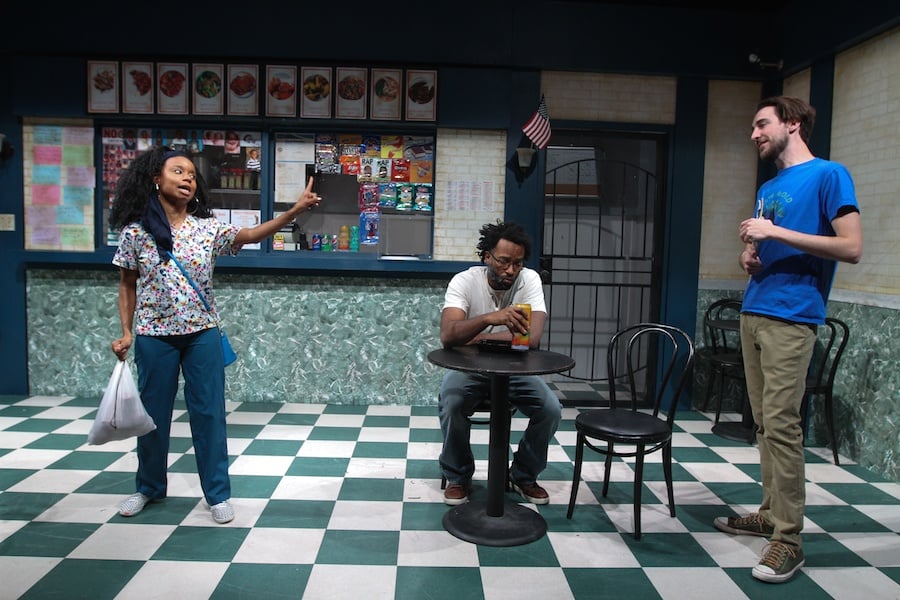 Wilder, who grew up in Point Breeze, has chosen the perfect vehicle to tell this story: Super Star, a Chinese takeout joint with bulletproof glass and a pull-down grate in which the entire play unfolds. Inside, immigrants John and Linda Wu squeak by, serving the neighborhood’s poor Black residents with Americanized dishes fried in peanut oil and chicken grease and served with Arizona Green Tea and premixed lemonade.

This isn’t a beautiful world, but it’s theirs (a perfect set design by Colin McIlvaine): walls permanently stained with grease, tiny American flags, a thick sheet of bulletproof plexiglass that stands between them and their customers. Maybe they’ve made inroads—a fleet of the neighborhood’s baby pictures decorate the plexi—but it’s not clear how deep they go.

On the other side of the divide, Point Breezers are just trying to make it, too. There’s Tommy (Mark Christie), Raheem (Jaron C. Battle; an entirely new addition from 2015’s performance) and Boodah (Richard Branford), a local “old head” whose wisdom is revealed drop by drop, just like the spoonfuls of soy the Wus ladle over everything. CeCe (a winning Kendra Holloway) is the Wus loyal favorite, shelling out hundreds per month as she tries to do the best she can by her son.

And then there’s Paul (Justin Pietropaolo), a doe-eyed white kid who drops by several times each day to drop off pamphlets on the co-op, trash talks Linda Wu’s food, and sticks out like a sore thumb. As he sways CeCe to join the co-op—a $100 annual commitment for a grocery store that doesn’t take SNAP—he makes more enemies than he can know. But he also catches Linda’s ear, making her think twice about what exactly he is peddling, and whether gentrification is the pervasive evil her husband makes it out to be.

What follows is a chain of events that feels violent, gut-wrenching, and inevitable. When Tommy declares “there’s a war going on and you gotta pick a side,” he’s not kidding. With heavy nods to Spike Lee’s 1989 Do The Right Thing—it is arguably the sequel we never knew we needed—Wilder digs into gentrification, and the long-term consequences of a system that has always favored white supremacy.

He doesn’t pull any punches: Paul is as entitled, blind and unctuous as they get (Pietropaolo does irksome very well), and some of the writing is so spot-on (“what you put in your body is a form of social justice!” Paul declares) that it’s cringeworthy to sit through. 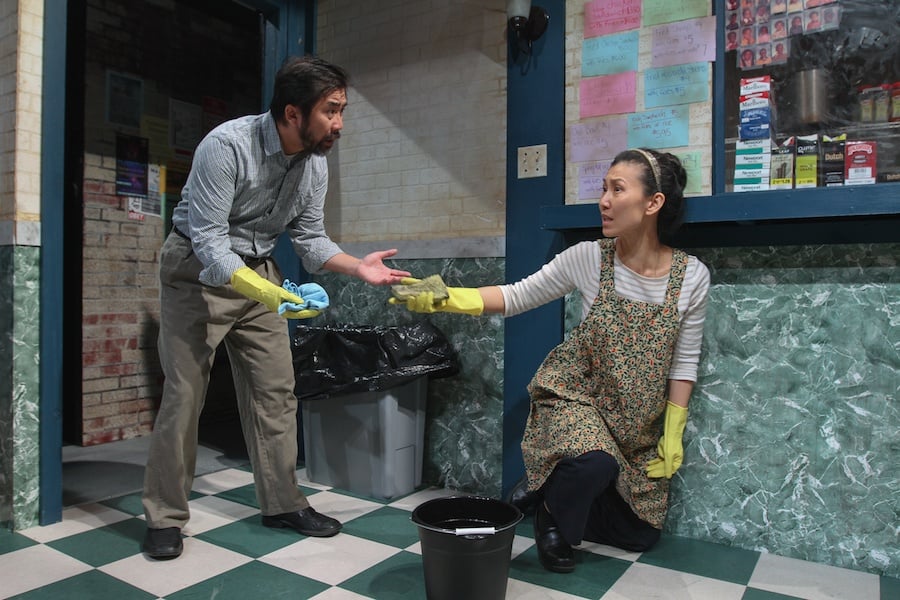 But Wilder also weaves a story that is not without humor or nuance. We warm to Paul when he exhorts the value of nutritious food, but cool to him when that food is too expensive for any of the neighborhood’s longtime residents to afford. We root for CeCe when she takes on the system, but want to shield her from its consequences before it’s too late. We don’t like Paul’s outreach-tasked employee Megan (a talented Miriam White) when we first meet her, but feel for her when she too is a victim of his fragility and rage.

And we are predisposed to hate the co-op—itself a character in the show—until we see the small role it can play in food sovereignty and community engagement. Wilder even has fun with Super Star’s fortune cookies, which roll out knowledge like “In prosperity, our friends know us. In adversity, we know our friends” right on time.

In its 120-person seat theater, the team at InterAct carries the show beautifully. Larry Fowler’s sound design doesn’t miss a beat, perhaps at its best as Public Enemy’s “Fight The Power” and The Talking Heads’ “Burning Down The House” blast over the audience at intermission. McIlvaine nails the set, telling the visual story of gentrification as he transforms Super Star from a Chinese takeout joint to the first co-op’s first bastardized experiment in its “Community Kitchens” project. In dramaturg Arielle Brown’s Point Breeze, history is so contentious that you go home wanting to find more about it.

In this way Salt Pepper Ketchup is entirely Philly story, and not a Philly story at all. There are regional trademarks—references to the papi store, and the request for “saltpepperketchup” as a single condiment, spoken in one breath. But it’s also a New Haven story, where Dwight is “Chapel West” if you ask a Yalie, and cops will beat Black customers at Whalley’s Beverage Boss for complaints from its immigrant owner, Hasu Patel.

It’s a St. Louis story, where you can only get a Saint Paul Sandwich in certain neighborhoods, and Darren Wilson is let off the hook for killing a child, and real estate in Maplewood looks different than it did five years ago. Or a Detroit story, where Gratiot Avenue is awash in new record stores and coffee shops run by people with beanies and Frye boots.

It’s a story of the long-tern consequences of the Community Reinvestment Act almost 50 years after it was passed—and the vilification of Black and Brown bodies, racist loaning practices, and cyclical displacement that inevitably comes with it.

In a two-month span that has seen the temper tantrum and ensuing SCOTUS appointment of Brett Kavanaugh, the deliberate murders of Black people and Jews across two states, and massive voter suppression efforts in Georgia and Florida, its truthiness is almost too much to handle. And yet it is necessary—especially for the white viewers in the audience, of whom this reporter was one—not to look away.

Because it’s already a requiem for Point Breeze, asking where is this happening in your neighborhood? And it’s an open question. Will you sell out, and roll with the tide of gentrification? Or will you fight the powers that be?