“We Are One Giant Minyan” 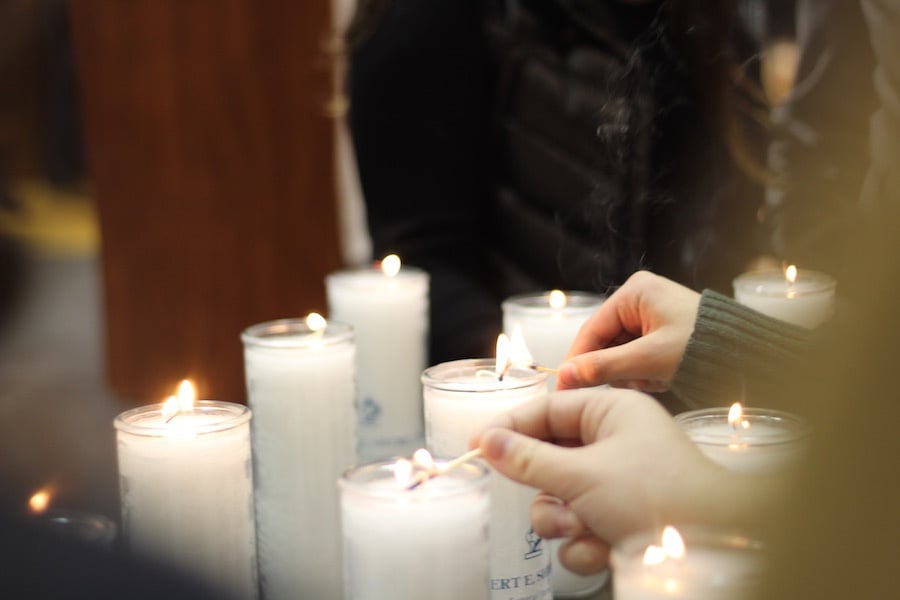 Mourn, but make sure that you are mourning with others. Know no limit to your love, and spread it onto others who look and practice differently. And fight evil—but don’t do it alone. Do it with your minyan.

That message prevailed Sunday night in Woodbridge, as over 500 packed the Jewish Community Center (JCC) of Greater New Haven for a candle lighting, interfaith prayer service and vigil for Saturday’s 11 victims of domestic terrorism at the Tree of Life Sanctuary in Pittsburgh, Penn. The vigil was organized by the Jewish Federation of Greater New Haven, in conjunction with several faith leaders from the greater New Haven area. 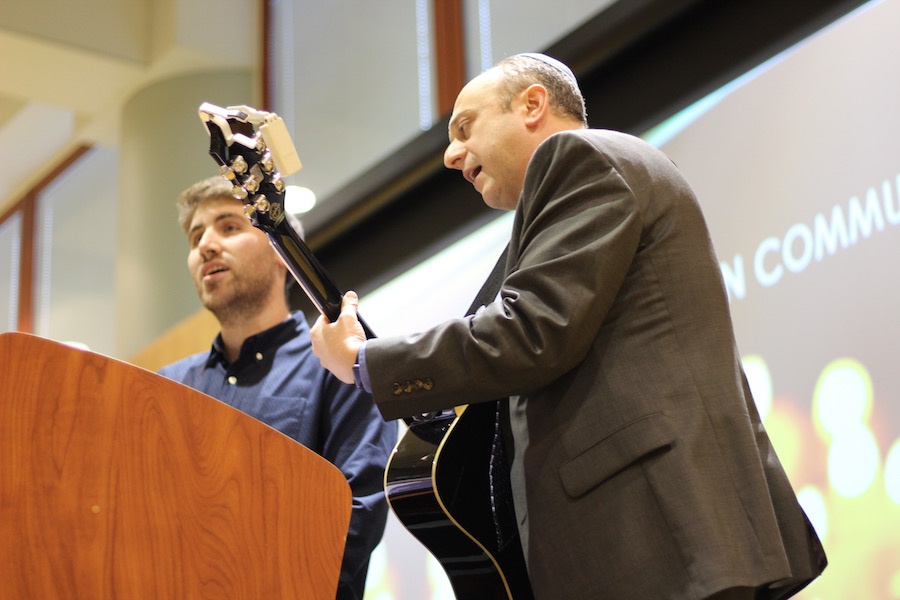 The vigil came just hours after several outlets released the 11 names of the dead, which were beamed onto a screen in white text, accompanied by their ages. Among them were brothers, spouses, and old friends. The oldest, 97-year-old Rose Mallinger, survived the Holocaust only to be killed decades later by a white nationalist in the United States.

In the JCC's auditorium, the vigil began with song, cantor Malachi Kanfer leading the room in a moving Oseh Shalom, hundreds of voices rising with the words Ya'aseh shalom, ya'aseh shalom/Shalom aleinu v'al kol Yisrael (He who makes peace for us in his high places/May he make peace for us). One speaker after another called for not just civility and strength in the face of national tragedy and terror, but a united racial and religious front against bigoted and hate-based violence.

Some were quick to draw a line from Saturday’s shooting—what the Anti-Defamation League (ADL) has already deemed the single deadliest attack on Jews in the history of the United States—to church shootings in Charleston, South Carolina and Sutherland Springs, Tex., hatred towards immigrants and asylum seekers worldwide, the deliberate killings of unarmed Black people, and vilification of the Hebrew Immigrant Aid Society (HIAS).

“We have to understand that if someone is a hater, it makes no difference if they hate this ethnic group or that nationality, or that skin color, or that national identity,” said Rabbi Benjamin Edidin Scolnic, the rabbi at Temple Beth Shalom in Hamden. “If anyone hates any group, they hate us. Because we are part of the human us. If you hate any group, you hate me. Hatred of anyone is hatred of everyone. Today we are united in our fear, in our grief.” 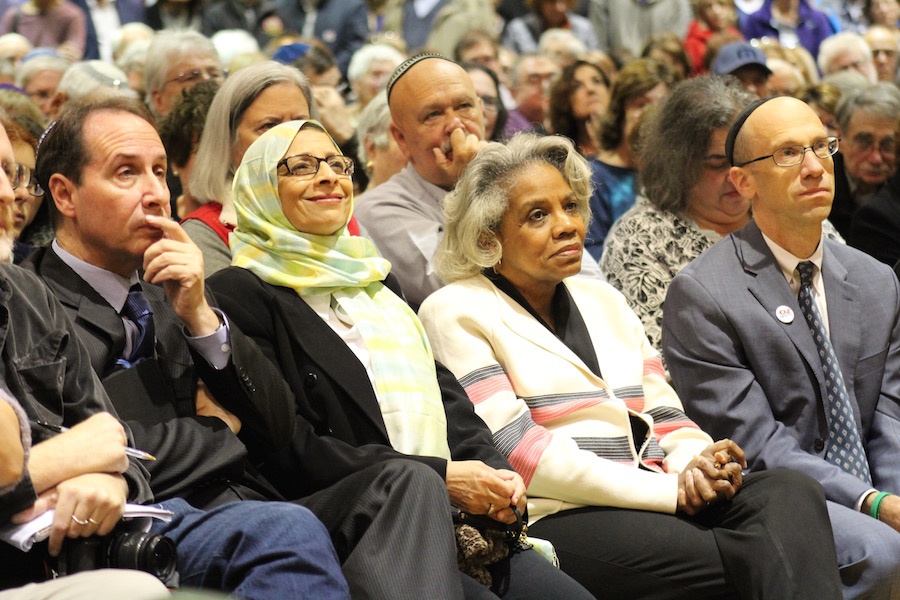 “But after this initial shock has lessened, we can’t just return to our little corners of the community,” he continued. “Let this be a wake-up call to everybody in our community, right here in our area, not just to be more protective, but also to be more of a united community. To stress what we have in common rather than how we’re different.”

“For those in the African-American community, we all know what it’s like to lose lives, especially in our house of worship,” he continued. “Where our churches have been burned down … four little girls lost their lives to a church bombing in Birmingham, Alabama. And then what happened in Charleston three years ago. We are not so much different. We have much more in common than we do have that divides us. But it’s actually through our grief and through our mourning that we can form a bond so strong and so potent that on a night like tonight, we can send one clear message that love will always outweigh hate.” 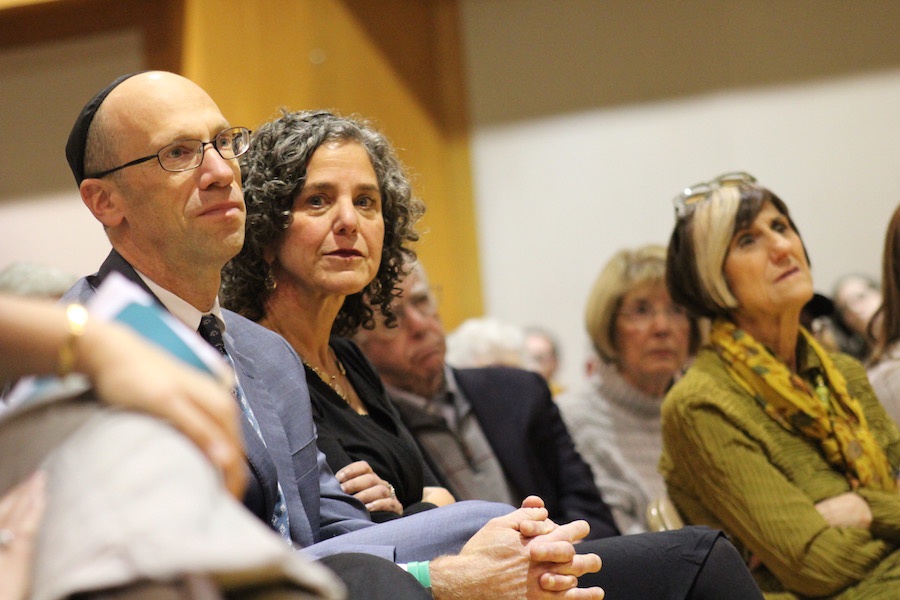 Speaking after him, Rabbi Rona Shapiro (pictured above) of Congregation B’nai Jacob in Woodbridge called Jews “a community scarred by our wounds of the last century,” but recalled the power of hearing from Christian, Muslim, and fellow Jewish faith leaders before she went to bed Saturday night. She pledged her support for immigrant and refugee rights, and implored the room’s 500-plus member crowd to vote on Nov. 6. She urged attendees to mourn for whatever length of time they needed to—and then to turn that grief into action for those who are no longer living to do so.

“As we work to secure our own institutions, let us not forget that there was nothing random or even surprising about this horrific act,” she said. “Things like this will happen when Anti-Semitism goes unchecked in our country. When leaders and candidates for public office in our country give voice to Anti-Semitic sentiments. It is a straight line from Charlottesville to the demonization of George Soros to Pittsburgh. Things like this will happen when we allow hatred to become part of our discourse, when it becomes okay to hate people with whom you disagree or who look different.”

Throughout, faith leaders also called for a kind of social justice minyan—a broad take on the term used for a critical mass of Jews needed for public prayer. At times during the vigil, it went by other names. Rev. Luke Devolder of Trinity Church on the Green urged attendees to form “a coalition of the willing who can prioritize love over hatred." Megan Lloyd Joiner of the Unitarian Society of New Haven suggested “siblings in love.” 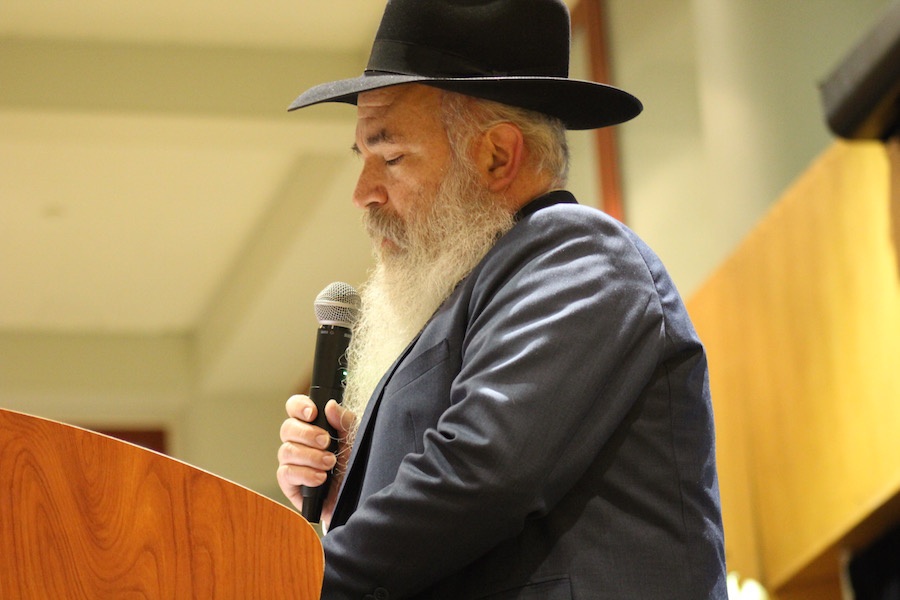 But perhaps more striking was a message from rabbis across Reform, Reconstructionist, Conservative, Orthodox and Ultra-Orthodox denominations of Judaism to come together and unite, despite differences across their faith traditions that have fractured New Haven's Jewish community. As incidences of Anti-Semitism rise—there have been 3,253 documented events since 2016 and many more in cyberspace, according to the Anti-Defamation League’s interactive H.E.A.T. Map—leaders suggested that Jews practicing differently have more in common than they may think.

“I think we have to keep in mind that the killer’s bullets were aimed at every single Jew the world over. And the antidote to senseless hatred is two words: wanton love,” said Rabbi Shea Hecht, head of Southern Connecticut Hebrew Academy. “We have to make sure to embrace every Jew with wanton love and unyielding love … that no matter what differences we may have politically, idealistically, it doesn’t make a difference. Because at the core we’re all one. And that is the only way to fight terror and to fight hate. To show that we have so much more that unites us than that divides us.”

“Just like all our oppressors throughout history, they never ever cared about the differences we attached to each other,” he continued, referencing the words of Israeli journalist Daniel Ben-Simon. “They never saw any of us as better than the other. It never matters to them. They saw us as Jews. Just Jews. That which unites us. We are one people. We are all Jews.” 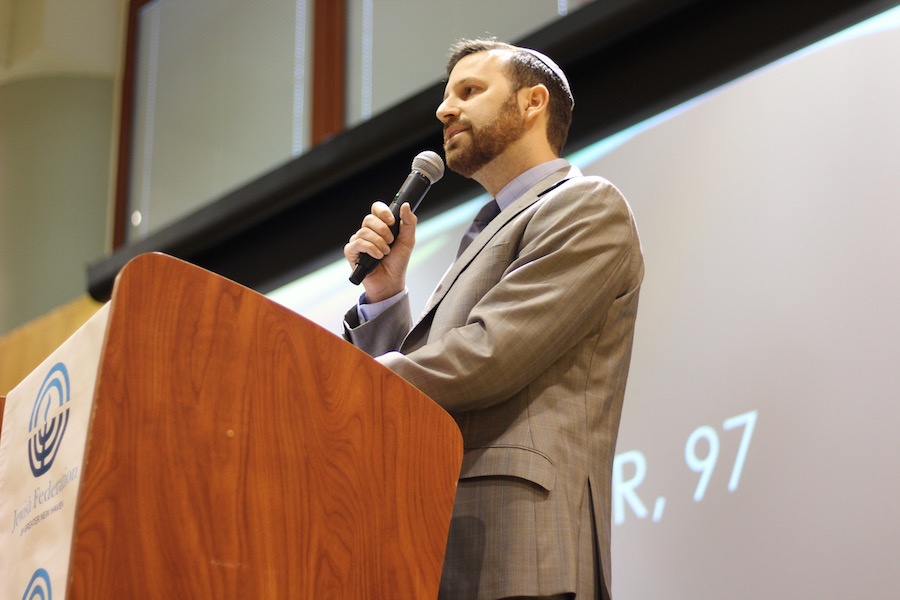 Calling on Jews as “one giant minyan,” Rabbi Brian Immerman of Congregation Mishkan Israel praised the Jewish value of community, suggesting its power in times of mourning.

“We are standing up to violence and Anti-Semitism as a community, demonstrating that no matter where or how we express our judaism, community is always an essential Jewish value,” he said. And, he added, with a large interfaith minyan behind it, “we are stronger than hate.”

For more coverage, watch The Arts Council's Facebook live video from the event and see what our colleagues at the New Haven Independent wrote.