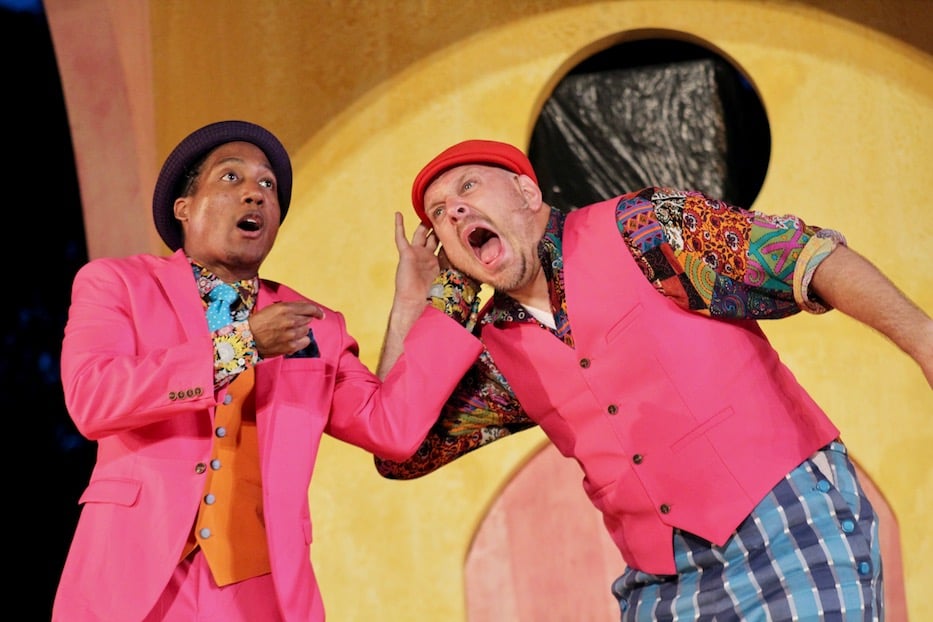 Two servants stand on opposite sides of a door, rapid fire conversing with each other. One wants to get to the other side. The other, ensconced in the house, doesn’t show any sign of budging or coming out. They are almost indistinguishable: same hot pink vest and quilted, patterned shirt, red wool cap and blue checkered pants. Twins, who do not know that their mirror image is just inches away.

That confusion is the backbone of Elm Shakespeare Company’s take on The Comedy Of Errors, running Aug. 15 through Sept. 1 in Edgerton Park. Performances are scheduled Thursday through Sunday each week starting at 8 p.m., with rain cancellations announced by 6 p.m. All performances are completely free and open to the public. More information is available here.

The Comedy Of Errors is funny and dizzying, in the way only a double case of mistaken identity can be. As the play begins, the audience meets Aegeon (Michael Jerome Johnson), who has sailed to the island of Ephesus in search of his son Antipholus (KP Powell) and son’s servant Dromio (Benjamin Curns), both of Syracuse. But he doesn’t receive a welcome reception: he’s a stranger in a strange land, condemned to death by ruling Duke Solinas (Keith Hale) if he cannot pay a high fee for trespassing. 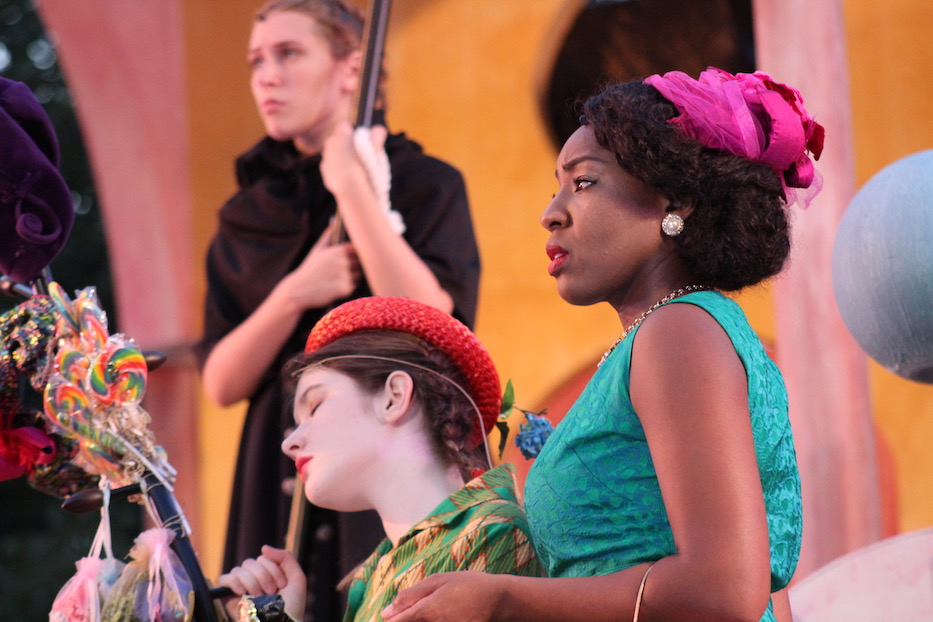 And so, he tells the Ephesians a story: he was once a happily married man with twins, and those twins had servants (read: still a form of slavery) who were also twins, and then the family’s ship hit a rock and sank and they were separated at sea. He rescued one of the twins and one of the servants; Corinthians scooped up his wife and the others, never to be seen again. Now that his remaining son has also disappeared, he has come to the island in hopes of finding him. Shakespeare pulls out his bag of tricks—Shipwrecks! Twins! Forlorn merchants!—and the play rolls into action.

Storytelling is an old device—perhaps the oldest in the book—and it buys Aegeon time. Little does he know, both sets of twins are on the island too, one a successful merchant (Manu Kumasi as Antipholus of Ephesus) and the other in search of his brother. The problem is, they don’t know it either. What ensues is lots of confusion: a wife (Kaia Monroe Rarick) who thinks her husband is cheating on her, a goldsmith (Courtney Stewart) who believes he’s being literally shortchanged, and two servants who are swapped and then swapped again.

It is very much a comedy, often of slapstick and physical proportions with some potty humor for good measure. But for Producing Artistic Director Rebecca Goodheart, the resonances also run deeper. In a conversation after a recent tech rehearsal, she said that she sees connections to immigration, xenophobia, and social anxieties that might be solved more readily if people just got to know each other a little better. A play, in other words, about how funny and also dangerous it is to take things at face value. 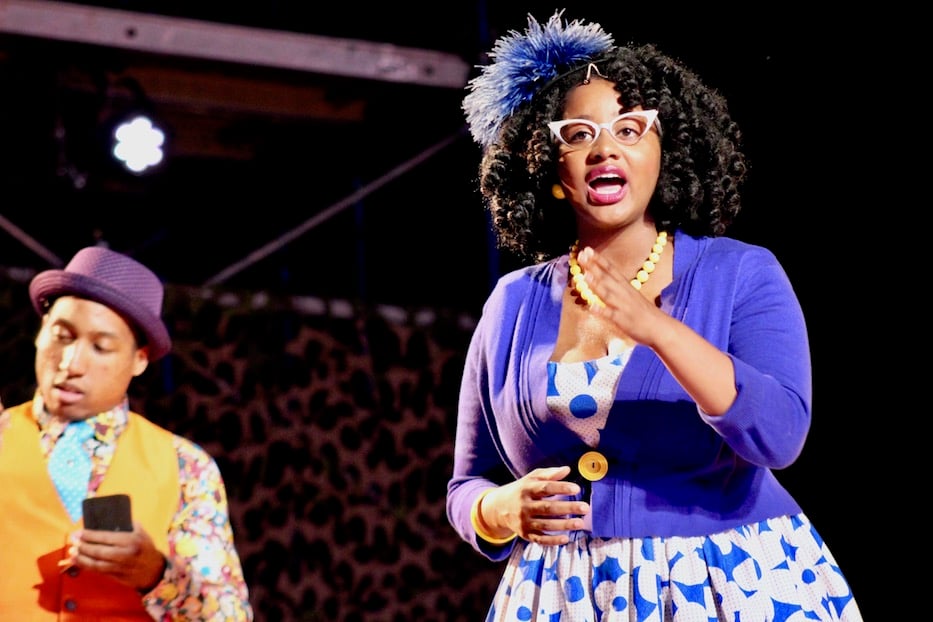 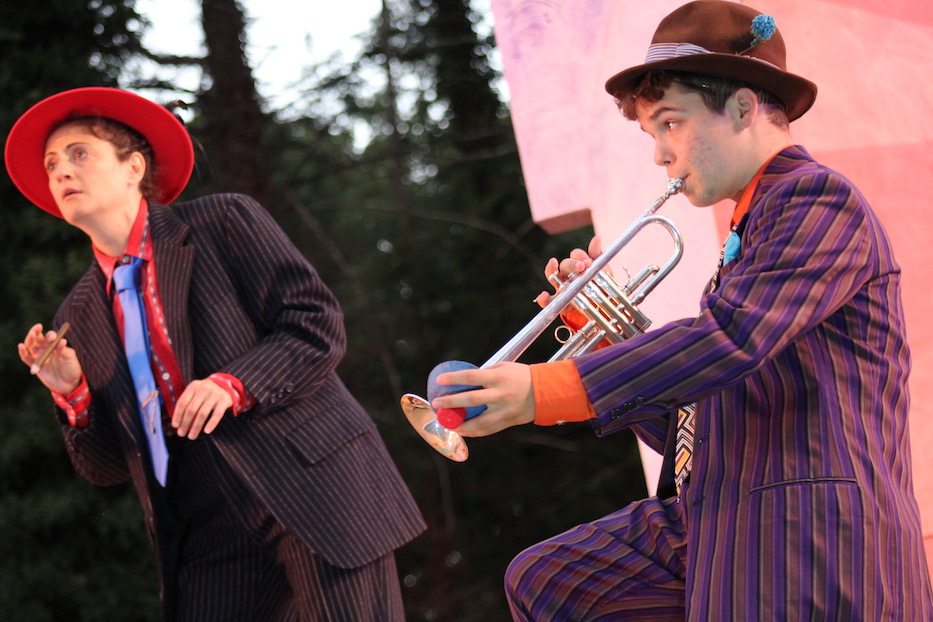 “I think this play is really underrated,” she said. “A lot of times, people just think of this as a wacky, mixed up comedy. But the play starts with an immigrant arriving in a town and being threatened to put to death because he's an immigrant. There’s a family separation … it's caused by a rock and by the Corinthians, but there’s still this resonance there. There's a depth and a joy to the reconciliation at the end of this play.”

“Everyone in this play is afraid of something, and it's really easy to laugh at it,” she added. “But underlying that is: aren't a lot of our fears silly, too? As these characters get to know people, as they learn the story, those fears melt away.”

In Edgerton Park, the script meets a Seussical sensibility that Goodheart has wanted to do for years (this is the fifth production of The Comedy Of Errors in which she has ever been involved). Characters enter the stage in bright, ostentatious costumes that defy any one historical period, just as Seuss did with the Whos of Whoville, Thing One and Thing Two, and the Cat In The Hat. 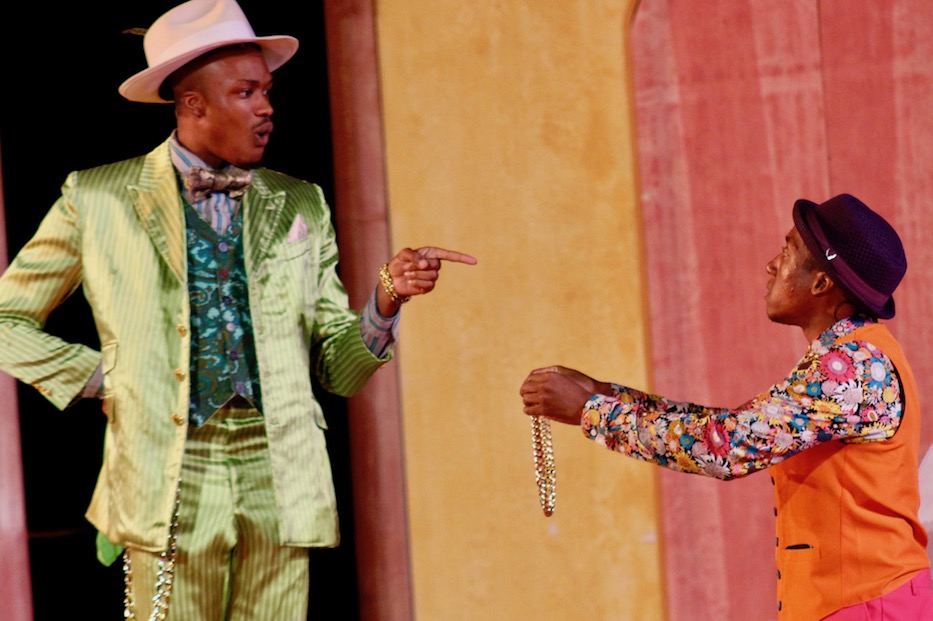 The goldsmith, for instance, is transformed from Elizabethan garb to a shocking green suit, seemingly a nod to both Seuss and the pimp trope from campy B movies from the late 20th century. Prison guards wear costumes half out of If I Ran The Zoo. Others seem lifted from the 1960s and 1970s, which is when many of Seuss’ books were initially released. Even ensemble members are awash in brilliant color, bringing pops of emerald green, rich purples and huge polka dots, and at least one Candy Land-like apron with them.

Bucking adaptations that have featured tuxes and tails, newsboy caps, and hundreds of historical adaptations, the double twin-ness gets a rainbow-colored upgrade with a flair for the fantastic. Antipholus and Antipholus wear hot pink suits with matching fedoras, their button downs emblazoned with tiny, immaculate patterning. Their respective Dromios are hot messes by design, down to quasi-matching stubble.

Around them, set designer Izmir Ickbal has evoked the clean, bright colors and flat angles of not just ancient Greece or the coast of Italy, but also Horton Hears A Who, The Lorax, and Oh The Places You’ll Go among others. Set pieces rotate to reveal rich interiors, including Antipholus’s sumptuous Syracusan home. Particularly smart is a huge, fantastical timepiece that sits near the front of the stage, from which characters check time, lean back, and mutter anxiously to themselves as they go progressively insane. 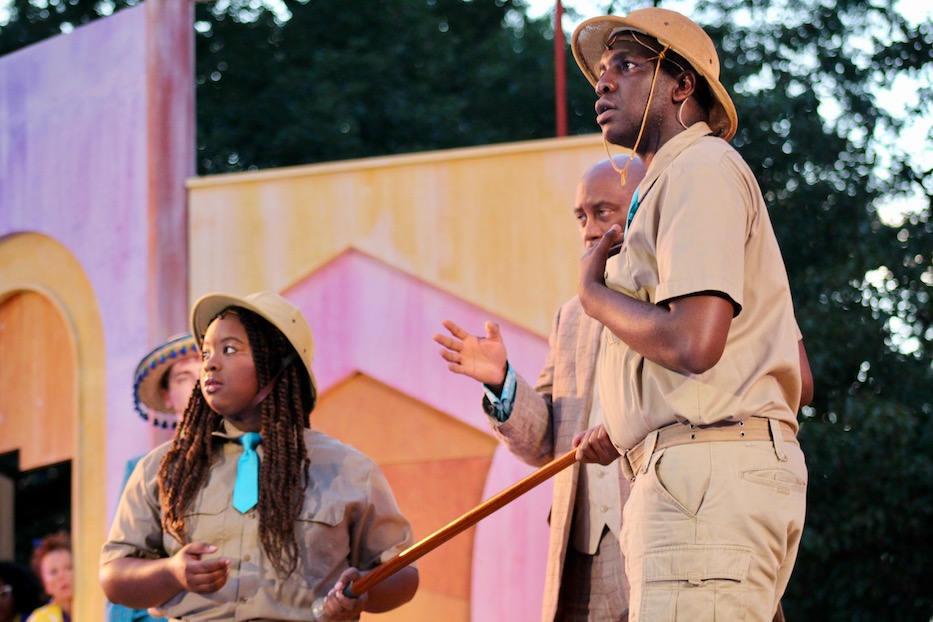 But what makes the play work is the characters within this world, some of whom are so fluent in the Bard that they could be assembling grocery lists or talking politics with friends. From the moment Powell steps onstage, one can physically feel themselves relax into the language. He and Kumasi have a good dynamic, even as they miss running into each other—as if they know there’s something physically afoot, and want to find out what’s causing it.

Curns and Seiler especially have the comedy down: they dodge and dive between each others’ parted legs, they stick their heads out of doors and windows with a rhythm that seems timed to sharp, sudden laughter. They stay in it even when the plot seems to have gone on for much too long. Around them, other characters turn this wacky universe even further on its head. As Luciana, Terra Chaney especially is a welcome surprise, busting from the woodwork with a performance that is understated and emotive, but somehow manages to also be funny.

That’s the magic of farce: a big joke that the audience is in on and the characters aren’t, even as the stakes grow higher around them. Characters miss seeing each other so narrowly, in a timed system of hits and misses, that it's ridiculous and wonderful to suspend one's disbelief for a while. In between acts and before the show, the production is infused with catchy guitar and harmonica that break up the action, building a sort of excitement for whatever the next character entrance will be.

Which, at the end of the night, is enough to get lost laughing in. While the organization did consider a tragedy after last year’s performance of Love’s Labour's Lost, Goodheart said that a comedy felt like the right choice for the year.

“I really think we are in a time right now where a good laugh is something that the world needs as much as the in-depth thinking about things,” she said. “Sitting in a beautiful park with your neighbors and having a good belly laugh can set the world right.”

Elm Shakespeare Company presents William Shakespeare's The Comedy Of Errors Thursdays through Sundays, Aug. 15 through Sept. 1. Performances are completely free and open to the public.