“Songs and Stories” Traces A Pathway To The Heart 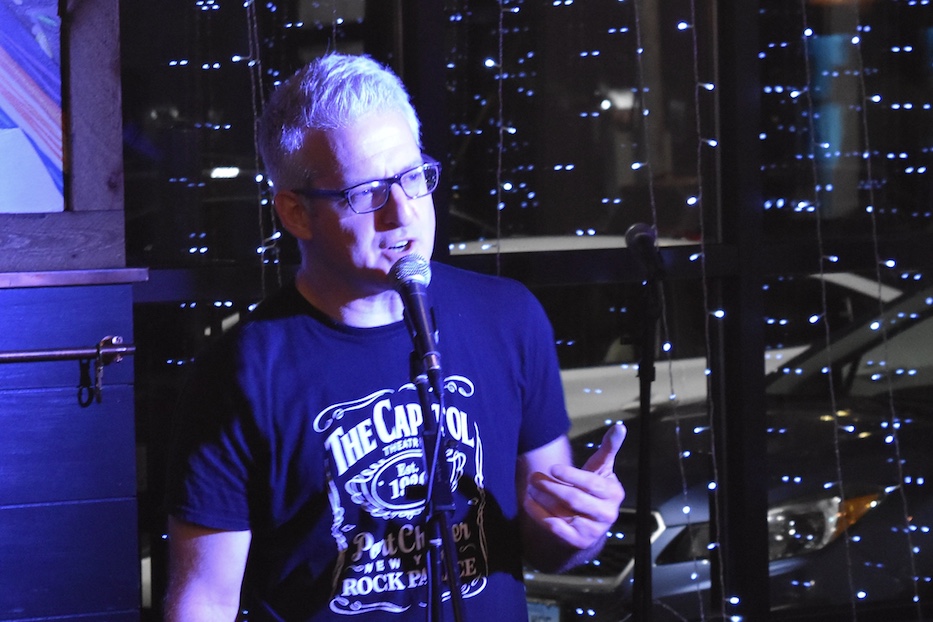 One poet chased horses across an ocean. Another sought the ghost of the Susquehanna. A third walked bravely into “The Blue Death.” All of them came back to what made them who they are.

Those journeys came to life last Saturday night at “Songs and Stories,” a monthly music and storytelling night hosted by writer Saul Fussiner at Next Door New Haven. Over 60 attendees squeezed in standing-room-only to hear six poets and songwriters tell the origin stories of selected poems and songs before performing the pieces described.

The result was an homage to the way that the places and people we come from makes us who we are today, and an exploration of the odyssey that often connects those two points.

David Brooks began with a guitar riff that wouldn’t leave him alone. As he told it, the name of his hometown popped into his head and became a three note melody. Before he knew it, he was writing about Harrisburg, Pennsylvania—the town to which he swore he’d never return. The song became “Ghost of the Susquehanna,” an ode to the river that flows through the city. 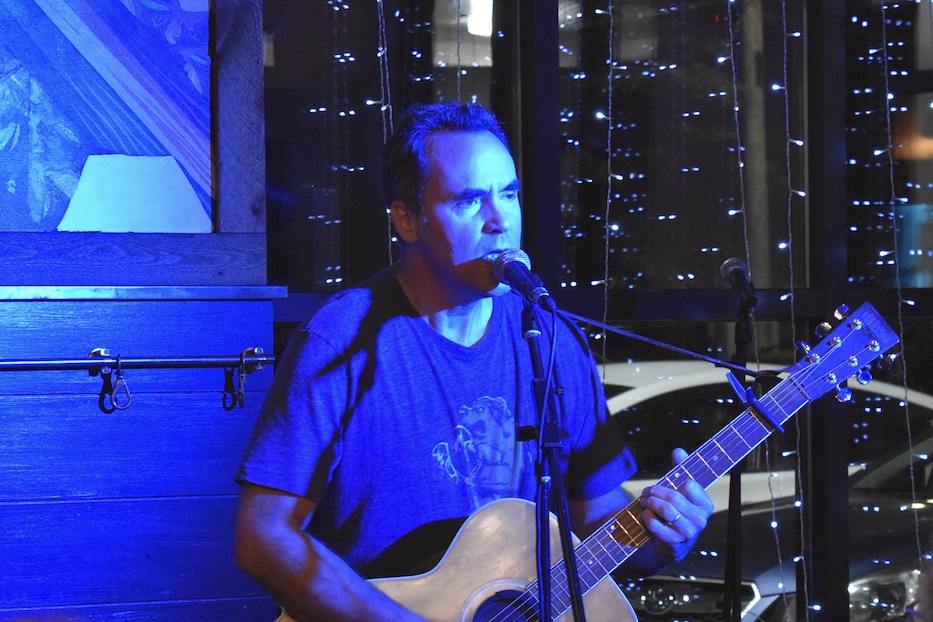 The water rolls down from the end of the bridge to the power station towers…
Don’t you wish you’d drunk some of that water?…
The ghost of the river rides on and on

At key points in the song, he sang the name of his town quietly, his voice strained with a mix of sadness, pain, and nostalgia. The song ended on a chord filled with tension; it had no real resolution. Memories often don’t.

And then again, sometimes they do. At least, that was the case for writer and arts reporter Karen Ponzio.

The biggest “don’t” of all was “don’t go near the water.” Ponzio recalled her mother saying again and again, “Something might happen.” And yet she did, venturing onto the beach as a teenager.

As mother and daughter lived out their lives bounded by fears, “what happened is what always happens,” Ponzio said. “Something happened.” In this case, her father passed away.

And yet, his passing gave her the courage to step beyond her fears—onto the stage as a poet and storyteller. 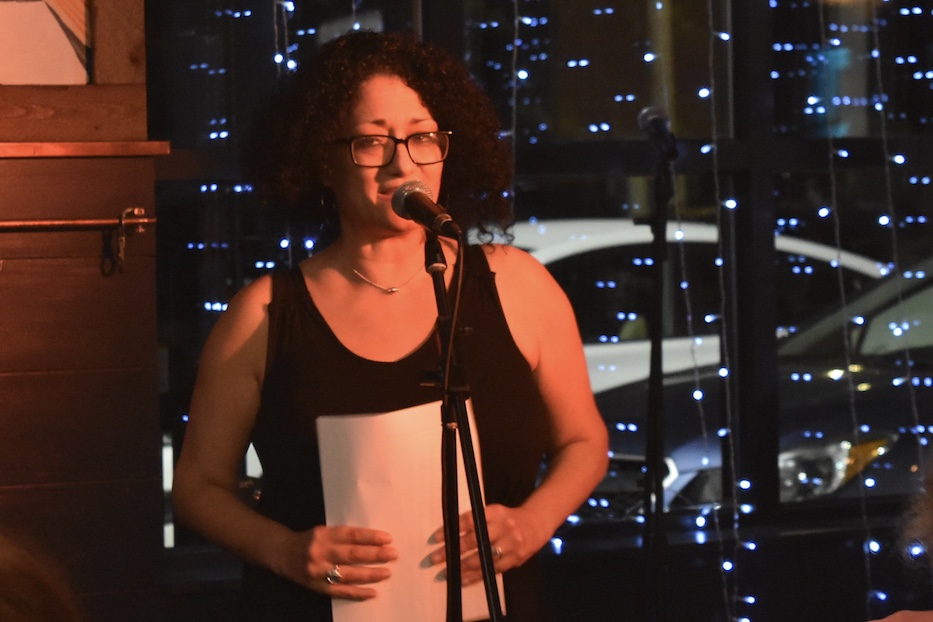 She captured that emotional process in her poem “The Blue Death.” In it, she connects the way a blue frozen drink—a beachside treat—stains your mouth blue to the blue lips of a boy who drowns at the beach. She explained that the woman in the poem is not specifically her mother; the poem is a work of creative nonfiction influenced by her mother's fears.

Later when her mother was dying, Ponzio recalls asking her, “You were afraid of a lot of things, mom. It didn’t change anything, did it?”

Ponzio said her mother let go of some of those fears when she gave her daughter one last “don’t”, saying, “Don’t cry. It’ll be okay.”

Musician Lys Guillorn said she identified with that kind of “fear-based upbringing.” She recalled that her family’s attitude was, “You can’t go away to college. Something might happen.” She went to a nearby Catholic university and where she struggled to fit in as a queer kid.

“There was no word for genderqueer then,” she said, “So I was just weird.”

She performed “Nothing to It,” a song she wrote about those first difficult years at school:

The easy rollick of the melody belied the depth that song holds for Guillorn.

“I co-wrote this song with my subconscious,” she said.

Earlier in the night, before poet Franz Douskey took the stage, Fussiner told the audience how much he admires the adventure and travel that have characterized Douskey’s life. But Douskey was self-deprecating in the face of such praise.

“I didn’t think I was accomplishing anything. I am now what I was then—a bum,” he said of his journeys.

Douskey told the audience about a period in his life when he traveled around the country to find and meet the writers and musicians that inspired him. Then he read from his poem “Kitchen Lights,” which recalled the time he spent with Kenneth Pachen, a beat poet who was one of the first to layer spoken word over jazz. 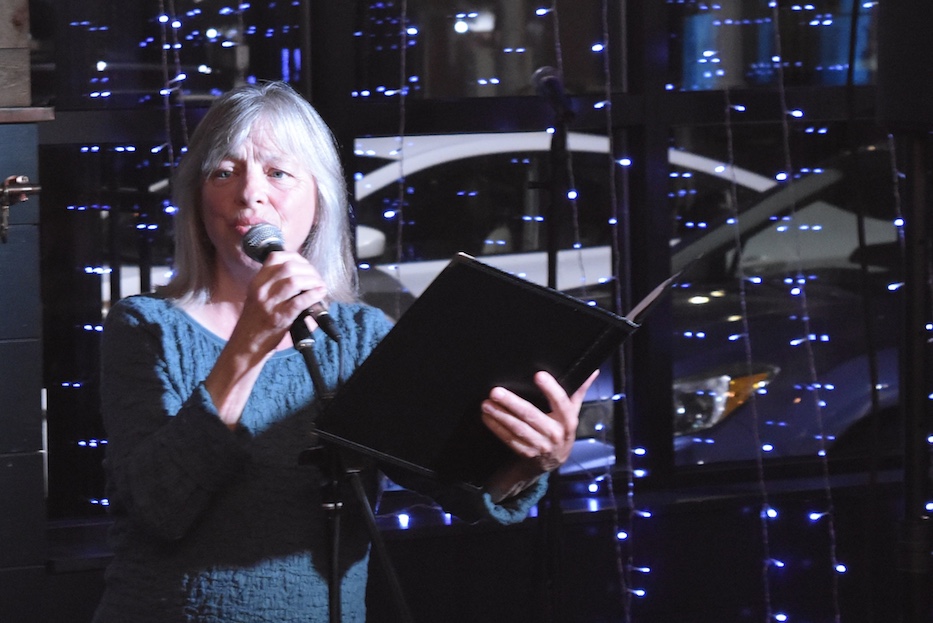 Later in the night Sarah Heath, Douskey’s partner of several decades, performed her interpretations of two of Douskey’s poems over jazz music she composed and recorded specifically for the purpose. The images wandered from gargoyles to lite beer to giving humanity one last try as Heath snapped and recited, interspersing the lines with snippets of soulful melody.

Heath truly captured the spirit of the night when, with a gesture to her fellow performers, she took the stage and said, “We are really nothing but memories and dreams to come.”

Nowhere was that more fully on display than with poet and playwright Aaron Jafferis’ performance of a work in progress. He began with part of a poem:

Today I wake to one sound I wish at once I could un-hear, un-sound:
My dad’s quaking voice telling me that my mom’s seemingly sound heart stopped out of nowhere
I walk out of the nowhere this puts me in and into the emergency room
Still thinking there might be some way of waking her, though she’s been dead for two hours

There is no sound in the room except ones I make
My mom is an un-sound,
Sucking the breath, the water, the universe out of me
A reverse big bang, where everything that ever existed undoes itself
Un-sounds itself
Into the space of her still body

Every heart in the room seemed to beat alongside Jafferis’. He chose each word of the narrative as carefully as he did the words in his poem. Not just the words, but also his timing and his pauses, and the bits of humor that made the heart-wrenching moments that much more poignant.

Jafferis’ mother’s final wishes were to have her ashes scattered or buried in “a vessel made by Native North Americans” (emphasis hers). Jafferis, though wincing at the cultural appropriation, still contacted one of his mother’s friends, who said she would ask someone she knew, a basketmaker from the Mi’kmaq and Maliseet nations. In the meantime, Jafferis, in order to find an appropriate symbol to adorn the basket, was to “go to a place special to me and my mom and ask Creation a question.”

In an old horse field he and his mom used to visit together, he closed his eyes and felt his mother’s hand in his. The fence was broken down and the horses long gone, but Jafferis came alive.

“Running, galloping, cantering on my tip toes, on my hooves, I feel her running beside me, faster than she has in her whole life, free of any box, or vessel, or any story I could put her in,” he said.

Later his mother’s friend pulled out a tea towel depicting the chalk horses constructed on hillsides by the native English people thousands of years ago. Only one of those captured the feeling Jafferis had in that field, a design “more wild” yet “more simple” than the others: the Uffington Horse. He chose that one for his mother’s basket.

Visiting his mother’s family some time later, Jafferis found himself by coincidence visiting that same horse and leaving some of his mother’s ashes there.

“The instructions my mom gave me sent me on this journey, the first of many journeys she’s been with me on since she died,” he said. His relationship with his mother was not over, was not dead or unmoving. It had only changed, and it was up to him what that relationship would look like in the future.

The “question for Creation” was not what should go on the vessel that would hold his mother’s ashes, Jafferis said, slipping seamlessly from story back into poetry, “but what should go in this vessel”—and here he placed his hand on his chest—“with which I will carry my mom forever.”

I was once inside her, soundless
And now she is only in me…
I sound my depths for signs of her…
I can’t hear the unsound of her separate from me,
But I know she’s there

Everyone seemed to wrap themselves completely in the folds of the story—and to emerge from it changed at the end.

That’s just what Fussiner hopes will happen to the audience members each time they come to Songs and Stories.

“I hope each person will have one moment where they say, ‘I really felt that…I got lost inside it,’” he said. “I want them to leave and feel like, ‘That touched my heart.’”

Next Door New Haven is located at 175 Humphrey Street. To find out more about a rotating calendar of cultural events there, check out their website.