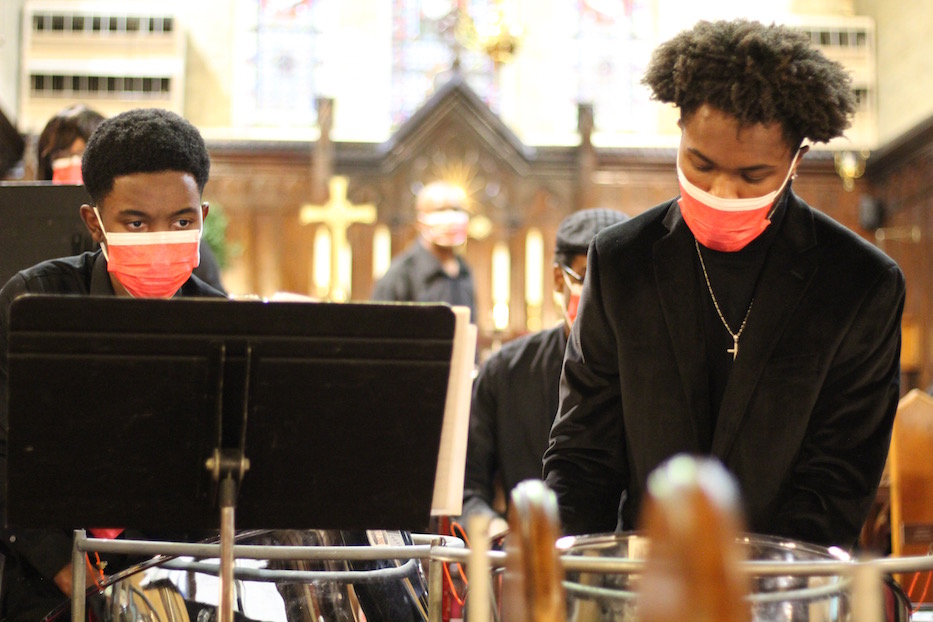 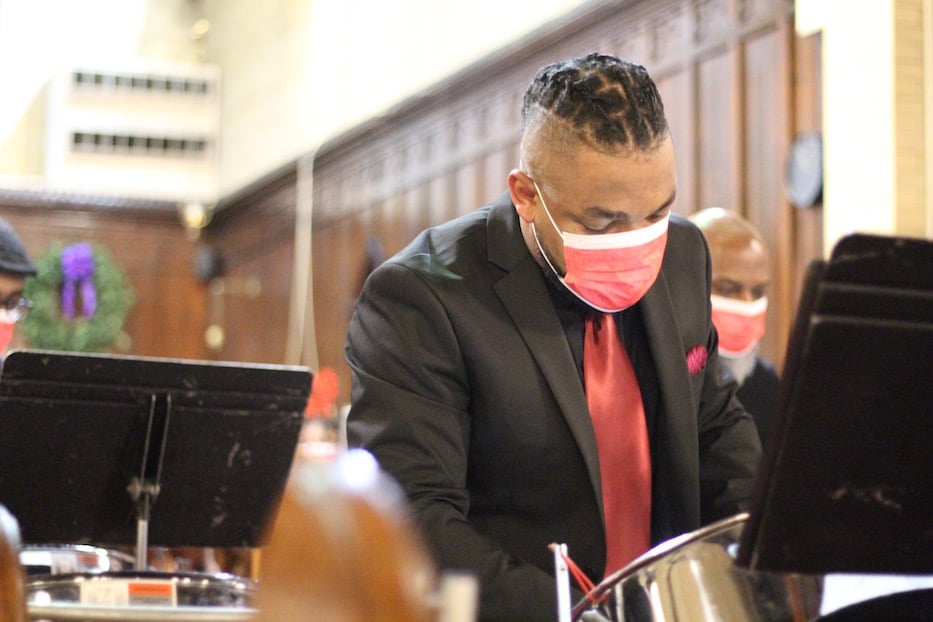 Kenneth Joseph, who has ben playing steelpan for over 25 years and conducting the St. Luke's Steel Band. Lucy Gellman Photos.

Kenneth Joseph’s right hand cut the air, a mallet held gingerly between his fingers as the church fell to a hush. He coaxed a whisper from the tenor steel pan, listening for the stillness that came between each note. Three or four voices joined in, so low and round they sounded more like pipe organ than steel. Percussion dropped, and a wave of sound crested over the audience.

St. Luke’s Steel Band made a triumphant, huge-hearted return to performance Saturday afternoon, as musicians took the stage at St. Luke’s Episcopal Church for their first in-person concert since December 2019. In just 90 minutes, the show—set inside a quiet Whalley Avenue church, under a slate-grey, spitting December sky—became one of the most stirring, surprising and intergenerational moments of the year. A few dozen attended in person; several more watched through a livestream.

“We are smiling behind our masks,” Joseph said to laughs as he welcomed 40 audience members to the space. “I know you can’t really tell, but we are.” 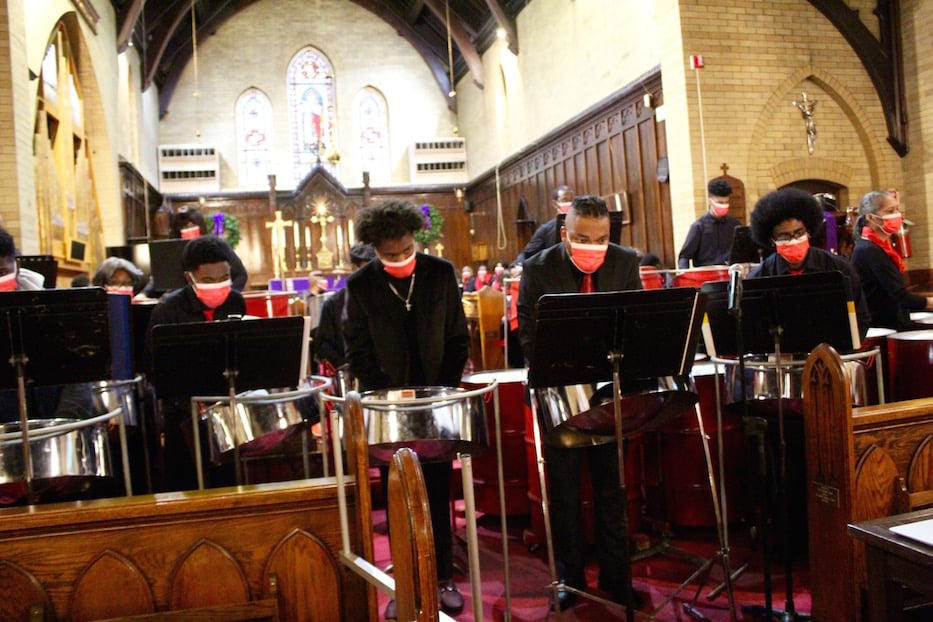 The concert band in action.

If the specter of the pandemic lurked everywhere—temperature checks at the door, Rudolph-red masks on band members, pews roped off neatly for social distancing—Joseph never once let it stifle the band’s holiday spirit. On the music stands lining the transepts, Christmas carols waited alongside gospel, soca, and calypso. A dormant incense burner hung from the rafters, making the fleet of drums feel holy as they caught in the light.

From the first strains of “It’s The Most Wonderful Time of the Year,” the band was all in. Mallets did not fly through the air so much as undulate, bouncing on the bright, oiled drums as the sound jingled and rolled through the nave. The double tenors entered from the back with a low chime, a twang at the edges of each note. In the front row, Mark Taylor leaned into his tenor steel pan and listened for the right vibration. In the audience, a few young children started dancing in their parents’ laps.

By “Mary Did You Hear?” steel pan was ringing attendees into being. Before the band began, musicians stilled in front of their drums, summoning a quiet that spread into the church. Joseph lowered himself to the drum’s scalloped surface, listening for exactly what it had to say. He slipped a mallet from between his fingers to his palm, letting out a slow, steady opening to the song. In his hands, it sounded like the notes were climbing toward something, each filled with the same awe that flows through the story of Jesus’ birth. 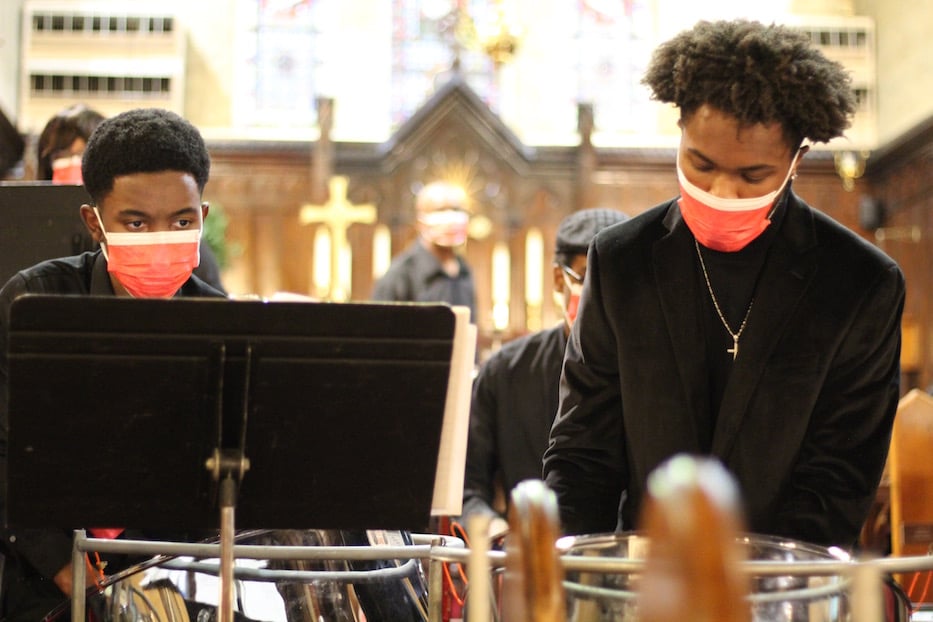 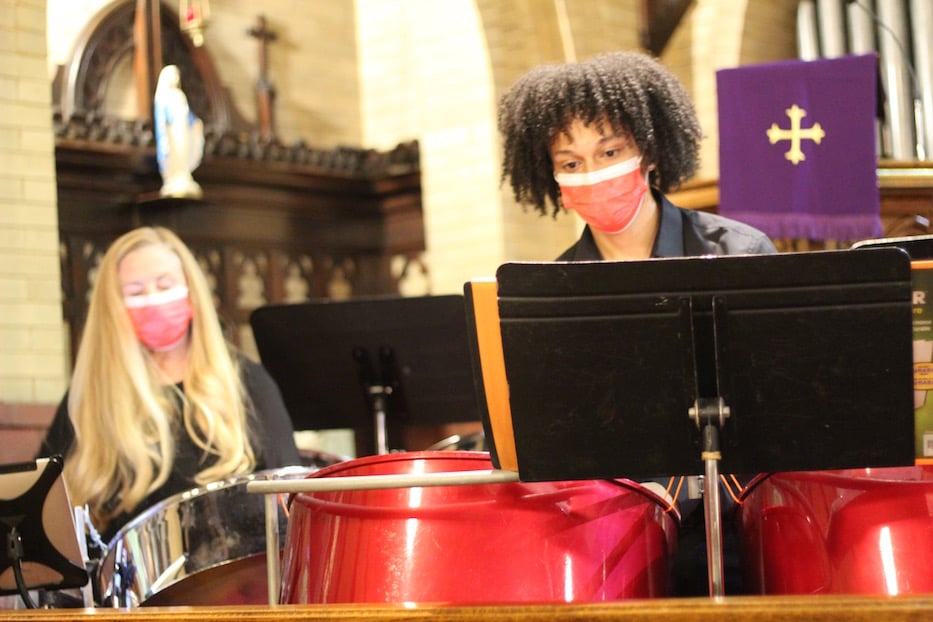 Slowly, steel pan joined in section by section behind him, until there was the sense of a choir singing softly beneath the drums. First the tenors in the front, with a harmony that split away from Joseph and hummed. Then double second and double guitar, and bass that hit right at the ribcage. In every turned shoulder and flicked wrist was a sense of growing urgency, as if a voice was speaking through the church from another universe entirely.

Every so often, Joseph held the quietude and then released it, extending one arm sharply behind him as he looked back over his shoulder. The notes hung in the air, their magic broken by a round of raucous, cheering applause. Not even a minute later, the band had dipped into “Christmastime Is Here,” and Charlie Brown was making his way through the church.

Like the steel pan itself, the band has a depth and round, soulful kind of endurance that spans genres and generations. In a moving “O Holy Night,” the tenor pans turned into temporary harpsichords, enough to bring listeners to their knees once cymbals crashed in. In the PANstars’ “Carol of the Bells,” a listener could have sworn that someone was playing the organ behind the group. When the PANatics replaced the concert band on stage, they got into a groove with “Do You Hear What I Hear” before marrying steel pan and big band percussion in a heart-thumping “In The Air Tonight.” 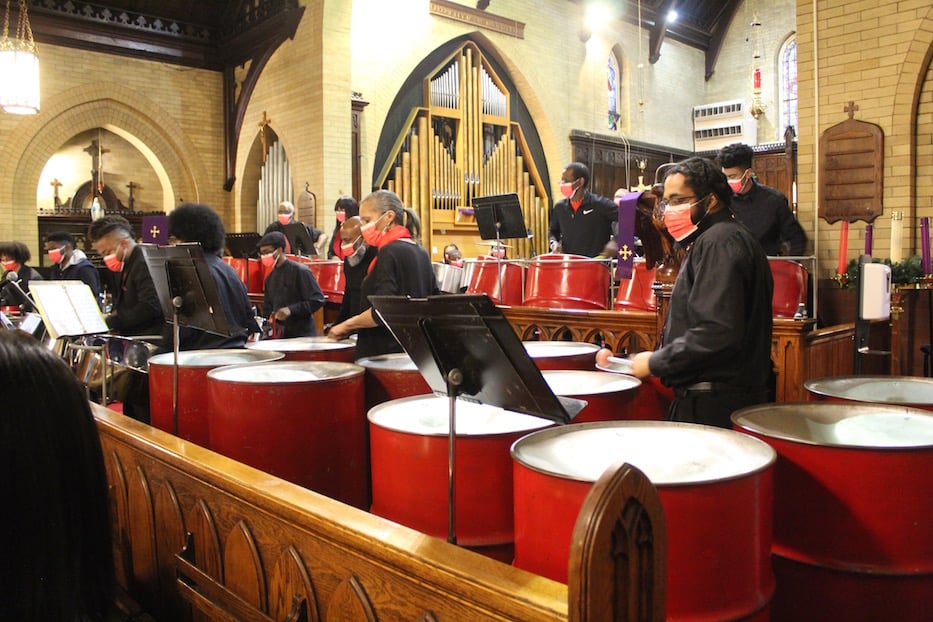 The band is careful not to leave anyone out, Joseph said between numbers—it’s one of the reasons that students of all ages stay with the group for decades. The PANstars, which includes students in elementary, middle and high school, hypnotized as they began with a slow, methodical “Carol of the Bells” and then suddenly started to shred in G minor, the sound full and overlapping in the belly of the old church.

Joseph, who took over the band in 2010 (it was founded in 1999 by musician and composer Debby Teason, who was in the audience Saturday), is part of that magic. When he rose, it was to deliver a command with few or no words at all—the flutter of a hand, the uncurling of his fingers as he ushered in a piece, the uneven, taut slope of his shoulders as he played. At a few points Saturday, it felt like he alone could commandeer the whisper-thin veil between sacred and profane, and wanted to test the boundary between each.

Every so often, he remembered the audience, and turned to tell them what they were about to listen to. To claps and a few cheers from the front rows, he announced that the group was going to switch to calypso, a style that carries the weight of a diaspora and the sounds of Joseph’s native Trinidad. But there was a catch.

“Since you want the calypso you have to actually move to it,” he said to a few laughs. “I’m serious! If I don’t see you dancing, I’m going to stop.” 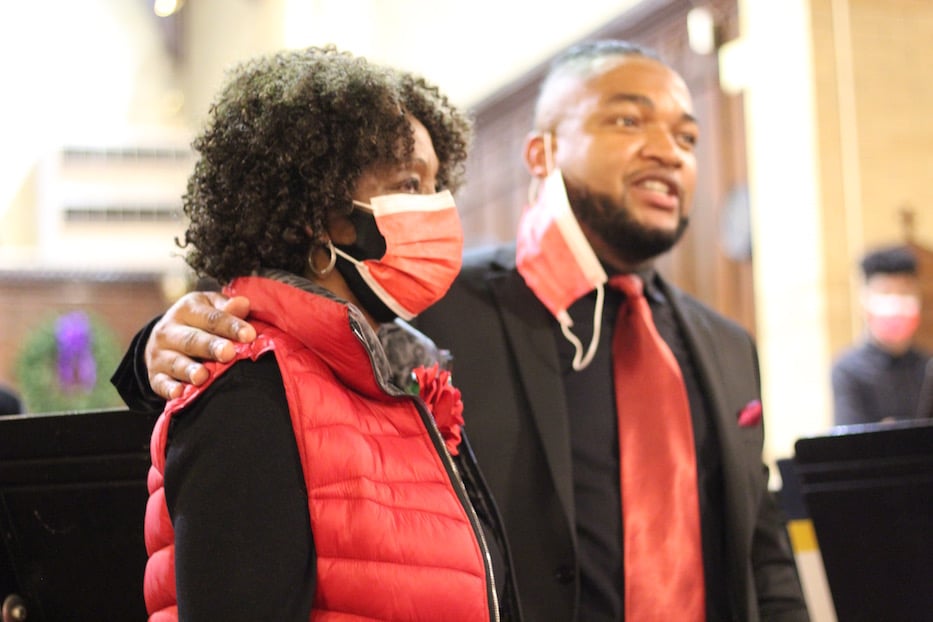 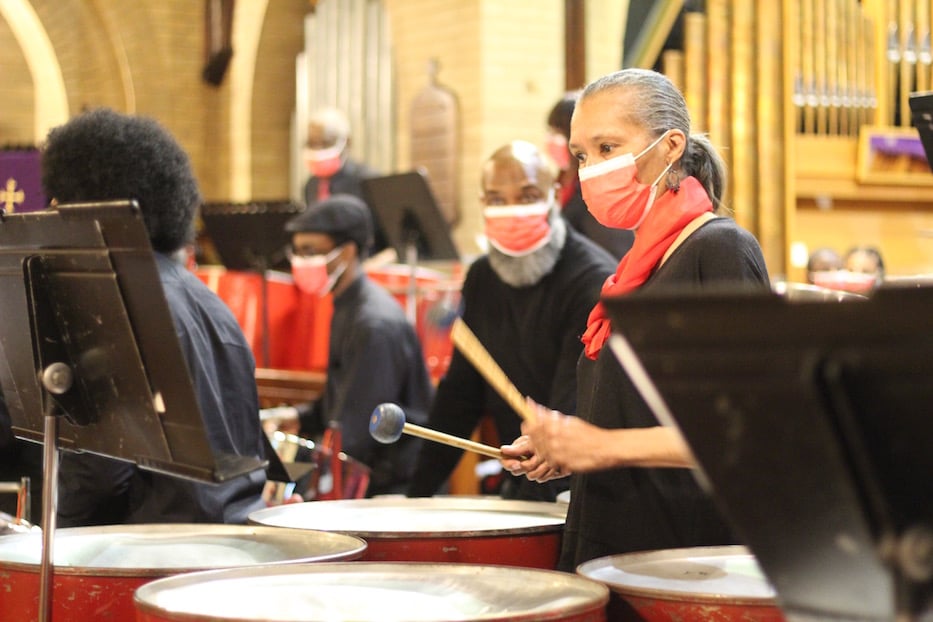 No sooner had he turned back to the group than calypso and soca filled the room, so propulsive that bass players broke a sweat. In the rows, attendees stood from their pews, stepping out into the aisles to dance beneath the stained glass windows and cool brick. One mother held a baby on her lap, holding her arms as they pumped up and down. In the right transept, Lisa Yarbor and Adam Smith rocked from one foot to the other, commandeering two drums at any one time.

By the time Joseph announced a cover of Da Spirits’ “Black Cake and Sorrel,” seemingly apologetic that there was no black cake to accompany the piece, former members, churchgoers, and pint-sized listeners were swinging. Masks lit up the room with bedazzled patterns and flags from Trinidad and Saint Kitts. A percussion solo in the middle of the song got the audience clapping in time.

Joseph turned toward the band, himself dancing to the music. He seemed to have forgotten his momentary apology— “I’m sorry, you’re not getting anything to eat right now… please don’t leave!”—and let the music transport him. When he yelled “One! Two! And one, two, three!” he turned around and the band joined back in.

The notes, each bouncing, held the history of the last 20 months: the stop-and-start of safely playing in a pandemic, a way to bring together youth and elders, a celebration of longtime steel pan player Jan Simmons, who died earlier this year. It was a ringing welcome to a season of miracles when the world may desperately need them.

Surrounded by a masked swarm of students, parents and longtime fans after the concert, Joseph said it was good to be back. When the pandemic began in early 2020, members of the concert band had just finished playing an annual Martin Luther King, Jr. Day concert with Music Haven downtown. As venues shuttered, members went on hiatus for several months, then reconvened briefly in the summer of 2020 to record parts for Pan In Unity. The international, virtual steel pan initiative ultimately brought in close to 700 musicians across 23 countries.

Joseph, who is the elementary dean of student culture at Booker T. Washington Academy, remembered watching the different stages of the pandemic unfold and realizing that it was too risky to hold a 2020 Christmas concert. After a summer pilot this year, he brought the band back this fall. He said that members have been rehearsing for roughly eight weeks.

His decision not to widely advertise the concert came from the fact that it was largely for friends, families, and former members who wanted to celebrate the group in the same space.

“I love it,” he said. “It was very emotional being here. Bringing people together, having fun, fellowshipping—that’s so important right now.”

To listen to more from the concert, click on the videos above.