On MLK Day, A Place Where Music Does The Talking 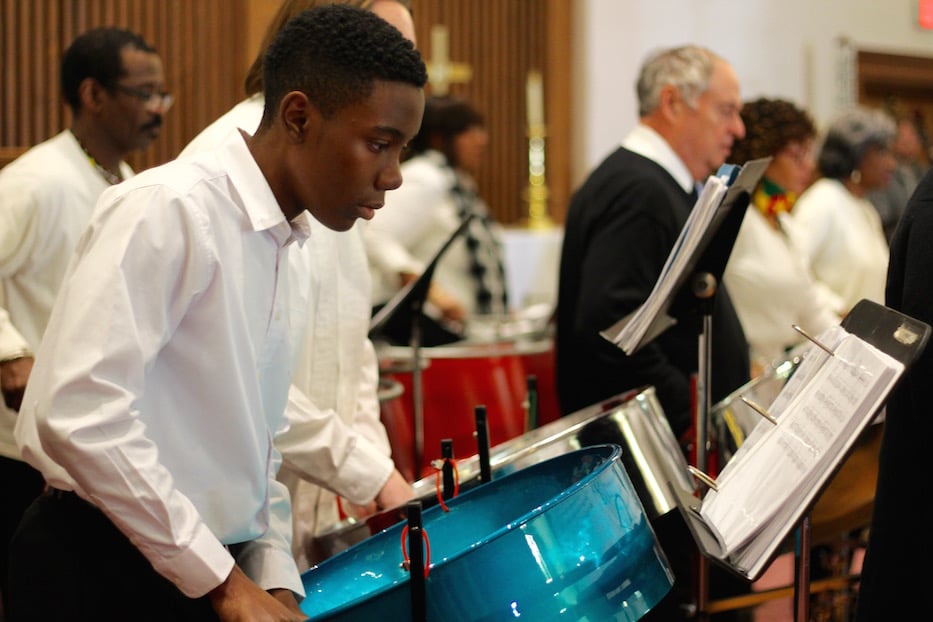 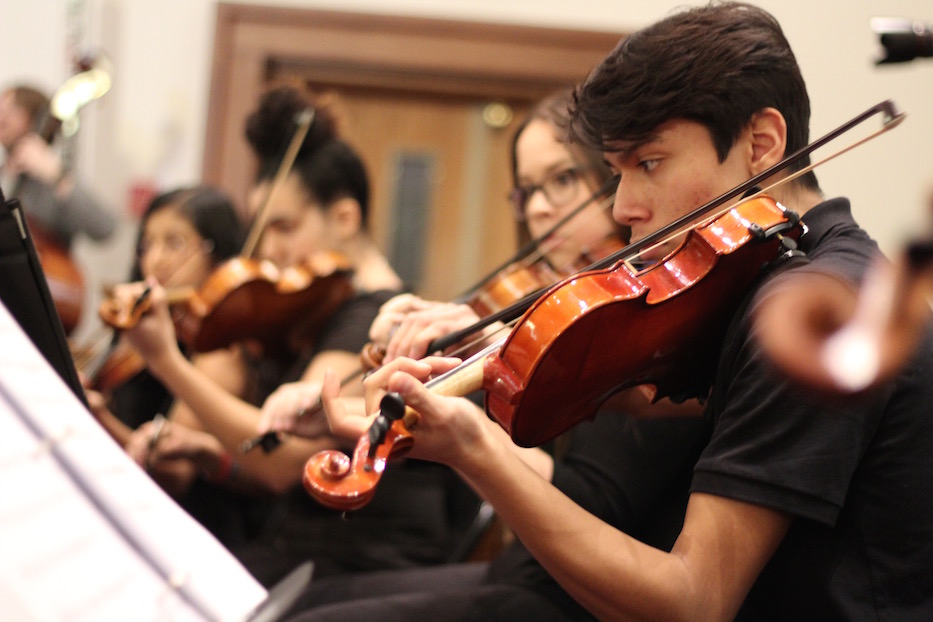 By the second half of “Lovely Day,” hearts were pumping and twisting across the sanctuary. By “Siyahamba,” attendees were dancing in their seats. And when conductor Kenneth Joseph raised his hands for “Lift Every Voice and Sing,” the sun shifted outside, and sheaves of gold light streamed into the church.

A cry for collective action and resistance descended on Elm Street Monday afternoon, as Music Haven and St. Luke’s Steel Band performed their 10th annual concert in honor of Martin Luther King, Jr. For the third year in a row, the concert was held at First & Summerfield United Methodist Church downtown. Hundreds came out for the performance, titled “No Hate/No Fear: A Celebration Of Togetherhood.”

For the first time in a decade, both groups ditched quotations from King’s written and elocutionary history for an hour of uninterrupted music. Musicians were accompanied by New Haven singer-songwriter Thabisa Rich (who performs simply as Thabisa), who has led workshops with the students in the past months. And in turn, the pieces spoke completely for themselves.

“We really wanted to focus on the music,” said Mandi Jackson, executive director of Music Haven. “We’re celebrating 10 years of collaboration of these organizations, but also the spirit of the day.”

The change feels right on time. In 2010, the concert started as an experiment between violist Colin Benn, who was then a musician in residence at Music Haven, and steel pan teacher and composer Deborah Fischer Teason. Joseph, who conducts the steel band, had just arrived in New Haven “and was sort of thrown into it.” In 10 years, both organizations have grown in number, pushing them to look for larger spaces.

After making a home at St. Luke’s Episcopal Church on Whalley Avenue—right next to Music Haven’s original home—the concert moved in 2016 to Christ Church on Broadway, and then in 2018 to First & Summerfield on Elm Street. There have been keynote addresses, readings from students, and awards ceremonies along the way.

As an arrangement of Bill Withers’ “Lovely Day” soared over the audience, that new spirit wove itself through the space, slipping under seats and cozying up to new attendees. Sun streamed through the windows, filling the church with light. While the same verve of Withers’ 1977 recording was there, this rendition bounced and rolled forward, steel pan undulating like laughter.

Across the packed church, attendees seemed to sit up a little straighter in their seats. A few scrunched their eyes, as if they were formulating the words in their heads. Others nodded to the lyrics, smiles flickering as they shook off any residual cold.

Suddenly, it seemed, the musicians had a new nimbleness, students diving deep on the songs and coming out with new meaning. When the concert flowed from “Lovely Day” into The Impressions’ “People Get Ready”—recorded three years before King was assassinated in Memphis—the song promised its listeners that there was a better universe on the horizon, Curtis Mayfield almost audible between the sing-song of the drums.

Pieces also packed a punch, a reminder not just of King’s vision, but also of the institutional racism that has worked so hard to stifle it at every turn. As musicians transitioned into Sam Cooke’s “A Change Is Gonna Come,” the mood shifted. A heaviness settled over the sanctuary, instruments lifting through it. Thabisa took on Cooke’s words as a mellifluous rallying cry.

I was born by the river/ in a little old tent, oh and
Just like this river, I've been running ever since
It's been a long, a long time coming
But I know, a change is gotta come, oh yes it will

The strings became a dependable march. Thabisa wailed, and it was enough to bring a grown person to their knees. She bellowed, strings slipping beneath her, and nearly every eye in the room followed her as she swayed. From the other side of a makeshift stage, steel rang out like a backup choir. 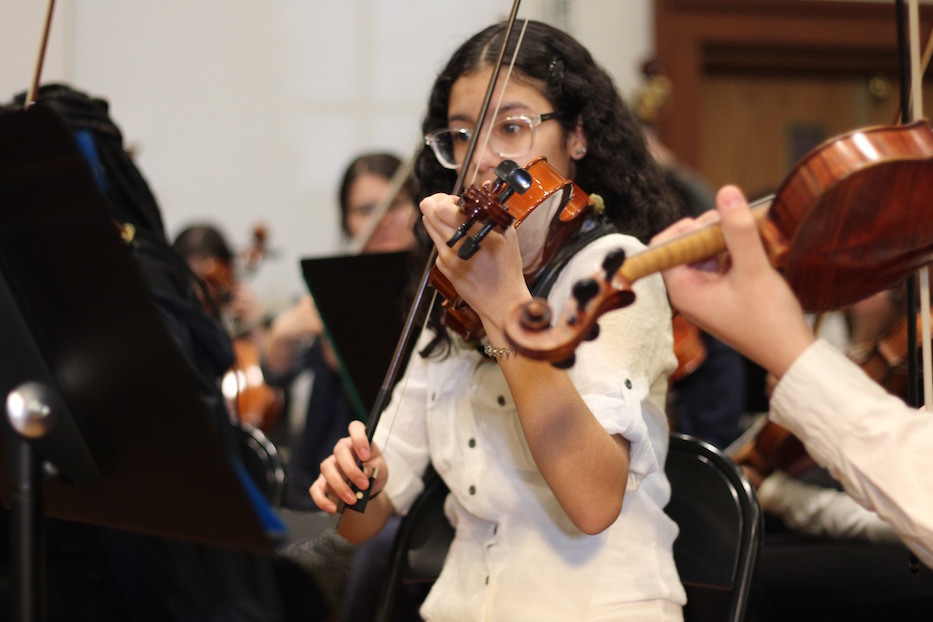 By the time she crooned “it's been too hard living/But I'm afraid to die/Cause I don't know what's up there/Beyond the sky,” it was hard not to think of the bodies that could have been listening if a change had come sooner: not just King, who would have been 91 years old this year, but also Malik Jones, Jayson Negron, Anthony “Chulo” Vega, and most recently Mubarak Soulemane, a Gateway Community College student who was killed by a state trooper last Wednesday.

It wasn’t, the musicians seemed to say, that a change was gonna come because it would be nice. Instead, a change was going to come because it had to. That there was—and is—no other alternative in New Haven, in Connecticut, or in the country. As they performed in the church—a longtime sanctuary congregation—the state-sanctioned evil of militarism of which King warned raged on outside.

The work King did on the Poor People’s Campaign still needed to get done. Economic depravity and exploitation still wormed their way into city planning meetings and claims of eminent domain around the city. Cooke hadn’t needed to say any of those things because he sang it instead. 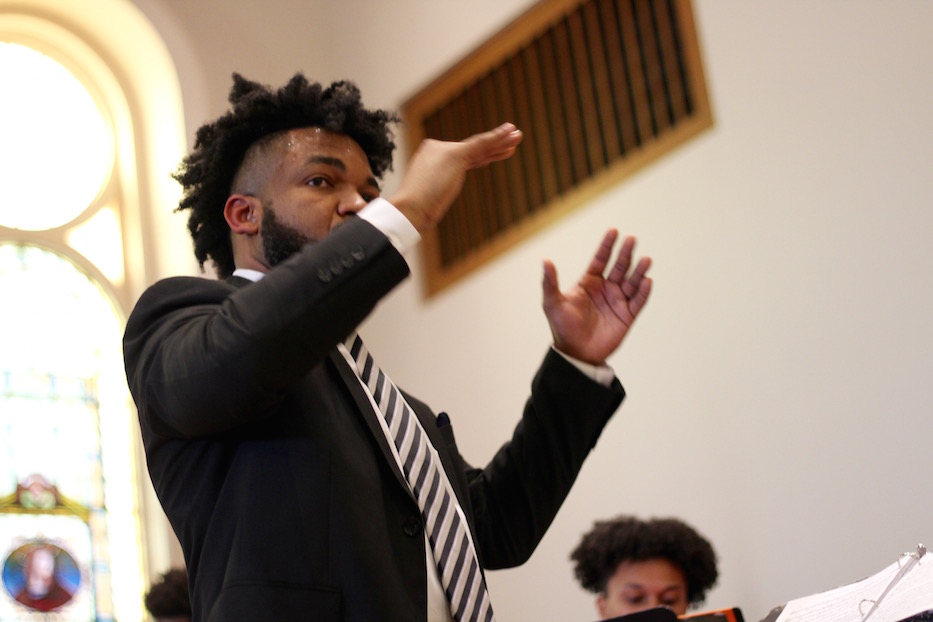 But with it also existed a resolve that was palpable: hundreds of people in the same space, listening to the same musicians who had worked for hours to get to a single point. Hundreds of ears that were reminded, in a single moment, that the arc of history bends more easily when there are several hands supporting it.

When he conducts, Joseph said, he remembers that the steel pan itself is a product of forced migration, enslavement, and diaspora. Centuries after enslaved Africans had their hand drums taken from them—and decades after the music has become a robust presence in the U.S.— he still turns to the instrument as a way to remember a history of resilience in the face of cruelty.

“He [King, Jr.] fought for freedom and equality,” Joseph said. “One thing about the steel pan instrument is that we also had to fight for a name for ourselves to make the instrument something. For me, it’s much bigger than myself and more about the instrument. It’s how we showcase this in a positive light.” 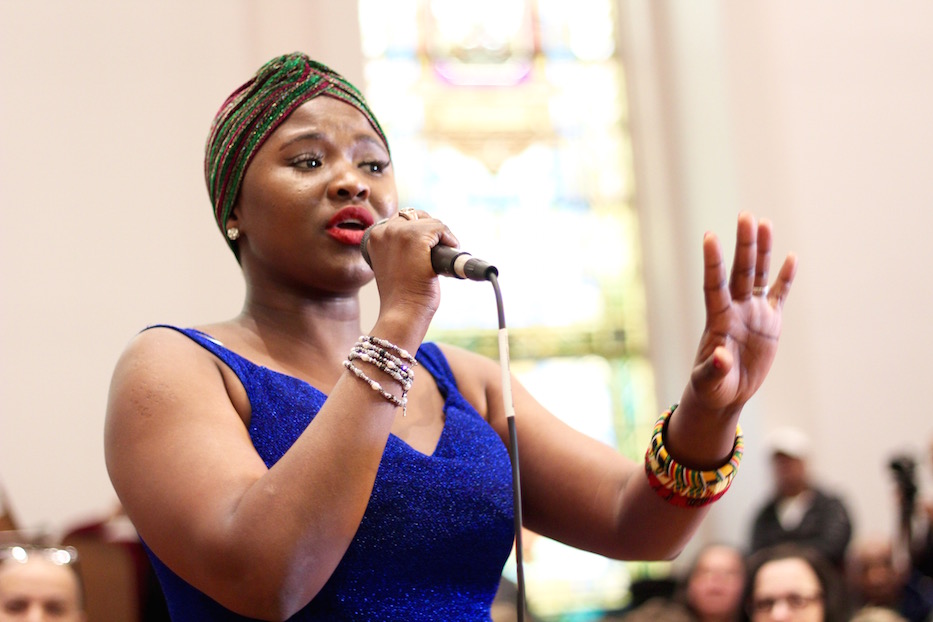 As she accompanied musicians, Thabisa deepened the set with one of her original pieces, “Thetha Inyani” as well as Mary Mary's “Can’t Give Up Now.” The first, she explained, means to “speak the truth”—which she arrived at the church ready to do.

The second, sung right from the gut, relies on a refrain that she has come too far to give up on what she believes in. Long before she had joined attendees in a finale of “Lift Every Voice and Sing,” she was preaching it through her lyrics. As a mom, an artist, and an advocate against police brutality, she said, she sees it as part of her work.

“I’m so thrilled that I’m involved with these young people,” she said after the concert, which marked her second MLK-related performance of the weekend. “To perform on this very memorable weekend … I need to leave people with a message. They need to be reminded that we need to do better. We need to speak up. We need to have these conversations in our houses, in our communities. We need to stand up with our brothers and sisters.”

“It [change] just has to come,” she added, noting the need for white parents to talk to their children about the legacy of race and racism. “Because it is moving too slow.”

To watch more from Monday's concert, click on the videos below.