"Student Power" Walks Out For Nelson 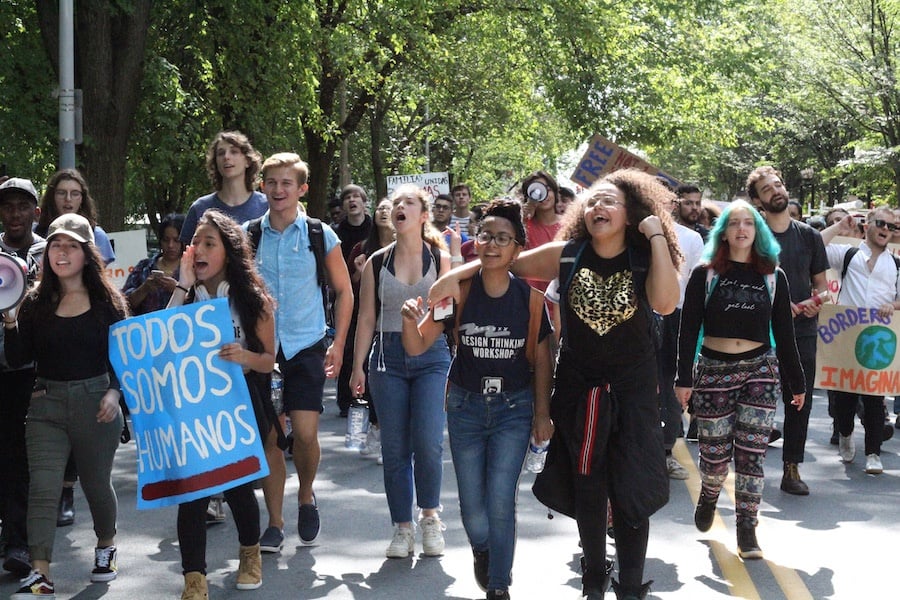 For Nelson and his family. For his teenage daughters Kelly and Arley, who are classmates and friends. For immigrants and refugees who should not be considered illegal. For themselves.

Thursday morning, these were just a few of the reasons over 250 students gave as they walked out from Wilbur Cross, Common Ground and James Hiillhouse High Schools and Yale and Southern Connecticut State Universities (SCSU) to rally at First & Summerfield United Methodist Church, where Nelson Pinos has been seeking sanctuary for 295 days and counting (read more about that here). Unidad Latina en Acción (ULA) representative Vanesa Suarez said that the action was student led, with assistance from ULA.

The action followed a call for student walkouts at a rally two weeks ago, held to bring attention to Pinos’ 281st day, or ninth month, in sanctuary. Since, Suarez said that students have been mobilizing in multiple schools. At 11 a.m. sharp Thursday morning, close to 100 students walked out of Wilbur Cross, leaving their classes, books and backpacks to gather on the sidewalks outside the school. At the same time, an estimated 80 students walked out of their classes at Common Ground High School, headed to the nearest bus stop to take the Whalley Avenue 243B downtown. Joel Tolman, director of impact and engagement at the school, said that students had registered for the action beforehand, and had the support of teachers and administrators to take part in the walkout. 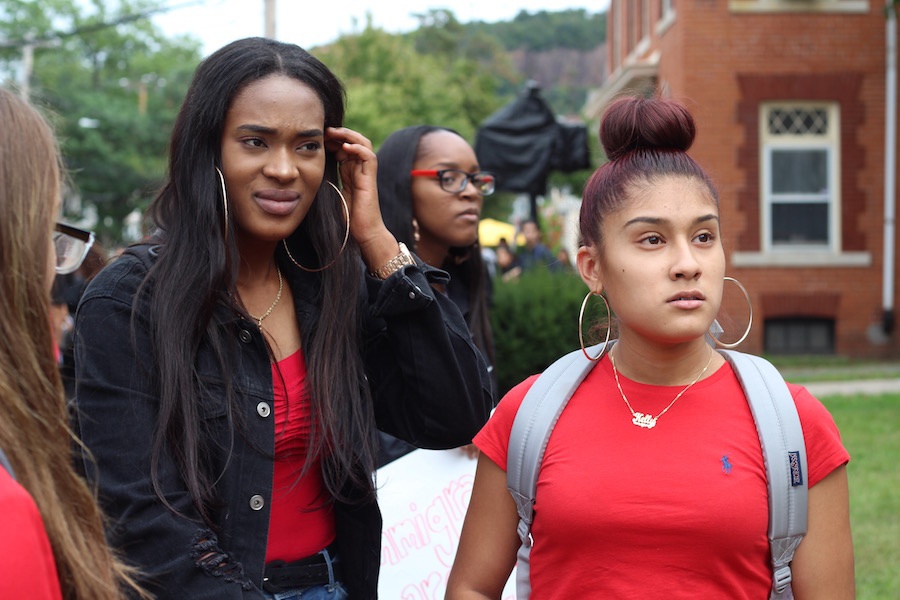 Back outside Cross, the number of students was still swelling. With friends on both sides, Pinos' daughter Kelly emerged, giving Suarez a quick embrace before she scoped out the crowd. Around her, students spoke in a mix of quick English and Spanish, some pulling out their phones to push the event to social media.

“I hope that what we’re doing right now helps people who are ruling the country to realize what they’re doing,” said a student who asked not to be identified by name. “They’re treating things like people have no lives and no feelings. We’re all humans, and you cannot like target someone to be illegal. I know Nelson is a really good person and I don’t understand why he has to be … I just hope that Nelson can have a better life.”

Around her, students launched into cheers of “Out of the classroom/into the streets!” “Keep Nelson home!” and “Let’s free/Nelson!” As Yale student Larissa Martinez looked on, trying to keep count, a few students continued to trickle out of the school, laughing and chatting with their friends as they waited for directions.

Holding a megaphone to her mouth, Suarez told the group that there had been some pushback from school administrators who wanted the students to take buses instead, but urged them to march the nearly two miles downtown on the sidewalks. New Haven Public Schools (NHPS) representatives who were present would not confirm this claim or give comments on the record; NHPS Operations Director Will Clark did not respond to multiple requests for comment. 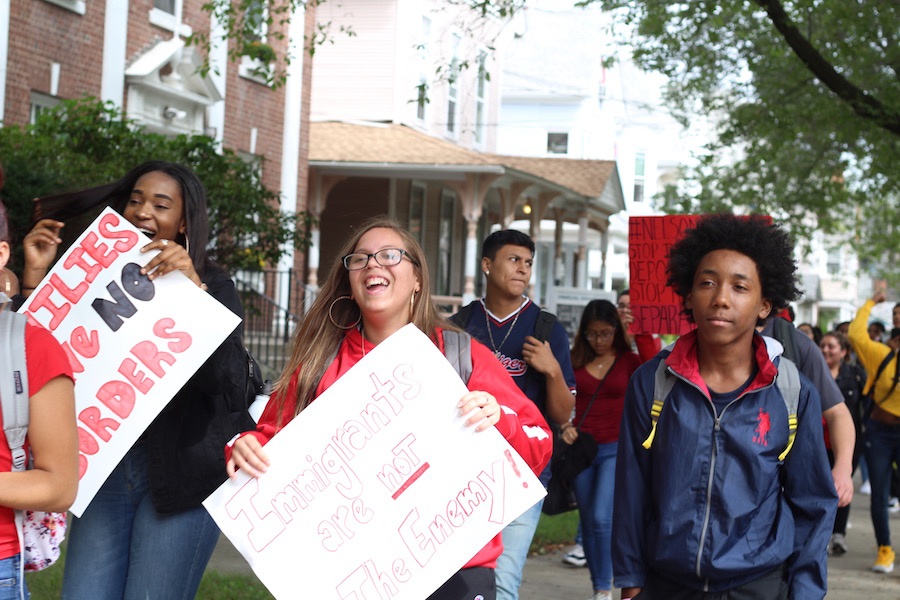 “As students, y’all know you have the power to take on these streets, to demand justice for your classmates, for your families, for your community,” Suarez said as students began to march down the sidewalk, some hoisting handmade signs above their heads or holding them out for passers-by to see. The mass hooked around from Mitchell Drive to Orange Street and formed a thick line, never venturing off the sidewalk.

“People have fought and have died for your freedom to walk out today, and to march in the streets,” she added.

As students filled the neighborhood with chants of “Keep Nelson Home! Keep Nelson Home!,” East Rockers came out onto their porches, some clapping to show support. Passing driver honked their horns and rolled down their windows to cheer. At the front of the line, Wilbur Cross sophomore April Artis led the group in chants of “What do we want? Nelson’s freedom! When do we want it? Now!”

“I’m here for Nelson’s freedom,” Artis said, taking a momentary break from chanting. “He’s a part of somebody’s family and he's getting deported. If that happened to my family—it’d be horrible. ”

As students reached downtown New Haven, they flooded Grove Street, leaving the sidewalk and walking alongside and between cars down Grove and onto Temple Street, then toward First and Summerfield on Elm Street (that video is below). Cross junior Ursule Mirindi jogged toward the front, a few friends following her back onto the sidewalk. 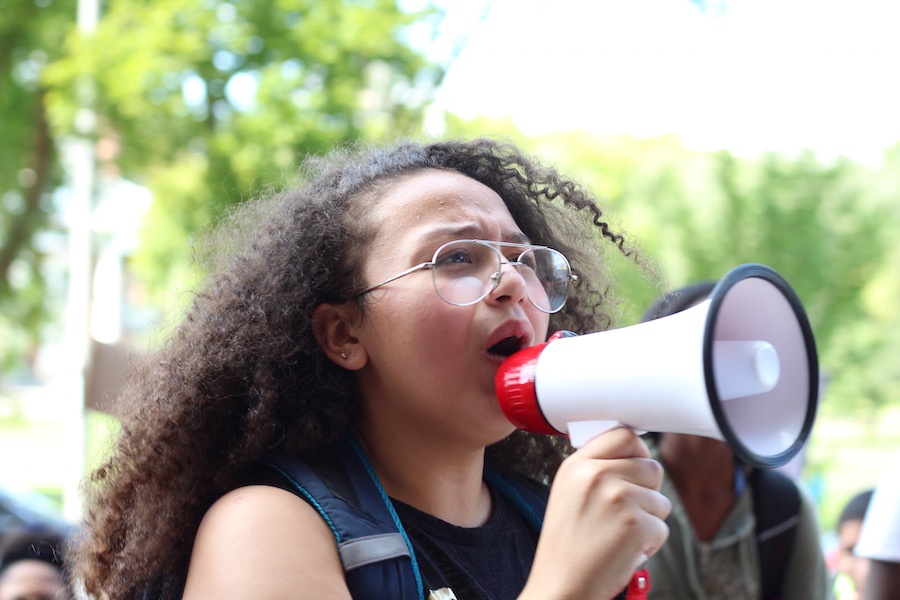 “I’m marching because I believe in the rights of everyone,” said Mirindi, who came to the U.S. as a refugee from Congo when she was 10, and is now 17. “Everybody is equal, and everybody should be welcome to live here, because the people that founded this country were immigrants, and no one should be illegal. Everyone is human.”

Just blocks away, a smaller group of students from Common Ground hopped off buses at Elm and York Streets, heading toward Phelps Gate with signs that read “Free Nelson Now!” “VOTE,” and “We Walk Out So Nelson Can.” Megaphone in hand, Common Ground senior Wilmarys Martinez (pictured above) directed them onto Yale’s old campus, a few undergraduates and passers-by stopping what they were doing to check out the group.

“We want Nelson’s freedom, man,” she said, pumping her fist in the air as she spoke. “And we want budget cuts to be over, done, because how are we supposed to help people like Nelson when we’re getting less than stellar education? We took the bus down here, but we’re walking for Nelson now.”

Joined by undergraduates and a few professors from Yale University and SCSU, students converged back at the church. Pinos greeted them, waving from behind the church’s steps and tall, black iron gate. Speaking quietly, he thanked the group for coming, ushering in a lineup of speakers that urged students to harness their "student power" and plan further walkouts, resist Immigrations and Customs Enforcement (ICE) officials in Connecticut and nationwide, and support an ongoing petition to work New Haven's symbolic "sanctuary city" status into the city's official charter. Both Suarez and ULA member and activist Norm Clement noted a petition that they are hoping to present to the city's Board of Alders for the motion. 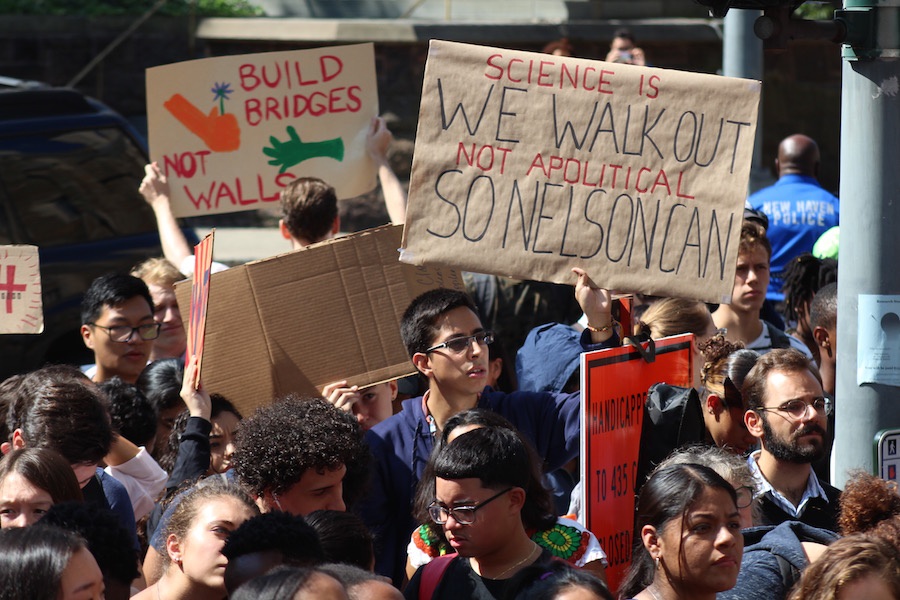 “I have never seen so many people,” began Pinos’ daughter Kelly, a junior at Wilbur Cross and the organizer of Cross’ chapter of the walkout. “Y’all don’t understand. This is pain. Nobody should have to go through this. We’re gonna go to City Hall, We’re gonna keep protesting.”

While the rally took a break for medical assistance—a student became lightheaded and passed out, said Suarez as students formed a line for medical officials to get through—it continued at the church, on the steps of City Hall and then the courthouse on Church Street. Before leaving the church, Suarez carried a microphone through the crowd, asking students why they had walked out in support of Nelson. One student said she supports immigration. Another suggested that "we are all one."

As students marched down Elm Street to City Hall, they kept the chants going, adding “Back up/Back up/We want freedom/freedom/Racist fascist borders/We don’t need ‘em/Need ‘em!” and “Show me what democracy looks like! This is what democracy looks like!” As they swarmed the sidewalk from City Hall to the nearby courthouse, Suarez urged them to harness and channel their “student power” into further walkouts and calls for legislative change on the city, state and national level.

Then just as it had swelled, the walkout wound down. As students marched back to the church, Pinos waited on the steps, a crew preparing pitchers of ice water and Salvadorian papusas for marchers and ULA members in the basement below. As marchers rounded the corner, he waved from the church, a big smile on his face. As they gathered on the steps and sidewalk, he raised his arms above his head. 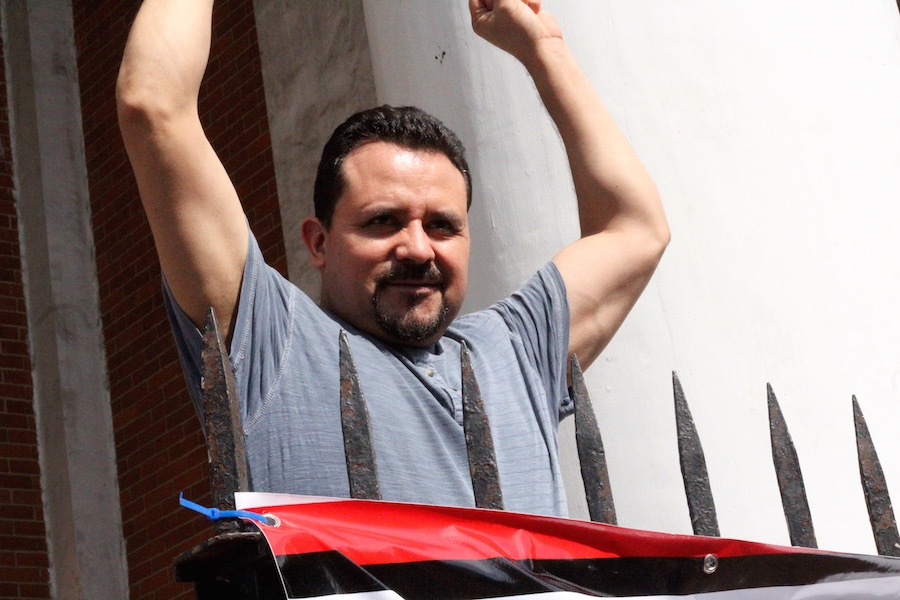 “With the support of the community, it’s very powerful to me,” he said minutes later, back in the basement of the church. “It’s telling me that I’m not alone. I think that’s what’s giving me the strength to keep fighting.”

“It’s not just for me,” he added, noting the four immigrants taking sanctuary across the state, and tens more across the country. “I have people always here, I have my kids every day. I wouldn’t know how I would survive if I don’t get to see my kids.”

Of his battle, for which there is a case pending at the Board of Immigrations Appeals in Virginia, he said he plans to stay at the church “As long as it takes.” But, he added, if his lawyers tell him that nothing else can be done, “I have to make a decision ... I don’t think anyone wants to be in a church forever.”

For more from the rally and march, click on the videos below or check out The Arts Council of Greater New Haven's video feed on Facebook.