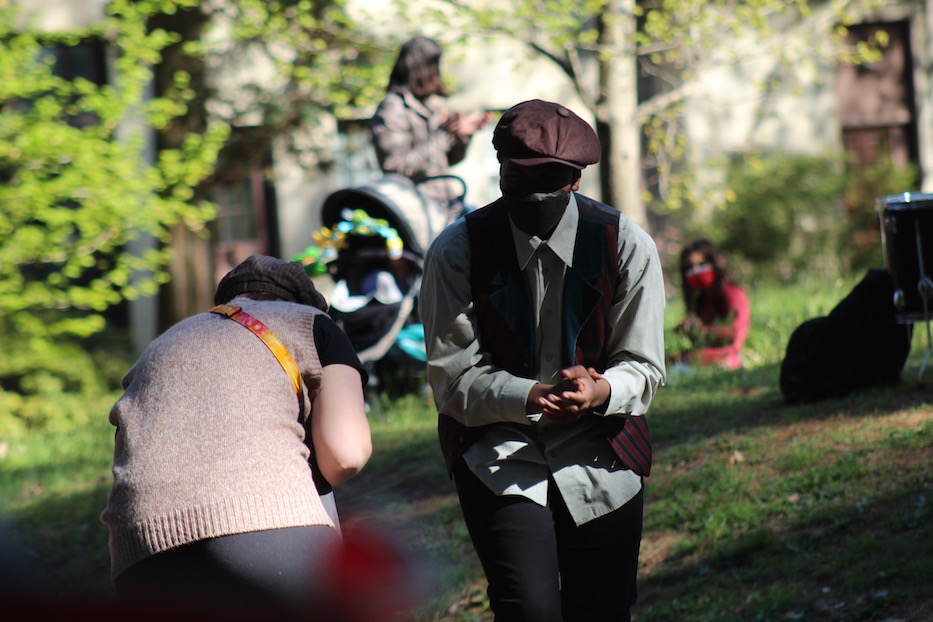 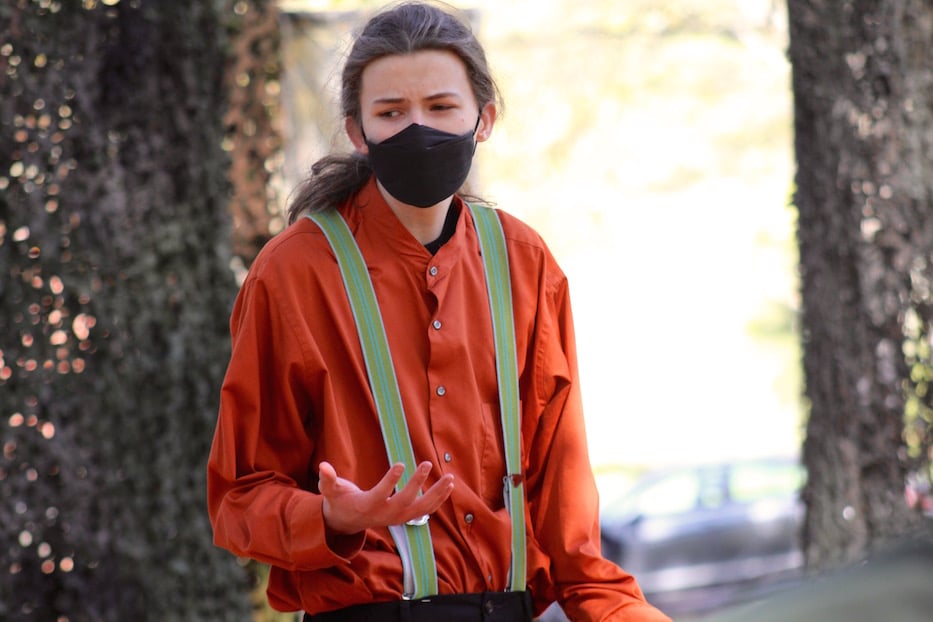 Oliver Barber as Orlando for scenes 1.1 through 3.1 at Saturday's performance. Lucy Gellman Photos.

Two Orlandos stood in the clearing, taking each other in. At first glance, they were identical: same orange button-down shirts, same hanging gold pendant, same black pants, black masks and green-and-white suspenders. In the background, birds chattered and warbled at the sight. The two stared for a moment wide-eyed, and then one whirled offstage. From just feet away, members of a small, masked audience clapped and cheered.

Last weekend, 16 members of Elm Shakespeare Company’s Teen Troupe returned to Edgerton Park for a weekend run of William Shakespeare’s As You Like It, their first public performance since Halloween of last year. Directed by Benjamin Curns and choreographed by Ariel Meyer, the performance doubled as a teaser for a summer youth theater festival that the company is planning this August.

“This play, which is a fairly popular title, is one of the Shakespeare green world plays,” said Curns, who is the organization’s resident teaching artist. “I like this idea that they come into this new world and it’s really foreign and scary, and then they get there, and they’re like ‘It’s okay. I kind of like it here.’” 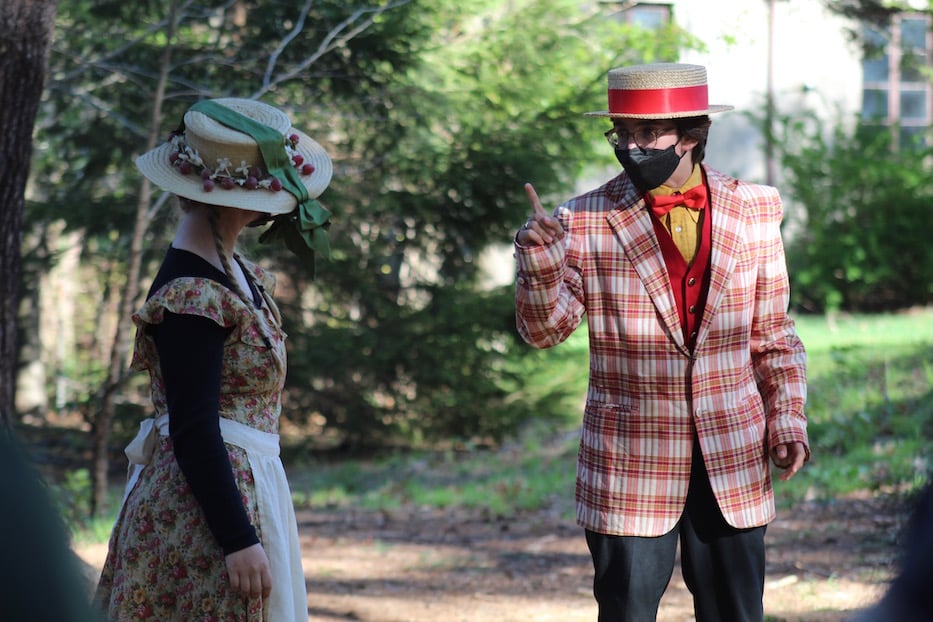 As it unspooled on a green hill Saturday, it felt right on time for the moment. At its core, the 1623 play is about Orlando (Oliver Barber and Arthur Aiken) and Rosalind (Emma Kennedy and Emily Finch), whose sweet love for each other is almost thwarted by personal greed and a number of petty family disputes. Rosalind’s uncle Duke Frederick is a miserable guy who sends her father, Duke Senior (Maddie Valentino), away from the court. Orlando, meanwhile, struggles with his wealth-hoarding brother Oliver (Cedric Wescott), who also wants to kill him.

Oliver wants to keep all of his dad’s money, so he asks Frederick’s prize wrestler (Xander Banks) to kill him in a match. When Orlando defeats the wrestler instead, Frederick is so angry that he banishes Rosalind from court. Not, of course, before she and Orlando have a chance to meet, and realize that they are totally hot for each other. When they both must flee, the plot unfolds in the forest where they unwittingly both find themselves. Like the Oprah-Meghan interview, but make it Elizabethan.

The Bard pulls out some of his greatest hits—physical farce, drag and charade, punny language, interwoven subplots and some truly terrible poetry that pokes fun at his own craft. In the teen troupe’s hands, it found a perfect formula: 16 young people dealing with remote learning, social isolation, quarantine-era claustrophobia, a literal plague, and the emotional stew of teenagedom. There is, perhaps, no better group to act out this strange and funny interpretation of complex, hormonal and at times befuddled humans released back into the natural world. 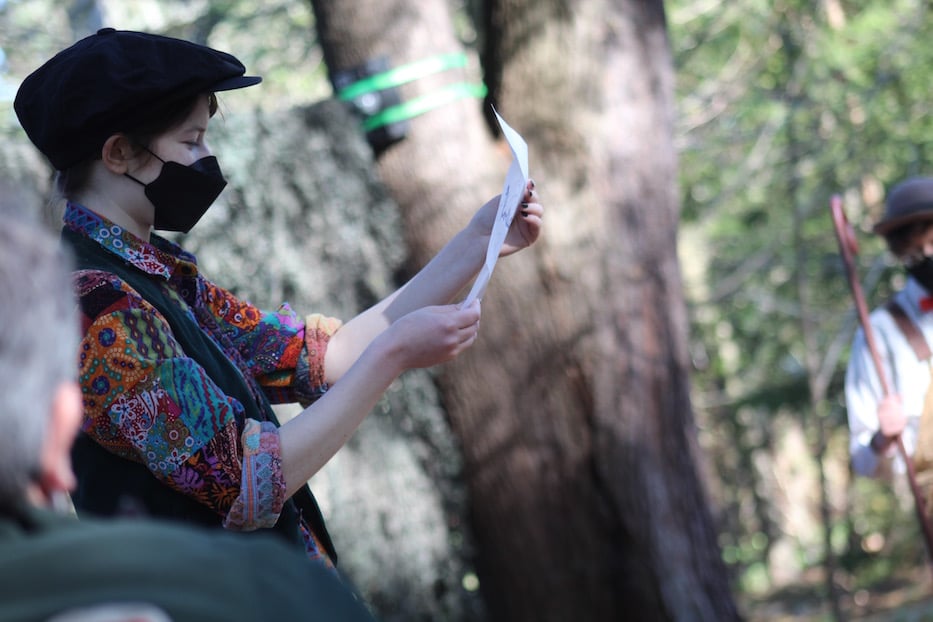 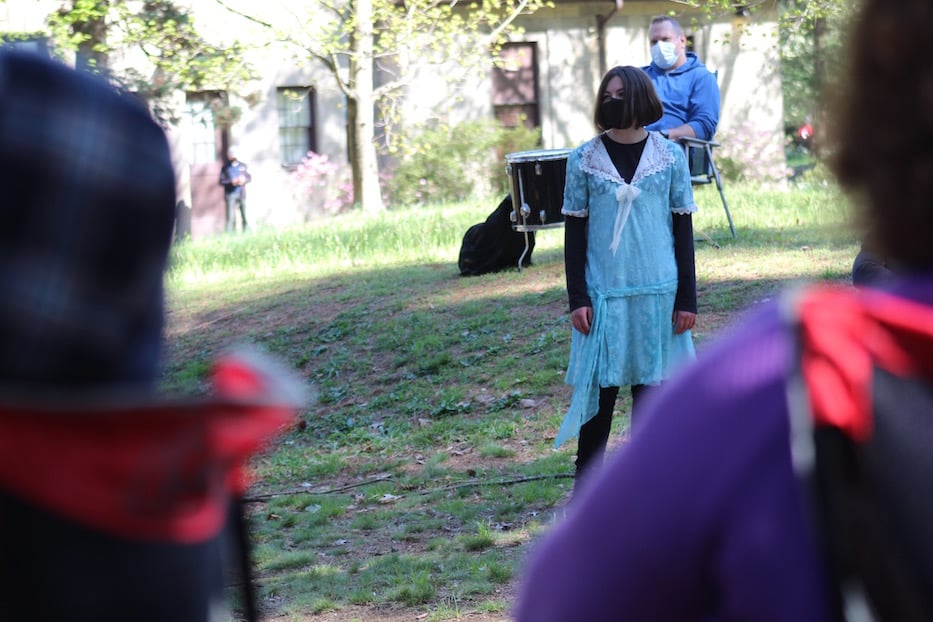 The performance was months in the making. To get to a full show, teen troupe members pushed through weeks of rehearsal both on Zoom and in person. When rehearsals began in February, there was still a thick cake of snow and ice on the ground, which meant that the troupe was entirely online. Weeks later, the Edgerton Park Conservancy gave Curns permission to rehearse in the park’s carriage house—as long as there were no more than seven people inside at one time.

It meant rehearsing in shifts, instead of as a full ensemble. Students did not experience the work in its entirety until they moved outside a few weeks ago. Instead of seeing it as a hurdle, Curns used it to his advantage: he added Orlando and Rosalind doppelgängers that riffed on the disguises baked into the play. In addition to the script, he folded in dance, cautious singing, and creative movement.

As actors brought the work to life in Edgerton Park, that piecemeal process didn’t seem to be a problem. Walking through an ivy-covered curtain strung between two trees (props to set designer Brendan Fuller), actors burst onto a grassy stage, sometimes surprised to see a live audience cheering them on.

For a moment, the beginning of Saturday’s performance seemed surreal: real performers in three-dimensional space, unmediated by WiFi connections and one-inch boxes. Shafts of sunlight broke through the clouds and onto the stage. The park became a perfect location for the Bard’s Forest of Arden, the trees as flowers bursting into bloom as if on cue. Behind the actors, chickens pecked and strutted on in a coop, unaware that magic was about to take place. 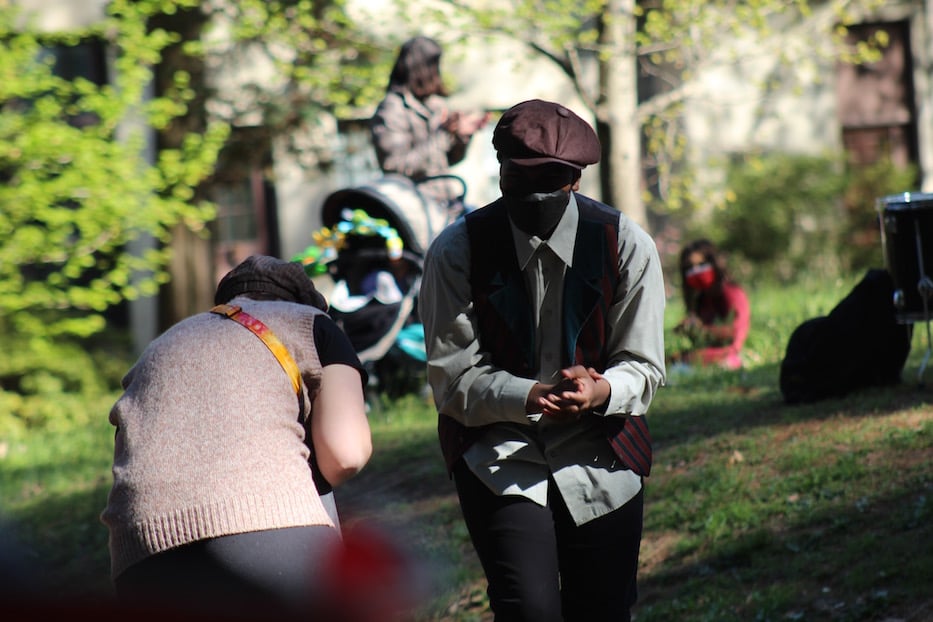 From the moment that Oliver and Rosalind locked eyes, actors mined the text for all the joy and wit with which Shakespeare wrote four centuries ago. In an early scene, Orlando (Barber) and Charles the Wrestler played up the choreographed nature of pugilism, exposing it for the silly, toxically masculine dance that it is. Later in the play, Banks played the shepherd Silvius for sympathetic laughs while Silas Well hammed it up as Touchstone, the court’s jester.

Often, actors waded through Elizabethan language—a feat that some adults still don’t manage to pull off—to find the timelessness and bite underneath. As the play’s first Orlando, Barber took his time with “What passion hangs these weights upon my tongue?,” translating its full romantic heft with a slow, sweet rumination that made room for its self-consciousness. So too when Rosalind played “he calls us back!” loudly for the present day, despite the absence of texting and FaceTime on stage. In the Forest of Arden, Amiens and Dennis (Jeremiah Godley and Nina Renkert) gave the play wings as they began to sing. Renkert’s voice rose as Godley motioned for the audience to clap along.

In that sense, they also made it just right for 2021. Rosalind’s line to “Ay, marry, now unmuzzle your wisdom” hit differently when it was delivered through a medical mask, to an equally masked audience. So too “all the world’s a stage,” as a tragedy of epic proportions continued to play out across the globe and a dim, flickering light persisted at the end of a long tunnel. 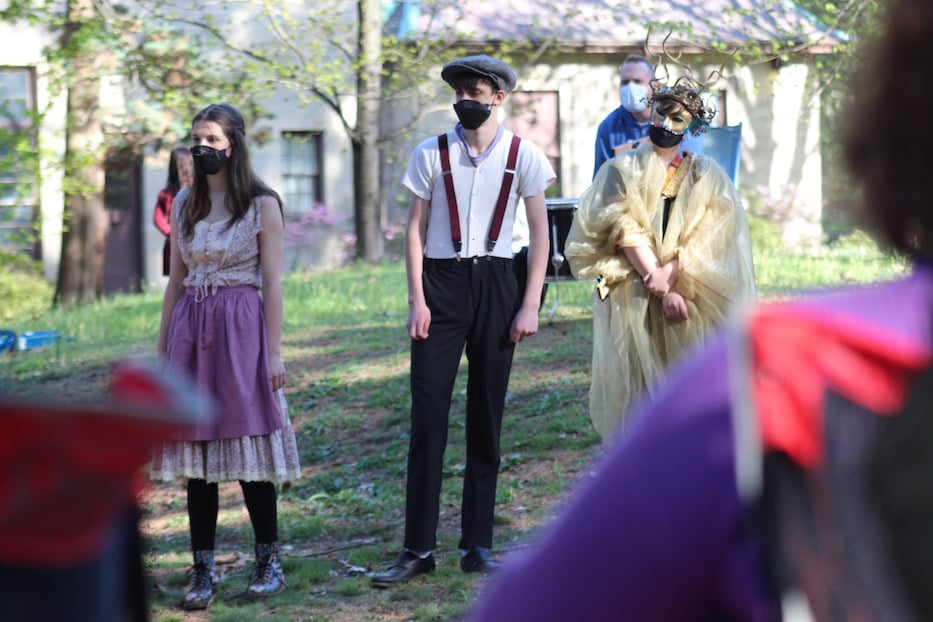 Curns added that the play, which is full of “heart and intellect,” seemed like the right call in a year upended by Covid-19. Shakespeare’s bloodier plays—Macbeth or Titus Andronicus, scenes from which students mastered last year—didn’t feel right. After Saturday’s performance, several members of the teen troupe said they were also excited to dive into the text and to get back to live performance.

Charlotte James, who played Phoebe, said that she hadn’t acted in two years when she found herself returning to the teen troupe. A freshman at Hamden High, James said that coming back to acting gave her immense joy.

That was also true for Emily Finch, who played Rosalind in the second half of the show. Because of the cast’s staggered rehearsal schedule, she didn’t see the first half of the show until the group started outdoor rehearsals. She recalled sitting on the gentle slope of a hill, watching her character’s exposition and story unfold before she jumped in.

“I had such a wonderful time being part of this show,” she said. “It’s been crazy coming back into theater after this year.”

A sophomore at Common Ground High School, Godley said that the performance is helping him emerge from a dark, Zoom-plagued pit of remote school and social isolation. During the past 14 months, “being on Zoom, it really brought down my commitment from a 10 to a five,” said. When he returned to acting outdoors, he felt more like his pre-Covid, fully committed self. He was able to be present. He can’t imagine a better vehicle for that than Shakespeare.

“These stories were written so long ago,” he said. “And we’re telling them.”

Elm Shakespeare will continue telling those stories this August, as it returns to the park for its inaugural Youth Shakespeare Festival. More information about that is forthcoming on Elm Shakespeare’s website.