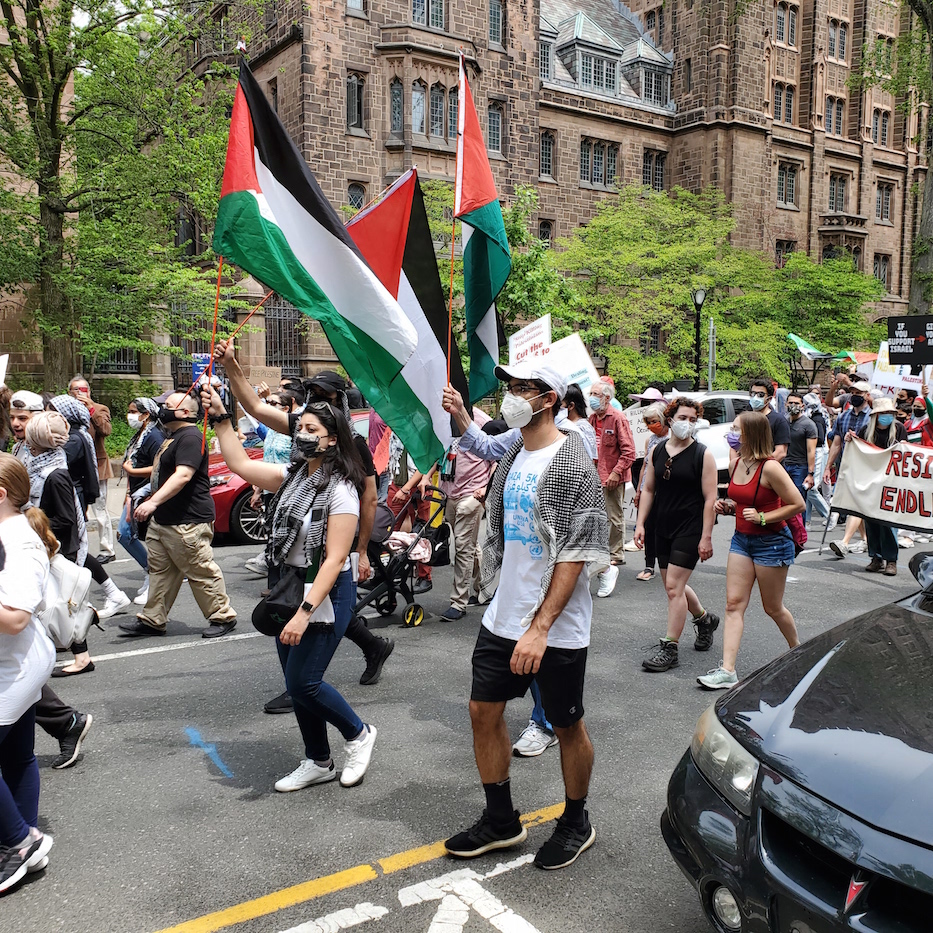 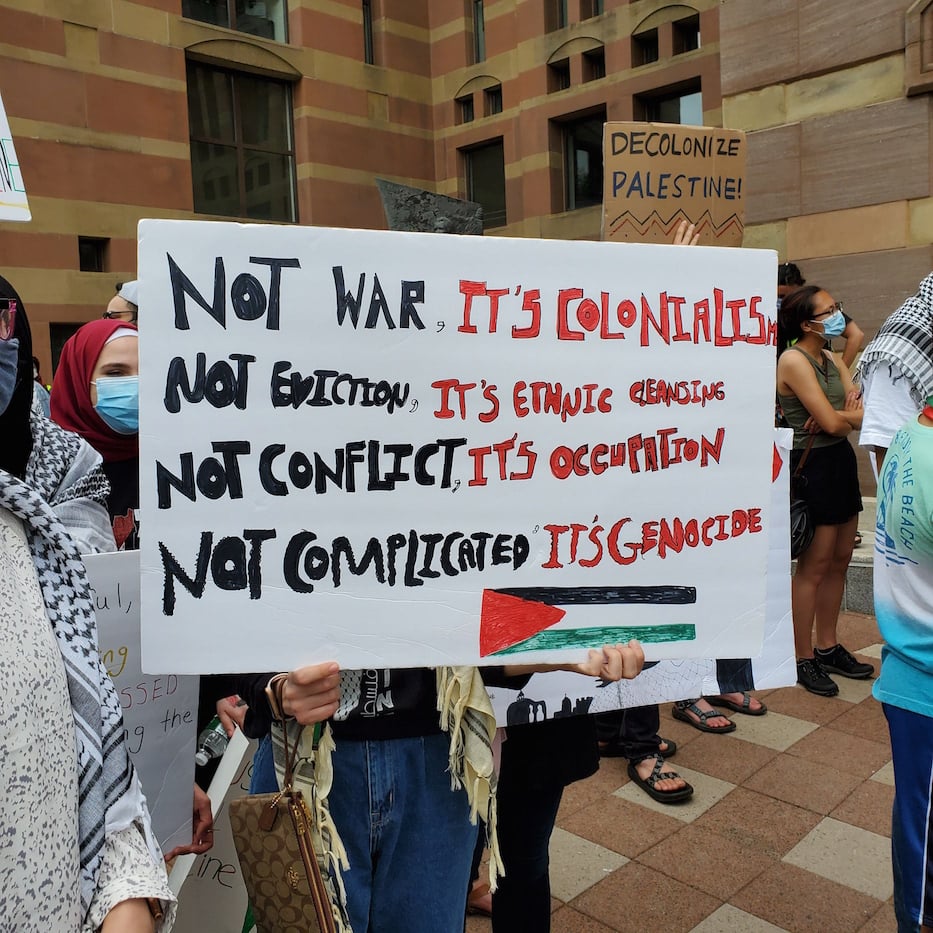 A photograph helped end the Vietnam War. Now, Faisal Saleh is wondering what work of art from Palestine will summon the same sense of responsibility among viewers worldwide.

Saleh is the executive director of the Palestine Museum US, tucked off the Litchfield Turnpike in Woodbridge. Saturday, he asked that question in front of New Haven's City Hall, at a rally that connected human rights abuses, state-sanctioned violence and attempts at ethnic cleansing in Colombia, Israel and Gaza, and the United States. Hundreds of New Haveners gathered downtown to march, gather and hear remarks, which came from city- and statewide organizers and activists.

The rally came from community organizers and activists across New Haven and the state, including members of the Semilla Collective, the Tree of Life Educational Fund, Reclamation and Survival, Mending Minyan, Jewish Voices for Peace New Haven, Middle East Crisis Committee, Promoting Enduring Piece, and chapters of Students for Justice in Palestine at the University of Connecticut, Wesleyan, and Yale among others.

It comes amidst ongoing protests in Colombia, where President Iván Duque has deployed military forces against thousands of protesters following a proposed tax hike on goods that are already prohibitive for most of the country's population. For over three weeks, they have gathered to decry poverty, economic suppression and skyrocketing rates of Covid-19. Over 40 protesters have been killed, many by members of law enforcement.

“I can't stay silent while the U.S. government quietly pours billions of dollars into a dictatorial government that is terrorizing my people and violently undermining their rights to life and self-determination,” said Camila Güiza-Chavez, who is a member of the Semilla Collective, fellowship director at Havenly and a first generation Colombian. “In the same hand, I am marching to demand that the U.S. stop financing the apartheid state of Israel. I want freedom for all our people around the world, from New Haven to Gaza to Cali.”

It also followed the Palestine Museum’s now-annual Palestine Art Week, a series of lectures, performances, film screenings and conversations that highlighted artists working across the Palestinian diaspora. This year, events unfolded against the backdrop of Israeli airstrikes and rocket fire from Hamas. As of Friday, Al Jazeera reported that 12 Israelis and over 230 Palestinians, including almost five dozen young children, have been killed. 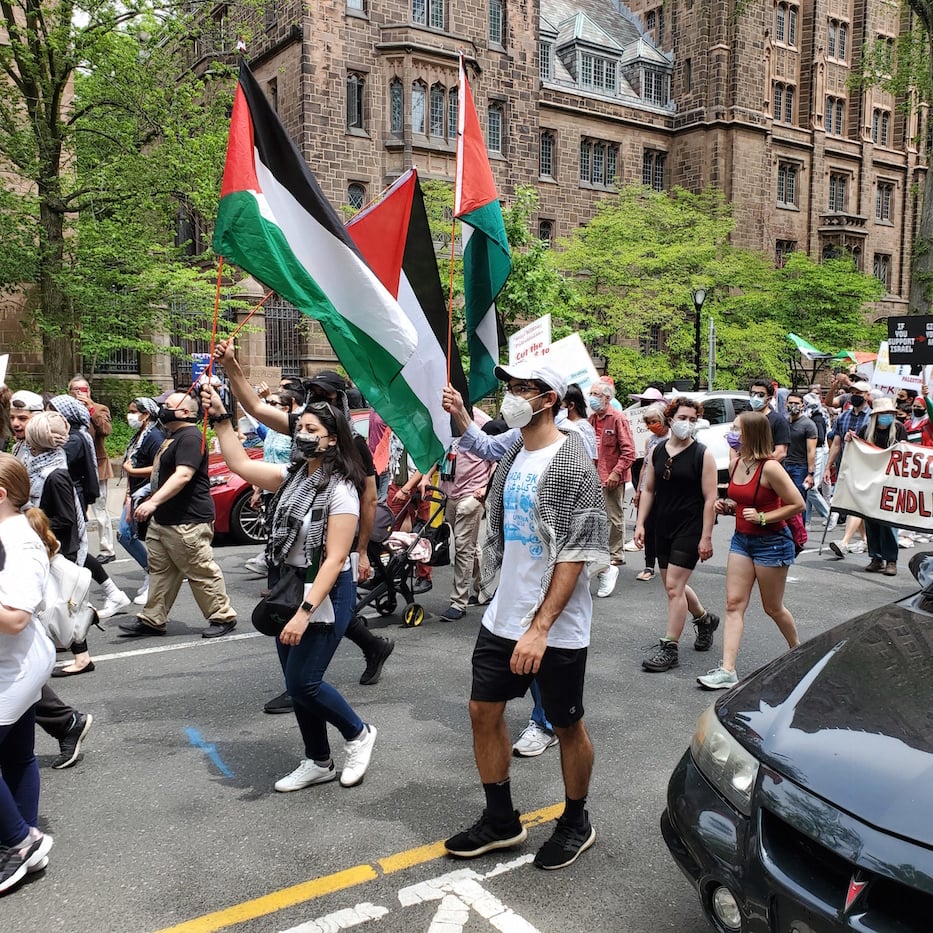 The comments fit the larger tenor of the event, during which several speakers urged attendees to contact their elected federal officials—particularly U.S. Sens. Richard Blumenthal and Chris Murphy, and U.S. Rep. Rosa DeLauro—to move on both actions like the Boycott-Divest-Sanction (BDS) Movement and two specific pieces of legislation intended to curb human rights abuses and U.S.  military involvement in Israel and across the globe.

The first, proposed by Minnesota Rep. Betty McCollum, would prohibit the Israeli government’s use of U.S. taxpayer dollars to “support the military detention of Palestinian children, the unlawful seizure, appropriation, and destruction of Palestinian property and forcible transfer of civilians in the West Bank, or further annexation of Palestinian land in violation of international law.” In other words, the bill (read its full text here) seeks to push back against perceived theft of land that is a feeds a centuries-old conflict, and has continued through the proposed eviction of Palestinian families in the Sheikh Jarrah neighborhood of East Jerusalem.

The second is the Leahy Law, a measure through the U.S. State Department and Department of Defense that cuts off U.S. military aid to countries committing gross violations of human rights. Those include but are not limited to torture, detention without bail, trial, charges, or due process, kidnapping, genocide, and rape. Saturday, speakers pushed for its use to end U.S. assistance to the Colombian government.

Multiple times throughout the rally, speakers also pointed to the vital role artists play in their fight for liberation—and sometimes ended their remarks in song, poetry, call-and-response, and prayer. Members of Mending Minyan, a group that subscribes to a "Judaism decoupled from Zionism," presented poetry and speeches from members who rode atop a truck, shoulder to shoulder with fellow organizers in a show of coalition building.

“I’m here speaking as a Jew in solidarity,” said Mikveh Warshaw, who helped launch the group during the high holiday services at the Palestine Museum three years ago. “But more than this, I am a Jew with other Jews in joint struggle—because we know that our lives, our futures, our liberations are tied together. No one is safe under apartheid. Under colonization. Genocide saves no one.” 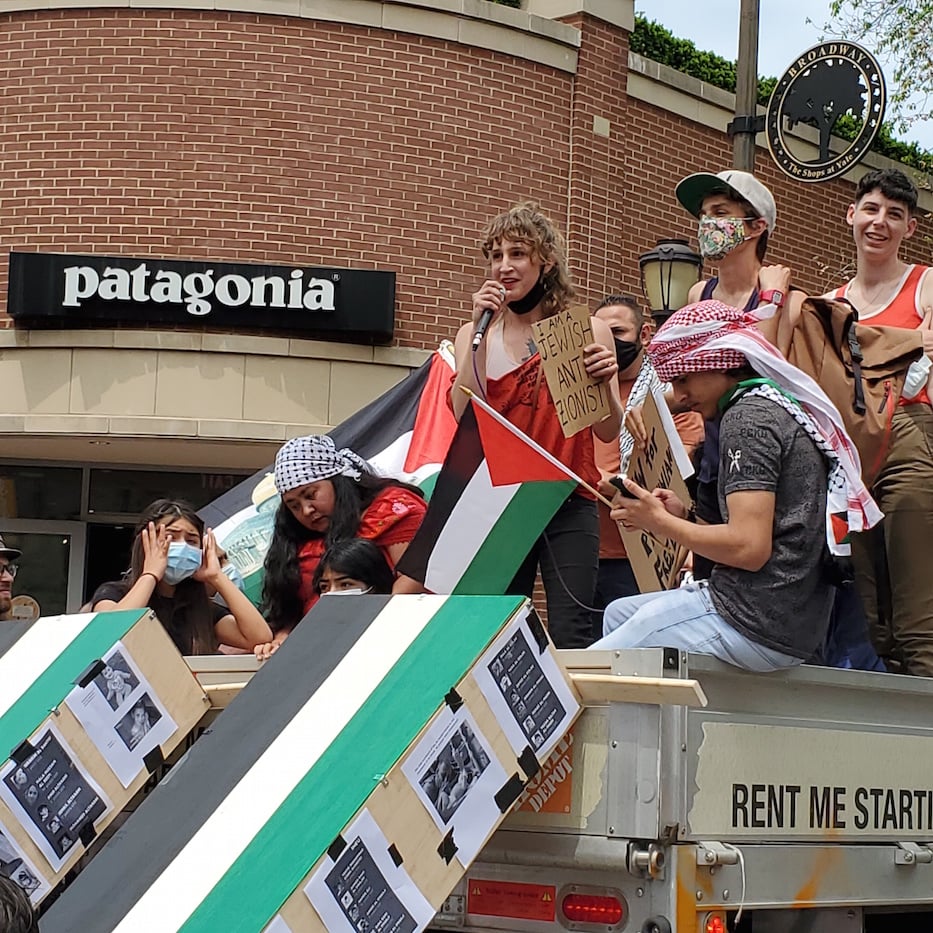 Mikveh Warshaw (with mic). She is surrounded by Fatima Rojas and her daughters Ambar and Jade Santiago Rojas, all members of the Semilla Collective, as well as Caroline Scanlan and Dominic Warshaw.

Basel, a member of American Muslims for Palestine Connecticut who also spoke last week at a rally in Hartford, pointed to cultural erasure as another form of violence. During the rally, several in the crowd held Palestinian flags high, lifted in arms and waved from lampposts that attendees climbed.

“Our entire lives, we have been told to suppress our ‘Palestinian-ness’—our culture, our food, our traditions,” he said. “We cannot allow this to happen. Israel is not just attempting to erase the Palestinian people—they are also trying to eradicate and steal our dances, songs, roots. This is why it is so important that we celebrate ourselves and perpetuate who we are as Palestinians from Palestine all the way over to here. We must resist and show unity within ourselves. We will not let them erase us.”

Saleh referenced a photograph widely known as "Napalm Girl," a still, black-and-white image taken by Associated Press photographer Nick Ut in June 1972. In the image, nine-year-old Phan Thị Kim Phúc runs toward the camera. She has stripped her clothes off because they are on fire and is screaming in pain. Ut, who is Vietnamese, took her to a hospital where she survived horrible burns on her body. He later won a Pulitzer prize for the photograph.

Saleh said he knows that the same image is out there today—and he and his colleagues are determined to find it. Through the museum last week, the artist Samia Halaby chronicled the work artists have done for the past 50 years in the name of liberation, including many who lived in exile and dedicated their lives and careers to the cause. For the past two weeks, the Palestinian artist Malak Mattar has been documenting attacks on Gaza in real time, with updates to let social media followers know that she is alive. On Friday, Mattar posted a message that she had survived the week.

"The choices are clear: apartheid or democracy,” Saleh said. “We want the U.S. to stand up for its own values. Stand up for Democracy. Justice for all, not justice for some. That's what this country was built on, and that's what we're demanding."

Reporting includes additional information from organizers Shosh Lovett-Graff and Francesca Maviglia. In the interest of full disclosure, the Arts Paper was not on site Saturday and collected reporting through video and interviews after the event.