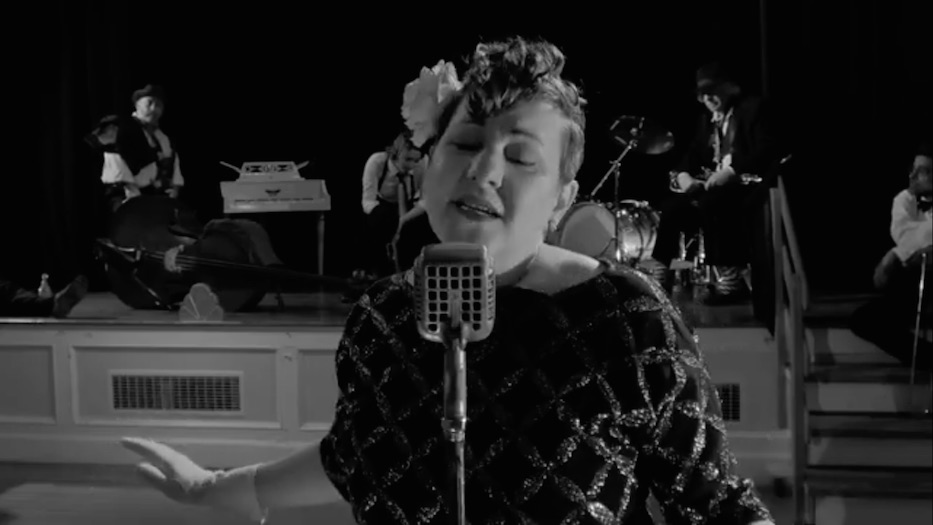 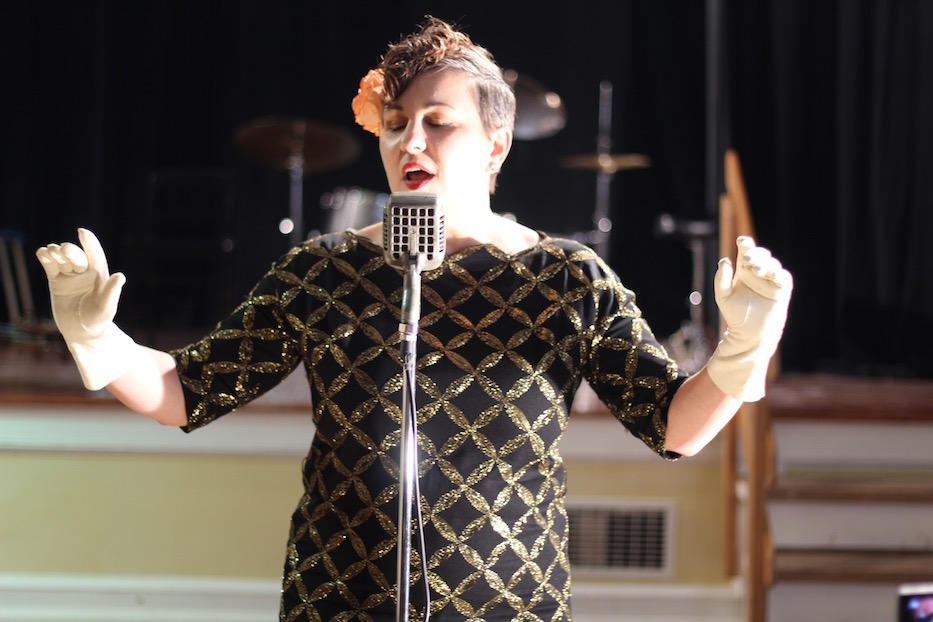 Cynthia Astmann filming for "Mazel." She removed her mask only during her lip-synch, when she was over six feet away from people. Lucy Gellman Photos.

The singer sways at the mic, gliding into one last song for the night. Behind her, the band looks on, ready to pack up. An accordionist approaches, still playing. The singer caresses the mic, spots the musician. Her hands, gloved, flutter like tiny birds. Her arms reach out to their full wingspan. As the accordionist sits, she touches them lightly on the shoulder.

The singer is Cynthia Astmann, a member of the Nu Haven Kapelye who has helped make a pandemic-era music video into a reality. Thursday night, the group dropped a cover of the 1938 song “Mazel” just in time for the final night of Hanukkah. It is the brainchild of band member and teacher Jay Miles, with cameos, production help and sound mixing from fellow bandmates and musician Steve Rodgers. As a final Hanukkah gift to New Haven, jazz soloist Frank London appears on trumpet.

"It all kind of came together, and I'm just really delighted,” Miles said in a recent phone call. “For me, it was incredibly needed. This is what I do. I do things with people. With Covid, you’re usually in a different room, and the cables are the only thing you're interacting with. It was really invigorating, and really special, to see these people. I feel really lucky.”

The concept was born earlier this year, as the group grappled with the reality of missing its December 25 show for the first time in decades. Normally, members gather at Congregation Mishkan Israel to play a raucous klezmer show on what much of the world recognizes as Christmas. This year, spiking COVID-19 rates made that possibility unthinkable. The Kapelye agreed that it wanted to do something. It just wasn’t sure what.

Miles couldn’t bear the thought of “another video with tiny boxes,” he said. Earlier this year, he worked with members of the group to churn out a celebratory Passover video. At the beginning of Hanukkah, they dropped a recording of “Mah Yofus” that followed the same format, with a cameo from Music Haven’s Erector Square space. He started thinking about a short music video, with real people acting out an entire story as they socially distanced on and off screen.

“Mazel” seemed like the right fit. The song comes from the 1938 film Mamele (Little Mama), a Polish musical production recorded entirely in Yiddish. As he listened to the song, Miles could see a whole plot unfolding. A glamorous musician (Cynthia Astmann) walks through the night-kissed streets of New Haven. A mysterious woman (her real-life wife, Dana Astmann) follows her in a pinstriped wool suit and fedora. A viewer doesn’t know whether to be thrilled or frightened, or maybe both. 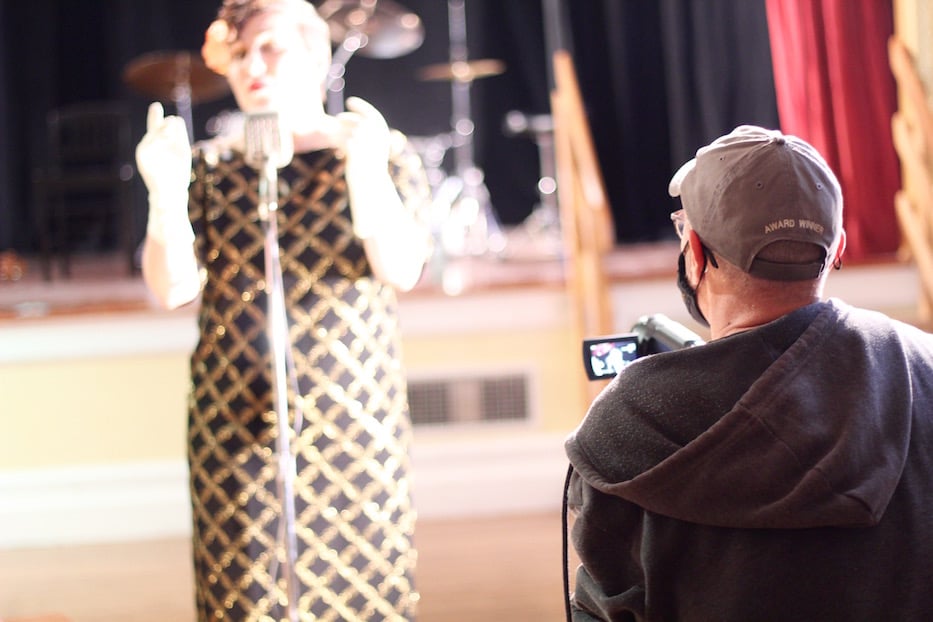 The final cut, filmed between downtown New Haven and the Whitneyville Cultural Commons in Hamden, is Night In The City meets La La Land. As the film opens, a camera does a slow, black-and-white pan over The Graduate New Haven itself a sign of the changing times. Astmann exits in a winter coat and heels, clearly on her way to somewhere. The frame shifts, and suddenly she is crooning into a vintage mic, one glove wrapped around its stand. The camera cuts away, and two listeners sit at a cloth-covered table, half-listening.

In a series of flashbacks, the viewer is left to assemble the story of the night. There are couples laughing over empty cocktail glasses, musicians-turned-actors folding and unfolding maps and puzzling over the evening news. London, dressed in a vintage suit, bobs mysteriously in and out of shots with his trumpet. With her accordion, Astmann drums up enough suspense to keep a viewer watching through the end.

It’s nostalgic, channeling both film noir and an era when going out, performing live, attending concerts and eating indoors weren’t all potentially lethal activities. In some ways, it’s a love song to life in the middle of the twentieth century. In others, it’s one to life just nine months ago.

When Miles originally reached out with the idea, Kapelye members filled in the blanks. Bass player David Chevan stepped in to arrange the piece. His wife Julie snagged costumes from the drama department at Amity High School, where she is a teacher and students had just finished recording a radio play. Their son Noah was able to help master the sound. 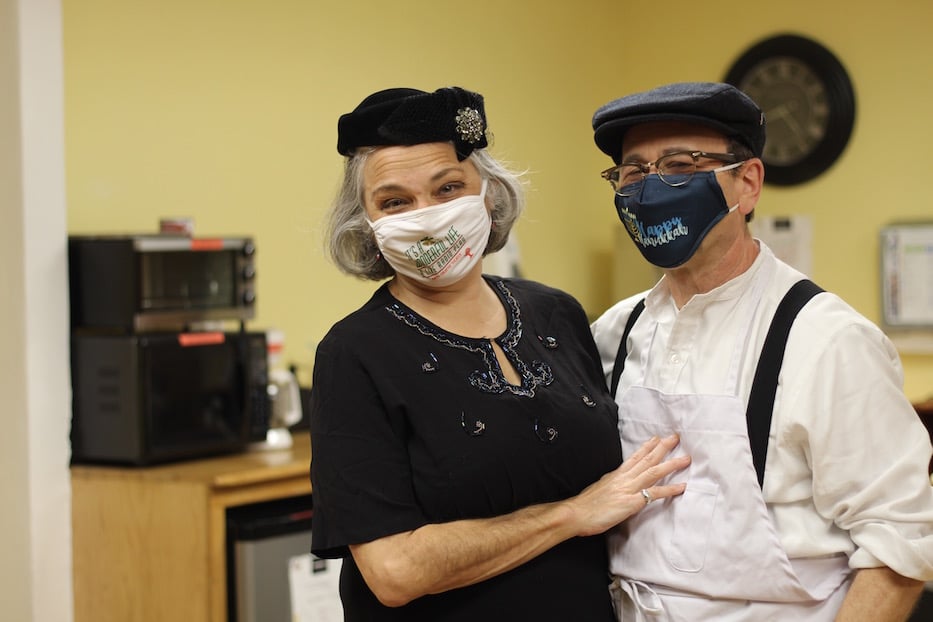 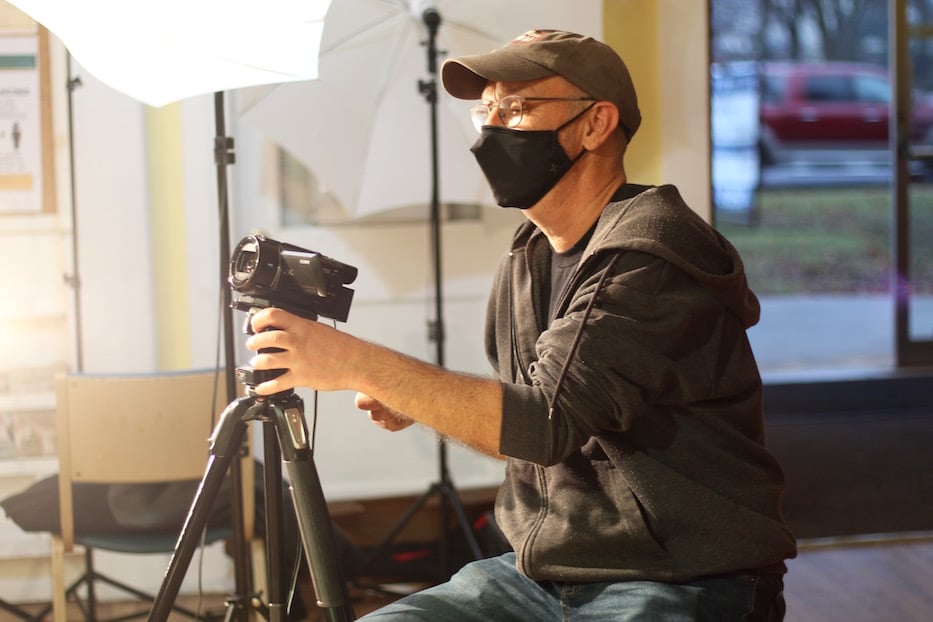 Musicians who weren’t comfortable in the space recorded in isolation and sent their tracks to Miles. A few who were—almost all couples and families who have been isolating together—got a set of ground rules. Masks were in. Hugging and handshakes were out. So were instruments that could spread viral droplets, which had been recorded beforehand.

“Everyone is just so hungry for interaction,” said Julie Chevan as she adjusted a floppy hat and silvery brooch. “Usually this time of year, they’re gearing up for a concert. I think everyone, even if they don’t realize it, is like ‘something’s missing.’”

Last weekend, they flowed in and out of the Whitneyville Cultural Commons, arriving in timed slots to maintain social distancing and follow statewide public health guidelines. Between scenes, Dana Astmann called the video a sort of balm for 2020. As an arts administrator for Tessitura Network, she’s watched hundreds of arts organizations across the globe struggle to get through this period.

Some have shuttered. Others have issued layoffs and furloughs in multiple waves. For months, she hasn’t been able music with anyone in person. Her first concert was a tiny Hanukkah show at Tower One/Tower East, for which she needed to be tested beforehand and perform several feet from residents. 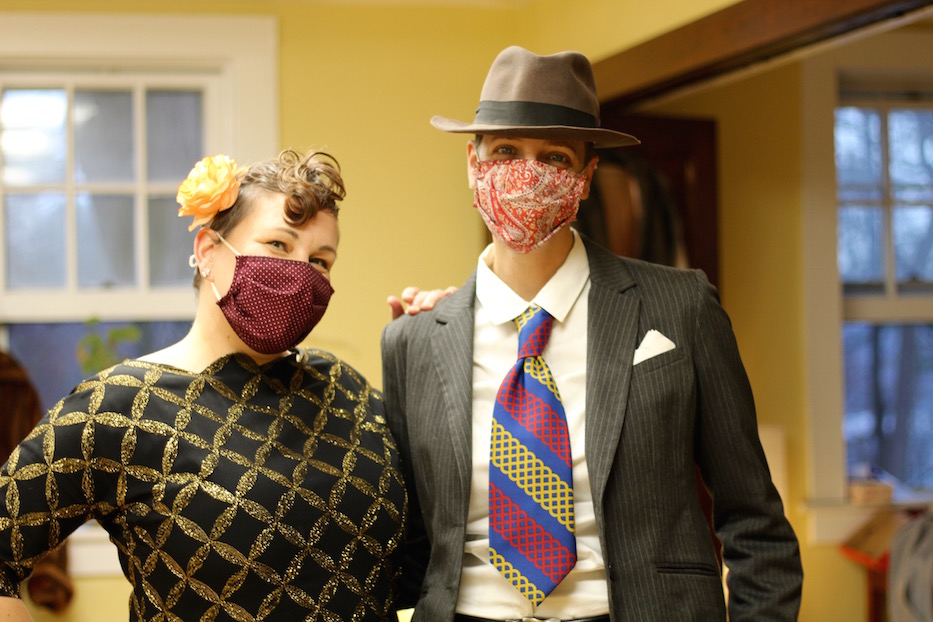 “I think a lot of us are so starved for something to do that this was the solution,” she said. “To be in a room and have the give and take of playing together is really powerful and joyful.”

“I haven’t really been singing around anyone since, like, March,” Cynthia chimed in, her vintage dress sparkling under the light. “I probably hammed it up before the microphone.”

For 25-year-old trumpeter Sarah Gans, joining the video was a sort of homecoming. Gans, who grew up in Woodbridge, joined the Kapelye in middle school. She’s now a medical student at the University of Connecticut, where she doesn’t often have time to practice (“it’s also not so popular with the roommates,” she joked).

Music has always been a family affair: her father, mother and sister are also musicians. She said she was excited to return to the group. 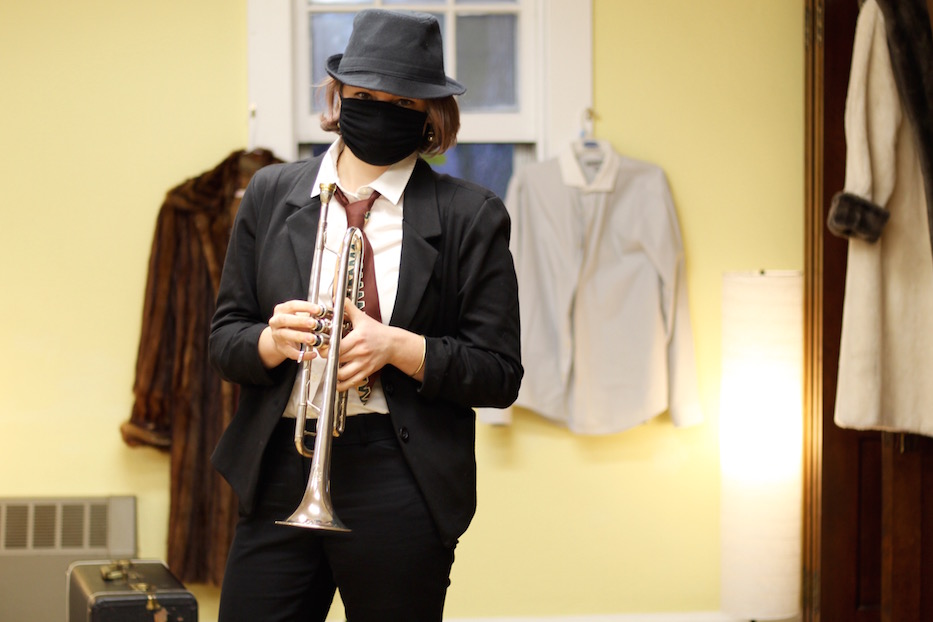 “Playing with the Kapelye feels nostalgic,” she said. “It’s a personal, a Jewish nostalgia. It connects me to my roots. It’s a comfort … coming back, it’s a type of fun and joy that I don’t experience anywhere else.”

In an adjoining room, Miles called Cynthia Astmann back to a vintage mic. She stepped back and removed her mask, preparing to lip sync. Her lips gleamed ruby red. Rodgers cued up the music. Astmann smiled and launched into the song, without ever saying a single one out loud. Her lips moved in perfect time.

The group plans to release one more recording on December 25. Miles said that it’s no substitute for playing in person. But for now, it will have to do.

“It’s kind of extraordinary what we did,” he said. “I'm kind of at a loss for words. It was a beautiful day.”

Find out more about the Nu Haven Kapelye at its website.