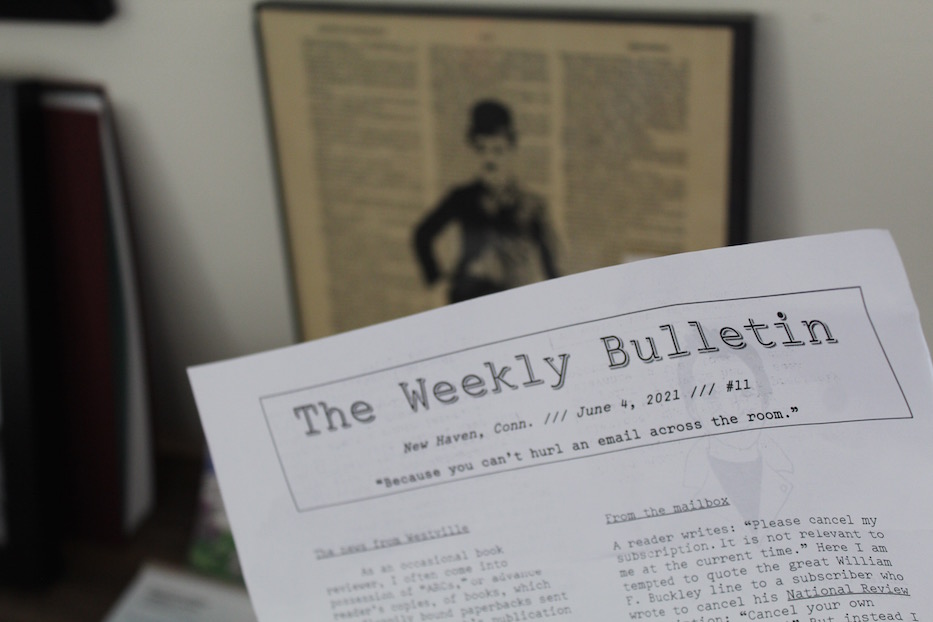 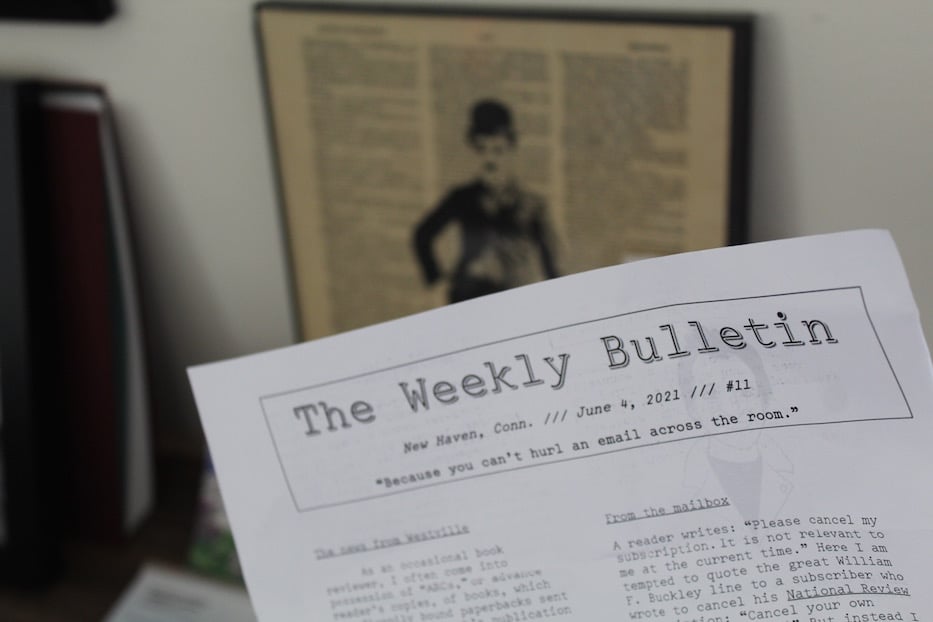 What happens when a nationally recognized author learns about weeding at 46 years old? Or asks readers whether he should let go of a favorite book he’ll never read again? Or mourns the digitization of class notes in his high school alumni magazine?

You get The Weekly Bulletin, a double-sided snail mail newsletter from writer, journalist, and Unorthodox podcast host Mark Oppenheimer. Since March of this year, Oppenheimer has been writing and sending the newsletter from his home in Westville. He currently has over 300 subscribers around the globe. Readers come from at least 25 states—as close as Westville and as far as Alaska—as well as Australia, Mexico, and Canada among other places.

It's a gentle push against the mounting deluge of digital information, from social media to Substack newsletters that have gained huge popularity in the last few years.

"Seeing people I admire starting newsletters was inspirational, but no part of me wanted to send or receive more email,” Oppenheimer said in a recent interview at the Range at Lotta Studio. “What I really like getting is actual mail. In the mail. I think it’s just a general affection for tactile things, for things that we can hold."

Oppenheimer loves Elm City Sounds, the record store that arrived in Westville three years ago this summer. He pages through the glossy catalogues that arrive in his mailbox instead of chucking them directly into the recycling. A few years ago, he ditched Facebook and Twitter and never looked back. He speaks of David Sax’s 2016 book The Revenge of Analog with great reverence, as if it is a holy text.

The newsletter, printed in a digitized version of a typeface used on IBM Selectric typewriters, literally folds right into that world. There’s a sense of whimsy and humor there, paired with the intimacy of a physical document. While Oppenheimer begins each week reliably with the news from Westville—“really the news from my dining room,” he said—it’s varied and conversational.

He debates getting rid of books that he knows he won’t read again. He gets “squeeshy” about placing an advance reader’s copy of his friend’s sex advice manual out on the curb, as he does with most ARCs he receives. He interviews his brother Daniel about not only his recent book Far From Respectable: David Hickey and His Art, but also about their childhood, careers and his brother’s hang-up with Huckberry, a clothing store and magazine that appears to be Eddie Bauer for younger and more attractive, aggressively fit people. 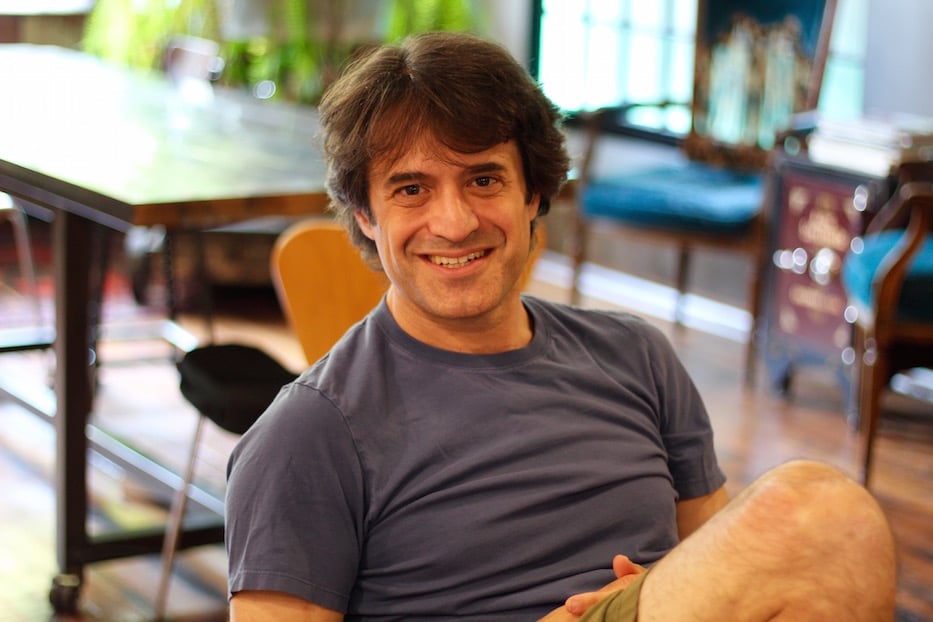 Oppenheimer at The Range, a coworking space at Lotta Studio. "The community of people who are interested in getting this newsletter is inherently interesting to me," he said. "Like, you have to be a  certain kind of person to want this extra piece of extra, physical mail."

Parts of it are laugh-out-loud funny, including an initial exchange that establishes how the brothers Oppenheimer know each other. In other issues, he gives occasional, cheeky updates on shopping, catches readers up with what he's reading and watching, and welcomes new readers, at least one of whom bears the same name several continents away.

It taps into an essential human-ness that readers may be hard-pressed to find online. This is not Mark Oppenheimer, the hard-hitting journalist who just finished a book on Pittsburgh’s Squirrel Hill synagogue shooting, boldly philosophizing on the meaning of life. It’s him finding beauty in the things that are relevant only in their relative irrelevance. His empathy and interest in human connection, perhaps, is the through line.

"I think that so much of the information we get is highly standardized or highly politicized,” he said. “And I think those are both really oppressive modes. And what I want to give people is something that's personal and idiosyncratic."

It has fostered a sort of familiarity across miles, state borders, and sometimes whole oceans that separate Oppenheimer from his readers. A reader named Rosie sent a newsletter that she worked on in elementary school, circa 1995 (Oppenheimer also worked on a grade school newspaper, of which he was the sole editor, reporter, and publisher).

Another offered a meditation on death titled “Bury Me With The Banjo,” in praise of the euphemistic language people use to describe leaving one’s earthly body. Kathrin Day Lassila, editor of the Yale Alumni Magazine, recalled working on her three-dimensional tic-tac-toe strategy as a kid until she won against her dad. This year, she’s thinking about giving him a set so the two can play again.

In Potosi, Missouri—a “neat little historical place” with a population of 2600—Stephen Johnson signed up for his weekly copy after hearing about it on Unorthodox earlier this year. Johnson grew up in Potosi and never left; he started listening to Oppenheimer after the author appeared on a Catholic podcast that he likes. This year, he quit his job in finance and became a full-time dad to his goldendoodle, Banjo, while looking for his next professional step.

He said the bulletin connects him with a world outside of the small, majority-white and politically conservative town he calls home. While he also reads Potosi’s weekly local newspaper, he delights in Oppenheimer’s universe, from the personalized view of New Haven to reader comments on the names of local hair salons. He likes that he has to wait for it to arrive each week; the rest of his news comes from social media and online outlets.

“It's awesome!” he said in a phone call. “You never know what is going to be ... I love the anticipation. We as a society love instant gratification, so going down, looking into my mailbox—it’s nice.”

Outside of Pittsburgh, 31-year-old Ashlee Fleming subscribed after reading about the bulletin in an email from Tablet magazine, of which Oppenheimer is the editor at large. During the day, she works as a technician for an electric utility company, where most of her work has gone remote for the last 16 months. Normally, she said, she tries to reduce the amount of paper mail at home. But the newsletter felt different.

She tries to catch at least one episode of Unorthodox every month, alongside news that she gets from NPR, the BBC, and PBS, and was interested in having more of Oppenheimer’s voice in her life. A few years ago, she said she and her husband realized that “we needed to stop talking about politics after six.” A newsletter focused on books and neighborhood musings with animated and witty reader feedback was a novelty. It still is.

After weeks of reading it, she said it feels like getting updates from an old friend.

“The only other real piece of mail is my mortgage every month, so this is nice,” she said. “It's just a snapshot into someone's life.”

Matthew Plooster, an Unorthodox fan who is the stewardship officer at the University of Utah, said he likes the old school feel of the newsletter. Like Oppenheimer, he is a self-described bibliophile and typography nerd. He said he sees how platforms like Facebook and Twitter don’t work in service to facts or complete stories, particularly after “the intellectual hell that was 2020.”

He pointed to the statement from Andrew Keller, then a global creative director at Facebook, that “the average person, on their phone, scrolls the height of the Statue of Liberty every day.” That’s 300 feet of content. He prefers the double-sided newsletter.

When the newsletter arrives at his home three Fridays per month, it doubles as his transition from the stress of work into the weekend. Working in public education can become inherently political, particularly after the last presidential administration. The newsletter is a reprieve. He said he reads it before taking his coat off, making dinner, or thinking about doing laundry.

Learn more about and subscribe to The Weekly Bulletin here.