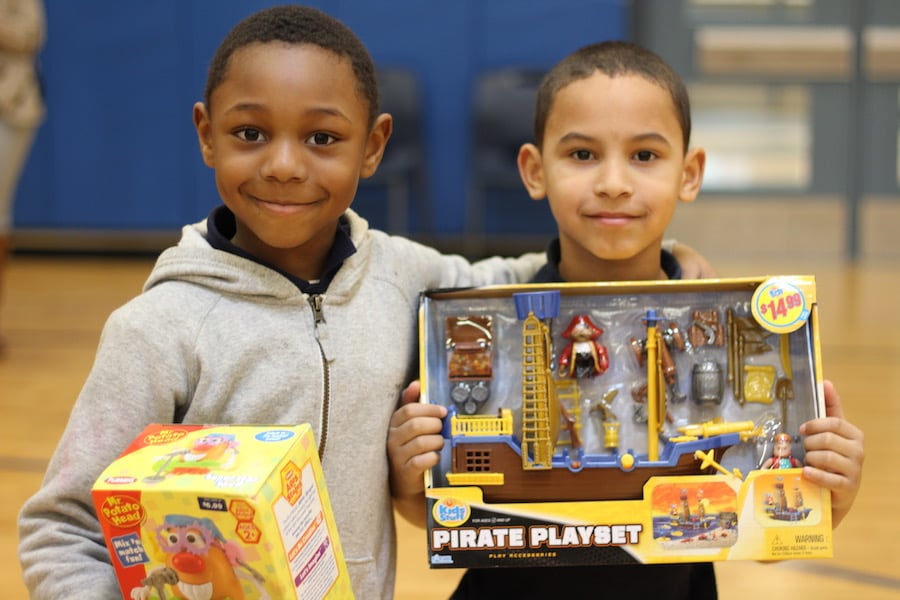 Cristyion Portee has started taking things apart and putting them back together as part of his dream to one day be a veterinarian. So when he received an unexpected Mr. Potato Head three weeks after he thought the holidays had ended, he used it as a chance to learn about longstanding Latinx tradition.

Thursday morning, Portree was one of over 100 students to attend a Three Kings Day (El Día de los Reyes) celebration at Clinton Avenue School in Fair Haven. The event, now in its 17th year, is sponsored by the Hispanic Firefighters Association of New Haven in collaboration with Puerto Ricans United (PRU).

Like PRU’s annual event at Casa Otoñal, which was held last Friday, the event includes a gift giveaway for every attendee as well as a brief lesson on Three King’s Day and Latinx culture. Both Mayor Toni Harp and State Rep. Juan Candelaria were in attendance as special “surprise guests,” to teach students about the day’s significance in New Haven and around the globe, where it is widely celebrated across the U.S., Latin America, and Spain.

Three Kings Day, also referred to as the Feast of the Epiphany, celebrates the the three wise men’s visit baby Jesus in Bethlehem, an arduous trek that entailed following one twinkling star to the site of the virgin birth. This year, the celebration’s actual date was Jan. 6, but community centers have stretched the holiday out, and nearby bakeries in Fair Haven and The Hill have been turning out Roscón de reyes since before the first of the year.

Hispanic Firefighters Association President Captain Rafael “Ralph” Zayas said that he sees it as a way to give back to the community, while spreading word about Hispanic culture in New Haven. As he and fellow firefighters unloaded armfuls of Barbie dolls, toy trucks, board games and building sets encased in plastic, the city’s own Balthasar, Melchior, and Gaspar came to life, laughing and joking with the kids. This year, the roles were played by State Rep. Al Paolillo, Bethel AME Rev. Steven A. Cousin, and firefighter Ian Cordero.

“One of the things we like to do is pick a school, and share our culture with these students,” Zayas said. “New Haven is a melting pot, and there’s different cultures but a lot of us here have a lot of things in common. And we bring out presents for the students and bless em’—kids love presents.” 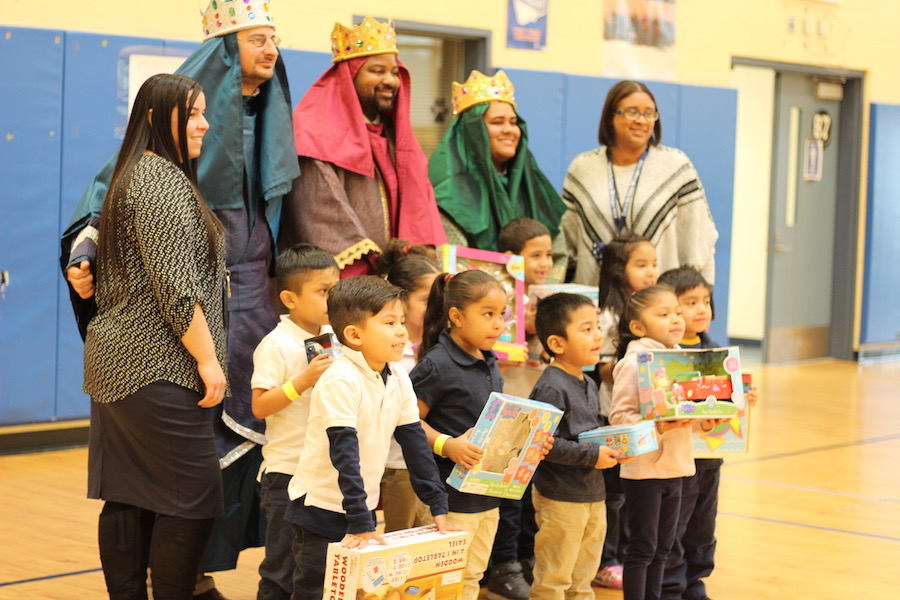 “In today’s time, where the climate is so tense, I think that it’s good that we start young teaching the kids about different cultures,” he added. “Because the sooner they learn, the better it’s gonna be. They’re gonna be able to get along with everyone as they get older.”

Nearby, one student leaned into Cordero’s ear, and confided that because their gift came with two parts, it felt like two presents. That wasn’t a problem, Cordero assured him, chuckling to himself as a long line of students kept moving forward.

In the middle of the gym, kindergartner Jaycean Ayala was inspecting his gift, a bright puzzle of a school bus with cheery students inside and a rainbow arcing overhead. He said that he has heard of Three King’s Day at home, but was excited to see the magi turn up at his own school.

“I think I can be one,” he said of the kings. “I liked when they’re giving out gifts.”

He scurried back to his seat on the floor before a short lesson from Candelaria and Harp, who told students they would be the city’s future teachers, doctors, firefighters, and leaders if they continued to stay in school.

“When you go home, tell your parents the story you have learned about the Three Kings,” said Candelaria, who represents New Haven in the state legislature. “Today’s a very important day, cause it’s part of our culture and who we are. That’s why we celebrate Three Kings. It’s not so much about the toys. So when you go back home today, just tell your mommy and daddy that you love them, and be good students. That’s the most important part of all of this.”

After the event, first grader Portee said he and his friend Jayob Rodriguez-Hernandez said they both planned to do that. Portee had never heard of Three Kings Day, and now wants to know where he can get a cool blue shimmering robe and crown.

As he spoke, he cradled a new Mr. Potato Head with detachable ears, eyes, mustache, glasses and big , shiny shoes. A pint-sized animal enthusiast, he said that he would like to be a veterinarian when he gets older, and may use the toy as his very first practice instrument.