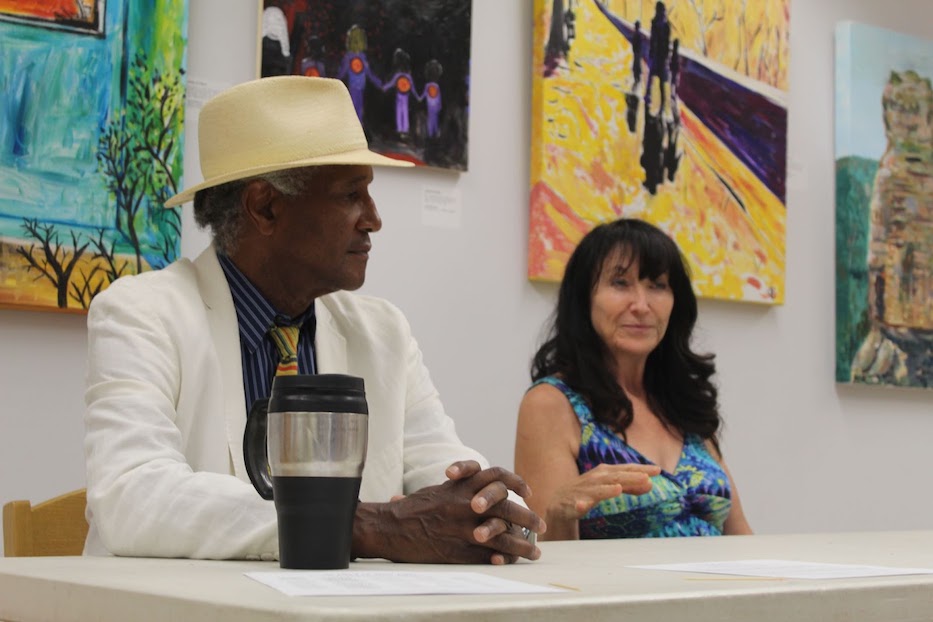 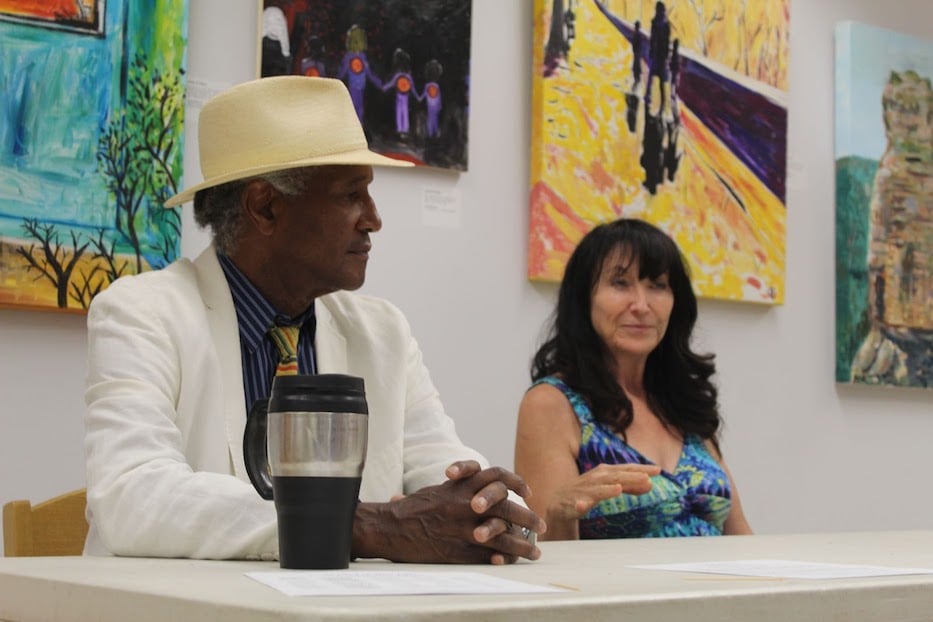 A Black man reclines on his lawn chair, soaking in the warm vibes on the beach. Wearing a white bucket hat and some shades, he’s equipped to handle the sun toasting the sand around him.  He’s on a mission—and nothing will distract him from the next chapters of his novel.

Artist Larry Morse tells that story in his series Black Men Reading, now on view alongside the work of Jane Gilman Fleischner at the Mitchell Branch Library in Westville. Last Saturday, the two appeared together to speak on their joint show, titled “In Need of More Light.” Over 20 people attended, cramming into the gallery space to listen to the artists.

The show runs through August 30. At an opening reception, artists left time for people to look closely at the art before a 30-minute question-and-answer session. 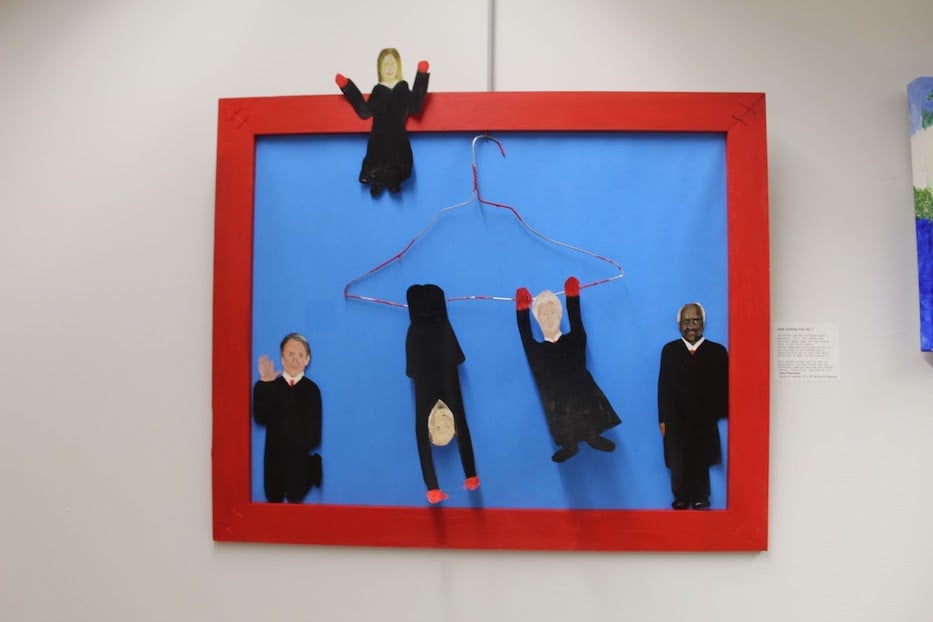 And Justice For All? by Jane Fleischner. Abiba Biao Photos.

The show at Mitchell marks a first for both of them after years making work in the arts world. Based between Trumbull and the N.E.S.T. Art Center in Bridgeport, Fleischner said that she uses all kinds of media to express her emotions on a particular subject—but most commonly turns to acrylic paint or pen and ink. Beyond her interest in current events, Fleischer creates pieces about a variety of topics such as grief, meditation, and nature.

Saturday, she spoke about how she has recently used her art to highlight social and current issues, including after the recent overturning of Roe V Wade. In the work, titled And Justice For All?, U.S. Supreme Court Justices Samuel Alito, Clarence Thomas, Neil Gorsuch, Brett Kavanaugh, and Amy Coney Barrett look out at the viewer, their palms bloody to show the pregnant people they will endanger with this decision. Gorsuch and Alito hang precariously off a bloody coat hanger, representing the dangers of self-induced abortions.

Fleischner said the idea of a blue background came from a shopping trip at Micheals one day. She was looking for something to accentuate the bright red  of her canvas frame, and the color combination worked. 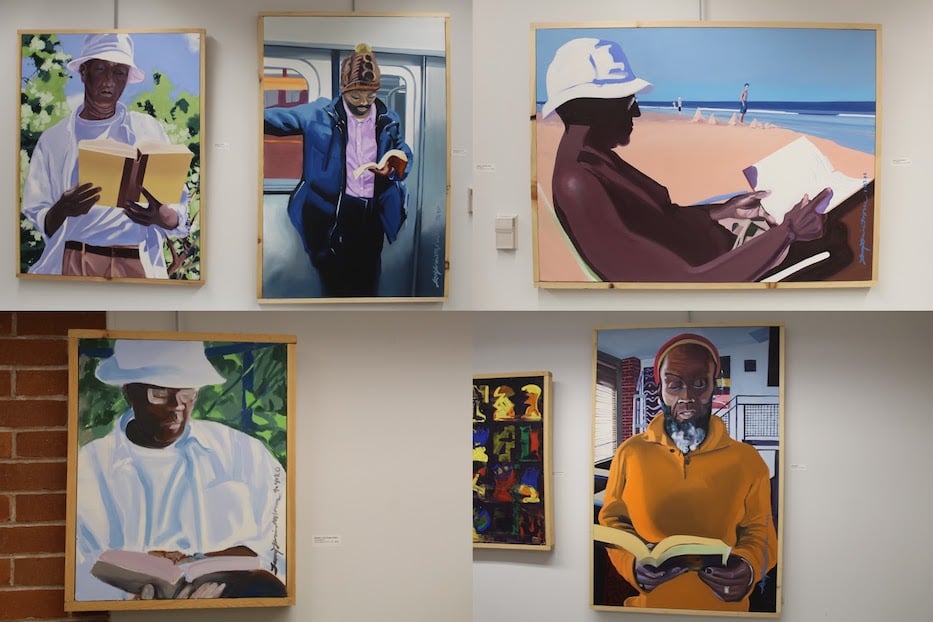 Morse, meanwhile, showed paintings from his series Black Men Reading, which showcases Black men reading in a variety of locations. The series, which includes a total of 32 oil paintings, took two years for him to create. Saturday, he said it's part of his desire to tackle the low literacy rates brought on by centuries of racial injustice and the enslavement of Black people. He also drew inspiration from the Black Lives Matter Movement.

He explained that he is driven to spread the importance of reading to Black men and others in his community, and that painting is the way for him to communicate that message.  “I just have this kind of knee jerk reaction or reflex to say something to my brothers,” he said—and that message is reading.

“Through the reading is insights, through insights, that's a different perspective, our perception of our work, environment and ourselves and how we fit in,” he added.

Morse is an avid reader himself, he added. Some of his favorite authors include Octavia Butler, James Baldin and Richard Wright—all champions of civil rights and Black voices, and all writers who believed that another world was possible. He has a long ongoing list of favorite novels and enjoys his life as a bookworm. 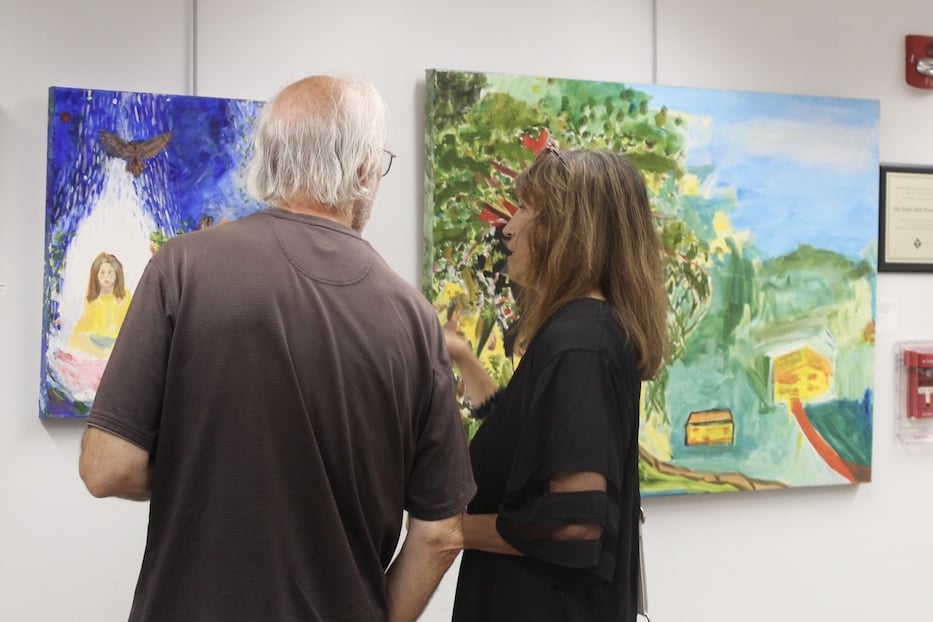 Barbara Ringer, a friend of Fleischner's, came all the way from Ridgefield to support her show and brought her husband along with her. She praised the painting  Seeds of Paradise, in which a mother is holding her son's hand while trying to shield him from the world.

“The first time I saw that I just felt like the mother and child really spoke to me and I just love it every time I see it,” Ringer said.

Fleischner's daughter, Leah Fleischner, was also in attendance, supporting her mom by recording interactions and taking pictures. Fleischner not only showed her passion about the environment through her paintings but through her real world bringing up her daughter with environmental beliefs.

“I've also kind of grown up with my mom being very inspiring and working to help our planet and be sustainable,” Leah said. 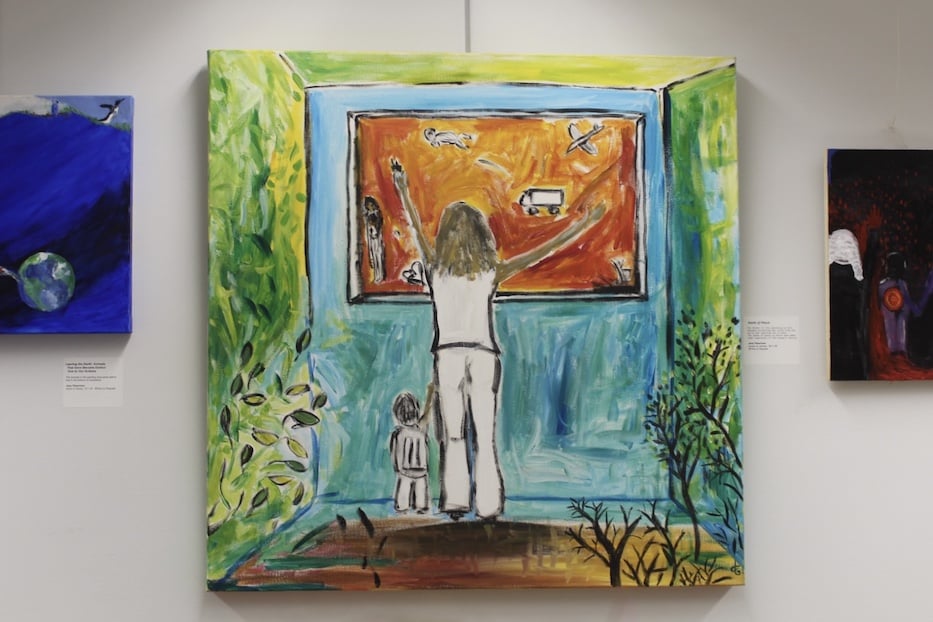 For Fleischner, no idea is off limits. One of her works is a painting based off of a dream Leah had about being abducted by aliens.

“I was in my bedroom and like, got stolen by aliens in the night, really weird, but she painted like she thought it was such a creative story and she kind of painted like me sitting like by my window looking out at the sky.” she said

During the question and answer section, attendee Ann Marie Pastor admitted that she was grappling with some of Morse’s work. While she understood the message behind Black Men Reading, she said, she also had some skepticism.

She said she didn’t understand where Morse was coming from, because she's had friends from a variety of racial backgrounds and orientations who have succeeded academically. She recounted her friend Ricky, a gay Black man who was an avid reader and went to college.

It wasn’t until she reflected on her own experience that she realized the parallels that Morse was talking about, and the examples of systemic racism in her own life. For 26 years, Pastor lived in Bridgeport. During her time in high school, she lived next to what she described as a low income neighborhood. 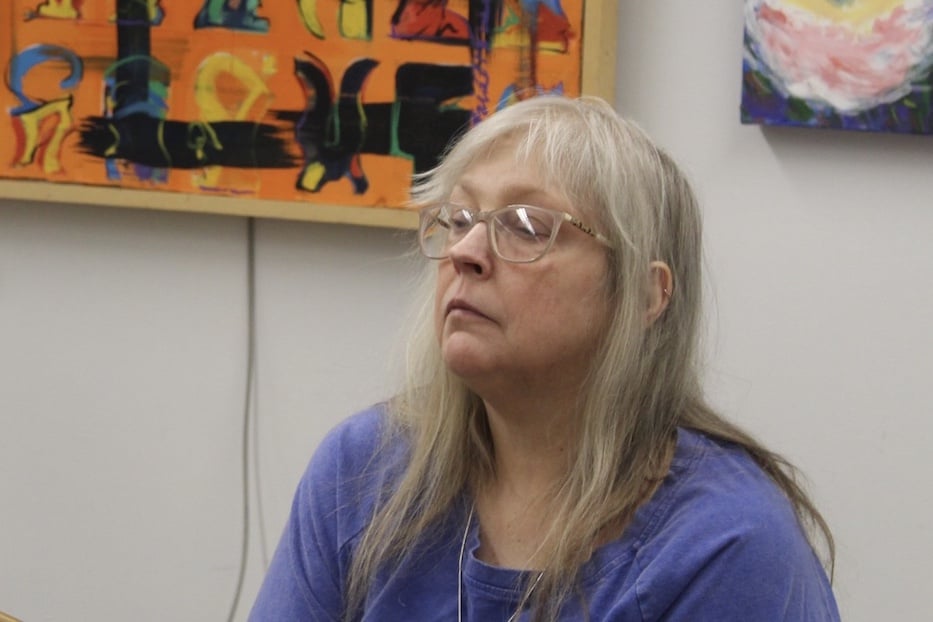 “I lived three blocks from what they called the projects,” Pastor said. Her father was a police officer, and she heard about the issues dealt with in those neighborhoods.  She began to see the connections between issues she had previously overlooked, such as how that unfavorable atmosphere may impede academic and personal development.

She recalled using worn textbooks in class, which underfunded school districts often use to save on expenses. Due to redlining, school districts in low-income communities have more financial and resource constraints compared to schools in more affluent regions.

She acknowledged that the practice has had a tremendous impact on local counties, towns, and neighborhoods, influencing their current state today. Under-funded schools often serve a predominantly Black and Latino student body, and these systemic barriers have an impact on their education.

The event concluded with Morse reciting "The Star Splitter" by Robert Frost. After the recitation, people exchanged hugs, chatted and took their last glances at the artwork. Fleischner hopes her work has inspired others to express themselves via art.

“If you think it in your head, say something, do something, share it,” she said. “Don't keep it inside, whatever it is let it out."

This piece comes to the Arts Paper through the summer extension of the fifth annual Youth Arts Journalism Initiative (YAJI), a program of the Arts Council of Greater New Haven. Read more about the program here or by checking out the "YAJI" tag. Abiba Biao is a newly-minted graduate of Achievement First Amistad High School and will begin her freshman year at Southern Connecticut State University in the fall.