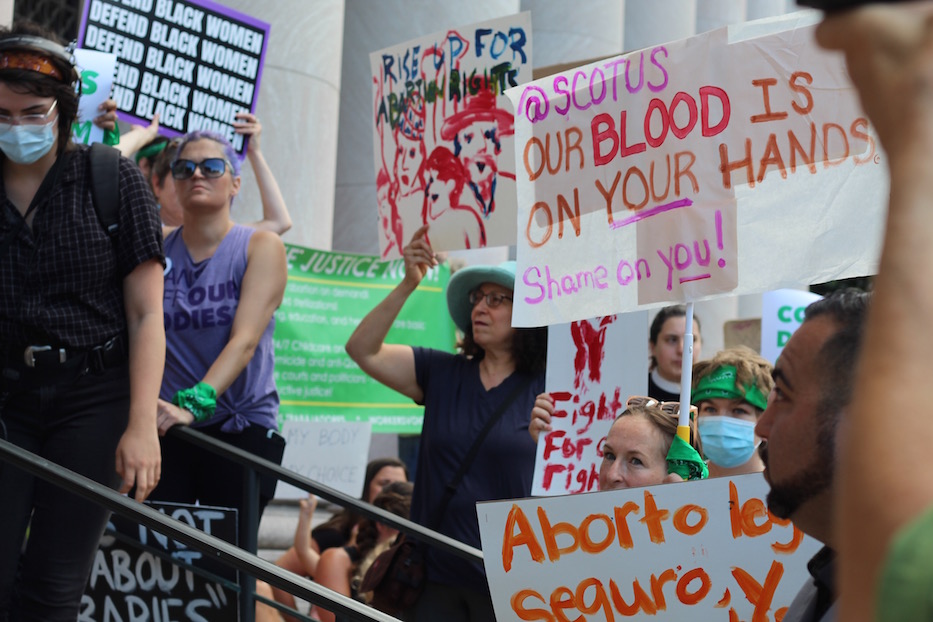 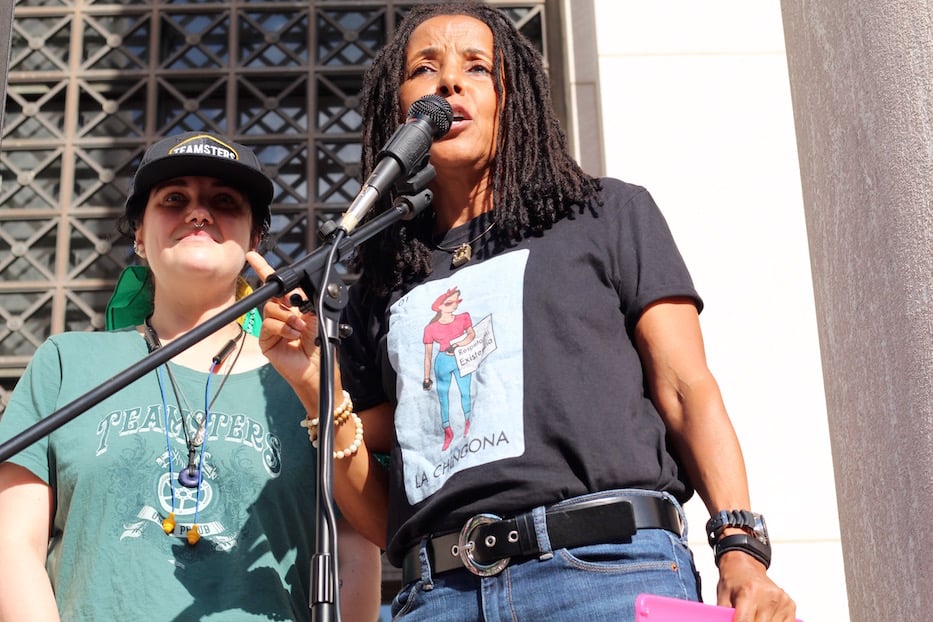 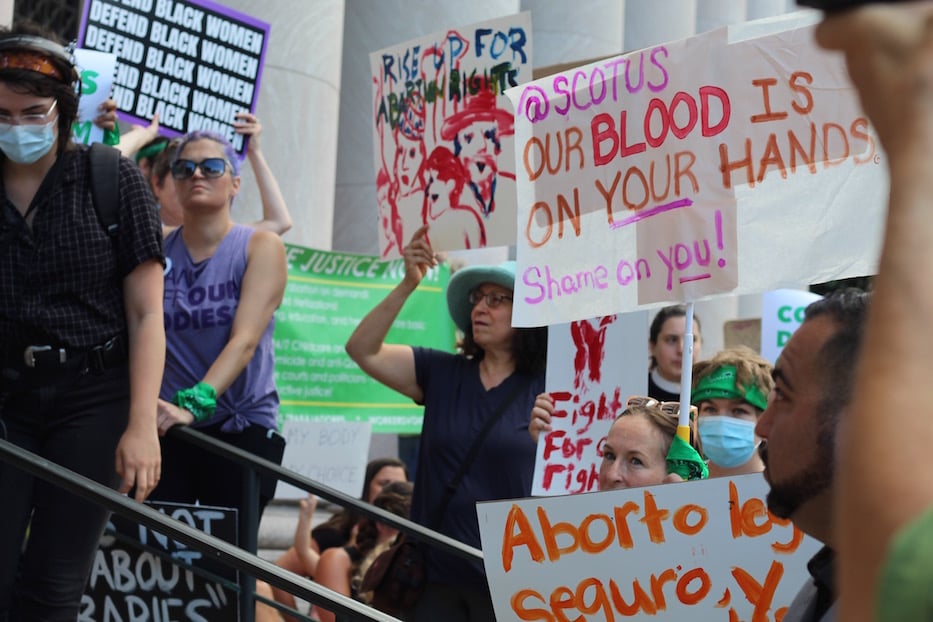 Top: An organizer who identified herself only as Rachel and Kica Matos. Bottom: just some of the signs. Lucy Gellman Photos.

The words floated over Church Street, weaving through the crowd and winding up the steps of the federal courthouse. We will not/we will not/we will not/be controlled. They wrapped a 215 bus in song as it slowly trundled past. Signs that read “Mi cuerpo, mi decisión” and “Abortion is healthcare” rose high into the air. I am sovereign in my body/I am sovereign in my soul. Within seconds, hundreds of voices were carrying the words.

Hundreds of New Haveners gathered Friday afternoon at the city’s federal courthouse to rally, speak, grieve, sing, and march after the Supreme Court of the United States struck down Roe v. Wade and Planned Parenthood v. Casey Friday morning. The six-three ruling will strip millions of people of their choice to terminate a pregnancy. During the hours-long action, song, prayer, poetry and music often set the tone, urging attendees to find solace in the communities of care that they have built.

“We will not go back!” the crowd bellowed in return, sending up waves of green down the block. The color, first used in Argentina’s fight for abortion, has more recently become synonymous with the fight for reproductive choice in the U.S. Friday, green bandanas appeared wrapped around necks and foreheads, tied on wrists, and slipped through dogs’ collars.

The decision most immediately affects residents of 13 states where abortion is now or will soon be illegal. The Guttmacher Institute reports that 26 states are likely to ban abortion in the immediate and near future with Roe overturned. Reasons for abortion are not limited to unwanted or unexpected pregnancies: they include unforeseen pregnancy complications, intrauterine fetal demise, and miscarriages and ectopic pregnancies that require medical or surgical intervention. In the case of the last two, a pregnant person is likely to die without intervention.

It is also the product of a decades-long attempt from the political right, including Supreme Court Justice Samuel Alito, to end Roe on grounds that are ostensibly both moral and constitutional. Friday, Justices Alito, Clarence Thomas, Neil Gorsuch, Brett Kavanaugh, and Amy Coney Barrett voted to overturn the 1973 precedent. The last three, as well as Alito, were appointed by presidents who lost the popular vote.

Justices Stephen Breyer, Sonia Sotomayor and Elena Kagan voted to uphold Roe. In a fiery and fierce dissent, Sotomayor pointed to what she saw as the complete moral bankruptcy of her colleagues on the bench. 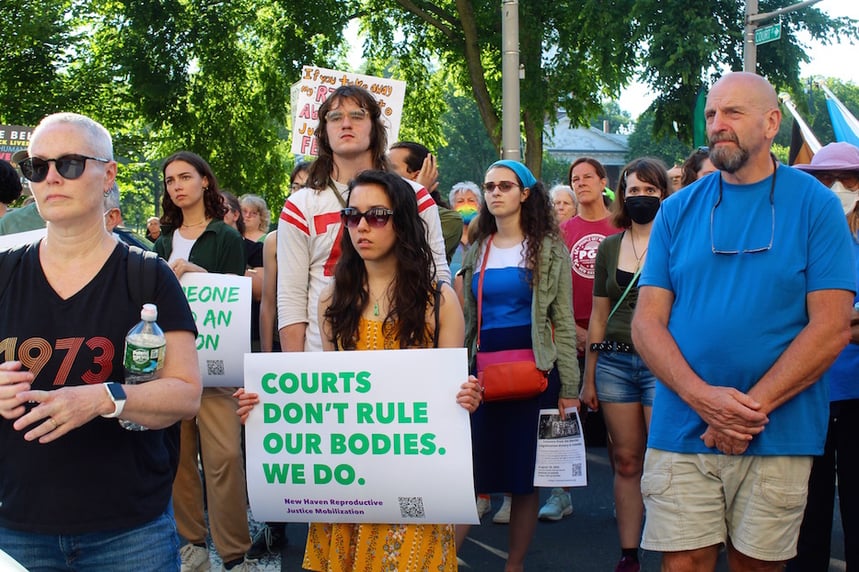 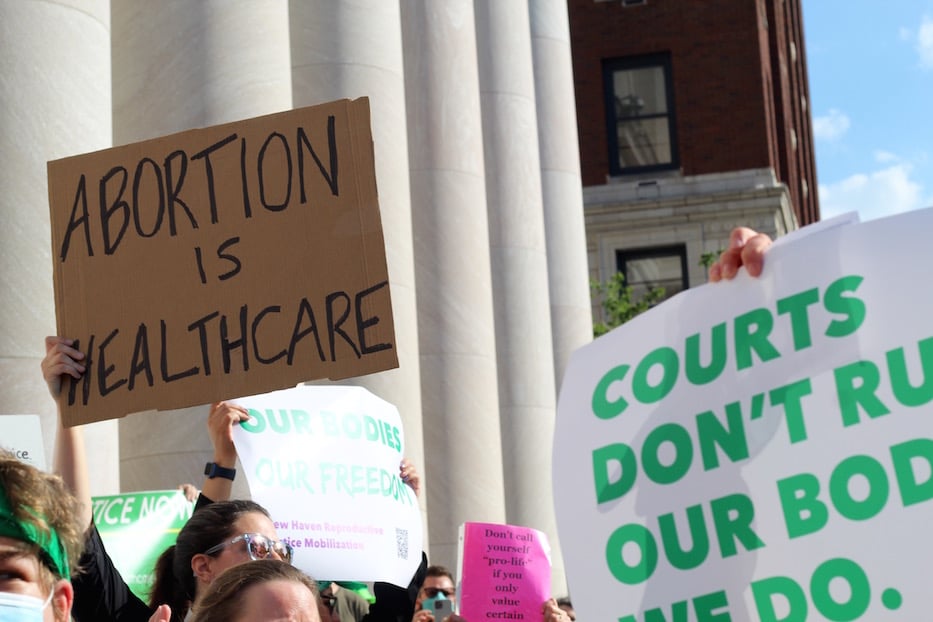 As attendees multiplied Friday outside the courthouse, it was those who are mothers, could at any time become mothers, and have made the choice not to be mothers who spoke most directly to the heart of the ruling—and the potential for action in the coming days, weeks, months, and years.

As each spoke, they looked over signs that read “You cannot ban abortion, only safe abortion," "Get Your Laws off my body," "Ruth Is Mad as fuck" ("She's not the only one!” Matos said when she saw the sign. “I’m mad as fuck!”), "We don't stop being people when we get pregnant," "If I wanted the government in my womb, I would have fucked a senator" and "Gorsuch can't even find the clit."

Many of them are members of the New Haven Reproductive Justice Mobilization, a network of pro-choice advocates that formed in the wake of a leaked SCOTUS decision in May of this year. They include a growing coalition of people and organizations, including ​​CT Shoreline Indivisible, Jewish Voice for Peace, the League of Women Voters CT, Mending Minyan, First & Summerfield United Methodist Church, the Nonprofit Accountability Group, Congregation Mishkan Israel, and Planned Parenthood among many others.

“Today's ruling is as outrageous as it is unacceptable,” Matos said. “The court has stripped away the freedom and agency of millions, especially Black, Brown, and Indigenous women, girls, LGBT and gender nonconforming people." 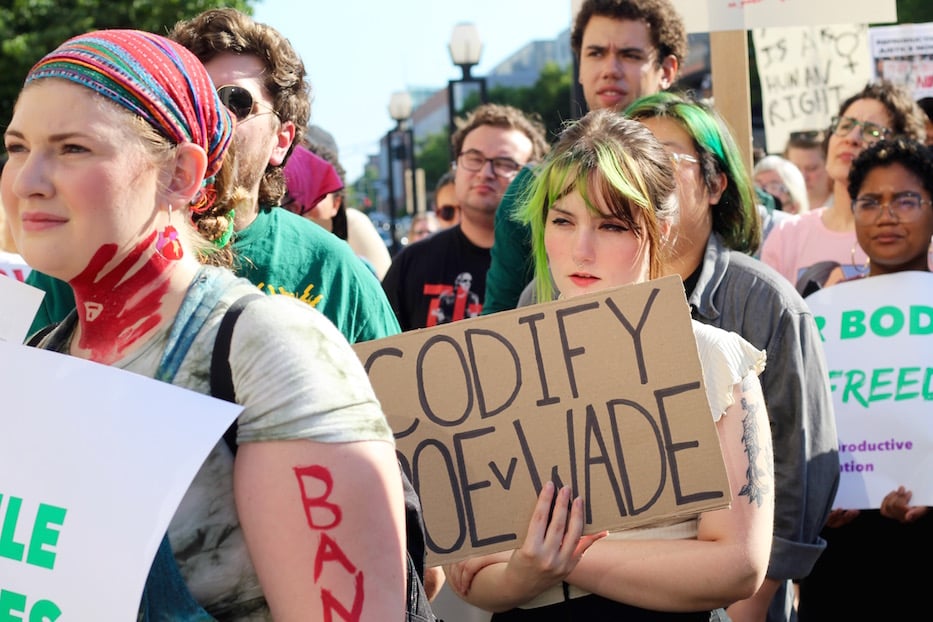 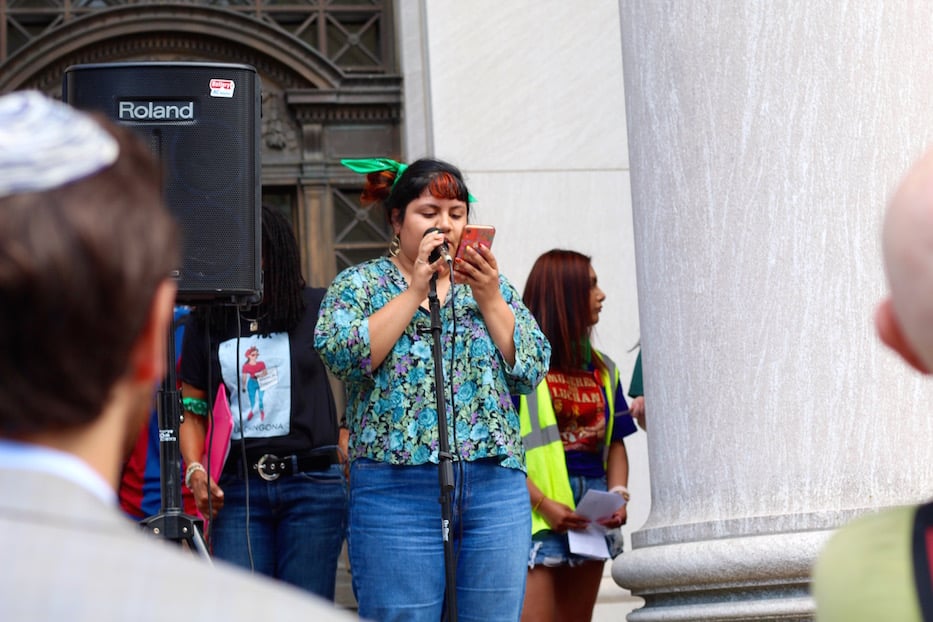 Bottom: Lupita Galvan Tinoco, one of the organizers of the rally. Nayeli Garcia is pictured in the yellow vest beside her.

Throughout, speakers centered that tension—that the most vulnerable people will be the most immediately and profoundly affected—as they climbed the steps of the courthouse and took the mic one by one. A member of Unidad Latina en Acción (ULA), organizer Nayeli Garcia told attendees that she was afraid to live in a country “where a woman’s body is more controlled than a gun.”

Eleven years ago, Garcia and her family came to the United States from Mexico. She was just 13 years old, and had never been part of organizing efforts. Since then, she has gone through and graduated from New Haven Public Schools, attended Gateway Community College and testified on behalf of domestic workers in New Haven and across the state. Friday’s decision made her question the supposed promise of freedom in the U.S. yet again, she said.

She looked to work that organizers, particularly women and LGBTQ advocates, have done to fight for abortion access in Chile, Argentina and Mexico.

"We are regressing 50 years back,” she said. “This is not simply a failure of the U.S. Supreme Court. This is a violation of our rights. Thanks to Robert Alito, Thomas, Gorsuch, Kavanaugh and Coney [Barrett], millions of women will die. Many young women will have to give up their dreams, goals, and set their lives aside with no autonomy on their body." 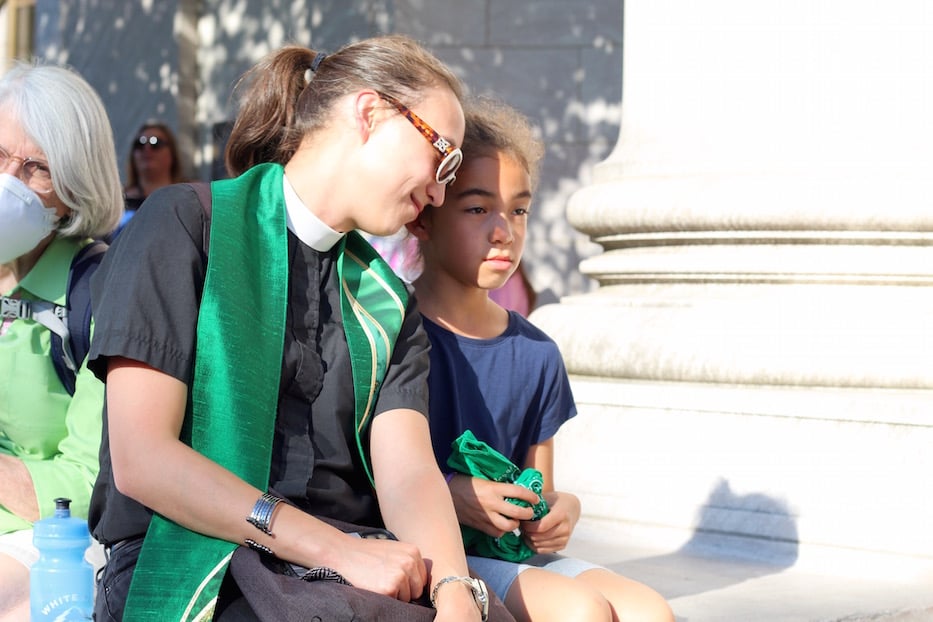 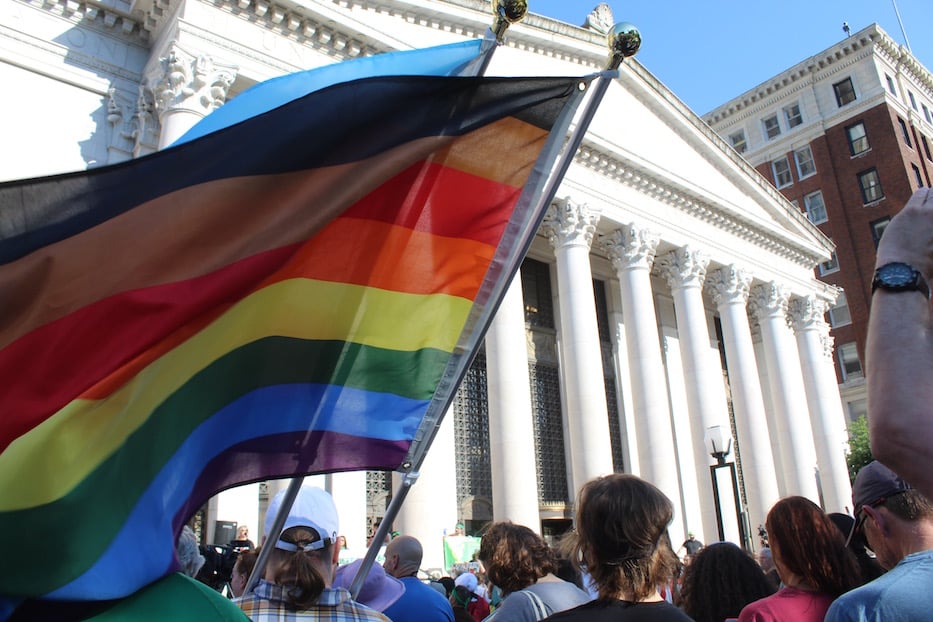 As a green silk stole swung from her shoulders, Rev. Vicki Flippin of First & Summerfield United Methodist Church came up the steps and proclaimed that “The resistance is here!” A cheer went up from the crowd, which had continued to steadily swell until it took up half of the street.

Down the block, a person could see an undulating wave of green, broken up by handmade signs, a few handmaids in red gowns and white bonnets, and LGBTQ+ pride flags. On the street, some friends found each other while others looked to the courthouse, their eyes glued to the lineup of speakers.

Calling herself a “baby of the movement”—meaning that she has never lived in a post-Roe U.S. before—Flippin took the crowd back to her own beginnings as a young Christian. For years, she said, she was told that "to be religious you must oppose abortion." It was only several years of study, fellowship with other Christians, and deep thought that exposed cracks in that foundation.

As Fippin grew into her faith, she said, she met fellow clergy members—Christian, but also from other backgrounds—who believed that a person's right to terminate a pregnancy was theirs alone. She learned about the Clergy Consultation Service, a network of Christian and Jewish faith leaders which in the 1960s and 70s provided resources for safe abortion access before Roe was even on the books. 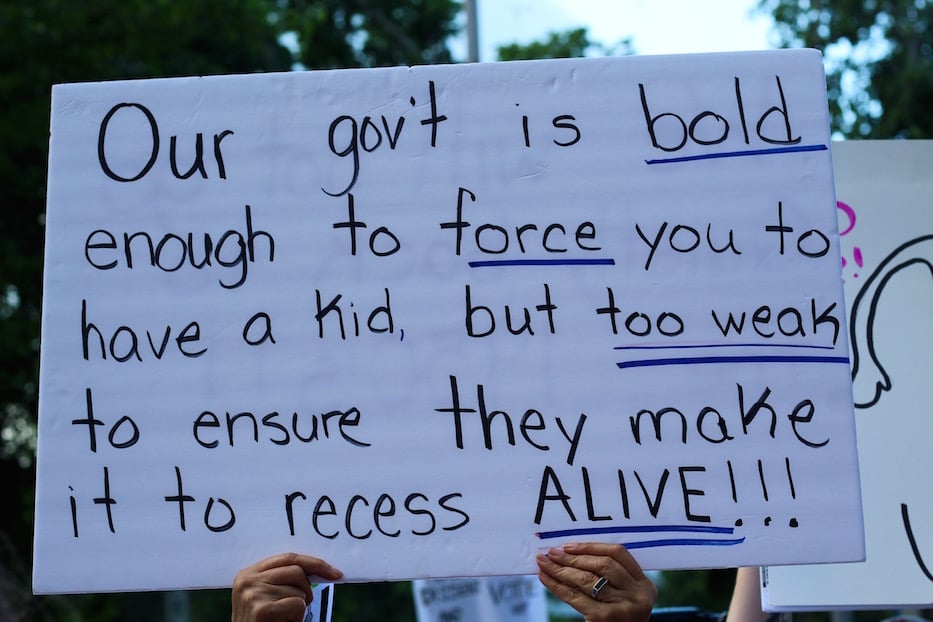 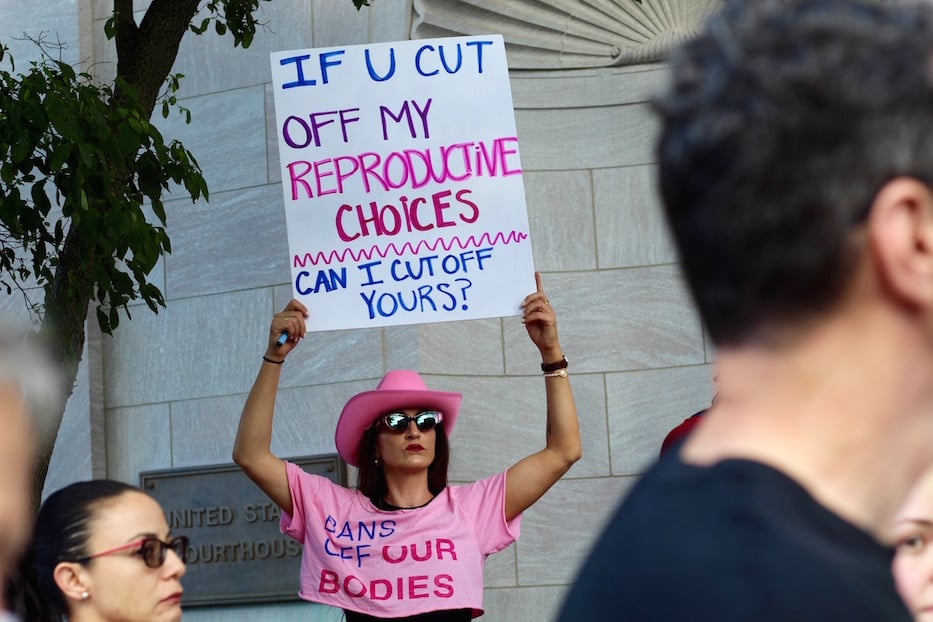 When they began their work in 1967—including a full-page spread in the New York Times—their numbers were less than two dozen, and abortion was still illegal. It meant that any one of them could go to prison for their work. "They risked arrest, they risked their freedoms to publish in this way," Flippin said. By the time the Supreme Court made a ruling on Roe six years later in 1973, the Service had become 1,400 members strong.

"Their faith told them that it was their duty and their role as religious and moral leaders of a community to help reduce the suffering of vulnerable people," Flippin said. Decades later, she upholds the same belief system.

Fippin has kept learning, she added—because so much of reproductive rights history is not widely available or taught in school. When she arrived at First & Summerfield several years ago, Flippin found out that the church played a vital role in getting people contraception—just as it has opened sanctuary and rallied against racism since—before it was legal in the state.

Prior to 1965 (it was ​​Griswold v. Connecticut that year that made contraception legally accessible to Connecticut residents) congregants at First & Summerfield raised funds to send busloads of women from Connecticut to New York City for contraception. 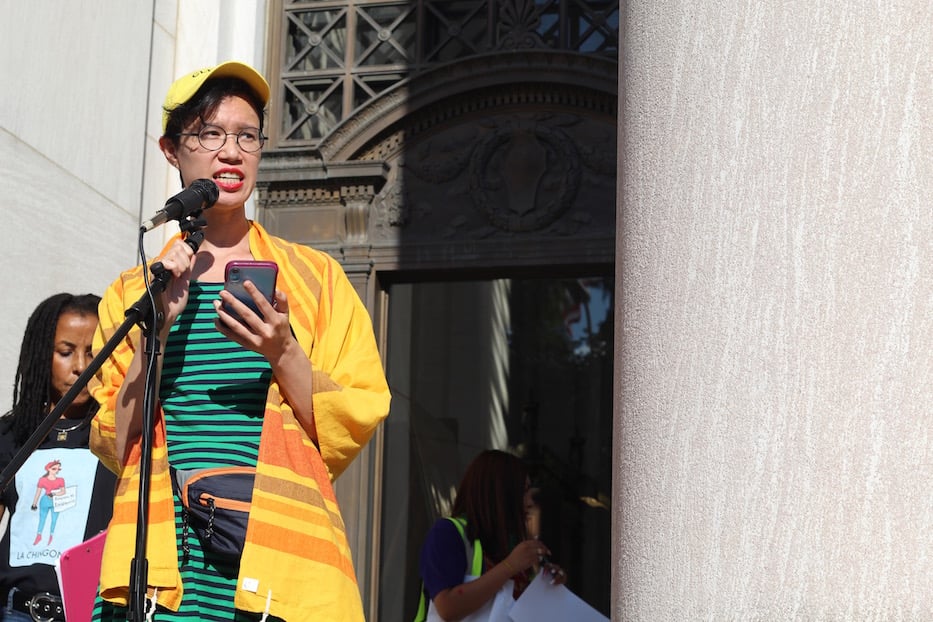 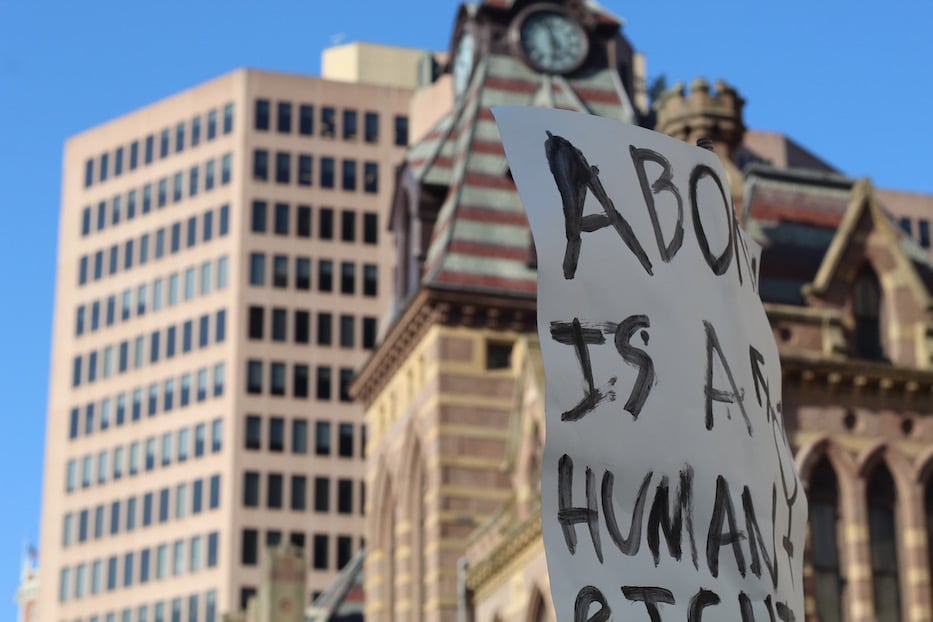 “We gather here because we know that repealing Roe does not mean that abortion ends," May Ye said. "Pregnant people will always need abortion."

May Ye, a rabbi in training with the New Haven-based havurah Mending Minyan, also brought that message to the mic. As she looked over the crowd, Ye acknowledged the collective grief and fear attendees were likely feeling, and urged them to breathe with her. A gold and yellow prayer shawl, hung over her shoulders, a reminder that Shabbat was just hours away. From across the street, faint strains of music floated over from the International Festival of Arts & Ideas. No one let it distract them.

Ye, like Matos and Garcia before her, noted that full and partial abortion bans will do the most harm to those already pushed to the margins—people of color, trans and nonbinary people, disabled people, and women who stand at any of those intersections. Unlike speakers before her, she also brought a gift: a sort of meditation that the group The Bengsons had released earlier in the day.

The act of collective singing unlocked something in the crowd: friends at turns hugged, held hands, cried, shouted, waved their flags and sang like their lives depended on it.

“Friends, we will and we must take care of each other,” Ye said. “We will not abandon people who are in need of abortions. We have been shown yet again today that the systems in place and the people in power do not protect us. They have not kept us safe, and they will not keep us safe.” 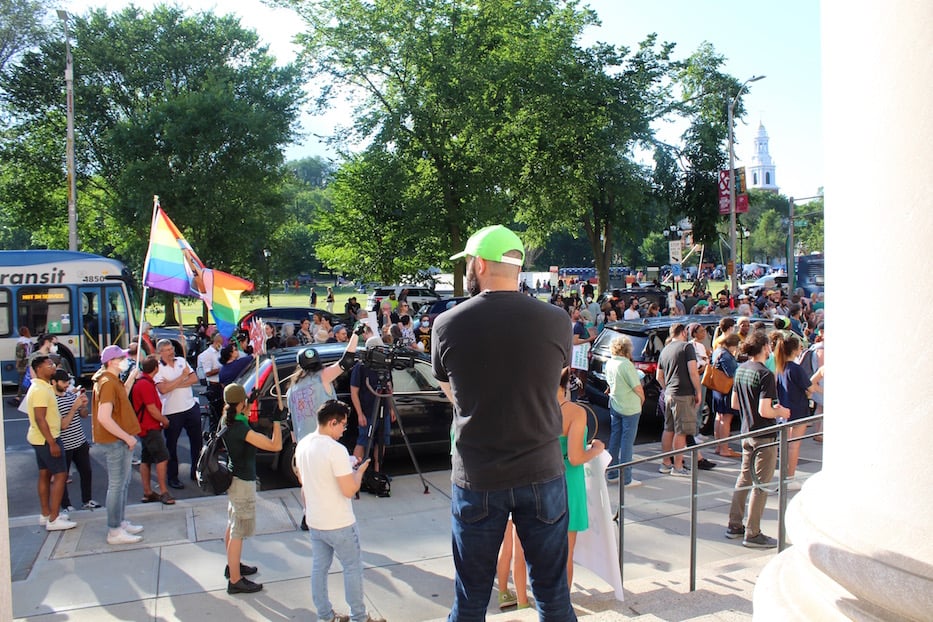 Tenaya Taylor, who leads the Nonprofit Accountability Group, went from Ye’s song and speech into a rallying cry, tying together freedom of choice with wider access to healthcare, housing as a human right, an end to police brutality, and a more viable path to immigration. For Taylor, it is impossible to talk about one without the other, she said—because they all affect how resources are distributed and people receive care in the U.S.

She told the crowd that she thinks about choice constantly, because she is a child that was not terminated, but could have been. She had a difficult childhood, she said.  Years later, after “a lot of healthcare for me, and a lot of healing,” she knows that she does not want to be a parent. She believes, however, that everyone should and must be able to make that choice for themselves.

“You gotta give people that choice,” she said. “So now I'm mad as hell. You should be mad as hell.”