Ubuntu Lives Up To Its Name 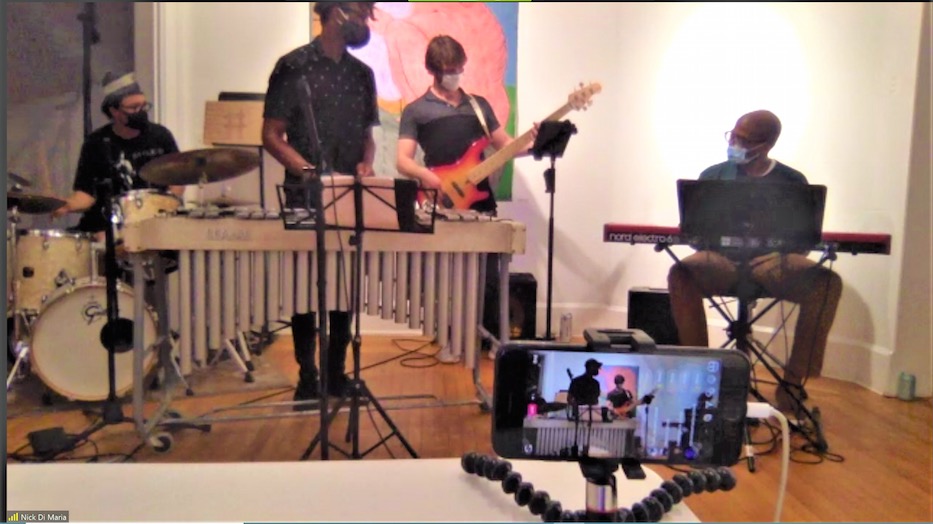 There was a hush—muted mics, silent gestures. Four men stood under the glare of incandescent light. Quiet.

The dim room brightened. The man closest to the camera smirked. His bandmates mirrored him. Viewers were hit with a wall of jazzy-Black sound—Euphoria!

The organization’s new installment finds its stage at the Ely Center for Contemporary Art, which also hosted live jazz at the end of last year. Di Maria will broadcast performances on Instagram, Facebook, and YouTube every Wednesday through the end of the summer. The NHJU funds the series through its Patreon donations.

As Di Maria framed it, Mind The Hang is worth more than its entertainment value—it’s a way to employ local creatives and propel social activism forward. The series has booked paid gigs for many local artists throughout the summer season. Additionally, the NHJU will collect viewer contributions through its PayPal and donate them to selected nonprofits after each livestream. Wednesday’s proceeds went to Black Lives Matter New Haven, which is in the midst of fighting for police accountability in the state legislature and organizing a back-to-school drive for kids in New Haven.

Ubuntu is shared humanity, a definition of personhood defined by human connection. It celebrates our relationships and elevates us equally. It’s a commemoration of raw empathy with our fellow man. Ubuntu! Umuntu Ngumuntu Ngabantu!: I am because you are!

Ubuntu—the group and the concept—wove itself into every fiber of Wednesday’s performance. There were technical glitches and connection lag, erroneous notes and fumbled passages—but also the understanding that error made the debut feel comfortable, organic, and distinctly human.

Drummer Avery Collins kept a steady beat and vibraphonist Alec Rice matching melody to his tempo. Keyboardist Kris Ervin shaped his chords to the line bass guitarist Maxx Spinelli laid down.Ubuntu was the spontaneity of jazz, responding to every gesture and note from bandmates. It was the splatter of an accidental and the shiver of shifting modes.

The quartet put their spin on jazz standard “Bags’ Groove.” The original composer was Milt Jackson, a Black staple of the jazz vibraphonist community—Rice knew it was his time to shine. While Ervin lightly tapped his keys to a countermelody, Rice got to work. He squinted at his sheet music. He swung his mallets high and sharp. The percussion mallets’ heads arced past his shoulders and beads of sweat.

His left foot pumped the vibraphone’s pedal to an invisible beat—the foot sustained long notes tinged with vibrato and tremolo, while deadening sixteenths and eights. Rice sprinkled an accent here and there, flicked his wrist for grace notes, and ran through octave runs with a flourish. As he picked up steam, Rice moved from two mallets to four. He cradled two in each hand and began to pound out chords. He shook to the beat, breathing heavy.

“Ace” was different. Rice’s body became languid, and his movements slow. Ervin and Collins emerged from the background this time. The Walter Smith piece oozed saxophone sensuality. Ervin didn’t tickle the ivories, he stroked them, teased them a bit with the pads of his fingers. He tapped his foot in time and began simply at first. Collins followed his lead, with a steady tap, click, tap from his drumsticks.

They floated along for a bit until a switch flipped. Ervin was first, transitioning from simple chords to syncopated runs. He hit every manner of sharps and flats, hopping in and out of the scale with ease. Collins began to fuss with the beat—closed hi-hat, a hit with snare off, and drag the stick along the suspended symbol’s middle! Ervin played faster. He dragged out a chord, syncopated and slow. Collins hit the rim. It was their own dance. They bobbed their heads in time with each other, smiling.

Spinelli’s entire demeanor took on Walter Smith’s “Moranish.” He wore calm, cool confidence. The song was slow and comfortable for the group to follow—that didn’t make Spinelli’s work any easier. Keyboard, drum, and vibraphone followed a solo that knew its bounds. Basslines were steady—they gave song’s foundational notes and rhythms. Spinelli’s fingers knew just what pitches to hit, dancing between fingerboard and fret.

There was a piano embellishment from Ervin—a silent challenge. Spinelli didn’t waver. He stayed consistently within the chord structure as his hands whirled faster and faster up the bass guitar’s neck. He added a bit of vibrato at the fattest part of the body for extra measure, a high-pitched whistle. Ervin tapped his foot to Spinelli’s balanced pulse. Spinelli chuckled.

Ubuntu ended with the funk classic “Butterfly” by Herbie Hancock.  There was no leader here—the song was dance and chance. The members signaled each other and smiled. Their sound swelled and fell together. They were one. By the time the piece ended, there was a warm glow on everyone’s faces. There was clap emojis from the chat and laughs from Rice and Ervin. After Ubuntu shared its light, the feed went black.

You can watch future installments of Mind The Hang here. Next week, July 29, will feature dancer Alexis Robbins and musician Dee Davis.