"We Are Human:" A Look Inside America's First Palestine Museum 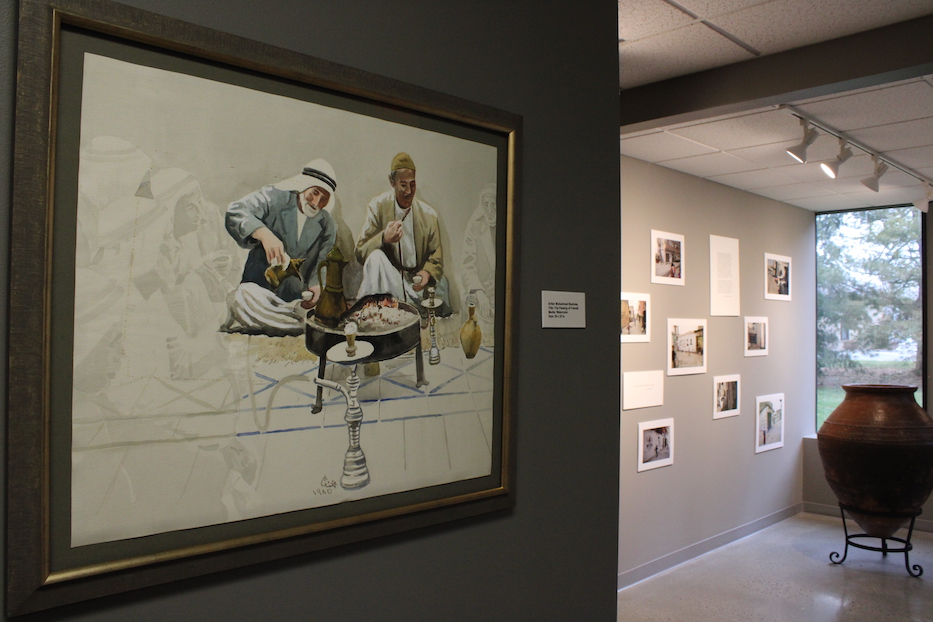 Serene, gently painted olive groves hang around the corner from pictures of rubble. Nearby, subjects stare directly into the camera in start black and white. A sweeping, long image of Jerusalem taken from a plane looms over books written by Palestinians. Arabic and English letters mix on the shelf.

There is always an air of pilgrimage to the visitors, who come to see each artistic representation of the Palestinian story.

Welcome to North America’s first Palestine Museum, a 6,000-square-foot gallery housed in a nondescript office building off the Litchfield Turnpike in Woodbridge. Open to the public on Sundays, the museum is now nearing its second birthday. Since 2018, the museum’s mission has remained largely the same: to educate the public, while opening their eyes to new artists from a vibrant and underrepresented part of the world.

“We have two artistic missions at the Palestine Museum: one is to inspire, celebrate and encourage Palestinian artists and showcase their works,” said Founder and Executive Director Faisal Saleh. “And the other is to convince Americans that we are human.”

The museum, which opened in April 2018, houses a densely curated and diverse collection with rotating exhibitions and events almost each week. The first room is filled with art: a woman stares out awash in a deep lapis lazuli, there are small prints of works found around the museum. It is an event room, full of chairs and a small stage, sometimes host to concerts and talks.

Further in, one is transported by each nook and cranny of the space into a different iteration of the Palestinian story. Books are strewn throughout the space, on nearly every surface, as if to affirm that there are so many stories that need to be told.

His family originated in Salameh, five kilometers to the east of Jaffa. During the Palestine War in 1948, they were forced from their home during the Nakba, the forced exodus of 700,000 Palestenians from their homes and their land. In Arabic, the word means disaster.

“My family basically walked out with whatever they could carry,” he recalled. “ They lost everything.”

The 11th child in his family, Saleh grew up in the West Bank. When he was a teenager, he traveled to finish high school at the George School, a Quaker school in Bucks County, Penn. His studies took to Oberlin College with an economics major. For almost 50 years after that, he worked in business.

Specifically, a museum dedicated to Palestinian art and its practitioners. In addition to visual art—the most current exhibition actually explores the idea of an “eternal Nakba”—the museum offers music, film, and lectures from visiting artists and scholars who are coming through the area.

“I thought that art is a much better way to tell our story,” he said. “ Art is a universal language, and we want Americans to know that Palestinians are human, and that maybe, as humans, they might be afforded human rights. It’s a good idea for us to have a presence to tell the story in a gentle artistic way.”

Three years ago, he put the plan into motion. He had the space already: he owned the office building in which the museum is now nestled. His family provided the bulk of the financial backing, although he is still actively looking into grants. He reached out to Palestinian artists around the world and began acquiring works. He designed a website and domain, press release, and social media campaign.

The works are framed and installed by Gabriel DaSilva, who owns a gallery and frame shop in nearby Westville. Currently, the museum has a board of directors of just three and a small army of volunteers who keep it running each week. Saleh tends to curate exhibitions based on what artists answer a call for work when he sends it out.

And yet, it has become the language through which he communicates a country and a people. The primary mission of the museum is still to celebrate and inspire Palestinian artistic excellence. It’s also to tell the Palestinian story to Americans.

“Everything we do revolves around those things,” he said. “It doesn’t have to be a Van Gogh caliber painting, but it should be of artistic metic. We want to encourage young artists with dreams. If they’re taking the time to paint in the middle of bombs we want to celebrate them.”

Subject matter is less relevant to him, so long as it has something to do with Palestine. One of the most appealing aspects of the museum is its sheer variety of art: not everything deals strictly with violence, war, or the Israeli occupation.

Sprawling landscapes dotted with olive groves and depictions of pastoral life have as much prominence as abstract impressionist paintings and more severe, almost biblical depictions of the Nakba.

Ismail Shammout’s Where to…?, for instance, is a heartbreaking depiction of the Nakba. In the painting, a grandfather and children wandering in a desert.The grandfather looks exhausted; he hunches and carries a cane as one child rides on his back and another looks up at him, supplcating.

It stands mere feet away from Samia Halaby’s Angels and Butterflies, a vibrantly angular abstract piece in bright blue tones. A firework of color bursting out from the wall, it feels like light and airy foil the more somber paintings, a testament to living color of the depth of experience on the part of all Palestinians and how they interpret their own stories.

The art by necessity must speak for itself. There are no wall labels or didactics,  although most frames have the name of the artist. Every medium has its own message, and every piece longs to draw the viewer into conversation. Together, the collection pokes holes in any monolithic idea of what Palestine is, was, and will be. Some paintings made it through bombings; other paintings are prints while the originals are still waylaid in Jordan.

Nestled at the very heart of the museum, one series stands out as one of the space’s most striking installations. A set of crayon drawings, hung on clothesline, line a wall. They are a mosaic of children’s eyes on history, depicting in crayon and colored pencil the horrors of Israeli occupation. Trees frown; some are chopped down entirely. Figures are more often horizontal than vertical. Silver weapons gleam in four-fingered hands.

This body of artwork arrived in the U.S. in 2010, as a project called “A Child’s View From Gaza” from the Middle East Children's Alliance (MECA). The drawings, rendered in crayon and colored pencil, depict life during and after Operation Cast Lead, a 22-day military attack from Israel on Gaza that lasted during December 2008 and January 2009. Over 1100 residents of Gaza, including women, children, and families, were killed in the attack. Now it hangs in the museum as a permanent installation—and a heart-rending reminder of the realities of war through the eyes of a child.

The series did not have a permanent artistic home, however, until arriving at the museum. In 2010, the series travelled around the U.S. and Canada, where it was shown in churches and community art centers. It was not without controversy: the series was pulled from an exhibition at the Museum of Children’s Art in Oakland, Calif. in 2011 (it was shown temporarily at a downtown venue instead), and again from an arts center in Canada in 2013.

Saleh acknowledged that Palestine is a controversial subject in American discourse. In 2018, U.S. President Donald Trump moved the U.S. Embassy to Jerusalem, in what many have called a resounding statement of pro-Israeli sentiment. Recent legislation has attempted to criminalize support of the Boycott, Divestment, Sanctions (BDS) Movement, including anti-occupation free speech.

But he is adamant that while the museum is dedicated to telling the story of Palestine —as it was and is experienced by Palestinians—it will do so free of religious or political agenda.

Instead, he said, it will do the most powerful thing it can do: not shy away from telling the whole story of Palestine. It is a story that includes exodus, oppression, violence, the systematic destruction of land and homes, arrest of children, and the creation of what the U.N. now calls an apartheid state.

As it barrels toward its second birthday, the museum has several exhibitions and events on the horizon. On March 8—International Women’s Day—it will open the first and largest exhibition of art by Palestinian women It will also be hosting several concerts and talks.

On a recent Sunday, college class of Bard students walked around. A Palestinian family wandered the galleries. A matriarch stopped and stared at a pastoral portrait of women holding a vessel. She seemed transported, staring at a memory as well as the art.

Two small children ran around the main gallery. This was a place for families and future generations: a museum that looks at the past, present, and future of Palestine with hope.

Find out more about the Palestine Museum US at its website. For More information on the International Women's Day exhibition, click here.