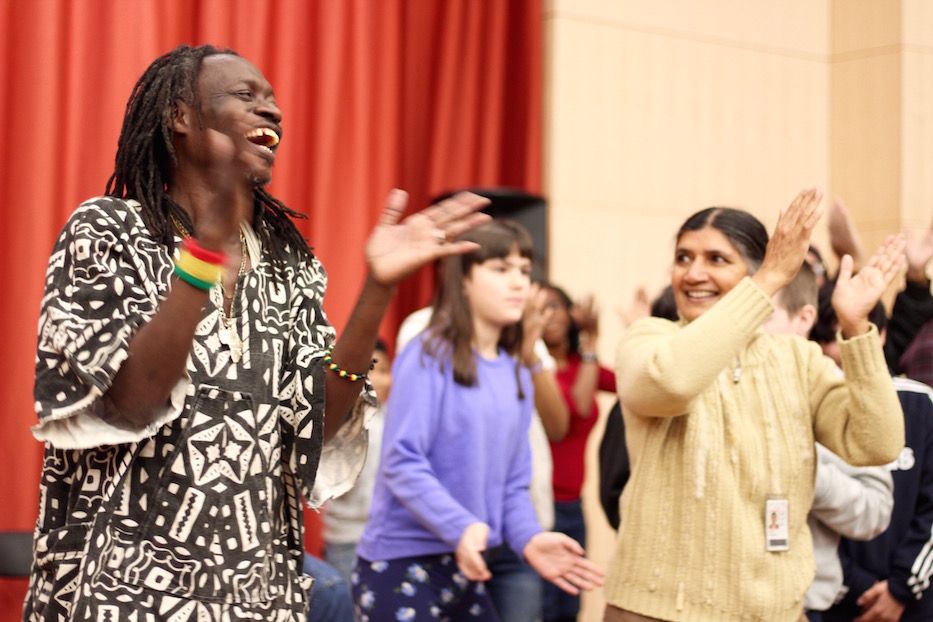 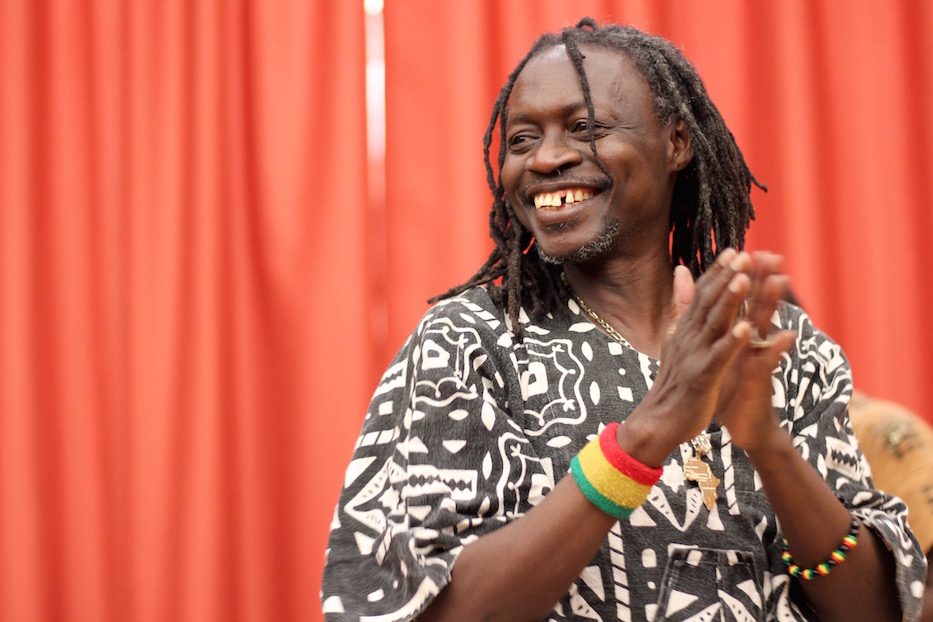 Seny Tatchöl Camara was conjuring Sörsörnë. From his flattened palms, a rhythm rose that connected him to a heartbeat, and a heartbeat to Guinea. Sörsörnë danced in, white and red raffia flowing. Feet pounding, the costumed figure moved toward the center of the floor. To the drum, a joyful quickening, Sörsörnë began to rise.

Monday, Sörsörnë arrived at the Marsh Lecture Hall via the Kouffin Kanecke Company, a New Haven based group that teaches West African dance and drumming in the city. The performance was part of the 24th annual celebration of Martin Luther King, Jr.’s Legacy of Environmental and Social Justice, an initiative of the Yale Peabody Museum of Natural History and the New Haven Museum.

In addition to the Kouffin Kanecke Company, the two-day celebration featured local musicians, spoken word poets and storytelling artists, and dancers from the Keepers of the Culture Performing Arts Company.

“This is all about joy,” said Kouffin Kanecke founder Aly Tatchöl Camara, who came to New Haven from Guinea over 20 years ago. “This has a kind of power. It connects me with the ancestors. Sometimes, I don’t even know what I’m doing, and they guide me."

“My middle name, Tatchöl, means medicine man,” he added as almost an afterthought. “This is my medicine.”

Monday, those ancestors him as he took the stage with the company. As Tatchöl Camara eased into a rhythm, he soared between three squat drums, shoulders pumping. Around him, members joined in, each responding to the call without ever adding words to the mix. At the far end, New Havener Taurice Brown lifted her shekere (also called a djabara), hands moving in perfect time.

Closer in, Judith Rochon and Inara Ramin began to work out a heartbeat. Tatchöl Camara’s son Seny, who has been playing since he was tall enough to stand and is now an adjunct professor at the University of New Haven (he also plays in the local group The Lost Tribe), unleashed a gallop as his palms struck the taut skin of his djembe.

In the audience, a few attendees clapped along. Some had started to dance, very quietly, in their chairs and in the aisles. Others sat at the edges of their seats, waiting to see and hear what was coming next.

This was a kind of musical alchemy. At one point, Tatchöl Camara ceded the stage to other members of the company, nodding along before standing and moving to the sound as it coasted over the room. At another, he headed for the wings and Seny took over. Placing his djembe beside a microphone, the younger Tatchöl Camara explained that he was planning to summon Sörsörnë, a masked and fully costumed figure that grew taller as it danced.

The louder and more enthusiastic the group was, he explained, the more likely Sörsörnë was to come and dance alongside him. The quieter the group, the less sure he was that Sörsörnë would appear. Attendees watched, spellbound, as he began to hammer out a solo rhythm. His eyes turned skyward and then adjusted to the audience. As the company joined in behind him, a percussive orchestra, he readjusted his djembe around his shoulders and stood, playing directly to one side of the room.

His hands transformed into a tongue, rolling quickly on the roof of a mouth they knew well. They became a song weighted with history, ready to tell a story for the hundredth time. As he walked toward the right hand side of the auditorium, Sörsörnë approached, drawing a few surprised cries and gasps from the crowd. (Watch the interaction in the video above).

Tatchöl Camara continued to play, sinking deeper into his instrument as the drum sang out from beneath his hands. Sörsörnë moved to the drum, rising higher and higher with each strophe. 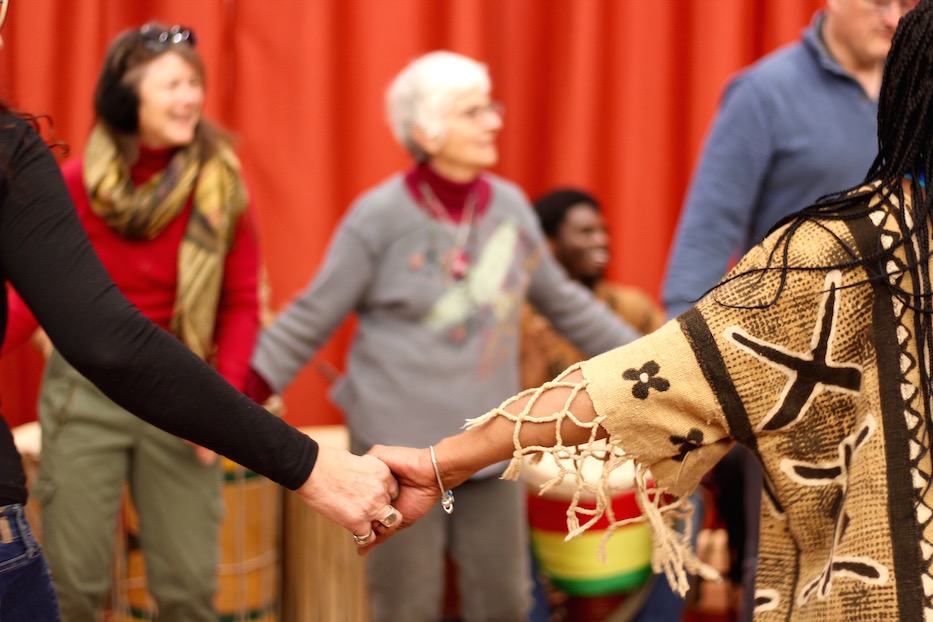 “Now, it’s your turn!” Tatchöl Camara said as Sörsörnë danced off, and he waited for his father to come back on. “You can be anybody. You can have two left feet, you can have all big toes. It doesn’t matter. We’re gonna make you dance. And you’re gonna have some fun.”

A few attendees ventured onto the floor, sinking back near a red scrim before Brown ushered them to the front. Ramin began to play, a rolling rhythm that made it hard not to move some part of one’s body. Aly Tatchöl Camara returned, lifting his arms to the sound. More bodies headed to the front of the room until there was a moving, beating mass, grins spreading from one side of the auditorium to the other.

After the performance, Aly Tatchöl Camara said that he sees the work as promoting both cultural understanding and compassion, in which musicians and dancers understand that they are part of a whole. Without the whole, no single movement or sound exists as well. 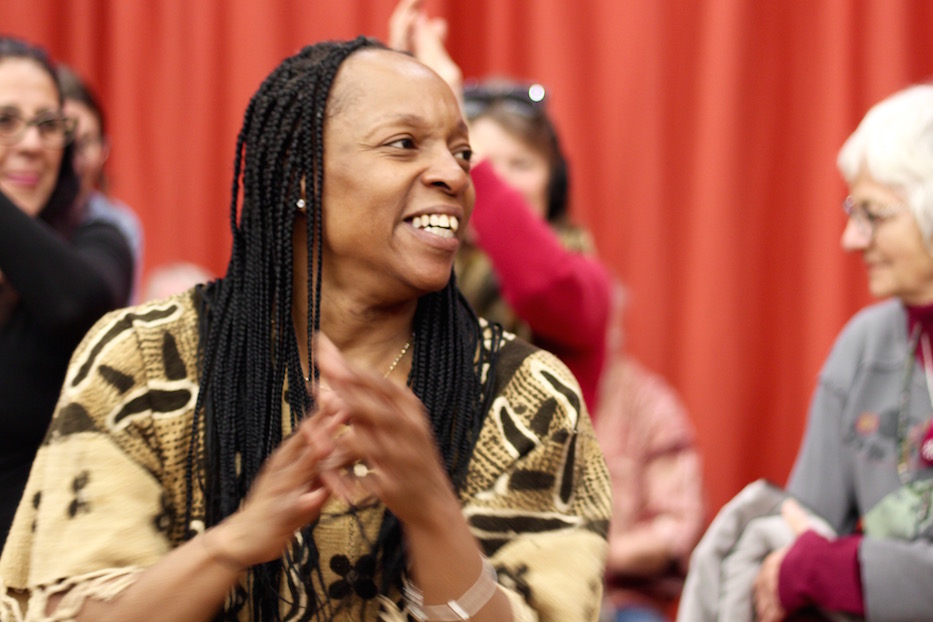 He said he sees that work as honoring the legacy of the late Martin Luther King, Jr., particularly in his vision of  mutual respect for one’s fellow man, regardless of background.

“That’s what it’s all about,” he said. “We are people. He was doing this for people. If I fall down right here and you are beside me, you are going to help me up. As human beings, we’ve got to respect each other.”

To find out more about the Kouffin Kanecke Company, visit their website.