A Book Of Revelations 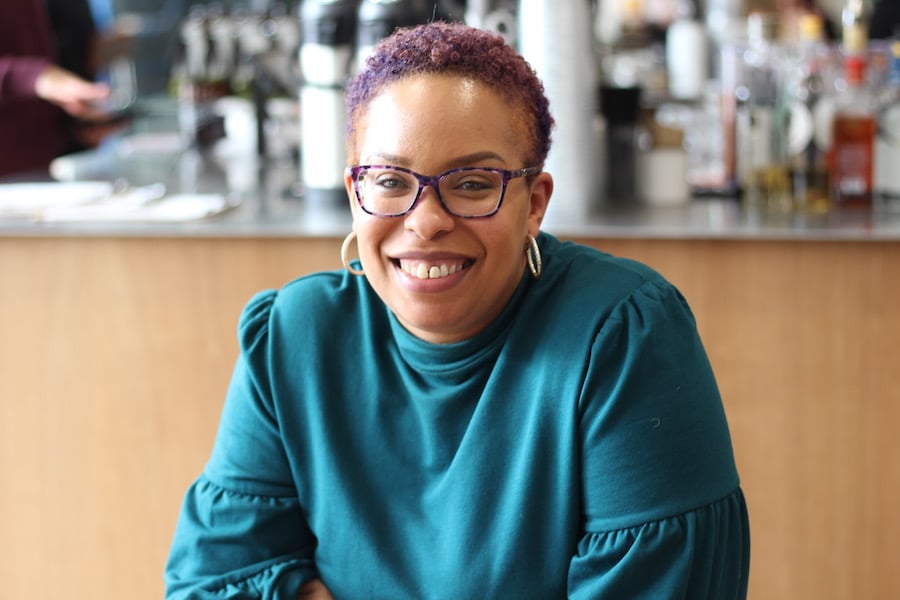 It’s the tag, hanging there on a string, that hooks the little boy’s attention. It’s a simple thing: off-white and blocky, attached to some twine that extends beyond the frame. He doesn’t know exactly where it leads, but he decides that he’ll follow it wherever it goes. And he does: past the house, through the yard, up every branch and into the cosmos. He takes a breath, and keeps going.

“What you have found will lead to the rest of your life!” the tag promises as he goes on his way.

That journey marks the beginning of Suddenly, I Found It!, a new children’s book written and illustrated by Beaver Hills resident and Advocate Lab founder Genese Clark. This weekend, Clark will hold a “story days” event at the Whalley Avenue police substation, part of an ongoing push to get the book into the community. The event is free and open to the community. Registration and more information is available here. 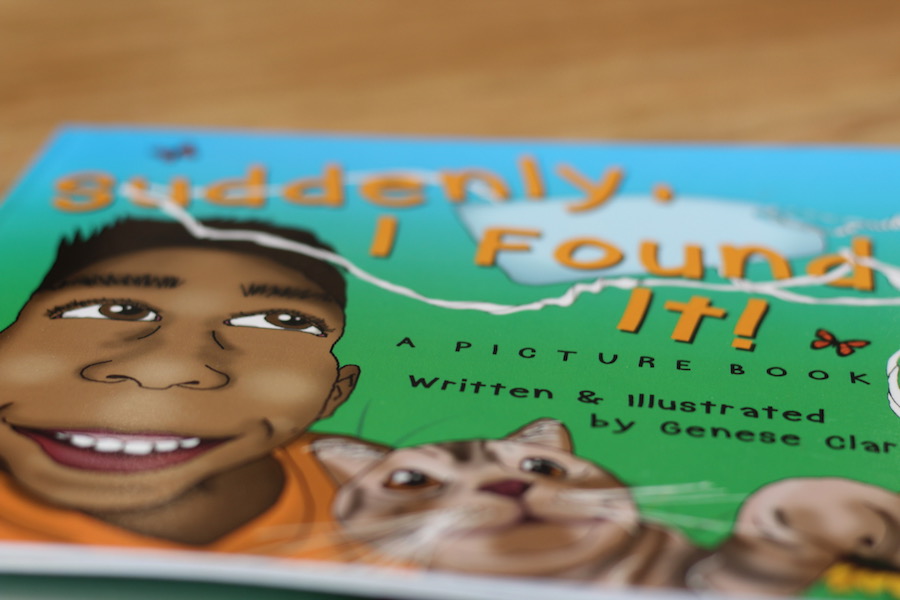 Suddenly, I Found It! Tells the story of a young boy—he is actually modeled after Clark’s 8-year-old son Kingston—who stumbles on a tag that announces the beginning of a journey. Tied around it, a length of string stretches past the page, urging the reader on. He follows it doggedly: through sun-dappled tree branches and into parks, under stars and in-between whizzing paper airplanes, into space itself. Only at the end of the book does he realize that what he’s been looking for has been there all along, because this adventurous, tenacious string lives within him too.

But it is Clark’s own story, rather than her son’s, that first led to the book. Long before she wanted to write and illustrate, Clark was a kid growing up in New Haven’s Westville neighborhood, the daughter of Fire Battalion Chief Anthony Calloway and a ghost writer mom who ultimately started her own publishing company (Clark joked that the book really is a family endeavor—it was published by her mom's imprint). At home, her parents focused on a mantra that would later become the foundation of her work: "Put God first, think for yourself, stick together, and never give up."

Story ran through her blood—her uncle and grandmother were both writers, and the latter was posthumously published—but she found herself pulled in another direction, towards service and family counseling. In high school and college, Clark started taking service trips—first Nicaragua with New Haven’s Sister Cities initiative, and later South Africa, Zambia, Zimbabwe and Botswana. After her time in Botswana, she pursued graduate work in family counseling at the University of Nebraska, working remotely as she grew a life in New Haven. It was only after years in that line of work—and starting to raise three kids—that she quit her job in 2015, and started Advocate Lab full time as an art incubator on her sunporch.

“Eventually, I said: 'screw the status quo in my life,'” she recalled. “I’m gonna go after my dreams and I’m gonna become an artist after 37 years.”

She threw herself into her artwork and into building Advocate Lab. Then in 2016, she drew a picture that made her stop in her tracks. In it, an open box sat at the center of the frame, her hand hovering inside. Try as she might, she couldn’t figure out what was in the box. Her pastor, with whom she was studying Theresa Dedmon’s book Create Supernaturally, encouraged her to “really meditate on that, and pray, and reflect on what more there is in this picture.”

“Just like this little boy goes on a journey, I went on my own journey,” she said. “And the string is representative of our heartstrings. And I followed my heartstrings. I started doing stuff that I had never done.”

But still, Clark wasn’t quite sure what was in the box. She spent a week tossing and turning, the box infiltrating even her dreams. She found herself waking up in the middle of the night, frantically scribbling thoughts about what the object might be. Days into her quest, she headed to Pittsburgh for a conference. 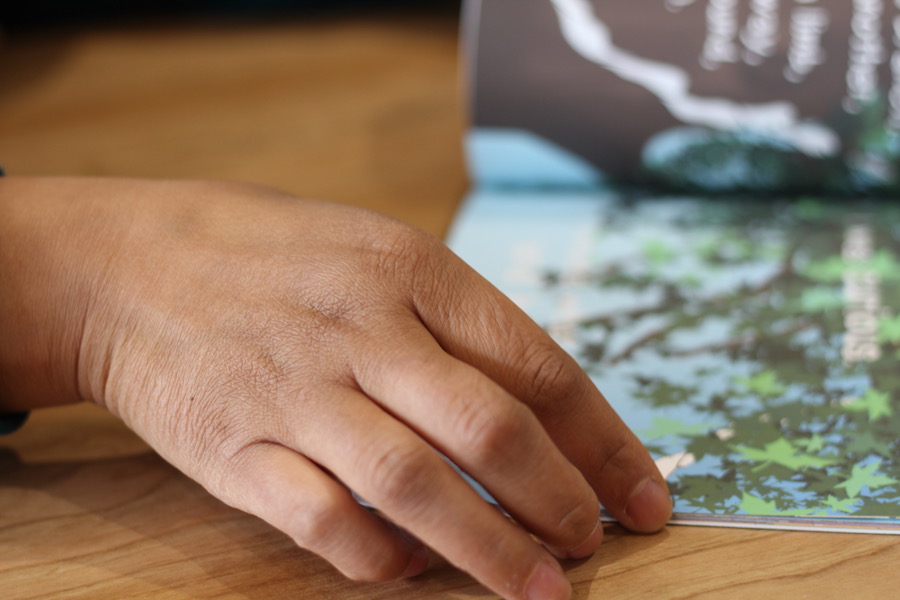 It came to her that night, after she landed in Pittsburgh. At her hotel, Clark found herself scrolling through Facebook, stopping on a video that her mom had uploaded from North Carolina. In it, Clark’s brother was holding his monthly Paint N’ Play showcase, an evening of pottery and art. At the mic, a spoken word artist was reading an original poem. Clark felt as if she was right there, in the space.

“He was saying, ‘people ask me how I write these words,’” she recalled. “And he goes, ‘it’s because I am the words! I am the words.’ And it was like the lightbulb went on. The fog rolled away. I was like, oh my gosh, I’m the gift in the box.’”

Clark collapsed to the floor of her hotel room, overwhelmed by the discovery. Then she decided to figure out what it meant to be the gift in the box. To take it out of the box, leave behind the tape and packing peanuts, and follow those heartstrings.

In 2017, she had her first public art show at the Whitneyville Cultural Commons, collaborating with musician Lara Herscovitch because she saw herself reflected in Herscovitch’s song “Wingspan.” The following year, she scored a grant from the city and started working with members of Advocate Lab and the Beaver Hill neighborhood to do a community-wide mural day and cleanup of an overgrown, abandoned lot on Blake Street. Then she turned her attention to telling the story. 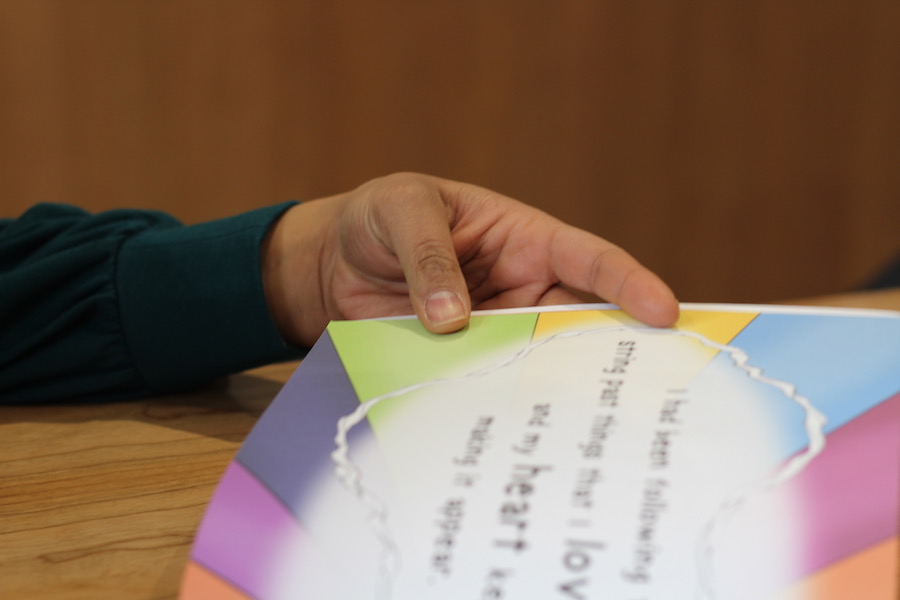 In the book, the little boy walks through the neighborhood, following a length of white string that doesn’t seem to end. He meets friends along the way: the neighborhood dog Fred, ladybugs and butterflies in the nearby garden, even a robot who accompanies him on his way to the shower.

The string is there when he lays down and when he wakes up, when he navigates the cosmos and finds himself haloed at the technicolor center of a rainbow. Only at the end does he realize that he can follow it forever, because it lives in him.

As she was writing, she also found herself having fun with the illustrations, which range from New Haven’s parks and backyards to fantastical dreamscapes. When it came to the cover, Clark said it was important to her to feature a young man of color not just because he is her son, but because kids and parents deserve to see themselves represented in the literature they are reading together.

Since publishing the book, she has presented the book at several schools, trying to spread its message “because I just want to impact my community.” At Elm City Montessori, teachers have chosen the text for the school’s “One Book One School” initiative, meaning that every class at the school has read the book.

Earlier this year, she received another grant  from the city specifically for story days programming, which will allow her to continue touring with and reading the book through March, April and May. At an upcoming session in the Whalley/Edgewood neighborhood, attendees can build a book using words or art and bring them home. When she’s not presenting on the book, Clark will be working on neighborhood beautification each Saturday.

“I feel obligated to this city,” she said. “To make it better. I don’t want to leave unless I can say that this city is better than when I first came on the scene in 1980. And I want my kids to feel that way too.”

The next event for Suddenly, I Found It! takes place March 30 in the community room of 332 Whalley Ave. To find out more about story days, check out Advocate Lab on Facebook. On May 20, Clark will close Story Days at the Connecticut Center for Arts & Technology ConnCAT with music, poetry, and a celebration of books.