Who Gets To Live On Stolen Land? 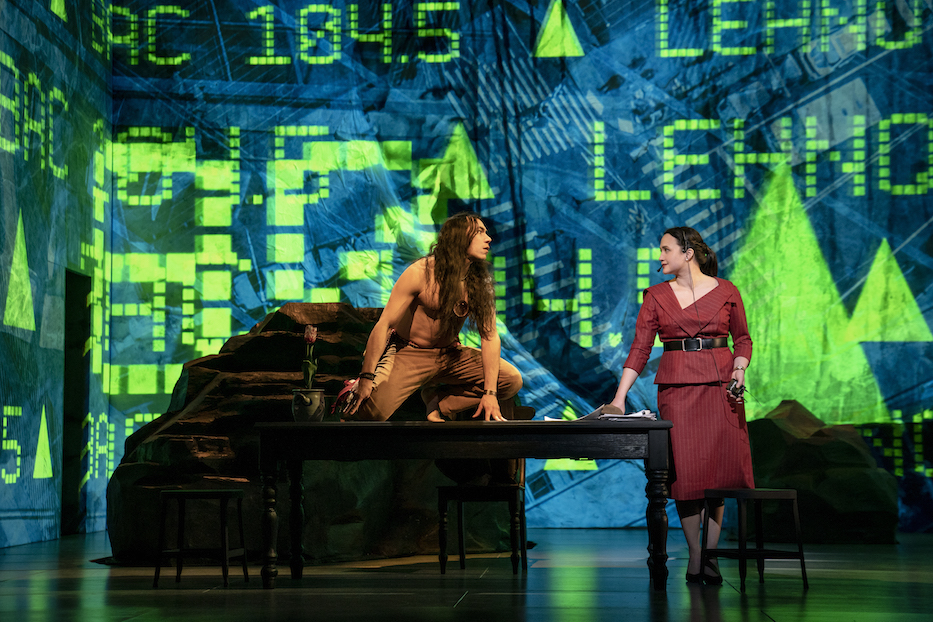 The stocks are climbing again, and Jane Snake is to thank for it. So there’s been a dip in the market, she tells investors through her headset. But look at this quarter’s earnings. They’re good. Really good. Red arrows are inching back into the green. In the office, the CEO of Lehman brothers pumps his arms with vulgar excitement.

As she speaks, a member of the Lenape crouches on her desk, then springs to the front of the stage. A shot rings out, and then another. He crumples. Stocks continue to climb. Fourteen hundred miles away, her mother is losing her home. It has been hundreds of years in the making.

Those layered, thick histories define Manahatta, running at the Yale Repertory Theatre through Feb. 16. Written by Mary Kathryn Nagle and directed by Laurie Woolery, the play interweaves the 2008 global financial crisis and bankruptcy of Lehman Brothers with the “sale” of Manahatta from the Lenape to the Dutch in 1626.

The structure is always there. The degree to which the play is finished may be another story.

From its outset, Manahatta’s greatest strength is Nagle’s ability to graft histories onto each other. As the lights come up, the audience meets Jane Snake (Lily Gladstone), a member of the Lenape and eager-eyed MIT grad who has landed an interview at Lehman Brothers. In a glass-walled office in Manhattan—called Manahatta by her ancestors—Jane convinces Joe (Danforth Comins) to bring her on as a securities trader, just narrowly landing the job when she announces she flew out from Oklahoma despite her dad’s open heart surgery.

Back in Oklahoma, her dad dies on the table. Her sister Debra (Shyla Lefner) is struggling to get federal funding for Lenape language classes. Her mom Bobbie (Carla-Rae) is soon knee-deep in debt to a church-touting loan shark, and on the brink of losing the family’s home. It’s the first of many times Nagle nimbly connects the histories of predatory lending, material wealth, and the violence of white supremacy to evangelical Christianity. 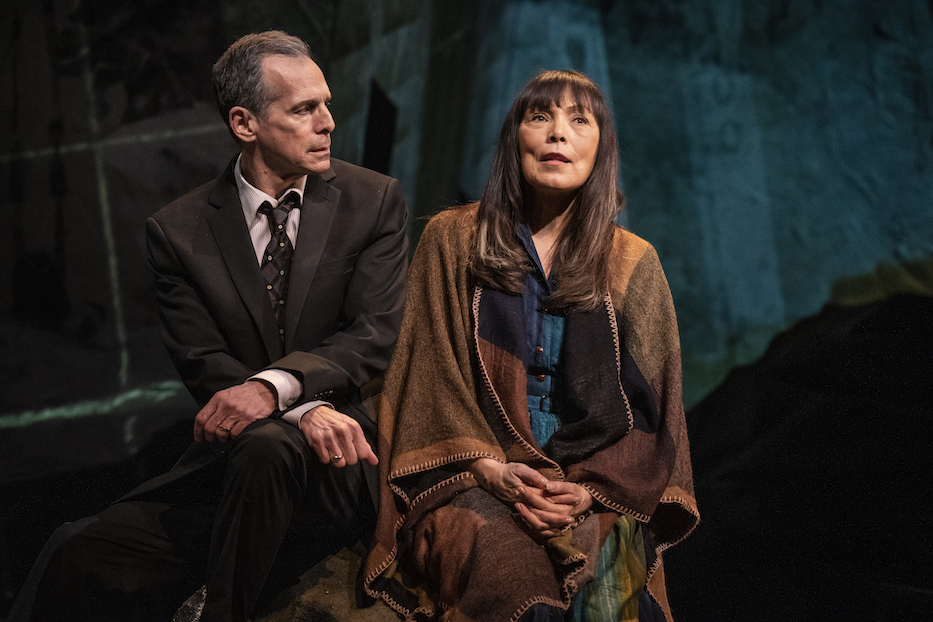 To this, Nagle layers the alleged purchase (read: theft) of the land by the Dutch from the Lenape in 1626. It's a smart collapsing of history, in which cultures with fundamentally different understandings of earth, capital, and domain (Dutch and Lenape; Wall Street banker, hungry investor, and homeowner; patriarchal and matriarchal) are pushed together with devastating consequences.

Nagle writes with wit, aware of the weight of history but also its ridiculousness. Her characters, working across centuries, deliver both weighty lines and zingers that speak directly to how little white people (or people who have come to be known as white) understand about society as a collective, and how much they have shaped it by brute force and manipulation.

Many are based on real people: Lehman Brothers CEO Dick Fuld (Jeffrey King) doubles as Dutch West India Company Director Peter Minuit. Comins plays both Joe and Jakob, an early fur trader and Minuit’s second in command. Smith’s Michael is also Jonas Michaeluis, who attempts to bring Christianity to a people who have never needed it.

And at the beating heart of the show, Flores plays both Luke, Michael’s adopted (although whether the adoption is more of a theft, we're also left to wonder), Indigenous son and an aspiring banker, and Se-ket-tu-may-qua or Black Beaver, the great love of Gladstone’s Le-le-wa’-you.

Cast members are adept at jumping between centuries, bringing to life a history of violence, cultural exclusion, and disenfranchisement by design. King and Comins step back into the 1600s with the pull of a zipper. A shirtless Se-ket-tu-may-qua becomes a jittery Luke with the addition of a rumpled button-down and suit jacket. Jane changes out of the blazer and dress that she has interviewed in—which is also Le-le-wa’-you’s dress—for a suit that can get her to Lehman’s second in command.

In addition to quick changes (costume design by Stephanie Bahniuk), credit here is due to scenic designer Mariana Sanchez and projection designer Mark Holthusen, who have created a stage that marries large, glossy boulders with a Wall Street office and Oklahoma home.

Somehow they all fit, from a projected photograph of the real-life Se-ket-tu-may-qua to a rocking chair from which Debra sings in the Lenape language. Around these three locations, fixed and unfixed in time, the audience takes in kinetic movement (props to movement director Ty Defoe), lines of speech and song in Lenape, and deep nods to Native artmaking and material culture. They lend themselves particularly well to Fortes, whose Se-ket-tu-may-qua is one defined by tenderness and deep knowledge that transcends speech.

It’s particularly effective in scenes that one sees multiple times, split across some 400 years. As the Lenape are offered guns, horses, and wampum for the island of Manahatta, Nagle sets up a composition that she can repeat over and over, like some horrible film on loop. Watch it once, and the Lenape are being forced from their land. Watch it again, and Bobbie is putting her home up as collateral. Watch it a third time, and the impending bank bailout is about to leave millions of Americans in the lurch.

To it, Woolery has juxtaposed kinetic, lush vignettes with extreme economic (and sometimes physical) violence, in a contrast that succeeds in making one uneasy. 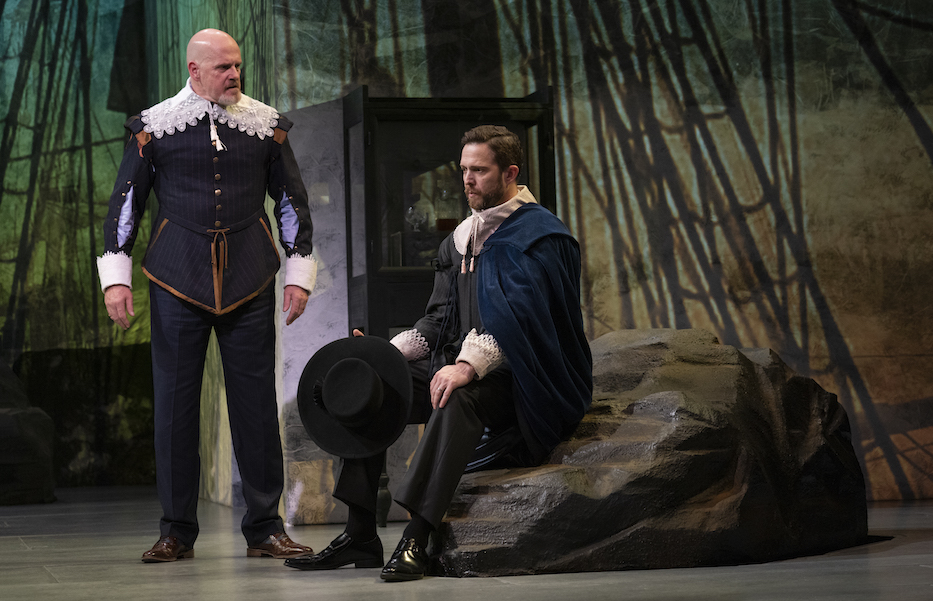 Together, the writer-director team have constructed an enduring sense of right and wrong, replicating phrases (“capital, commerce, ownership” is a big one, the use of addictive substances is another) across scenes to reveal how history repeats itself. Bobbie mentions fry bread, and so broaches the complexity and violence of commodity foods. Michael references a property deed, and invokes long histories of stolen land, forced migration, and redlining. Debra pushes her mother to speak Lenape, and gets a lesson on the brutal “re-education” programs for Indigenous children that ran well into the twentieth century.

But if it is a much-needed history lesson, Manahatta at times leaves one wanting more depth from its characters and from the script. The play begins with a land acknowledgement that is tailored to the theater, but still leaves out the names of the Indigenous people who stewarded the Connecticut land long before it was Connecticut (that information is included in the program and in the lobby).

Perhaps it’s meant to be broad, leaving the audience wondering how much of the nation is built on stolen land. But it takes a risk of allowing audience members—particularly white audience members, who are direct beneficiaries of this history of violence—to remain comfortable during and after the performance.

Within the script, Nagle sometimes relies too heavily on archetype for the characters to be real people. That's not always the case: Debra is both a teaching tool and fully realized person, whose exhaustion and optimism are palpable. King, Smith and Comins are all fairly unctuous and worthy villains, but statements like “he’s definitely gone off the reservation” and “it’s never enough on Wall Street” seem believable when one remembers that a white nationalist with a history of wage theft is the president of the United States.

It’s less true for Bobbie, whose reliance on self-deprecatory humor and overly sentimental asides sell Carla-Rae short. While she is most dynamic when she shows her agency—in a heart-rending scene near the end, she takes being verbally wounded by wounding back—she doesn’t get to do it nearly enough. So too for Flores’ Luke, a canary in a coal mine whose existence remains too much of a plot point. 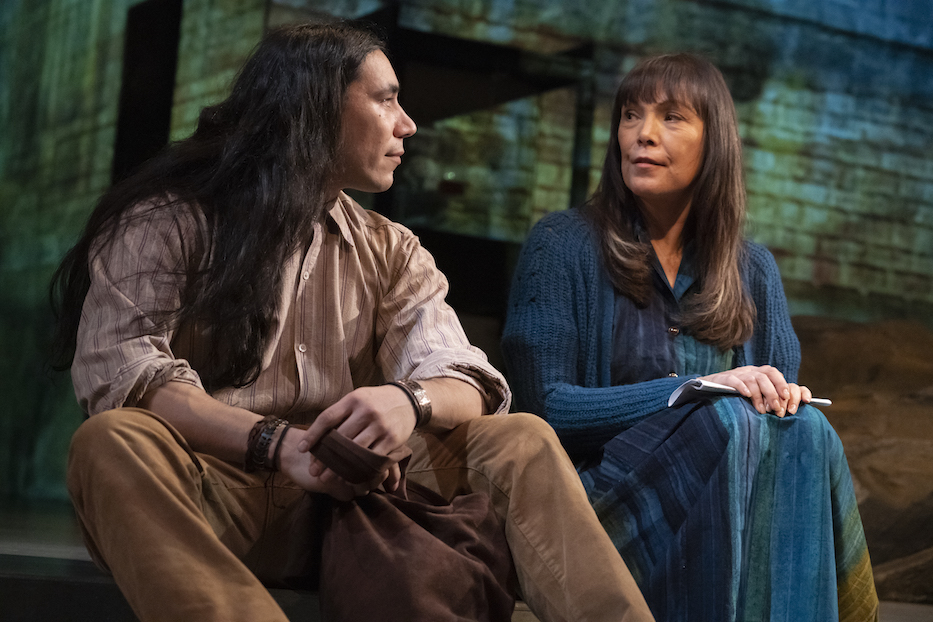 In a scene that throbs with potential, he tries to navigate the complexities of "passing" in the small-town financial world as Bobbie comforts him on her doorstep. She is about to lose her home, where her family has lived for generations, and stunningly calm in the face of it all. Luke's hair falls loose around his shoulders; the moment is ripe for revelation. But her speech feels canned, dripping with poetry and sentiment that we've heard before. She over-explains to the audience, and loses the moment's intimacy in the process.

As both Jane and Le-le-wa’-you, Gladstone is keen and resilient, holding her heritage close and at arms’ length at the same time. Her transformation on Wall Street is fascinating to watch: checking the math on subprime mortgages, listening skeptically as she’s told to ignore that math, and ultimately closing deals that she knows aren’t tenable.

Gladstone brings a sharp edge to the role. She pushes back against her superiors (who are also her seventeenth-century oppressors, if one wants to go there) even while she’s code-switching into their slick financial language. She endures their humor and their machismo because that's what women of color do: endure to survive and, in this case, thrive.

But if she struggles between these worlds, the audience doesn’t get to see much of it. While she comes to barbs with Bobbie and Debra, they are short-lived, and the sense of resolution feels premature. At her most complex, she shows that financial power is intoxicating and real, even for those who have been its victims. But is she selling out, or is she reclaiming what is hers? If it’s the second, at whose expense does it come?

Maybe that’s the point: these characters are an amalgam of the people Nagle has met in the process of writing and workshopping the play (the team has also worked with Lenape Cultural Consultant Joe Baker), and in her fight for Indigenous rights as a partner at Pipestem Law. But it leaves a gnawing feeling that there’s more there, sitting dormant on the stage, ready to come alive.

Manahatta is still very much a story of what capitalism takes—and takes, and takes—from those who do not conform to its boundaries or to its default whiteness. It is a vital educational text, reminding audiences that the exploitation of Indigenous people was the first step in the creation of an economy based on white supremacy, economic deprivation, free labor, and generational trauma. When Peter Minuit mentions that "we have negroes" after the Lenape are forced from the land, when Michael asks for proof of a deed, when Bobbie is forced again to move, it's all by the same design.

And it's a telling based on lived experience. In this sense, it is a forceful call to arms to do better, from big national policies to small lessons in the classroom. It is hard to watch the play and not think of the adage, often repeated by the city's activists, that no one is illegal on stolen land.

Whole centuries are at stake, after all. Isn’t that the point?