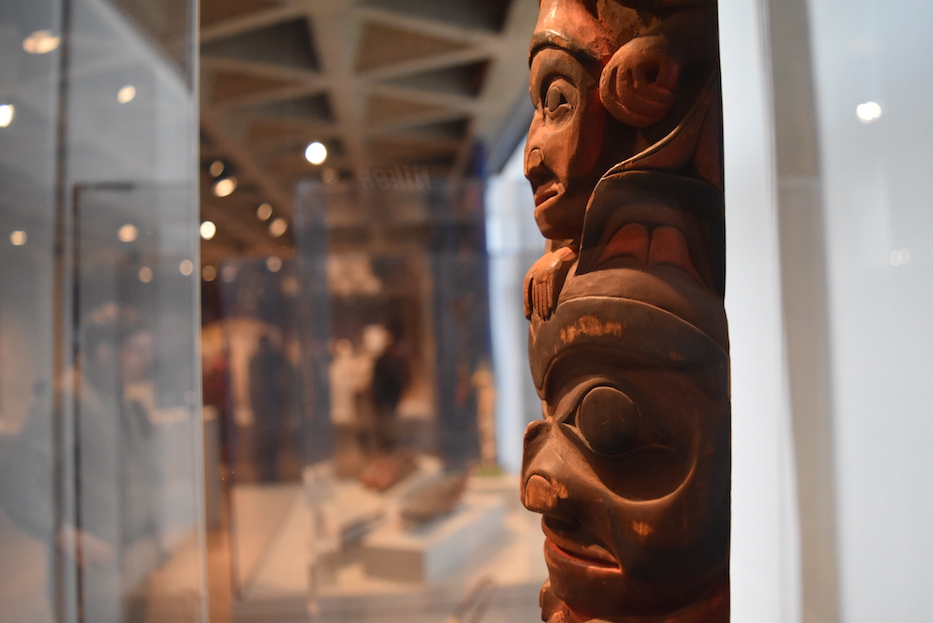 A zigzag design winds its way around the paper basket like mountain peaks or the serpentine path of a river. The design fades from the light gray of a cloudy sky to the smoky, slate blue of the mountains; the soft colors contrast with the scissor-smooth edges of the paper strips that make up the basket. Woven through the photograph of the mountain peaks is a tea-stain-colored paper with fragmented writing and the thin, jagged lines of a map.

In Our Lands Are Not Lines on Paper, Eastern Band of Cherokee contemporary artist Shan Goshorn has taken a historic settler map, sliced it into ribbons, and woven it into a Cherokee-centered definition of the Great Smoky Mountains. It’s one based on natural landmarks, not maps. In so doing, she has used the very medium that was a source of oppression in the past to reclaim agency in the present.

It’s one of several works in Yale University Art Gallery’s Place, Nations, Generations, Beings: 200 years of Indigenous North American Art that does so. The exhibition, which runs through June 21, presents over 75 artworks that connect to the land; declare sovereignty; pass down artistic traditions; and unite humans and other living beings. 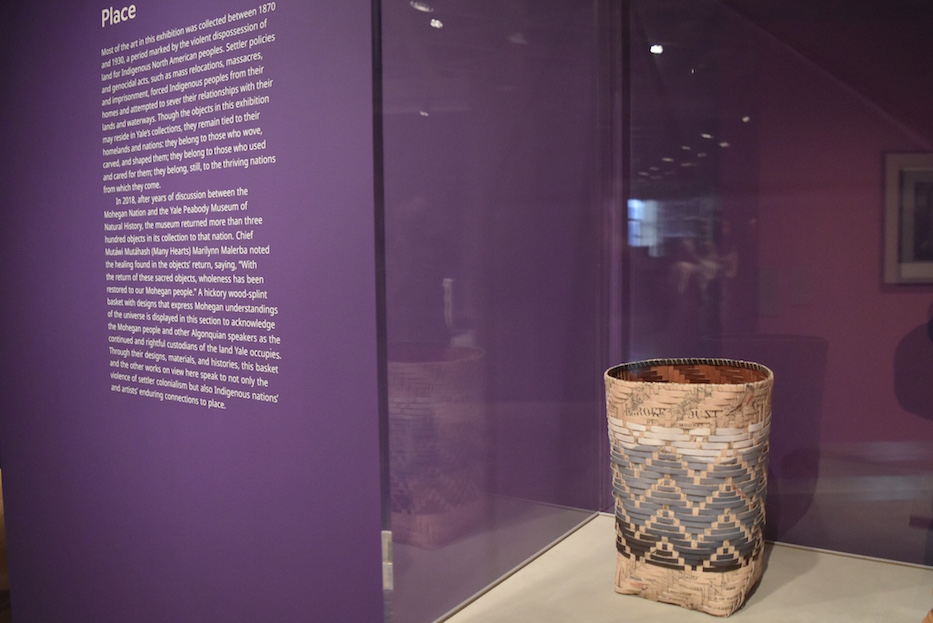 The exhibition is uncompromising in its re-centering of American history, placing the focus squarely on the Indigenous experience and Indigenous voices. Instead of "artist unknown," for instance, labels read "artists once known," reframing how art history is taught and who gets to teach it. The curators—all students—have done it in a way that feels challenging, yet accessible to a broad population.

Just a few feet away from Goshorn’s 2012 basket, a Dakota hide vest created in the late 19th century by an artist once known stands proudly in its case. Short lengths of smooth, delicate porcupine quills are dyed in muted blues, vivid purples and deep oranges. They adorn the soft, strong hide in patterns of flowers and butterflies. On either side of the chest sits a prominent and unexpected symbol: two American flags, their bright yellow flagpoles crossed.

The American flag is a controversial motif in Indigenous art, but for some it can be a symbol of resistance or a sign of respect for Indigenous veterans. This use of the flag, surrounded as it is by Dakota artistry, “asserts Dakota peoples’ continued presence on and ownership of lands within the current borders of the United States,” notes the accompanying wall text. 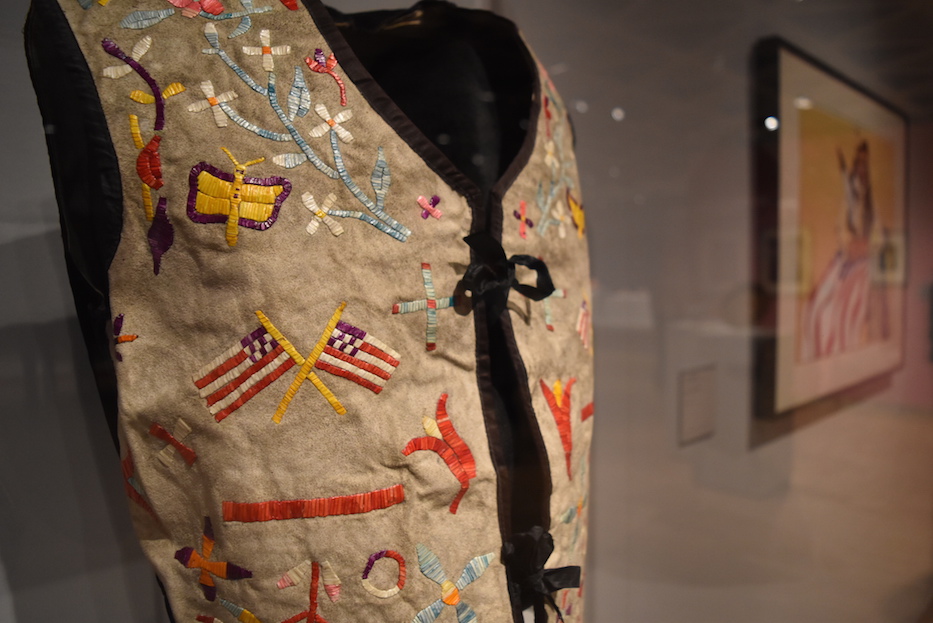 Strongly at work here is the idea that Indigenous identity—like all identity—is complex and intersectional, that cultural identity is rarely experienced in the same way by two people.

Near the heart of the exhibit is a clay pot with graceful curves. Contrasting smooth and matte textures create a crisp, elegant design on the black surface. It is the perfect foil to the tight-laced, earth-toned ridges of the Washoe basket right next to it, though their refined curves echo each other.

P’ohwhóge Owingeh artist Maria Martinez created this clay pot around 1920, taking inspiration from sherds of Pueblo pottery made in the twelfth to seventeenth centuries. When Martinez broke into the mainstream art market, she taught and uplifted fellow artists, helping them do the same.

Martinez’ work demonstrates clearly the constantly-evolving nature of Indigenous art. Some artists in Place, Nations, Generations, Beings revive ancient styles in a modern context. Others adapt traditional techniques to new materials. Still others work hard to further their art in the face of the disruptive forces of capitalism and tourism. 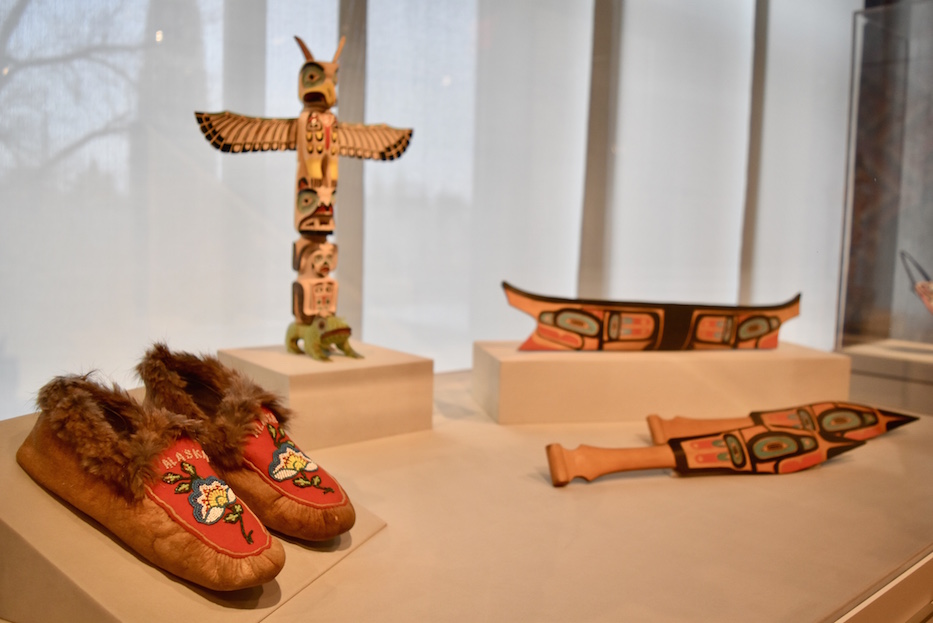 In one corner of the exhibit, objects that would normally fill an over-sized room are instead contained in display cases. A totem pole, painted white, has bold accents of black, red and green. Each animal on the pole holds the next, their eyes round and open wide.

There’s a bear with a mouth full of sharp teeth. A large and powerful-looking bird with wings outstretched. A frog with a wide red mouth and speckled green skin whose four legs form a sturdy base.

This model totem pole was made in the early to mid 20th century by Tlingit artist Sam Jacobs in a style traditional to Alert Bay, which is hundreds of miles from traditional Tlingit territory. Alert Bay poles are rooted in culture, intended to represent a family’s history, but since the style was popular with tourists, other artists began crafting them in order to make a living.

A second totem pole has animals with the same round eyes, but is darker, with more muted colors. The grain of the wood shows through in worn patches.

It is thought to have been made by a Tsimshian artist between 1910 and 1920. This was a time when, in the interest of suppressing threats to capitalism and supporting Christian missionaries’ efforts to eradicate Indigenous religions, U.S. and Canadian governments outlawed potlatches, the gatherings at which totem poles are often raised. Cut off from the cultural context of their art in its true form, artists made miniatures as a way of preserving artistic traditions. 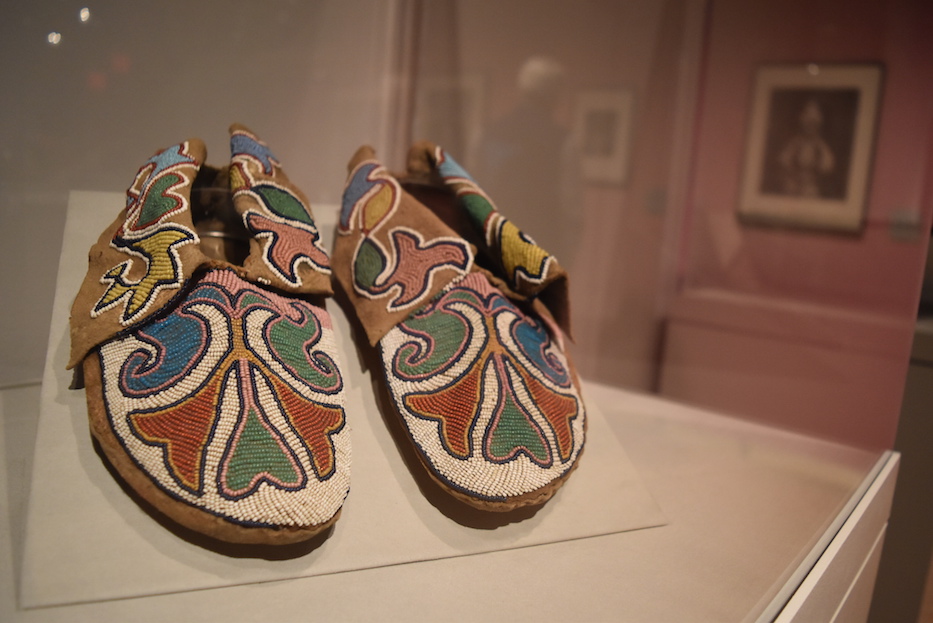 The exhibition is full of examples of the stunning ability of the human spirit to create art in adversity. After the U.S. government’s forced relocation of the Delaware, Iowa, and other Great Lakes nations to reservations on the Great Plains, these varied nations found themselves living in close contact for the first time. Out of this violent ordeal came a vibrant artistic exchange, known as the “prairie style”.

A set of prairie style moccasins, made in the late 19th century by an artist once known, are lit up in a display case. The beaded design is part floral, part geometric, with swirls and lobes of pink, blue, green, and red-orange against a sea of white. Rows and rows of tiny glass beads are gathered precisely and closely together, covering the entire top of the moccasin, the threads holding them in place barely visible.

Every single bead catches the light.