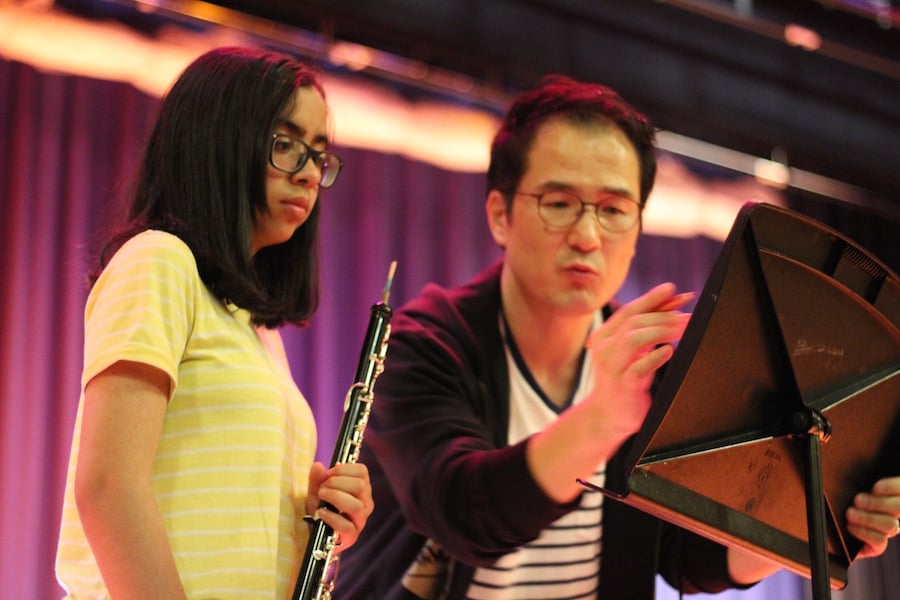 In the auditorium at Fair Haven School, the lights were turned down to a cool blue and yellow. Cold air settled into the room, wrapping the first few rows of seats. At the lip of the stage, Lyanna Baez lifted an oboe to her mouth and began to play. A warmth headed for the empty chairs and high ceiling. It nestled into the nooks and crannies around the room and bounced off the walls. Up front, Baez and the orchestra played on unaware.

A sixth grader at Benjamin Jepson Magnet School, Baez is one of three students—and the first middle schooler ever—to play with the New Haven Chamber Orchestra this Saturday afternoon, during its annual spring concert at the Fair Haven School on Grand Avenue. In a program that includes Bruch, Blauth, Mozart, Voříšek and Dvořák, Baez will join Co-Op High School senior Cristofer Zunun and ESUMS student Jonathan Yun for individual concerti. 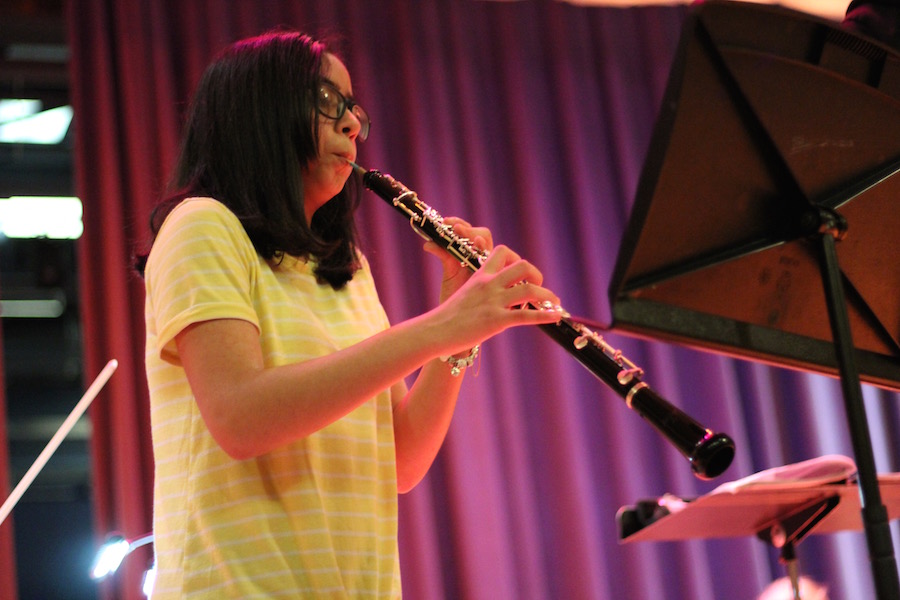 Baez has been rehearsing Brenno Blauth’s Concertino for Oboe and Strings in advance of her NHCO debut this weekend. A year and a half ago, she considered beginning the clarinet in school band. But her music teacher, Kenneth Caldwell, urged her to try out the oboe instead. To her, the instrument sounded unrulier than its woodwind cousin, with a tendency to squeak and squeal.

But Caldwell pushed her towards it, insisting that it was a good fit. She began to practice every day, sometimes for long stretches of time where she thought only of the music in front of her.

“You have to learn how to control it,” she said Tuesday night, preparing for a rehearsal with the full orchestra. “At first, I had to work hard to learn note names, and where they went on the staff. It was a little frustrating. But then I got better and better.” 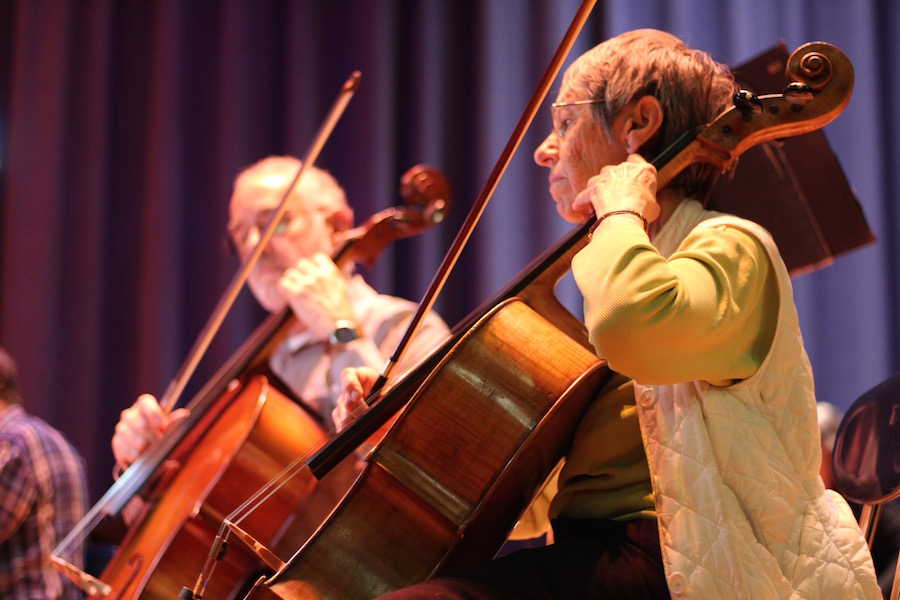 In under two years, she has joined the All-City Honors Ensemble, and then the Morse Summer Music Academy, both initiatives of the Yale School of Music. This year, she also works with two private music tutors from Yale who come into her school and give free lessons. She said she is excited to perform the concertino on Saturday, because it is unlike anything she’s ever done before.

“I like the character of it,” she said. “It’s perfect with the orchestra, and it really fuses well. It’s a very different experience than playing it with piano [accompaniment] or with school band. I love hearing the different voices underneath it. It just sounds good.”

As she took the stage, Baez channeled Blauth, easing into the composer’s piece with a slow, steady moan from the instrument. Cued in by cello, the concertino began to unfold like red silk, speckled with rich and inky splotches of black at its center. Right on cue, oboe came in smooth, traveling up and down a sort of melancholy staircase. 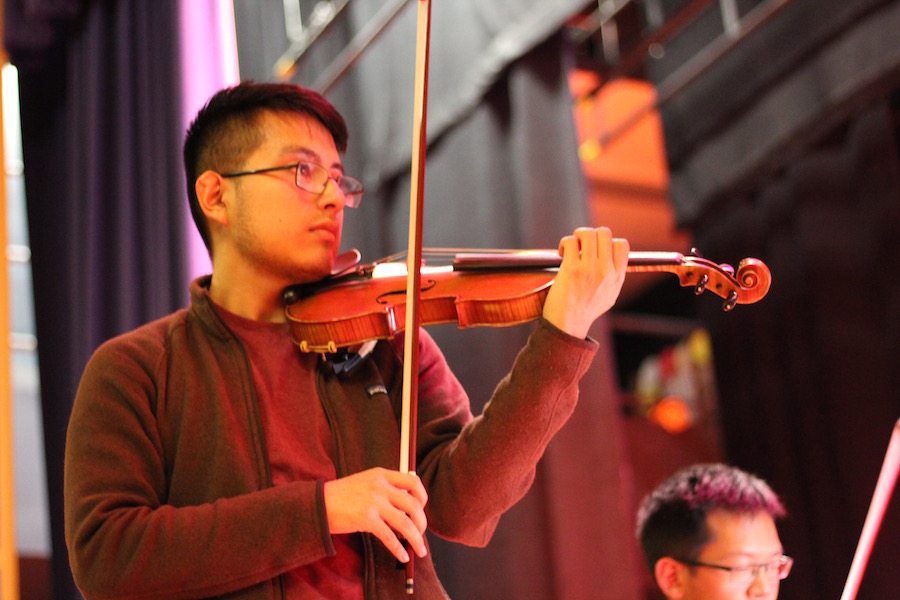 To its cries—quite controlled, after weeks of Baez’ practice—strings responded with a near-perfect kind mirror, sorrow sweeping through their every note. But just when it seemed that things were getting too sad to bear, oboe swept back in. The melody looped back, an ebbing and flowing tide with the sun breaking over it. Baez’ oboe was not a warbling, skittish songbird but a great, soaring thing that knew exactly where it was going.

During a rehearsal Tuesday night, Zunun and Yun also rehearsed their pieces, heading out before the NHCO took a deep dive into the Dvořák. Onstage, Zunun played with a gentle vigor, propping his violin between chin and shoulder during notes as if it had become another body part.

Yun took a different tack with Mozart's Clarinet Concerto in A Major, laying clarinet over the orchestra like mist on the mountains, propulsive but also slow and deliberate. As he drifted in and out, he bent back, as if he was surprised with the sheer force of his own instrument. 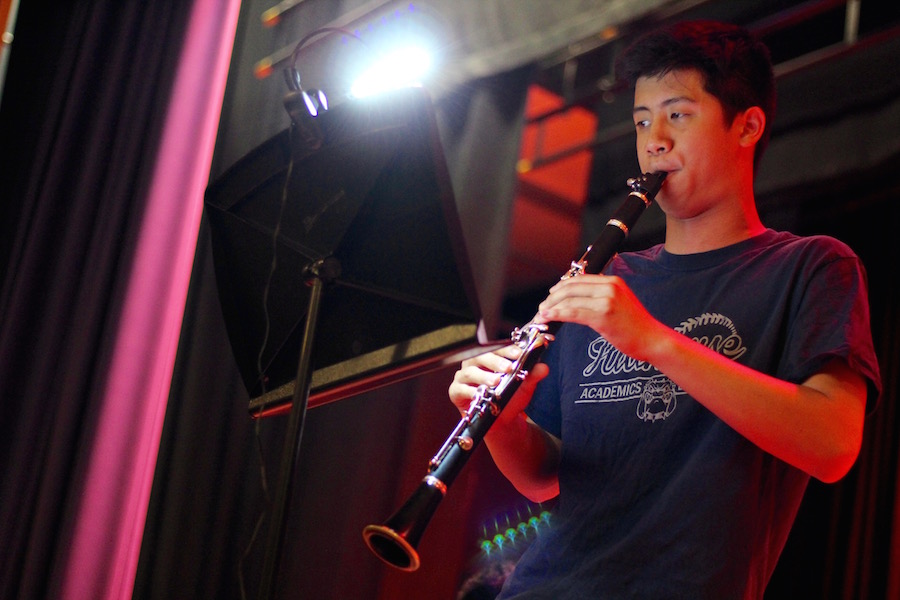 In a text message Thursday morning, he said he initially chose the clarinet because it was the coolest looking option in school band. That was in the third grade. Years later, the instrument has become part of his daily routine, which includes summers at the Morse Summer Music Academy.

“[It’s] exciting,” he said afterward. “I’ve never played that big of a solo before. I’ve learned how to lead in certain areas, how to always be listening, and to relax and really take over the performance. ”

The NHCO has been collaborating with students in the New Haven Public Schools for several years, a tradition that began when Wilbur Cross student Noel Mitchell (he is now finishing his freshman year at the University of Connecticut) took the stage to play Brahms with the group in 2015. It introduced a concerto component for New Haven high schoolers three years ago, opening it to middle school students this year.

“As a community orchestra, we want to include the community in as many ways as possible,” said Board President and violinist Jessica Sack at a rehearsal earlier this week. “And having young people as guest soloists seems like a wonderful continuation of having youth playing side by side with the orchestra.”

“We realized there’s such talent in the public schools, and we want to have the arts be part of their lives but also performing,” she continued. “For kids are learning a concerto or learning a piece that has the potential for accompaniment, it’s rare to have an opportunity to have an orchestra back you up. So it’s really exciting, I think, to have that experience.”

The NHCO performs this Saturday, May 11, at 2 p.m. at the Fair Haven School at 164 Grand Ave. The concert will also feature a book giveaway, with books donated by New Haven Reads and Board President Jessica Sack. Sack said the intention is for the books to build family libraries. More information is available here.