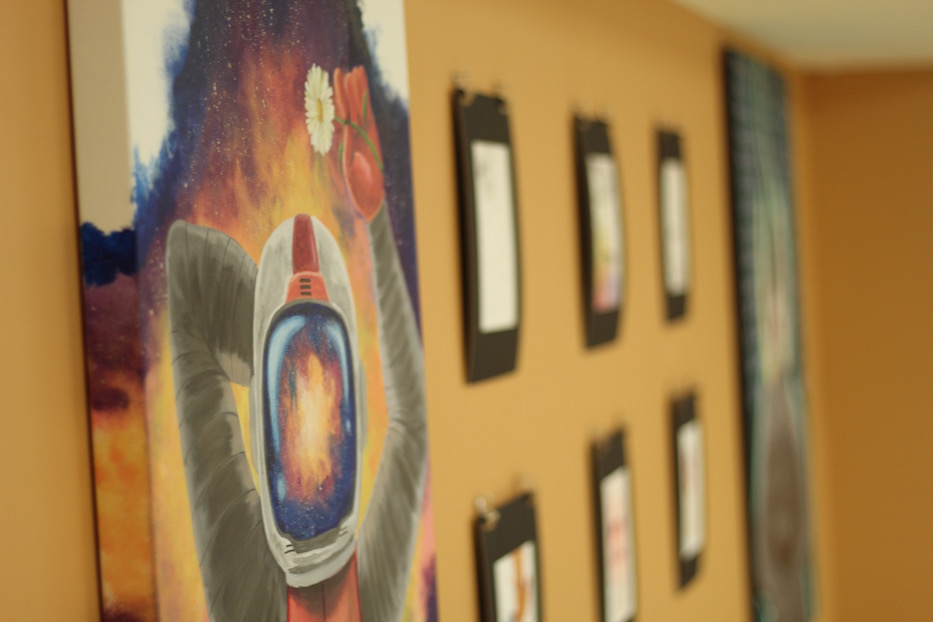 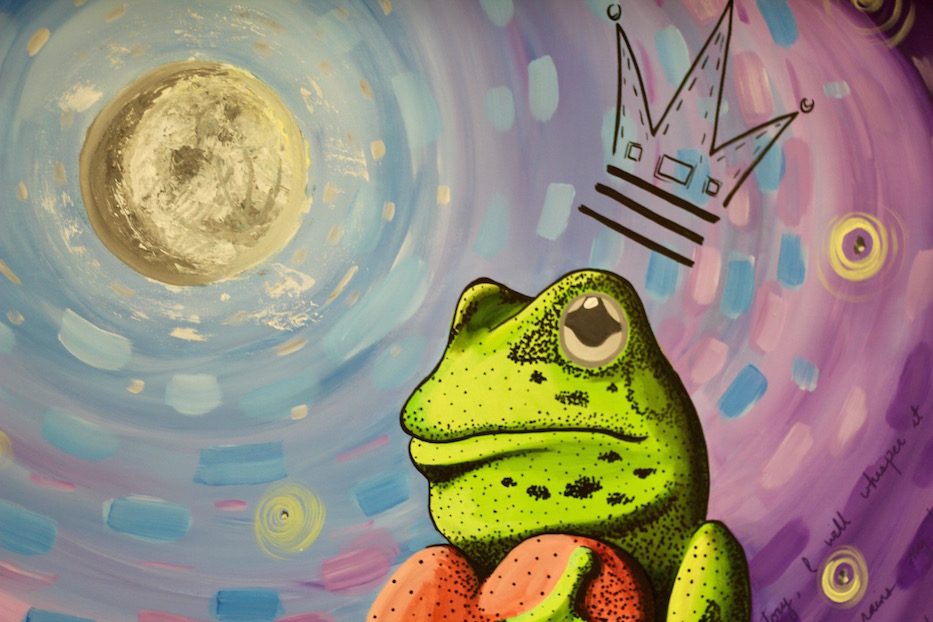 The frog looks out beyond the frame, clutching a big red heart to its chest. Over its right shoulder, the moon glows, a near-perfect orb of white light. Blue and pink streaks make their way through the night sky. Below, delicate text curls through a wash of purple studded with gold stars.

I will not bury my love story is one of almost 30 works in How To Spell, a one-woman show from artist Zulynette running at the New Haven Pride Center through Oct. 30. The exhibition, which combines painting, ritual drawing practice, and multimedia performance, opened as part of the space’s virtual PRIDE Week celebrations earlier this month. Several of the pieces are accompanied by QR codes that take viewers to online content, including video and poetry. It comes during both Connecticut's PRIDE month and Hispanic Heritage Month, which runs from Sept. 15 to Oct. 15.

“This show speaks to a cycle of identity reclamation,” the artist wrote in a statement for the show. “The cycle consists of challenging the stories fed to us—who we are, where we’re going, what we ought to be, a metaphorical death of a past identity, and a growing into a new form of being. The paintings that I have chosen for this show capture moments in time of taking back and defining my identities.” 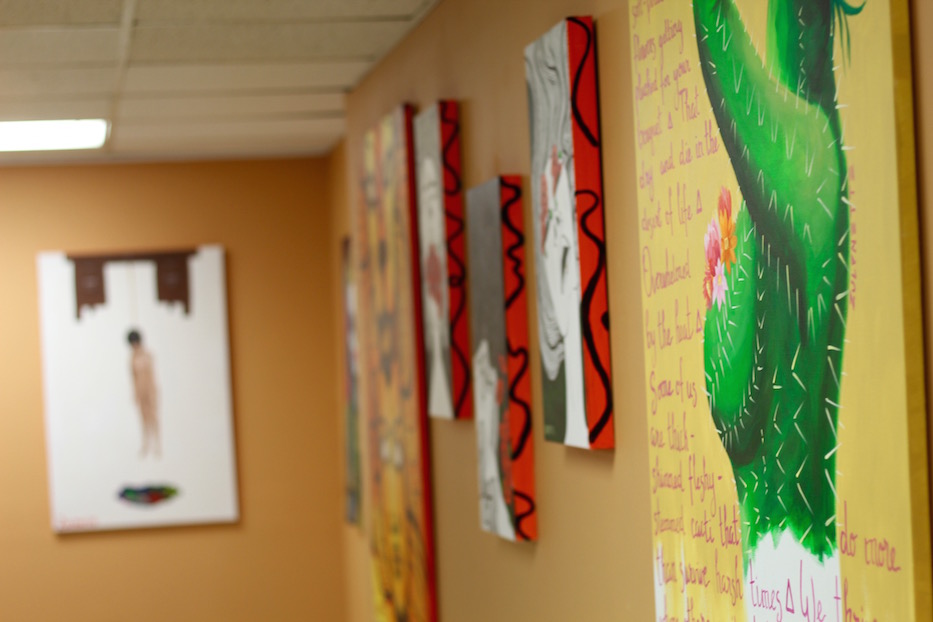 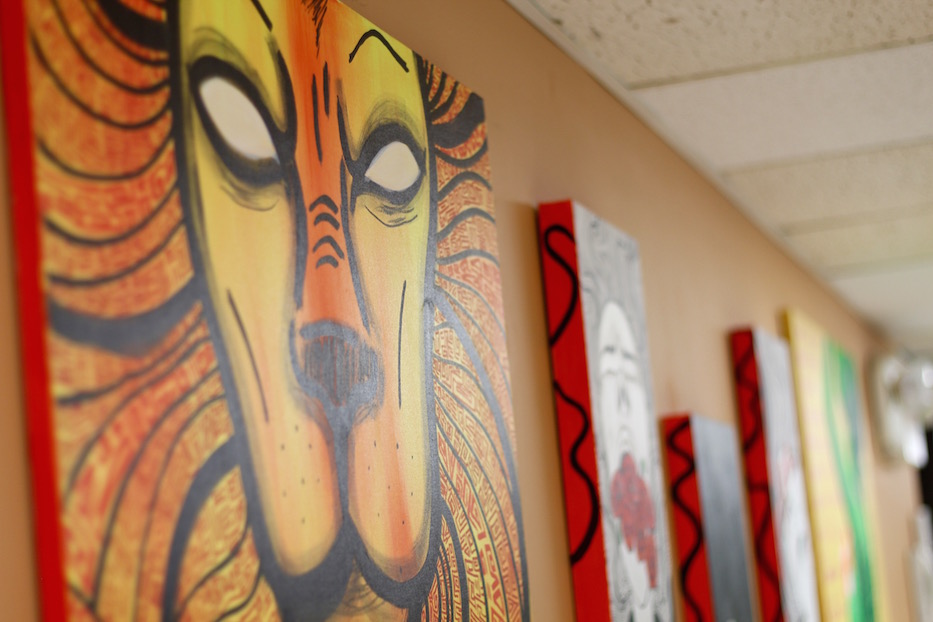 The title comes from the artist’s process: she refers to her pieces as “spells” in the magical sense of the word. Since January, she has been casting them daily with her "366 Challenge," an initiative to draw at least one piece per day for a year. They are installed in pairs and suites around the Orange Street gallery, telling a story of 2020 that transcends COVID-19 for alchemy, loss, humor and magical realism all in one place.

“I call my paintings spells, because I think of them as setting an intention for something,” she said in an artist’s talk earlier this month. “I see them as healing something, changing something, closing a chapter, finally.”

In the exhibition, the title holds both mystical and literary weight, with works that tilt heavily towards the poetic and the other-worldly. In one challenge drawing, a young child peers up at a rising black wave, its crest a black wolf’s head with glowing, glowering yellow eyes. Its ears are pressed back, the sign of imminent danger. The wolf opens its mouth, revealing fangs. Instead of fur, its body looks like a collection of thin black needles. 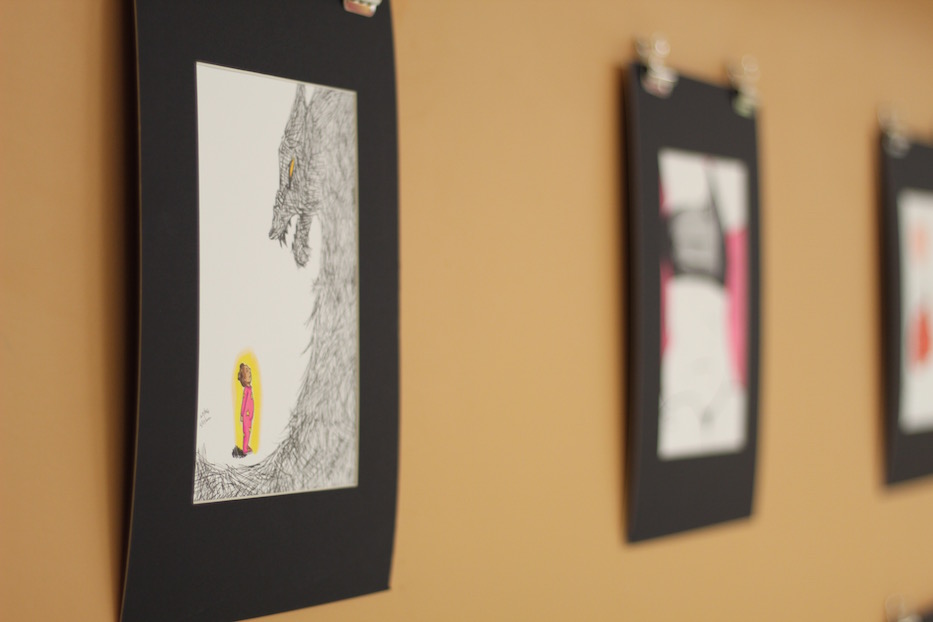 If the wave collapses, it will wash away the child with it. But she seems unfazed: she looks up at this monstrous shape with a sort of curious charm, a smile spreading across her face. An oval of light hangs around her little body. She wears red pajamas, as if this is a disrupted night terror and friendly bedtime story all rolled into one. There’s a sense of enchantment there, as if Zulynette has reimagined a better, braver Little Prince.

“I wanted to make her brave, because I think in one way or another, we are all adults recovering from our childhood,” she said in the artist’s talk. “And so, it’s like a healing piece for our inner child to be brave. That those shadows that we’re scared of, those monsters that we’re scared of, aren’t even real. Not only are they not real, but in them not being real, we can almost play with them.”

That message comes across in several of the works, as the artist moves through fear and expectation to acceptance and wonderment. Beneath the challenge drawing of the child, a woman turns away from a suite of bright balloons, each of them etched with a surefire sign of sexism and the gender binary. Tone policing, reads one. Fragile masculinity, reads another. The male gaze, reads a third.

She crosses her arms on a lipstick-red tank top. Prickly needles stick out from her skin, as if she is part-woman and part-cactus. She smiles, eyes closed, as one gets too close and explodes. Even among the balloons, she is sure and stunning, shoulders relaxed. This, maybe, is what it looks like to have the last laugh. After all, if the balloons get too close to her, they’ll pop. 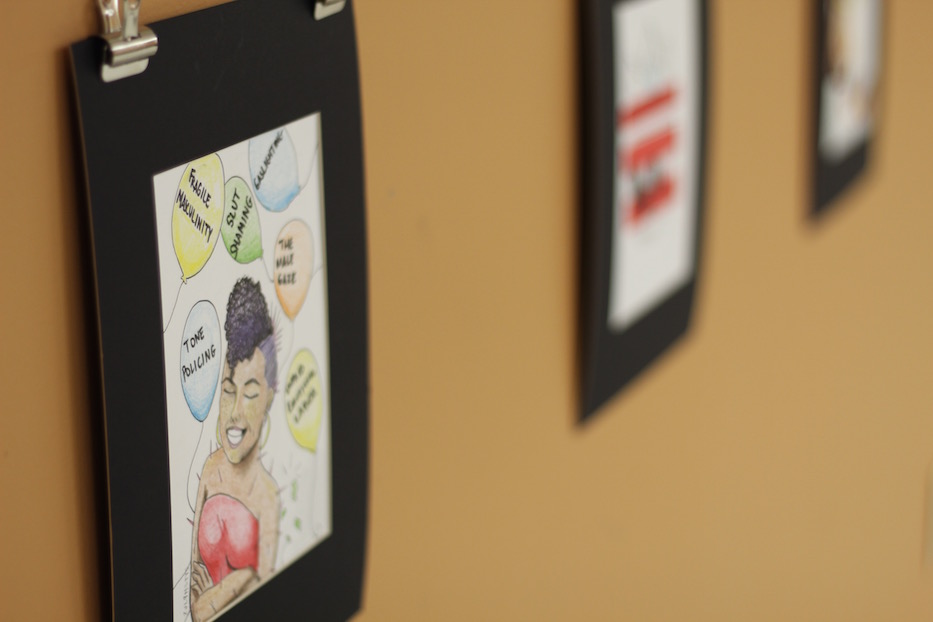 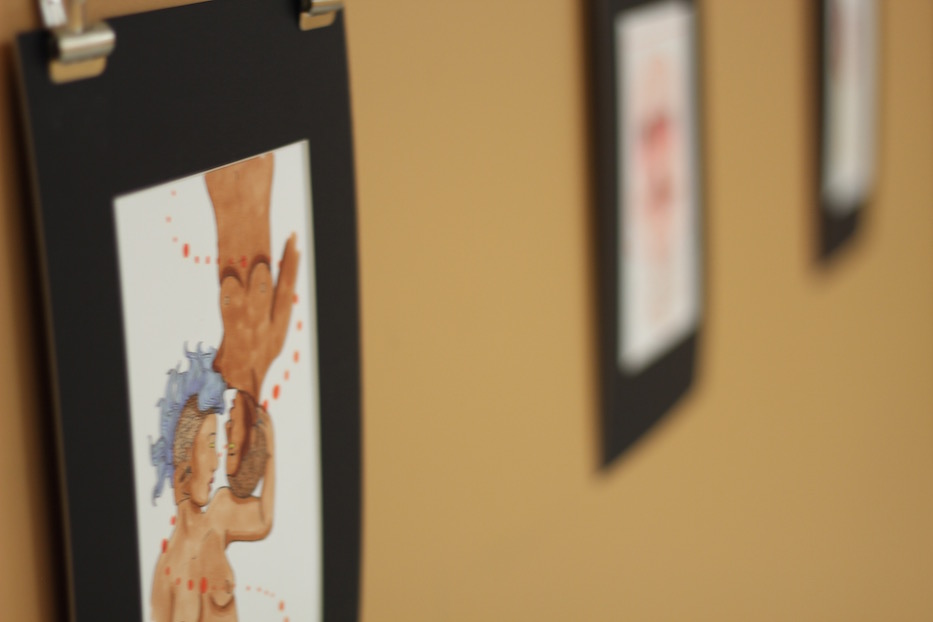 In some ways, it is very much a portrait of the artist for the moment in which she—and we the viewers, by extension—are living. Around the gallery, bodies have not been shamed into thinness. Figures have folds of fat, full, heavy breasts, stretch marks that spider-hop and skitter across skin. Roses, sprouting little green stems, spill from the wide open mouths and eye sockets of women who might be reprimanded in another world. Skin can be muscled, spiky, and gem-colored.

In reflecting the reality of her own body, and perhaps the bodies that she sees, the artist has done a great service to her viewers. Gone are the expectations of perky-breasted, waif-like women with milky skin. In this space, hair curls by its own volition (and probably grows in all the places that it should), spilling from some heads and half-buzzed on others. Curves are welcome and encouraged. The boundaries between masculine and feminine are porous, rather than hard.

Zulynette is not one to be quiet about the artistic power that she wields, and this show whispers and bubbles with that energy. It lives at her intersections, with nods to her Puerto Rican heritage, her queerness, and her own femme presentation and the bucked expectations that come with it. Several works weave in poetry, a reference to her family’s roots in Toa Alta, Puerto Rico, called “cradle of poets” by those who know it.

I will not bury my love story, for instance, speaks for itself—in scrolling text, the artist vows to tell her story boldly and without shame, pushing out the potential for homophobia instead of pushing silently through it. The frog is a blown-up version of el Coquí, the frog that has become a symbol of Puerto Rico ("Soy de aquí, como el coquí").

There’s an intimacy there, as if she has figured out a way to get close to the viewer in a time of social distancing. Frogs, space travelers, and prickly-skinned women look out onto the basement gallery with a sense of not-quite-settledness, as if they might break free from their canvases and gather in the empty space. A figurative elephant in the room becomes literal, raising its grey, weathered trunk in a thick sea of words.

Wordplay rises up to meet soft, firm skin in shades that range from paper white to coffee colored to Elphaba green. Hands and arms, severed from their bodies, hold out skulls in a reminder that this time—with the pieces, with the artist, with each other and with oneself—is both finite and an offering. 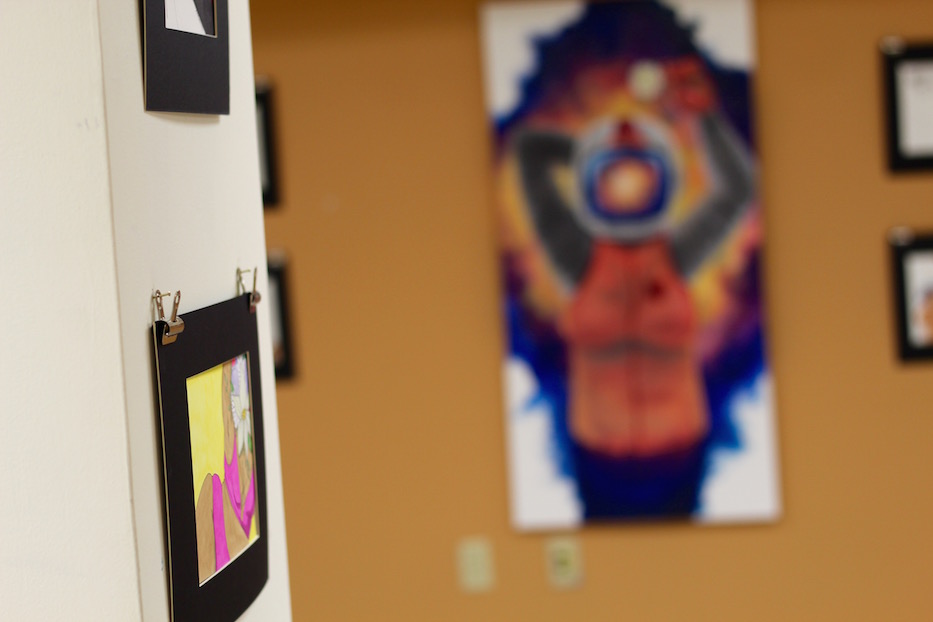 She has also left plenty of room for self-reflection and interpretation. In Surrender, an astronaut turns her helmeted head to the universe before her, a white flower clasped in her left hand. Her right arm folds behind her as she floats among the stars. The sky is an explosion of color: blooms of orange, purple and blue bleed into each other. They look like splattered paint.

Where the galaxy should be mirrored on her helmet, there’s the reflection of a body, floating in the same bloom of color that is behind her. A viewer starts to wonder: is her own body a mirror? Is there a fellow traveler out there, discovering the universe at the same time? The flower is a riff on the white flag that has become synonymous with truce. But what is she surrendering to?

Others are cheeky and acerbic, taking capitalism by the horns and shaking it hard. In Death By Desk (How To Kill An Artist), a figure hangs lifeless beneath a desk, dangling by a rope as a puddle of color collects below. From their hands, feet, and face, they drip red, green and blue.Their head looks to the floor, still shedding red tears.

If the work is macabre, it’s also overdue, tackling a system in which creatives must take a paper-pushing hustle to financially support themselves. It feels fitting beside Queen Death, which Zulynette began during a live painting demonstration last year. In the piece, a stiff, green trench coat rises around a crowned skull, rendered in white and grey against a blood red background. 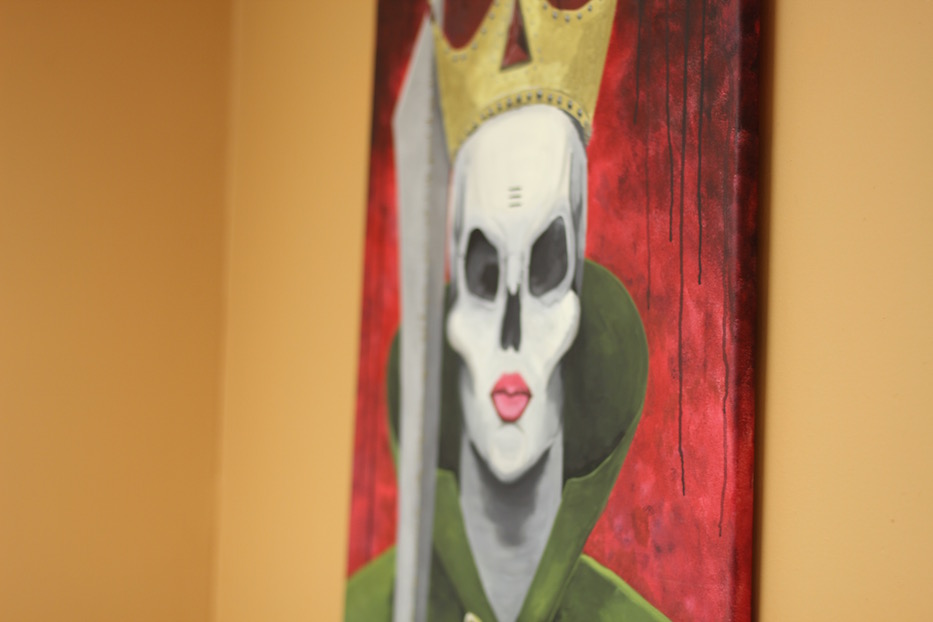 Paint drips behind her. Black, cavernous space greets the viewer where her eyes and nose should be. She’s a little like Voldemort, if Voldemort were also starkly beautiful. But the piece is also funny: Queen Death has made time for lipstick. She looks good. In her right hand, she holds up a sword, ready to slice the living from the dead.

“I was thinking of those current themes in my life of being challenged, of going through identity transformation, which is why a lot of the pieces are skulls and representative of death,” she said. “For me, death is a metaphor. It is a metaphor for us taking death in our own hands, and enacting it in our own lives, so that we can create space for new things to grow.”

“That’s where the magical part comes in,” she later added. “It’s getting from where to be to where you want to go.”

How To Spell runs at the New Haven Pride Center through Oct. 30. The exhibition is available online or in-person by appointment. Per COVID-19 regulations, all visitors must wear masks and practice social distancing. Visit the Pride Center’s website for more information