PRIDE Week Serves Up Storytelling In The Kitchen

The night began with Sonia Salazar preparing a Moscow Martini; it was Martini Tuesday after all. As she poured four shots of vodka from a rainbow-themed bottle, she told the story of her mother and grandmother putting on makeup and heels to cook and drink. She does not put on makeup, she said—but she does like an excuse to drink.

She announced that she was going to cook just like her family does in Colombia—with a lot of laughter and fun. Water, flour, mozzarella, and seven minutes was all she needed.

This past Tuesday, Barracuda Bistro and Te Amo Tequila owner Salazar discussed running an LGBTQ-owned and operated restaurant as part of this year’s virtual PRIDE New Haven. She was joined by Women’s Program Officer Miranda Rector and Latinx Program Officer Max Cisneros. The program, during which she made Colombian arepas, was streamed on Facebook Live. It also falls during the first week of Hispanic Heritage Month, which she is also celebrating.

After taking a sip of her drink, Salazar told the story of how she got into the restaurant business. In Colombia, she had originally studied to become a nurse but knew it wasn’t her true passion.

At age 18, she emigrated from Barranquilla, Colombia to Stamford. Her first job was at Hyatt Hotel’s salad station in Greenwich. She spoke fondly of her five years there, but knew she didn’t want to work under someone for the rest of her life. 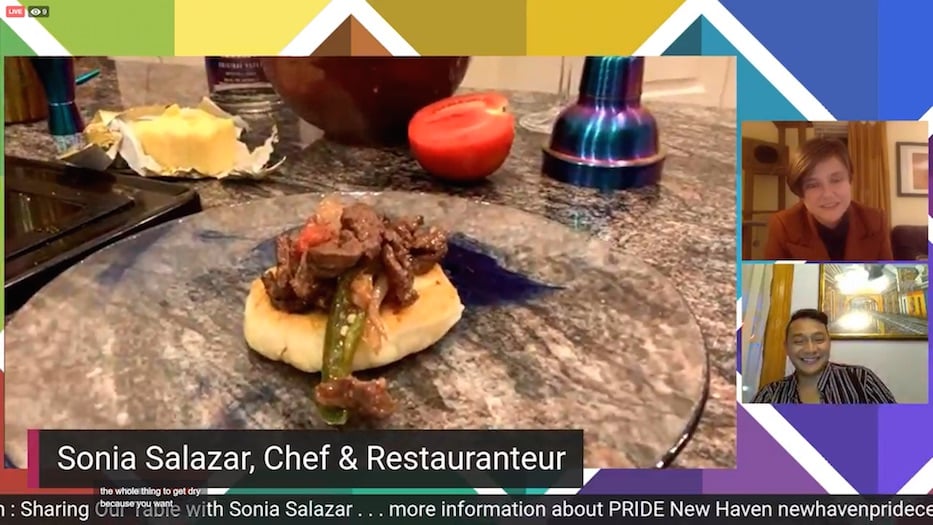 She continued working across the state in other restaurants, including Union League Cafe for two years, until she opened Baracuda in 2015. Three years later, she went on to open Te Amo Tequila on Temple Street.

“I always wanted to cook my own recipes,” she said. “When you cook for someone else you have to cook their recipes. I was going to be the boss.”

In her journey to becoming her own boss, she encountered people who underestimated her for being an immigrant Latina woman. Her English proficiency was often questioned as a way to demean her and her skills.

“No one knows if you speak English or not.” she said. “So even when I would hear them talking about me, and trying to make me feel dumb … I never let no one let me down.”

Cisneros brought up the importance of having Queer Latinx representation in the restaurant industry, which is traditionally a white, male-dominated space. When he first moved to New Haven, he found a great comfort in people pointing to Barracuda and later Te Amo Tequila as queer-owned spaces.

“The image of a strong Latinx woman being in the position that you are, is significant for a lot of folks to understand that this can happen to you too,” he said.

Salazar said she finds joy in cooking food that is familiar to people from across various backgrounds, and giving them a taste of home or as close to home as she can.

“The smells of moms and grandmas cooking make them feel at home,” she said. “I hear that all the time at Barracuda. I love that I make other people feel that way with food.”

She herself has been trying to replicate her mother’s sancocho recipe. Sancocho is a traditional chicken, beef, and potato stew. For years, she has never been able to get the recipe quite right.

“Nothing tastes like hers,” she said. “It is that something you can’t identify. You just feel it.”

She scooped up a handful of dough and quickly molded it into a sphere. She then flattened it into a thick disc. She carefully pressed the sides with the inside of her middle finger to smooth them out. She sometimes worked the dough without even looking at it, relying on muscle memory.

At one point during the livestream, she prepared toppings for the arepa: beef, finely diced and sautéd onion, chopped tomato. At another, a hand suddenly dragged the plate of arepas off screen. Salazar’s wife and Te Amo co-owner Deirdre Rifenburgh, was the culprit. Salazar laughed and talked about planning their pregnancy and looking forward to cooking for even an even bigger family.

Towards the end of the talk, Cisneros and Rector discussed how food can be a highly political issue in queer spaces, especially those with limited resources and access to healthy affordable food.

“A lot of people may feel powerless whether it is the environment or political process but what you eat and decide to put in your body gives you power,” Cisneros said. “I think a lot of people can tap into that power through food, especially queer people”

Rector discussed the center’s 15-week food distribution program which ran from late May through August. The center provided more than 45,000 pounds of fresh produce, dairy, bread, and grains to people with food insecurity. The program will be pivoting into a food pantry model for the fall and winter months.

Rector, who grew up in California, recalled growing up on a tight budget. Their mother bought groceries at the 99 Cents Only Stores and worked extra hard to make sure the food tasted the best it could.

“Once we were able to be more stable and put in the effort to teach me how to cook and take care of myself, they said. “ And not have to have those microwave meals anymore.”

Salazar encouraged people to experiment making arepas and find what best suits their needs whether it be beef, butter, or jam. All they need is seven minutes and some creativity.