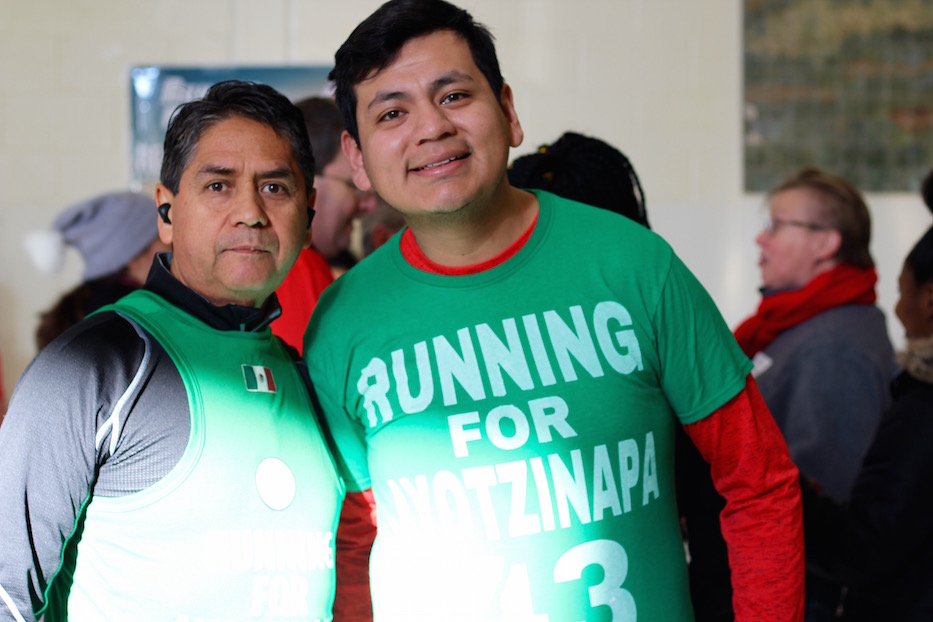 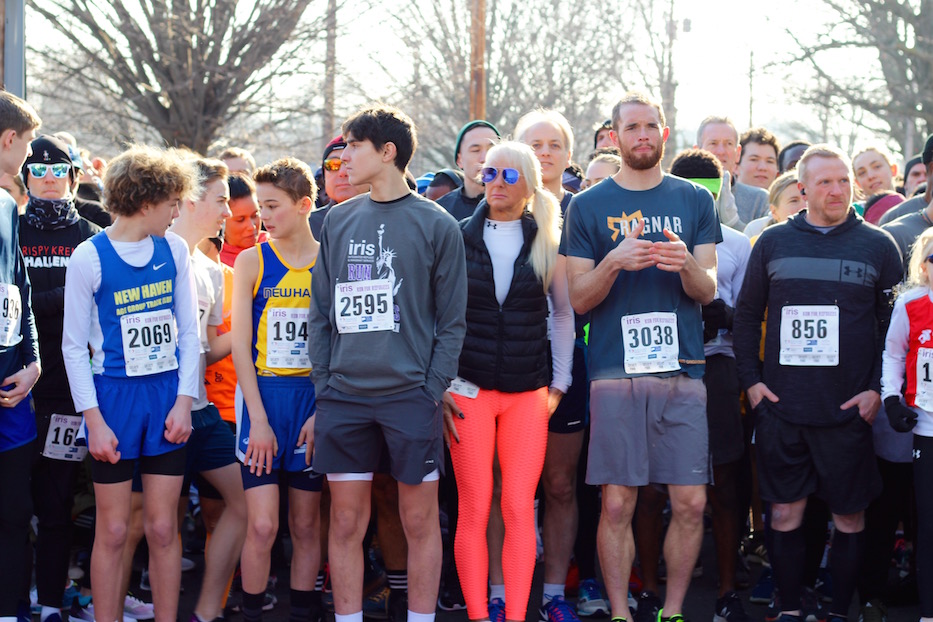 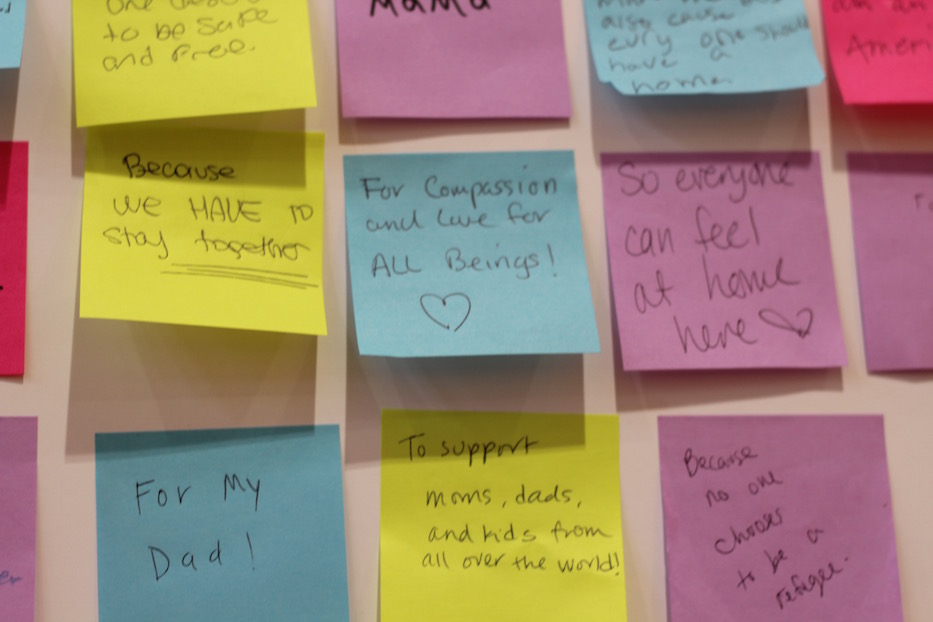 Thousands of runners were ready to send a message straight to Washington. Strains of Emma Lazarus’ “New Colossus” coasted over the crowd, then faded. Bodies stood at the starting line, pressed shoulder to shoulder. And then, on a single count, they exploded into motion.

Sunday morning, over 3,000 runners, walkers, toddlers and babes-in-strollers turned out for the 13th annual Run for Refugees, a 5K hosted by Integrated Refugee and Immigrant Services (IRIS) to support the organization. The race began at Wilbur Cross High School and wound its way through East Rock Park and the surrounding neighborhood.

As of Sunday afternoon, IRIS Director Chris George said the organization had raised close to $200,000 for the event. The number of registrants also marked a record high.

In part, that money will go towards work that IRIS has started doing with undocumented immigrants and asylum seekers coming from the U.S.-Mexico border, for which the organization receives no federal funding. 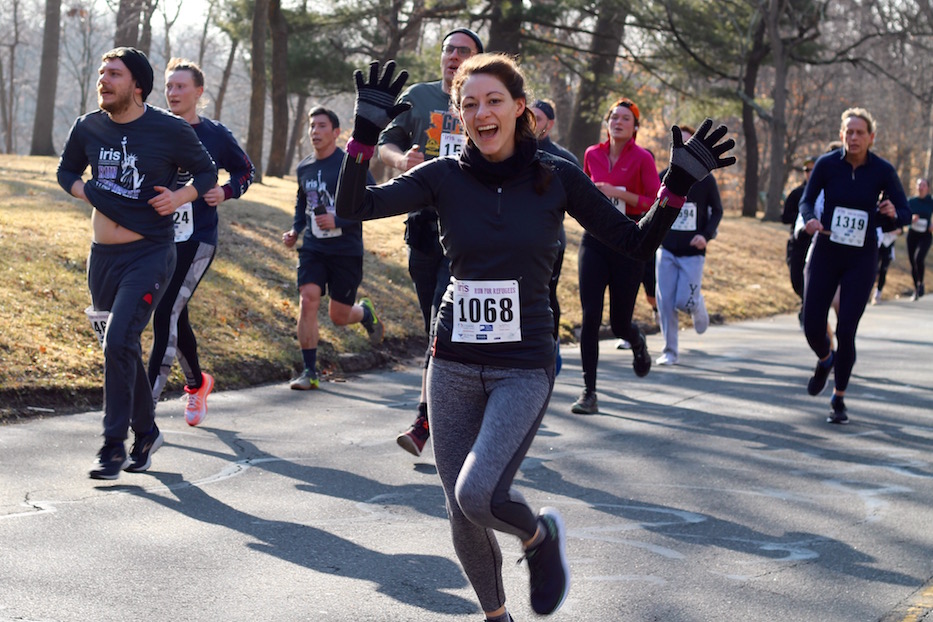 “We are sending a message across the country, maybe directed towards Washington more than anywhere else, that says we are a welcoming nation,” George said at the beginning of the race. The crowd cheered as runners bounced from foot to foot to stay warm.

Behind a starting line that stretched for blocks, runners got ready to pound that message into the pavement. At 94 years old, Herman Bershtein dedicated his 13th race (a brisk 24 minutes and 20 seconds) to his parents, both immigrants who met after arriving at Ellis Island in 1913. Bershtein’s father was Russian.

His mother was Polish. If they hadn’t been granted entry into the U.S., his story wouldn’t exist.

“That’s the purpose of the race,” he said. “I do it for the immigrants.”

Closeby in the pack, activists-turned-runners Jesus Abraham Morales Sánchez and Patricio Ponce were running for the 43 students from Ayotzinapa Rural Teachers' College who never came home, and are still missing over five years after their initial kidnapping.

As he suited up before the race, Morales Sánchez said that he sees a strong connection between those students and the refugees, immigrants, and asylum seekers who are denied safe passage because of state-imposed borders. Both he and Ponce are members of the eponymous running club in New York.

“This is state violence,” he said. “Violence inflicted on the people from the government. That is the main reason that people are leaving their homes to come here, and the reason people struggle [when they are kept out]. We’re all connected. We’re all just trying to provide for a better future.” 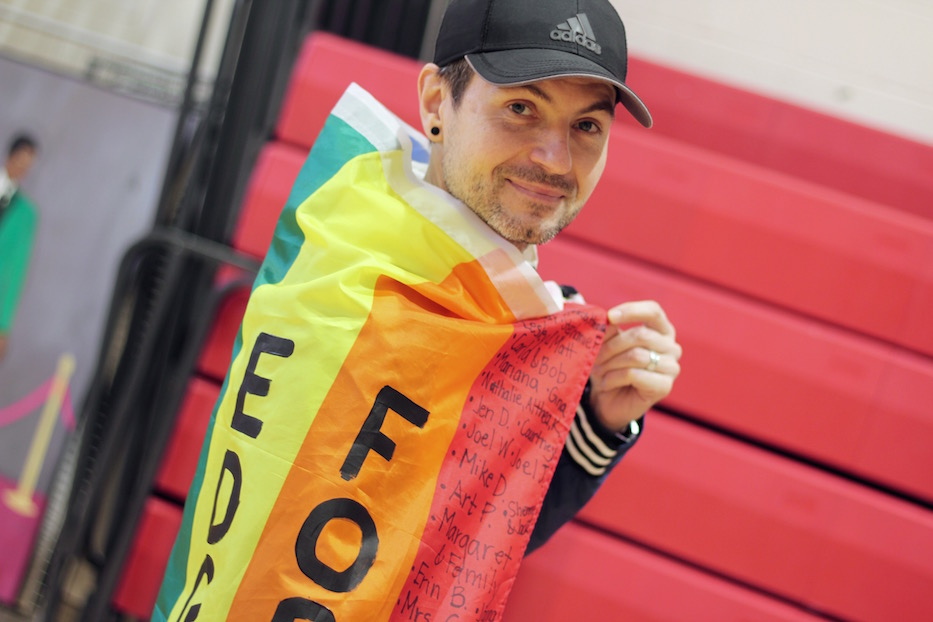 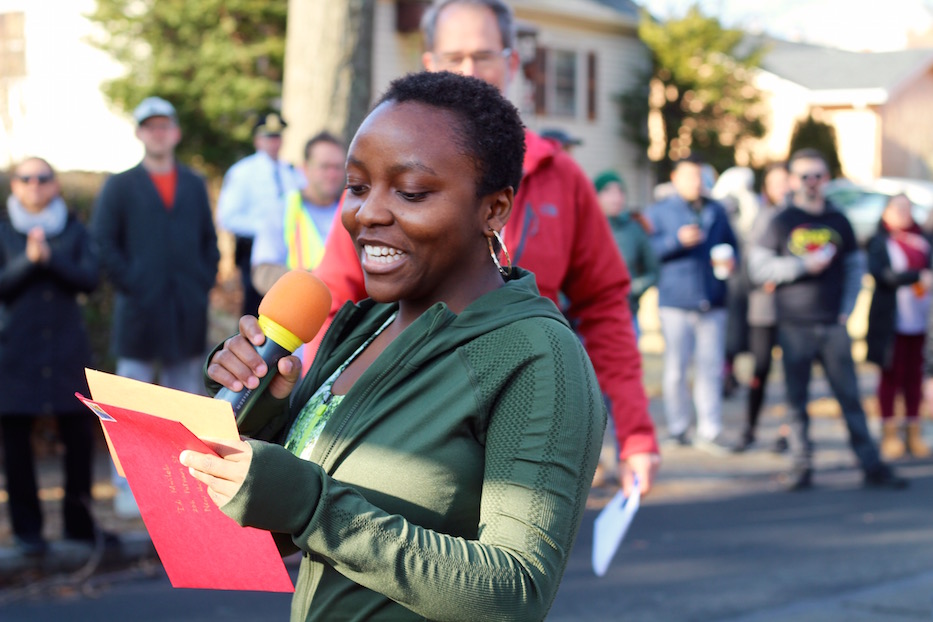 At the front of the crowd, Gladys Mwilelo added that she runs for herself—and for every refugee she has met during her own journey. Seven years ago, her family arrived in New Haven after fleeing the Democratic Republic of Congo and spending years in a refugee camp in Burundi. As a new U.S. citizen, she said that “my hope for the world is not to turn people into refugees anymore.”

“Refugees don’t choose to leave their homes, but they are pushed away from their countries,” she said. “As an American, my hope is to run and walk in solidarity with each and every one of you today.”

As runners filled in the starting line, a number of speakers echoed that message. Mayor Justin Elicker, who has run the race for several years, promised the crowd that his administration will continue to fight for immigrants and refugees, noting that “we continue that spirit of making sure that people that are struggling around the world have a home in New Haven.” 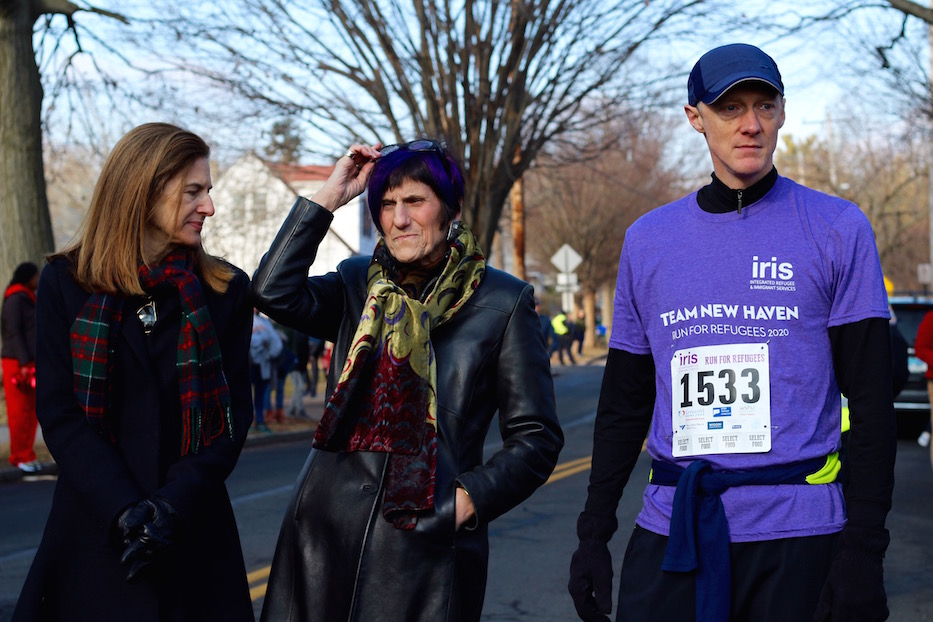 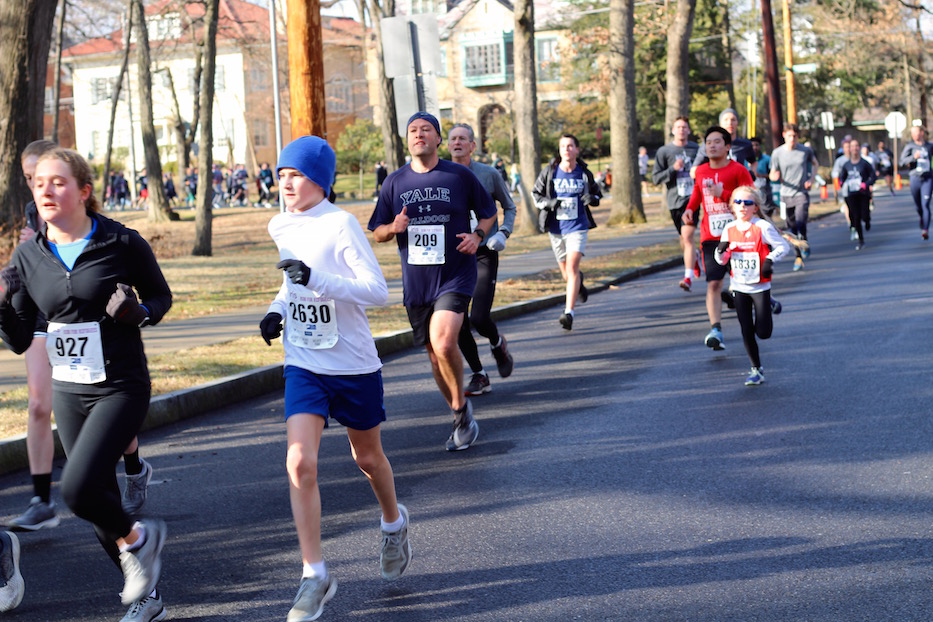 U.S. Rep. Rosa DeLauro recalled a recent trip to Brownsville, Texas, during which she crossed over into Matamoros, Mexico to visit a refugee camp where thousands of asylum seekers are living. She saw immigrants bathing in the Rio Grande and struck by disease. She saw a place with almost no healthcare available and very little food.

“It's got to stop,” she said. “We need to fight, and fight like you know what. And fight the folks in Washington and tell the president it is unacceptable. Stand with refugees. Stand with immigrants. Stand for the right thing to do.”

“It's a new horror every single day,” she added. “This is the fight for the soul of the nation.”

U.S. Sen. Richard Blumenthal added that it comes at a critical time to support immigrants and refugees. Last September, the Trump administration announced a cap of 18,000 refugees in 2020, down from 30,000 in 2019 and 50,000 the year before that. By December, state leaders were given the chance to opt out of accepting refugees in their state for the first time in U.S. history. 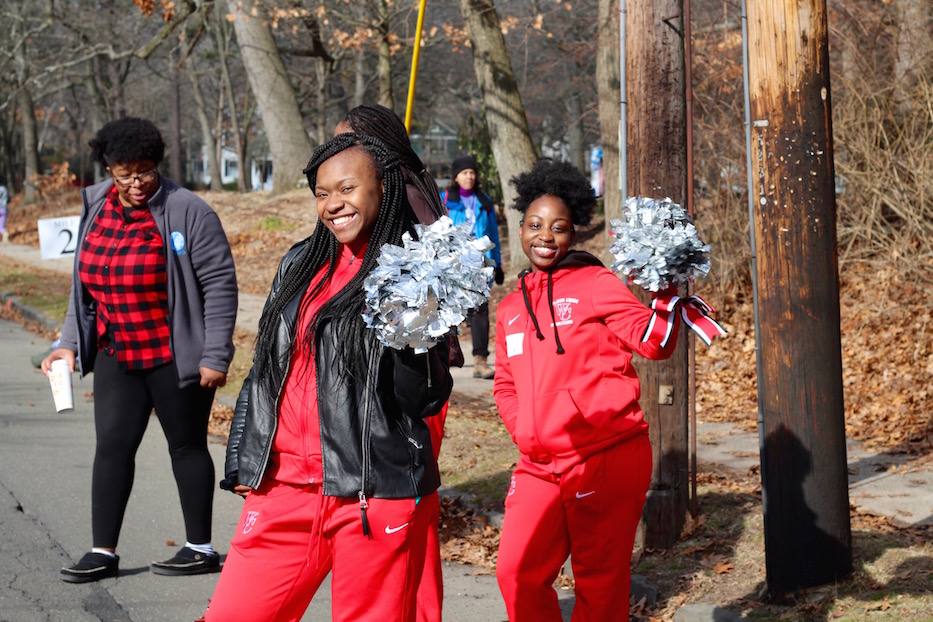 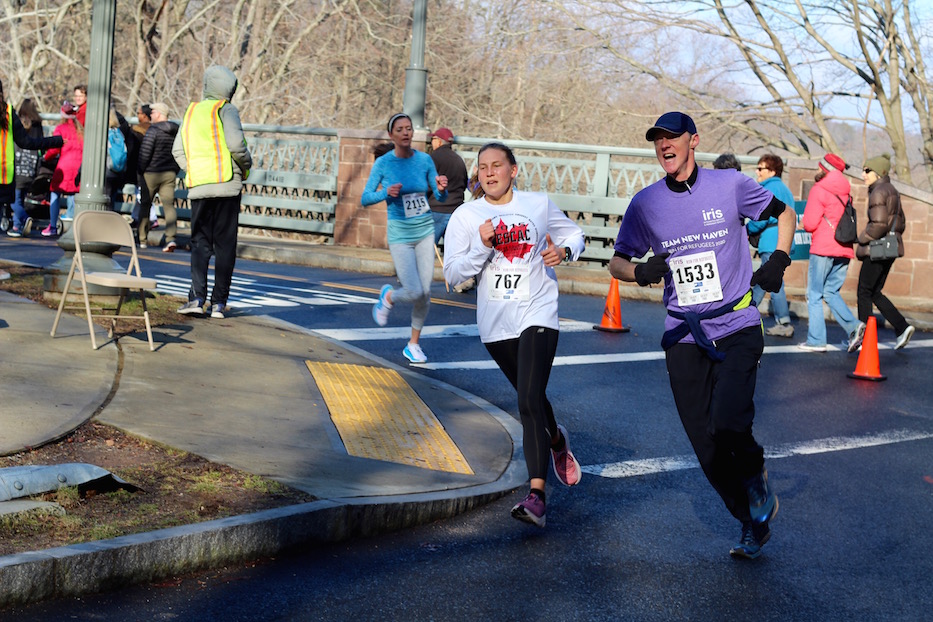 Then last month, the Trump administration expanded its travel ban (often referred to as a backdoor Muslim ban) to residents of Myanmar, Eritrea, Kyrgyzstan, Nigeria, Sudan, and Tanzania. At the same time, IRIS has expanded its work with Junta for Progressive Action, none of which receives federal funding.

As they performed Irving Berlin’s arrangement of Lazarus’ “The New Colossus” (click on the video below to hear it), members of the Yale Gospel Choir brought the message home. The words swelled over the crowd, as timely Sunday as they were when they were inscribed on the Statue of Liberty in 1903.

“It’s really special for us because members of the gospel choir are from around the country and around the world,” said Kianna Pierson, a Yale senior who is the choir’s musical director. 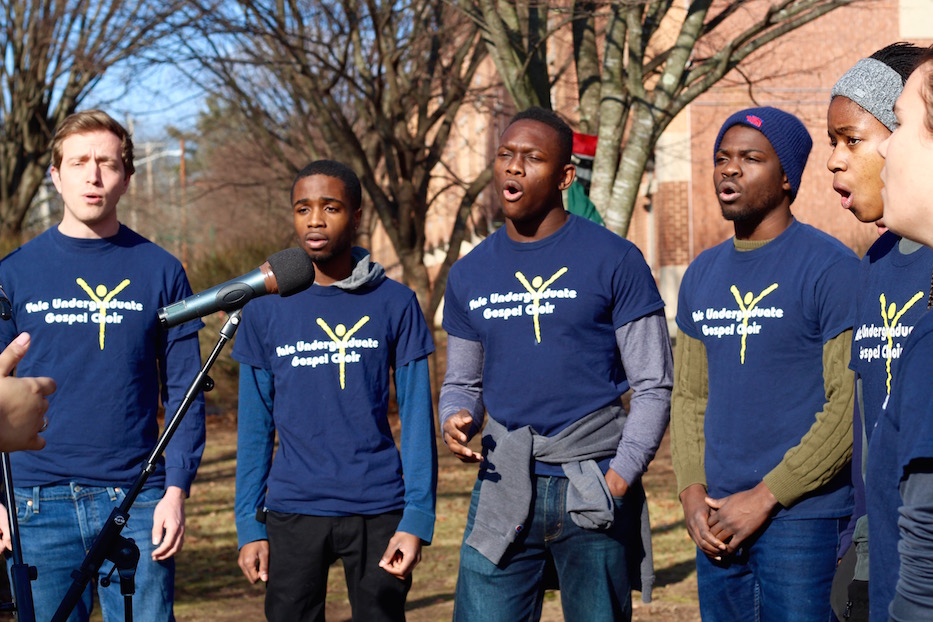 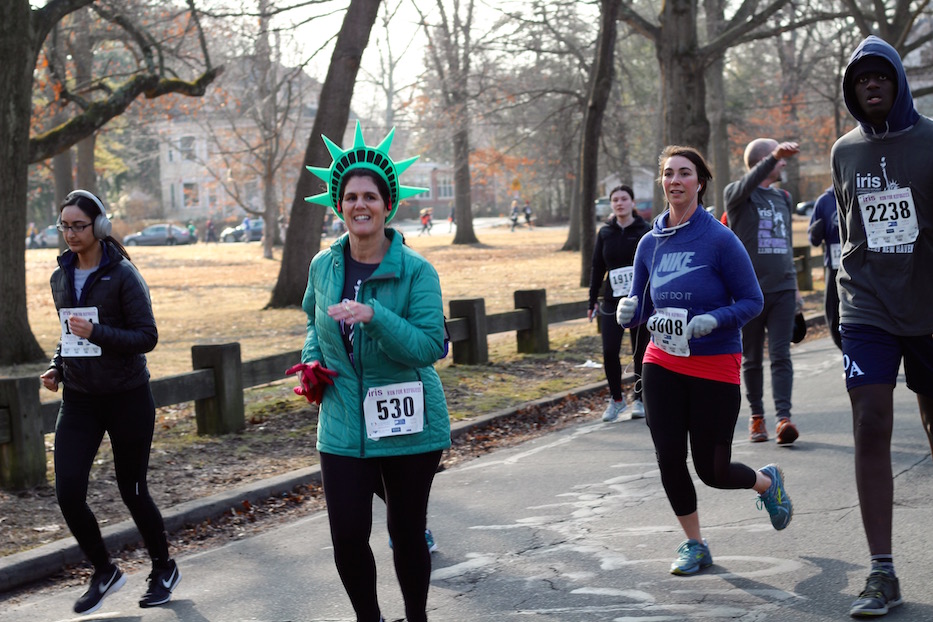 As they ran, runners seemed to strain against all of it. Many turned out in costumes, with at least two Lady Liberties, one Elsa from Frozen, and a sprightly pineapple in the mix. Others raced by with single and double strollers, balloons, and pint-sized fairy wings. Just a little over an hour separated the first person to cross the finish line from the last.

Back inside Wilbur Cross’ gymnasium, 20-year-old Noor Roomi was decompressing from the run with two nieces she had brought along. After coming to the U.S. from Iraq several years ago, she said that she runs to honor and support other refugees like herself. Since resettling in New Haven, she has gone on to study biology at Gateway Community College, after which she hopes to go into the medical field.

“I want to give back to the community,” she said.

To watch more from the beginning of the race, click on the video below.