A People United Land At The Pride Center 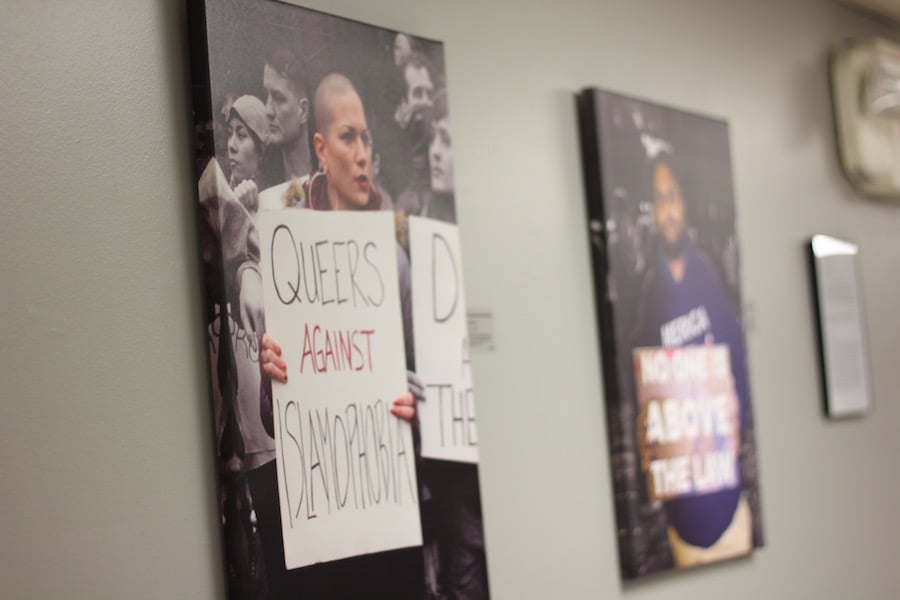 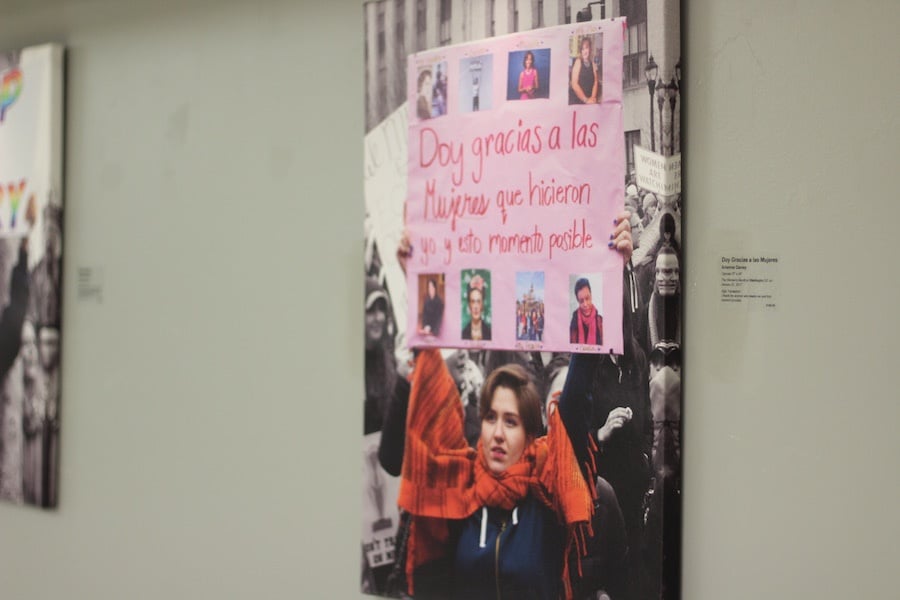 A woman lifts a sign high over her head, brilliant pink against a black-and-white background. Below, her lips are halfway open, an orange scarf lifting with her shoulders. Her hair falls around her face. From the sign, Justice Sonia Sotomayor winks out beside Frida Kahlo, Claudia Rankine, and members of the woman’s family. Doy gracias a las Mujeres que hicieron yo y esto moment posible, it reads. I thank the women who made me and this moment possible.

She—and so many others—are part of Arienne Davey’s The Art Of Protest, running now through Jan. 31 at the New Haven Pride Center’s art gallery downtown. Set between Washington, D.C, and Connecticut, the exhibition pulls images from Donald Trump’s 2017 inauguration, the first annual Women’s March in Washington, and this year’s March For Our Lives in Hartford.

“In my artist’s statement I have a quote from César Chávez saying ‘the people united will never be defeated (El pueblo unido jamás será vencido),’’” said Davey at an opening Monday night. “That’s what these protests are. They’re people all uniting together for this one purpose. Or many purposes, but it’s one in general—equality and justice and love and peace and all of that, which apparently are bad words now.” 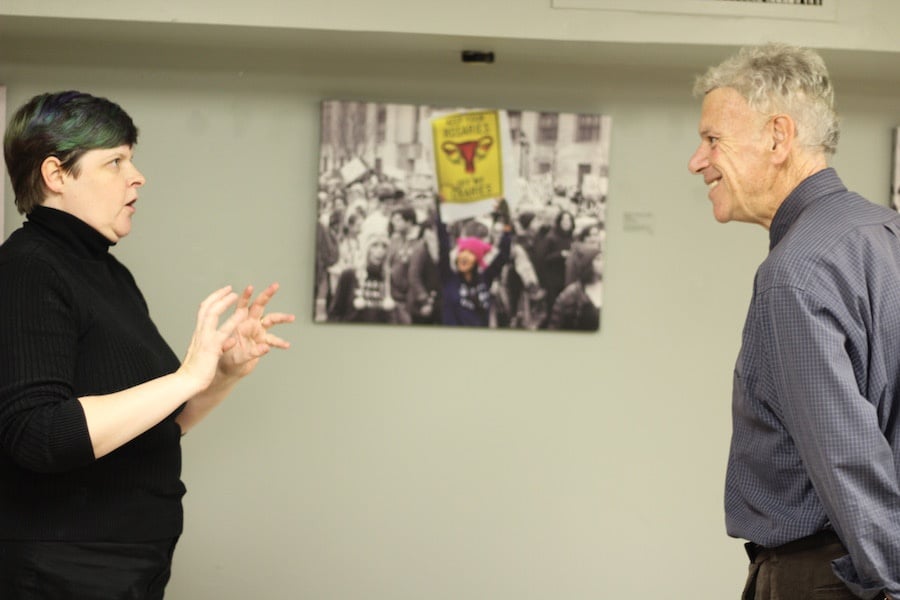 The artist, who is now 45, started taking photographs decades ago, when she was in middle school. But she first became interested in documenting political moments during Barack Obama’s 2009 inauguration, as she followed the then-president-elect’s journey into D.C., and then documented inaugural festivities despite subzero temperatures. It was so cold, she recalled, that her feet and hands froze through multiple pairs of socks and gloves.

And yet, nothing could keep her from staying on those streets until the parade was over, and some 1.8 million attendees had returned to their hotels, homes, and friend’s houses for the night night. Before Obama was elected, Davey had read Dreams Of My Father and was moved profoundly by what the Illinois senator had to say. There was sheer joy everywhere she turned, she said.

“It was a little overshadowed by Prop 8, but most of the country was just extremely happy,” she recalled.

So when Donald Trump—or “Trumpelmort,” as she called him—was elected in 2016, she knew that she wanted to go back to D.C., to document crowds on both sides of the political aisle as they streamed into the city. Originally, Davey had planned to go into the inaugural ceremonies. She said that she’d tried to “blend in” to seem inoffensive to both Democrats and Republicans, covering up some of her identity as a queer woman in the process.

But when she arrived, she was more interested in the crowds protesting outside the gated-off area where the ceremony was taking places. She managed to find a pile of folding chairs, climbed on top of one, and started taking photos. The next day, she pulled to the side of the Women’s March as millions passed, and took the same approach. 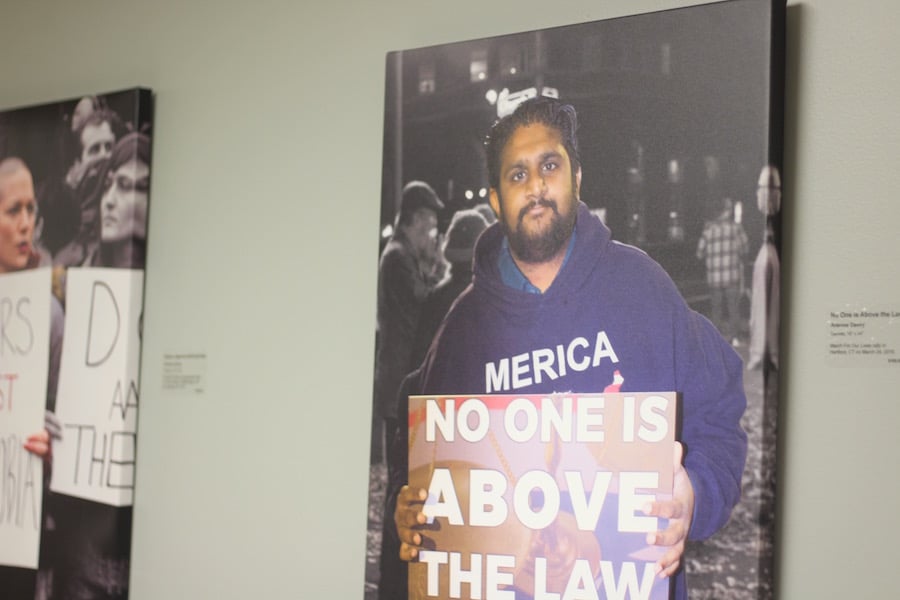 Now, those images wrap around the pride center, popping out from the walls with slogans like “Keep Your Policies/Off My Ovaries” and “No One Is Above The Law.” In each, one person stands out in color in the foreground, thick and thinning crowds turned to monochrome behind them. A soundtrack of audio from the Women’s March and last month’s “Protect Mueller” protest on the New Haven Green.

In one, a man in a puffy red-orange coat raises his right arm, head turned toward something beyond the frame that we can’t see. Behind him, it’s as if the hands of a historical clock have been turned back, the city soaked in sepia. He lifts a homemade signs that urges Please Learn Empathy as more of a prayer than a command.

Or another, taken just outside a barricade during that first inaugural weekend (Trump’s inauguration took place on a Friday and the Women’s March was that Saturday). She’s in a leather jacket, a big wool scarf fixed around her neck. Hair slips past her shoulders and ribcage as she lifts her arms, chained, above her head. “Fuck Trump,” reads a thick, shining piece of duct tape fixed over her lips. 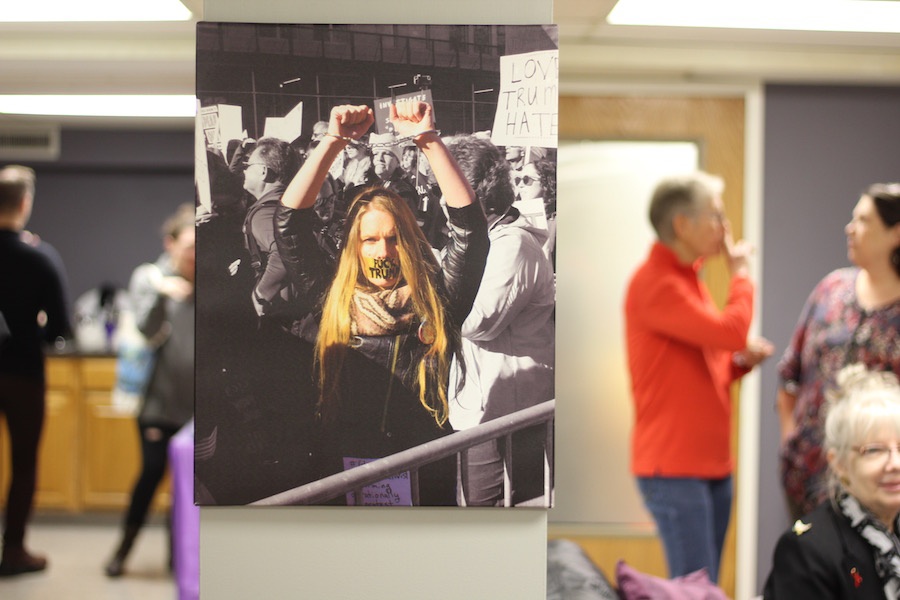 There’s a sense, immediate and lasting, that we’ve been here before too many times. And that we’ll return to the same spot as long as it takes. As she photographed, Davey said she was moved by several of the protestors that she saw, including fellow queer women as well as every nationality she could have imagined.

On the heels of a major boost in funding for next year, Pride Center Director Patrick Dunn said that he’s particularly excited for the exhibition, which will stay up through the third national Women’s March next January, because it takes the discussion of documenting protest, and opens it further to a queer, female lens. Thats not one audiences see enough of, he suggested.

“The idea of protest and the idea of pushing back is vital part of the LGBTQ+ community,” he said, noting six LGBT rights cases that are currently pending before the Supreme Court. “Think about Stonewall. The first ‘pride parades’ weren’t pride parades. The first pride parades were protests.”