A “People’s Menorah” For Peace 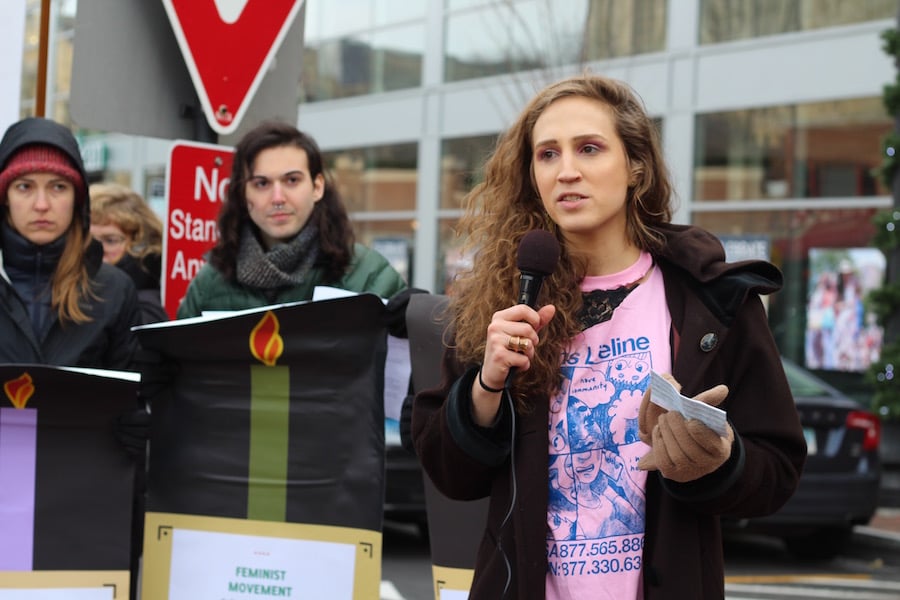 Mic in hand on Broadway Avenue, Mikveh Warshaw was ready to light candles for the final night of Hanukkah. She traveled from one to the next, one hand gloved while the other held steady by the orange flames. People held up the candles in front of her, with text large enough to read.

And the Shamash, the largest flame, for an end to militarized police violence in New Haven, in Israel, and around the world. 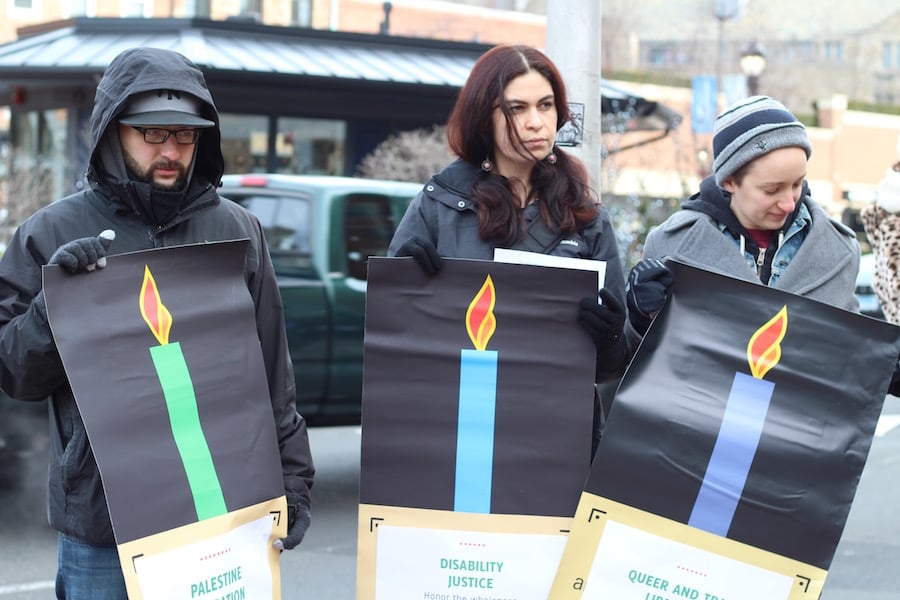 Sunday afternoon, Warshaw was one of several organizers of “Safety Through Solidarity,” an end-of-Hanukkah action and ritual to promote solidarity across social justice movements, light a “people’s menorah” on Broadway Avenue, and join a national campaign to "End The #DeadlyExchange" between the Anti-Defamation League (ADL), U.S. law enforcement officials, and Israeli National Police.

Close to 25 attended the action, a collaboration between Jewish Voices for Peace (JVP) and New Haven’s nascent Mending Minyan with additional speakers from the Party for Socialism and Liberation (PSL), Sex Workers and Allies Network (SWAN), People Against Police Brutality, ANSWER Coalition, and Housing Not Jails, which is preparing for a rally and march on Dec. 17.

“There’s two main miracles that I want to talk about,” said Warshaw as attendees trickled in, some in heavy coats and with extra pairs of mittens. “One is the miracle of victory after insurmountable, impossible odds, and the other is abundance through scarcity. This story tells us that there’s a hope, that there’s a possible victory.” 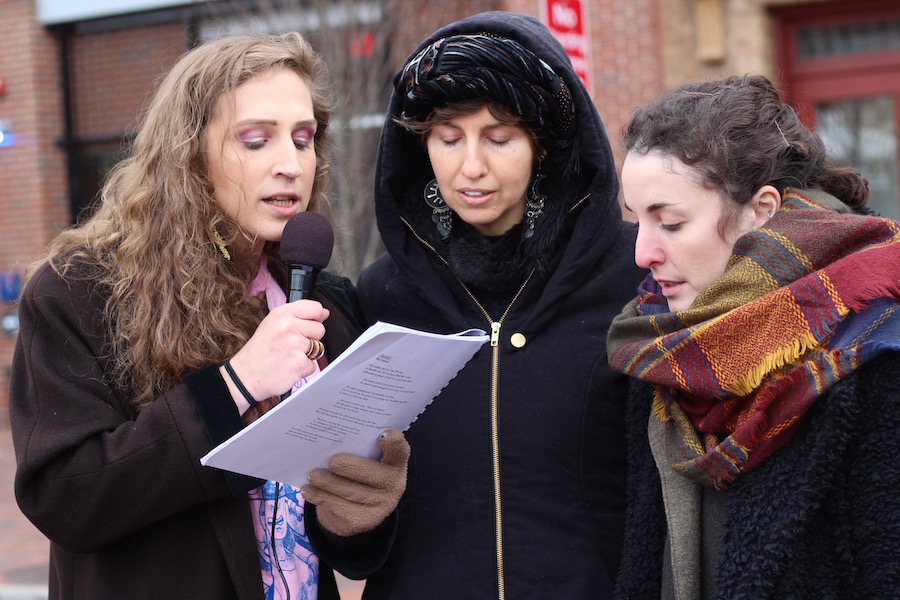 It’s a victory she’s hoping for against New Haven police. JVP’s #DeadlyExchange campaign asks city governments to withdraw their support from week-long counterterrorism seminars that the Anti-Defamation League (ADL) sponsors for U.S. law enforcement officials in Israel. During the seminars, law enforcement officials receive counterterrorism training from members of the Israeli National Police, as well as a crash course in seven decades of Israeli history, as told by Israelis. Asked for more specifics on the seminars after the rally, the ADL did not reply to request for comment.

JVP has framed the seminars as perpetuating the idea that police—and citizens—are safer when they are armed and embedded in the public sphere, a practice that results in what the group calls “discriminatory and repressive policing practices.” Last summer, New Haven Police Chief Anthony Campbell participated in one such seminar, discussing his findings in a private briefing hosted by the JCC of Greater New Haven in October.

Reached by phone Monday afternoon, Campbell called the seminar "by far one of the most profound and life changing experiences I've ever had," praising the ADL as a resource that has made him rethink community policing practices in the city. He recalled meeting 19 other police chiefs from around the United States, all of whom expressed interest in community policing as they learned the history of Israel from the country's national police and a former staffer of Prime Minister Benjamin Netanyahu. 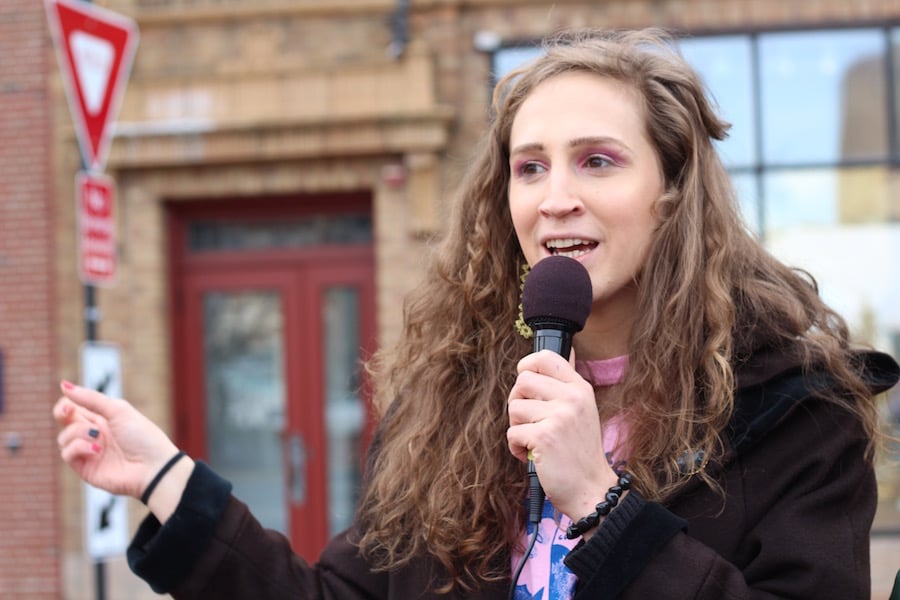 While the cohort spoke to both Israeli and Palestenian law enforcement officials, Campbell said there was no discussion of groups that are still not welcome in the Israeli Defense Forces (IDF), which has a history of racial and religious exclusionary practice. Instead, he said, the seminar focused on "keeping your community safe" by adding layers of police communication and surveillance, particularly around large events. He said he'd brought that knowledge back with him, implementing it at public events including this year's Gospel Fest by placing more police cars in the neighborhood, to observe attendees before they had reached Goffe Street Park.

"There was nothing they were teaching us to make us more militant," he said. He recalled a trip the group took to the country's Holocaust Museum, where he'd learned how German police "became complicit with the SS [Schutzstaffel] rounding people up."  He said he brought that lesson back to New Haven, where he and officers are working to build new systems of trust with citizens.

"Training needs to be such that we make sure that we get the message out that we are not an arm of the federal government or ICE [both of which participate in the seminars]," he said. "That as officers we make sure that we never become part of the problem in rounding up or targeting any specific group ... I'm making sure that it becomes a mindset that officers never become complicit with the federal government or anyone else that it will deprive anyone of freedoms or civil liberties "

"If it were up to me, every police chief in the country should have to take this counterterrorism seminar," he added later in the conversation. 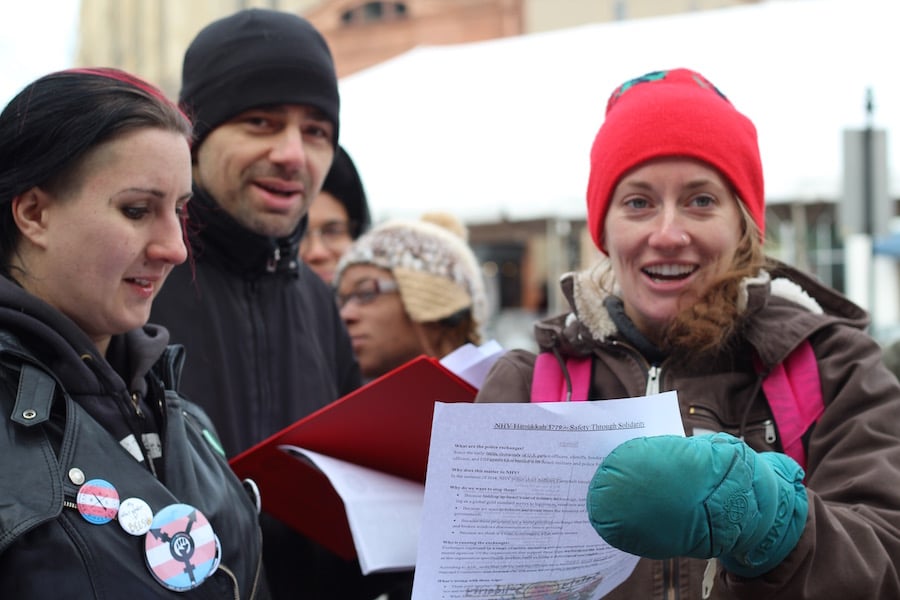 Now, Warshaw and other members of New Haven’s JVP are asking New Haven Mayor Toni Harp not to participate in potential future trips. She cited two unprecedented decisions in Northampton, Mass. and Vermont to pull out of the seminar this month (the most recent trip ran Dec. 2-11, putting law enforcement in Israel during Hanukkah), drawing a parallel with the Hanukkah story, in which a faithful few defeat a great army.

Warshaw grew up Jewish, and said she has since been weighing the tension between anti-Zionism and anti-Semitism in her own life. She said that in the wake of the Tree of Life Synagogue shooting in Pittsburgh earlier this fall, she has been thinking about how many other hate-fueled shootings have been met with little public outcry, and calls for heightened police presence and increased firearm use.

She condemned those responses, calling for “safety through authentic relations” instead. She zeroed in on the last night of Hanukkah as rosh chodesh Tevet—the beginning of the darkest month of the year—as a time to hold onto spiritual light, and fight for it to permeate one’s advocacy practices as well.

Throughout the action, speakers echoed her message, weaving in song, poetry, mourning and ritual between calls for a demilitarized police force. As attendees arrived, organizers greeted them with an English and Hebrew rendition of “Lo yisa goy,” the lyrics coasting over the crowd.

It set an intersectional tone that continued for over an hour. Taking the mic during a short speaking portion, SWAN representative Amber Kelly spoke passionately for sex workers’ rights, asking for community organizations to ask together that “our police force is protecting us, not assaulting and abusing us.”

From Housing Not Jails, partners Donny and Sade (they declined to give their last names) said that they are already brutalized by the New Haven police, and expressed their concern that “it’s gonna make it a terrorist state over here” if New Haven continues to send officers to the ADL seminars. Isaac Newton

“When I came here, I thought I was coming here for safety, ” said Isaac Newton Kinity (pictured above), a Kenyan immigrant and human rights activist who left his home country to flee persecution. “But what is happening today has some more instance that America is not the same as it was, and it’s not as good as we thought it was.”

In addition to those who asked for a stop to the ADL’s seminars—JVP said it will soon have a petition addressed to Mayor Harp—several speakers spoke on New Haven’s ongoing attempts to form a Civilian Review Board (CRB), postponed for two weeks by the city’s Board of Alders. Representing the CRB and People Against Police Brutality, activist Kerry Ellington (pictured below) urged attendees to voice their support for Alders Kenneth Reveiz and Steve Winter, both of whom have proposed a CRB with subpoena power. 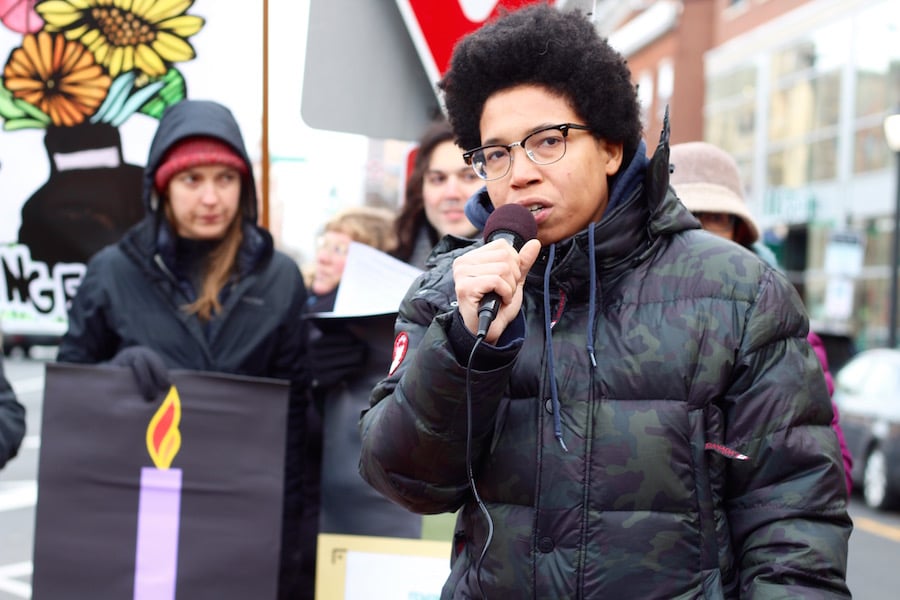 Others took a harder line, echoing Warshaw’s critique that anti-Zionism can exist in a space without anti-Semitism.

“Zionism does equal terrorism,” said Jamarr Farmer, a member of the ANSWER Coalition. “What is happening to the Palestinians is a crime against humanity. And the fact that we have our American police force, who is also militarized … going over to Israel to learn apartheid training? That is just enhancing the militarization.”

“Excuse me!” interjected a woman who later declined to give her name. “I’m Israeli. I find that very offensive.” Farmer continued as Warshaw went over to her, and offered to speak about her concerns afterwards.

“We should let Harp know, and all the police know, that they should not be getting apartheid training,” he said. “They should be working with us. We are the people. We are the constituents here. We are the citizens here. And our lives matter.”

As Warshaw went to “light” each candle, attendees cheered, some hopping from foot to foot to stay warm. She encouraged attendees to visualize “lighting a flame in your heart,” to ignite the quiet activist potential that may be waiting there. Before dispersing, the group launched into a final few songs, seeking to banish the darkness with each word.

Chanukkah oh Chanukkah
The people’s menorah
We want racial justice
A safer world
Gather with your friends to take to the streets
Movement solidarity cannot be beat.

Click on the link below to watch video from the action, or listen to and download a recent episode of WNHH Radio's "Kitchen Sync" with Warshaw.