Arsenal F.C. Fans Find A Home In "The Cannon" 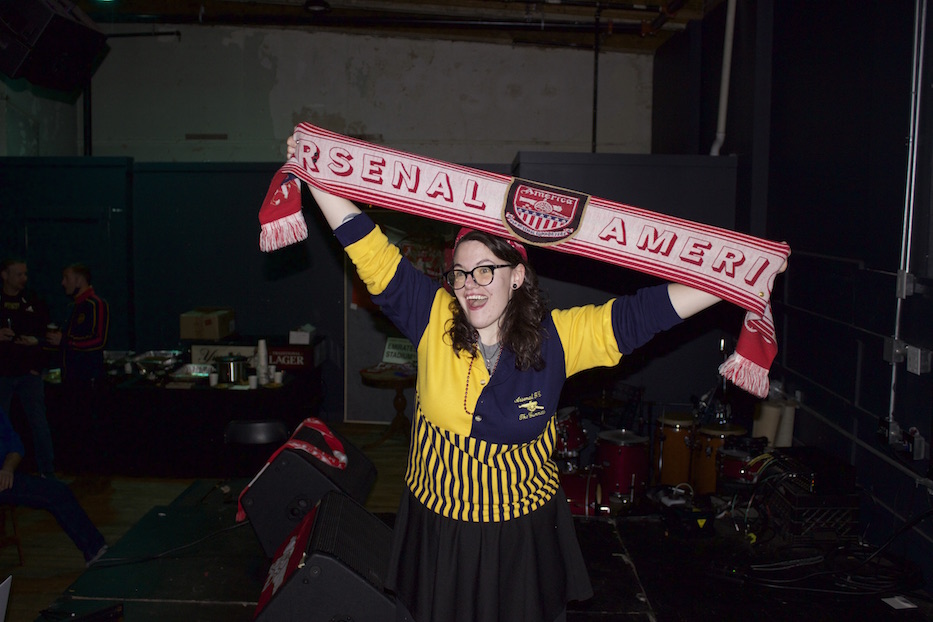 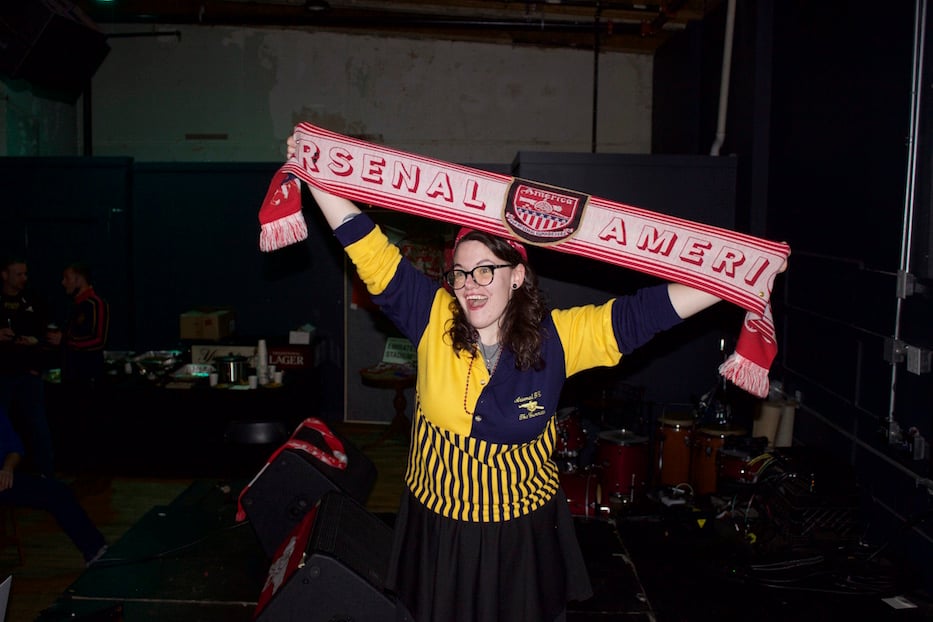 Arsenal lost. But the Gooners won.

That was the story Saturday at the State House, as the New Haven Gooners—the Elm City-based Arsenal F.C. fan club—held a fundraiser for an in-the-works football spot and pub called The Cannon. The space, located at 135 Dwight St., will mark the club’s first official space after years of bar-hopping to watch football matches.

The new pub venture comes from owners Kevin Mackenzie, Tessa Davis, and Skylar Melton, all New Haveners bound by their love of soccer. The fundraiser featured a live watch of the Arsenal vs. Liverpool match that kicked off at noon, a 50/50 raffle, a sampling of The Cannon’s upcoming menu, and for many, pint after pint of beer.

Despite the 4-0 shellacking taken by the team, spirits remained high from start to finish. Though many had come happy just to take in a match on a giant screen, most were there to show their support for the proprietors of the forthcoming drinking hole. What makes the Cannon special, especially for the Gooners, is that it’s coming from one of their own. 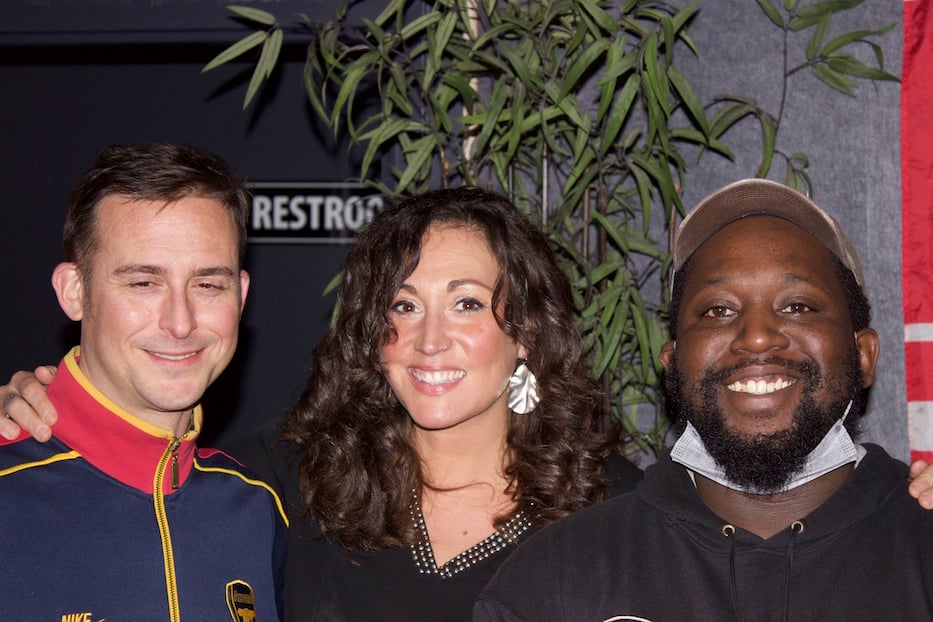 While The Cannon as a business was dreamed up in 2018 and its lease first signed in February 2020, it is a reality 15 years in the making. Fifteen years ago, Mackenzie and New Haven Gooners branch manager Teague Dwyer met watching Arsenal matches in the drafty, stone-walled basement of the now-closed Anna Liffey’s Irish Pub.  Mackenzie said it may have been years before they even knew each other’s names.

“He was just the guy I’d watch matches with at the bar,” he said. Four years later, that Arsenal-centric friendship had blossomed into a full blown club of Arsenal supporters that is now 11 years strong.

The near-fanatical Arsenal support and the camaraderie have remained consistent for the Gooners, but their headquarters hasn’t. What began at Anna Liffey’s moved on to various different bars around town, be it Trinity (despite the fervent Liverpool support among the staff) or the dearly-departed Christy’s, where the Gooners spent much of their time over the years.

The Cannon, Mackenzie hopes, will be a new home base for the Gooners. “I enjoy that we’re building the place that I would wanna see,” he said. Though he doesn’t want The Cannon to be classified as simply an Arsenal bar. 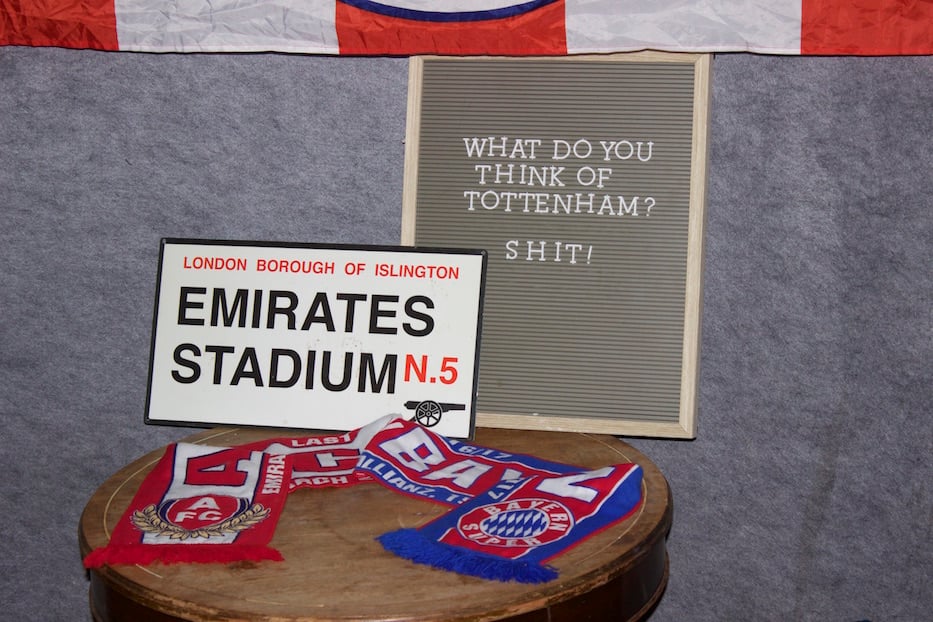 “We wanna bring something to the community,” he  said. “A place where everyone can come together and feel comfortable and feel welcome, whether they like Arsenal or not.”

This distinction works just fine for co-owner Davis, who admits she wouldn’t even call herself much of a fan of soccer, let alone a Gooner. “I mean, I like the game, but I can’t call myself a fan,” she said. “What I will say is it’s the only sport I really respect in my adult life.”

Then why open a bar primed to be a hub for soccer fans? “I like the international aspect of it. It brings in all sorts of people,” she said.

Melton, who is the co-owner and head chef, also hasn’t spent much time watching Arsenal. His involvement isn’t predicated on familiarity with the ins and outs of the Premier League, but on making food that brings joy to whoever partakes. When asked what he’s most excited to make in the Cannon’s kitchen he replied: “Anything that makes people smile.”

If that’s his mission, he’s off to a good start. Attendees of the fundraiser raved over his offerings including jerk lentil and plantain pies, jackfruit Birria grilled cheese, and a jackfruit birria consommé. All of the dishes were vegan or vegetarian, as they will be at The Cannon. Mackenzie is a vegan and influenced the meatless menu. Melton, who didn’t have a ton of experience with vegan and vegetarian cooking before joining the team, finds the menu to be a fun challenge.

“I’m excited to be able to try new things and replicate flavors in vegan dishes,” he said.

The Cannon is not just the dream of one of the Gooners come to life, it’s also being shaped by other members of the club. Abigail O’Keefe, who serves as assistant branch manager of the club, said that amongst their ranks, The Cannon is thought of a New Haven Gooner project.

“We’ve gotten a chance to give our input and go down and see the space and walk around in it,” she said.”It feels like all of ours.”

She also expressed excitement at being so close to the finish line of the new space. The last time the Gooners watched a match together at a bar was March 7 of last year.

“And the pandemic brought everything to a screeching halt,” she said “Over the last year or so we’ve watched matches at our houses, in backyards, at Trinity. But we haven’t had a place of our own. It’s been an uphill battle.” 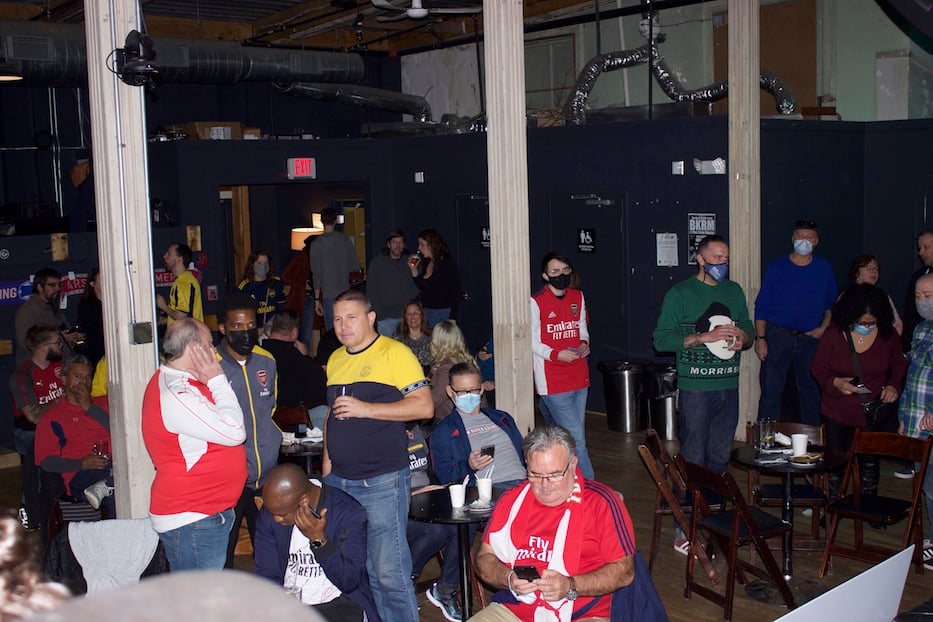 It appears others shared in the excitement to finally see the end of the tunnel and it showed in their generosity. The fundraiser raised over $2500 towards the completion of the Cannon. In turn, the fundraiser’s organizers decided to show some love in return. After leading the crowd in a spirited rendition of the Gooners' official fight song that revived the room’s energy after the deflating loss, O’Keefe and Dwyer, along with the three owners announced the winner of the 50/50 raffle, and handed out numerous other prizes.

Among them, a vintage arsenal pullover sported by O’Keefe, a bottle of Johnnie Walker, and a gift bag from Counterweight Brewing Company in Hamden.

Mackenzie gave thanks to all in attendance. “We still have a ways to go, but we’ll get there with your support. Thank you all so much.”

Davis noted how much she missed the company of strangers and how she couldn’t wait to connect with people across the bar once the space opens. And Melton hinted that he might just get into soccer once The Cannon is open.

I asked Kurt, a Gooner and longtime friend of the owners, what the Cannon opening would mean for the club.

“The Cannon finally gives us a home that really feels like home again,” he said. “Towards the end of Christy’s things started to lose their spark, but with one of our own putting in the work, it really feels like the opening will be a homecoming”.

A few more beers, and a couple of more shout of the fight song and the event was over, but for owners of The Cannon, and the New Haven Gooners, it feels like things are just getting started.

The team behind The Cannon is fundraising here.