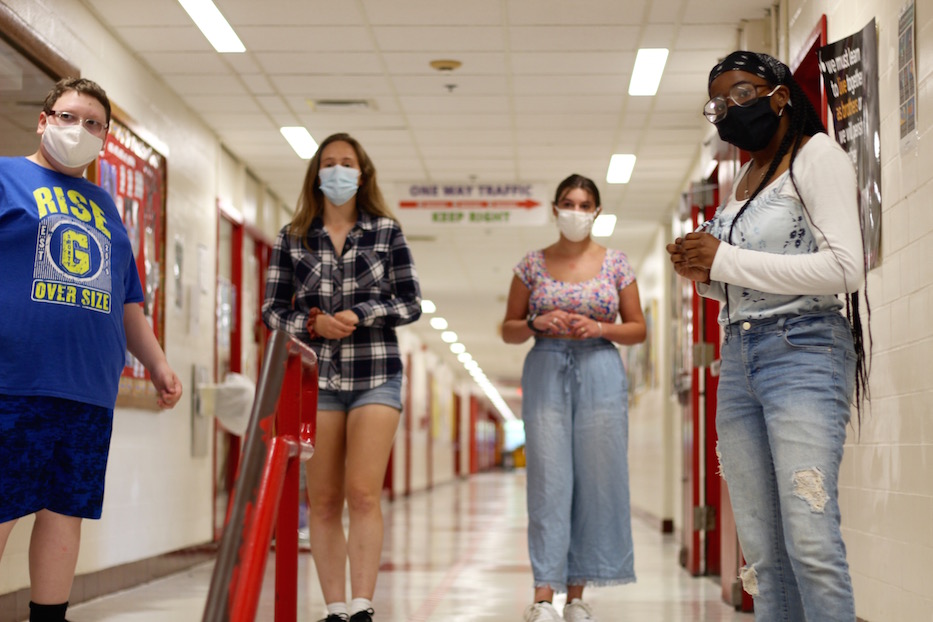 At the far edge of East Rock Park, six young actors were scheming. They scoped out the right spot and formed a tidy triangle in the grass. They paid no mind to a thicket of lacrosse players nearby. Teacher Salvatore DeLucia and lifted a camera. Then on cue, they began to run, snapped back into place, and did it again. Little did onlookers know, they were watching the makings of pandemic-era musical theater.

That scene unfolded over multiple takes at Wilbur Cross High School, where the Lights Up Drama Club has returned for A Light In The Dark, a live streamed, pre-filmed showcase and cabaret. Fifteen months after Covid-19 killed the school’s spring musical last year, a team of two teachers, nine students and two alumni have rallied to bring theater back to the school—and onto the screen. Alumni include Brandon Oliveras and Bri Chance. Of nine actors, two are finishing the year remotely.

Virtual performances are scheduled for June 4 and 5 at 7 p.m. Tickets and more information are available here.

“We’re small but we’re mighty,” said Heather Bazinet, who co-directs the club when she isn’t working as a speech and language pathologist at Cross and Lincoln Bassett School. “It’s been hard getting kids involved. It’s hard because we weren’t here. I never imagined it [the pandemic] would go this long. Not in a million years.” 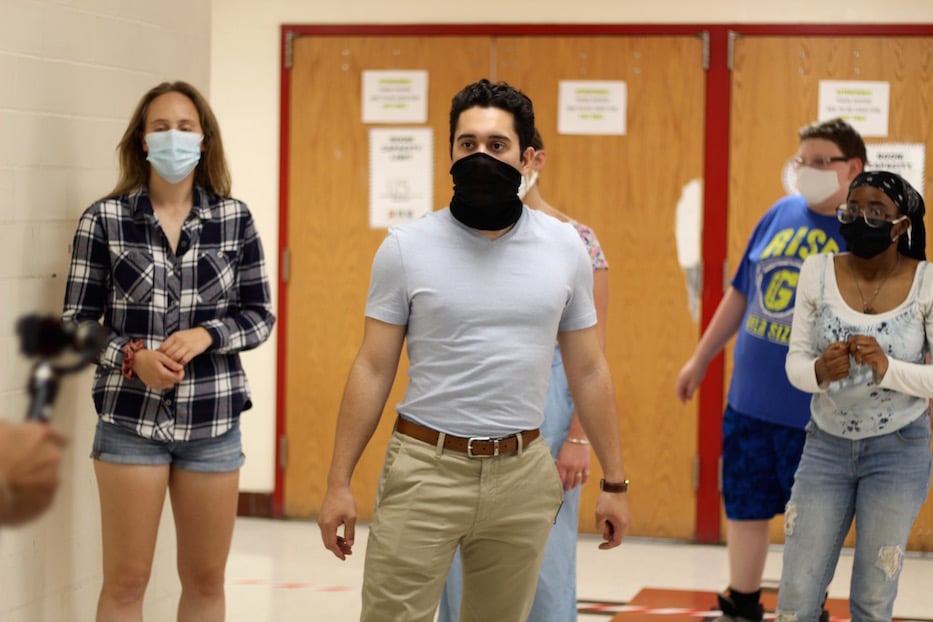 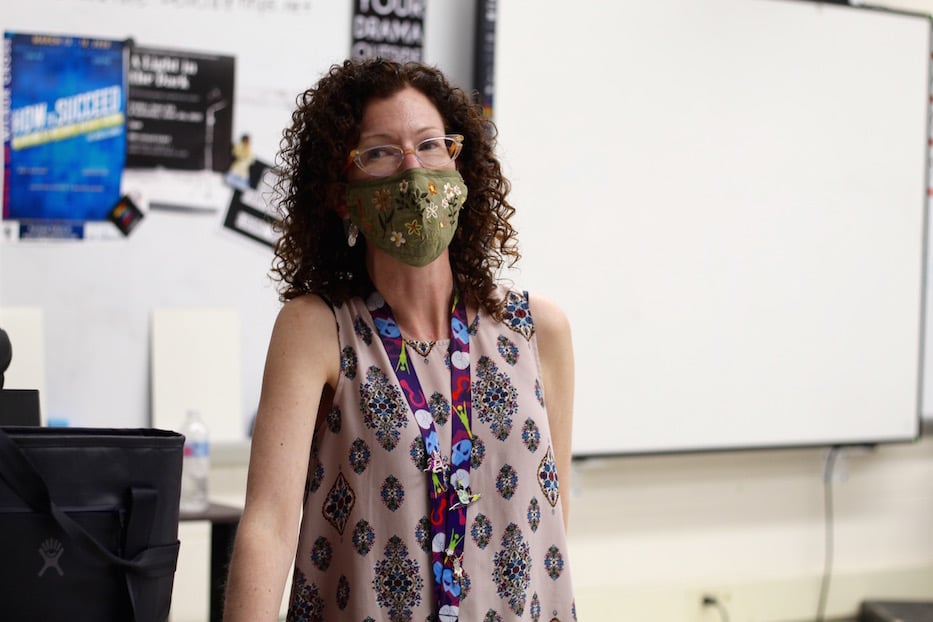 The concept of a cabaret was born earlier this year, after Bazinet found herself scrambling for something students could do that was Covid-safe and still steeped in drama and musical theater. As an educator, she’s seen the effects remote and hybrid learning have on students. Last year, she designed a podded-up rehearsal plan to bring The Little Mermaid to Cross as the 2021 spring musical.

It relied on the information that schools would reopen gradually in November of last year. Then the city’s Board of Education pushed the date back to early April 2021. Bazinet remembered feeling crushed. She looked to online performances that other schools had tried, from full-length Zoom musicals with digital backgrounds to numbers with students singing on screen in neat one-inch boxes. The idea for a cabaret, where students could perform both solo and pandemic-era ensemble work, sprang to her mind.

With a blanket music license, she found pieces that seemed right for the year, including selections from the Broadway musicals Jagged Little Pill, A New Brain, and Prom. She reached out to students and alumni who she thought might be interested. She enlisted DeLucia, who is the lead advisor on the drama club and teaches English and technical theater at the school. They also pulled in music director Matt Durland and band and winds director Kendall Alderman, who set up a mobile recording studio.

“We could have gotten away with not doing anything,” DeLucia said. “But I started seeing the work that students were doing, and I started talking to cast members. Especially after this year, this is a labor of love. Because it’s a film, it’s a kind of time capsule.”

The medium is a little magical, he added—it fuses his love of film and that of musical theater. Tuesday afternoon, students recorded “I Feel So Much Spring” in a classroom, standing cautiously apart as masks covered their faces. After singing the piece, they waited at different corners of the room for the next direction. 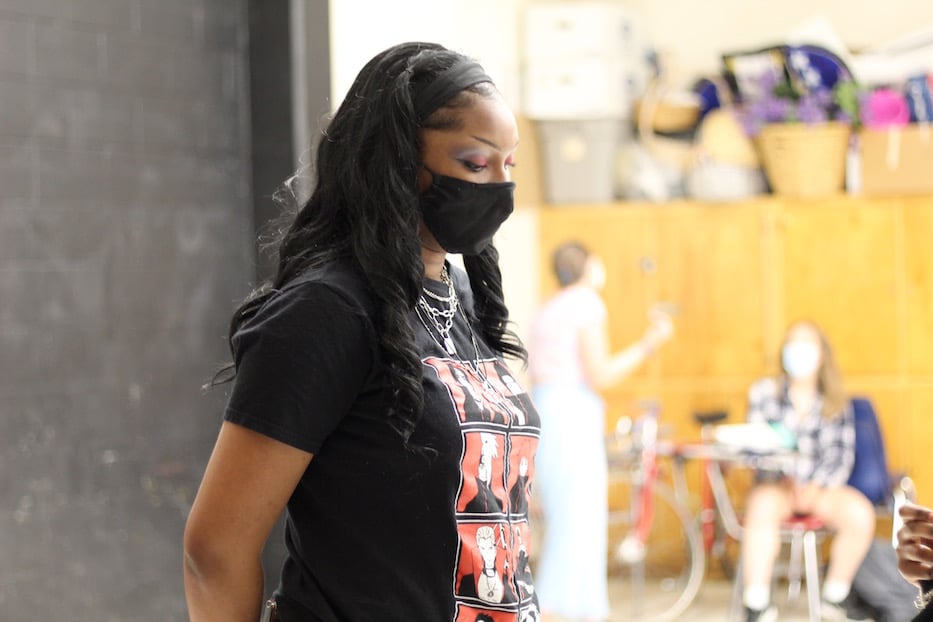 Zara Callendar, a Wilbur Cross alum who played a secretary in the ill-fated How To Succeed In Business Without Really Trying last year, returned to cheer on cast members for a few minutes. Last year, “I was really, really upset” when the performance was canceled during Covid-19, leaving her to finish out her senior year online. This year,  she has started as a freshman at the University of Connecticut, with the intention of studying psychology and becoming a counselor.

She said it’s good to see several of her classmates performing again—even if the format looks different than it did a year ago.

Inside a drama classroom, students gathered around DeLucia, their conversation slowing to a halt. A few waved at Callendar when she popped in. With a camera bobbing in one hand, DeLucia explained the plan. Students were going to walk through a door and run down a hallway, in what would become the grand finale for the show. He would film it and then set it to the audio. Students waited, their ears pressed to the classroom door, for him to shout “action!”

When he did, they burst out into the open, empty hall. DeLucia followed them with the camera, doing multiple takes. He whirled around as if he was dancing to a soundtrack. He crouched low, and then panned upwards as he rose gradually. Students ran hand in hand through takes, Oliveras jogging at the back of the group to make sure no one got left behind. For the final shot, they headed to a sun-soaked East Rock Park.

Both teachers and students are happy to be back, they said. Since last March, DeLucia has lived in a kind of cultural limbo, where live music is suddenly a high-stakes undertaking and the threat of infection is omnipresent. While he was vaccinated earlier this year, he and students still mask up to prevent any potential spread.

He said when he heard students singing together for the first time last week, something popped open in his chest and started to bloom again. He played the video of students for his wife, and then for his two young daughters who think that members of Lights Up “might as well be movie stars.”

“To hear them singing—I didn’t realize how much I missed it,” he said, noting that he grew into the role after years at Truman School in the city’s Hill neighborhood. “This is my dream job, to get to do what I do. It’s made me a very complete person” 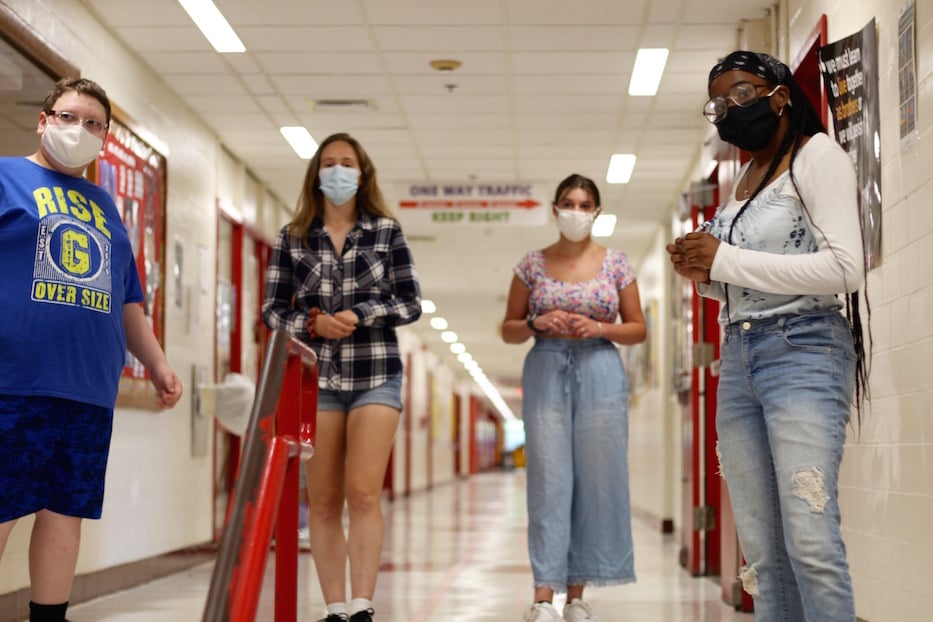 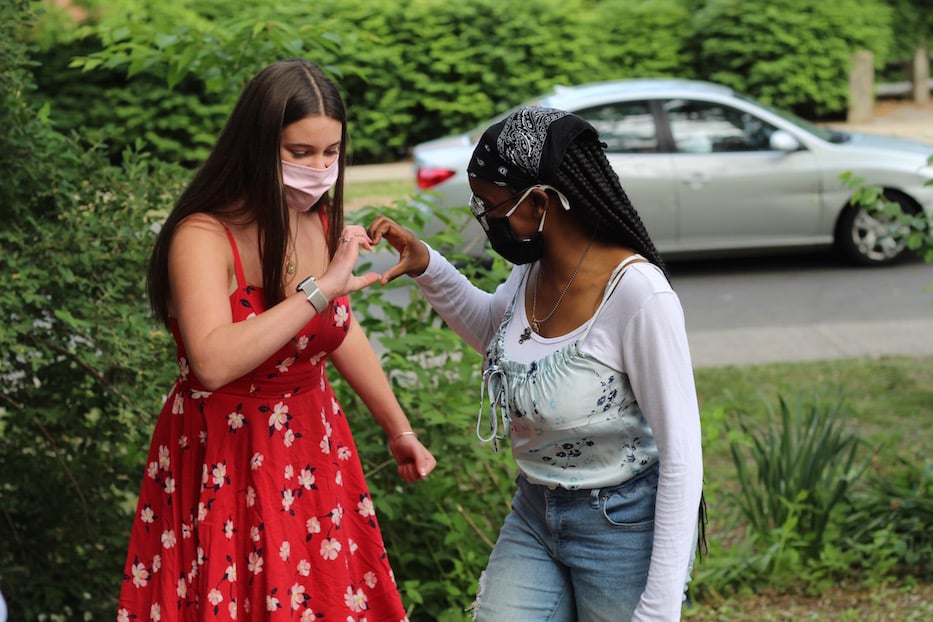 Junior Mari Caldwell said they were excited to be back in school and performing again. Last year, they played Wally Womper in How To Succeed. When the play was postponed and then cancelled, they cried for days. They spent months learning remotely from their home in the Brookside Apartments, struggling with the isolation of Covid-19.

Now, they’re happy to come to school, which they balance with the drama club and a job at Loose Leaf Boba Company downtown. They chose a monologue from Goldilocks because they relate to the character.

“I relate to Goldilocks in a way,” they said. “She was just a misunderstood kid who got misled. We all make mistakes.”

Oliveras, who returned for the performance, said the past year has been a trying one for him. When schools shut down last March, he was about to take the stage as J. Pierrepont Finch, the cunning and capitalist window washer who works his way up to a New York businessman. Losing the show—his last as a student at Cross—was a blow. So was remote learning. After finishing his senior year online, he put college on the back burner to care for his grandparents in Vega Baja, Puerto Rico.

Both are in their 80s, and announced that they would be selling their land in the thick of the pandemic. Oliveras went to examine their four acres and help them prepare for a move to Arizona. In January, he returned to New Haven and started taking classes at Gateway Community College. He is also working part-time as a paraprofessional at Hill Central School, where he refers to his 15 history students as “my chickens.”

“I’m getting into self-discipline, getting into my work, starting the stepping stones for my career,” he said. “I’m really blessed. I thank God that I have a job and that I’m in school. I’m really thankful and I can’t complain.” 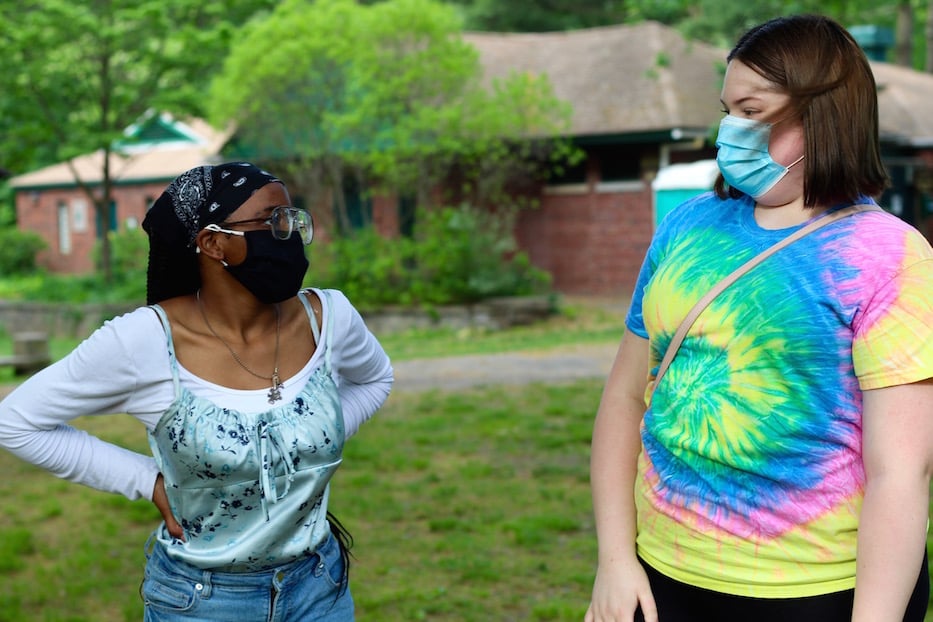 In the park, the group formed a circle, then a small phalanx. DeLucia stood in front of them, his hands steady as he yelled “action!” Students ran around him, laughing, then repeated it for a second time. DeLucia called for one more sun-soaked shot before 6 p.m. They did a final take, and then scattered.

Millie Sunshine Carlson, a junior who was playing the secretary Hedy LaRue when the play was cancelled last year, called musical theater her reprieve. She started acting as a cast member of Sister Act at Cross, and fell in love with the art form. When school went remote just a day before opening night, “I was devastated.” LaRue had been one of the first roles that Carlson genuinely loved. She learned to take quarantine as a reminder to slow down and care for her mental health, she said.

The pandemic hasn’t killed her love for musical theater, she said—she hopes to “be in some realm” of the dramatic arts well beyond high school. In addition to ensemble performance, she is performing the song “Live Out Loud” from A Little Princess.

“It’s therapeutic,” she said. “I was a really shy kid. With theater, I can just be goofy and be who I am.”

Lights Up Drama Club's A Light In The Dark runs June 4 and 5 online. Tickets are available here.