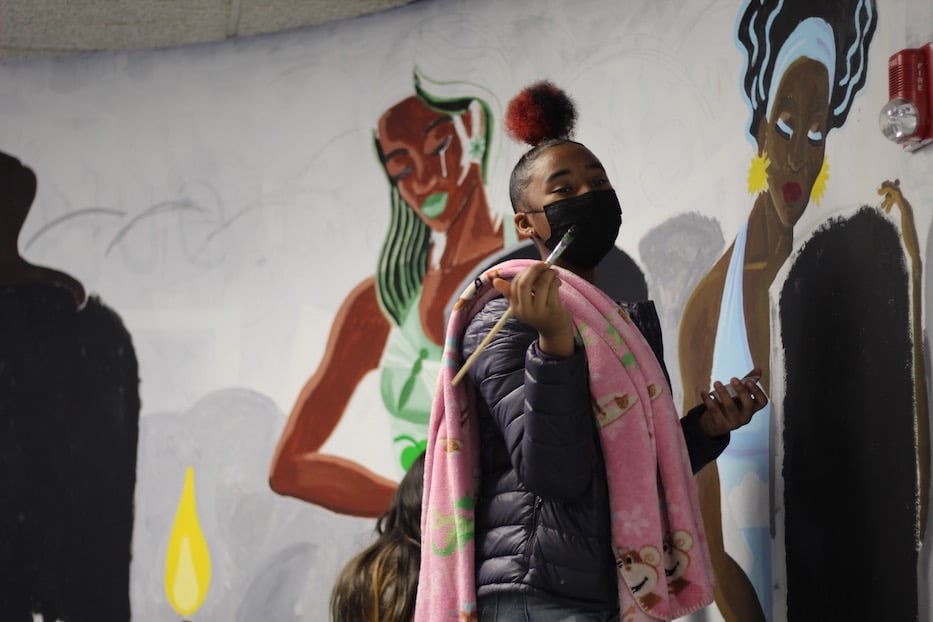 Euphrosyne, Thalia, and Aglaia float on the wall, their gowns a shock of color as they greet passers-by. At the far right, the sun rises from Aglaia’s feet, clouds drifting up the sky-blue fabric of her dress. Her afro waves in the wind, tied back by a bolt of blue fabric and streaked in the same powdery blue. Beside her, tropical plants bloom across Thalia’s hips. Shimmering planets appear against the oxblood-colored sky that clothes Euphrosyne.

Each holds a shield that is also a blank chalkboard, waiting to take on the collective weight of a school community.

The Three Graces—reimagined as young Black and Latina women—come from artist Kwadwo Adae and students at High School in the Community, where a new mural has appeared at the bend of a second floor hallway. Painted as a memorial to victims of gun violence, it is the initiative of two “ProCos”—production companies, or peer-led clubs—dedicated to visual art and social justice. Both have been working with Adae since last year.

While the project began early last fall, it took on an added weight following the unexpected loss of Hamden teen Will Vasquez, a sophomore at the school who was shot and killed in Waterbury in October 2021. Since the project began, two dozen students have joined Adae to paint during the school day.

“Gun violence is an issue that has hit quite a few students in the program very hard,” said senior Adrianna Henry, president of the Social Justice ProCo. “As a Black woman in America, it hurts. I worry every day about my brothers and myself—that small machine has the power to take someone’s life. When this [mural] is done, I can come to it and spend time here.”

The project began last fall, when Henry and fellow senior Korrine Moriarty approached each other with an idea. As the head of the Social Justice ProCo, Henry often finds herself talking to peers about the prevalence of gun violence in the city, and the way it affects not just one or two families, but entire neighborhoods, church and school communities, and circles of friends. In the past few years, her belief in stronger gun legislation has led to an interest in pre-law studies and behavioral science.

It’s also personal, she added: she’s one of seven siblings, and the daughter of immigrants who moved from Jamaica to New Haven for greater opportunity. As a young Black woman, she sees how the weight of gun violence sits heavy on her mother’s shoulders, and the shoulders of other Black women in her community. It’s a stress she doesn’t want to also have to carry.

“We cannot build an economy on the backs of broken people,” she said. 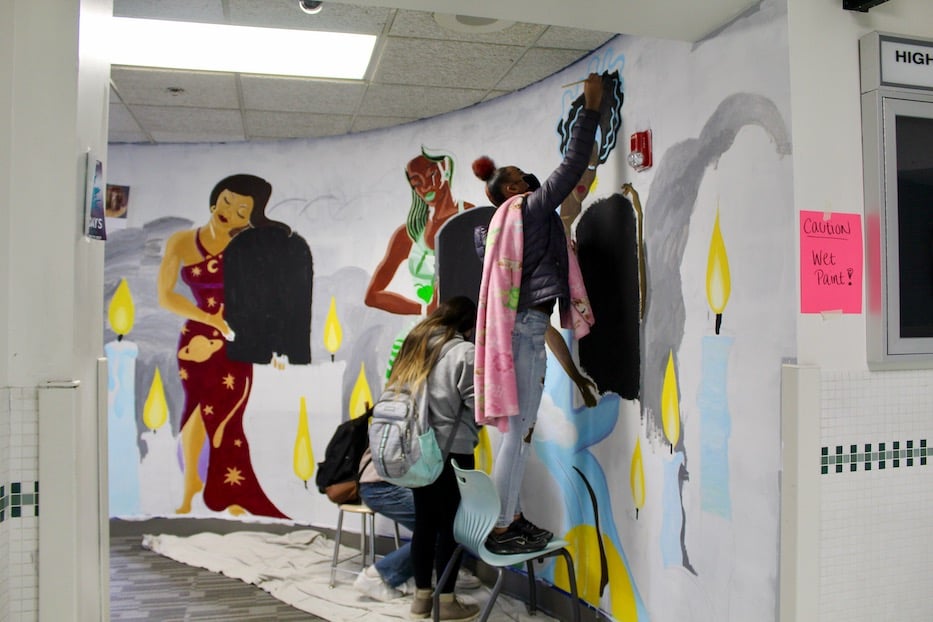 As the head of the Visual Arts ProCo, Moriarty said she spends time thinking about how to take big, hard-to-process ideas—including the extremely American epidemic of gun violence—and express them in art. Living in Hamden, she’s spent the last several months talking to her mom and friends about the number of violent threats at Hamden High, and the fear students must experience simply going to school each day.

She recalled telling her mom about routine lockdown drills and a new locked door policy at HSC, through which teachers now must keep their doors locked during class periods, and watching her grow visibly distraught at the news. “We need stricter gun laws in this country,” she said as Adae filled small dishes with gray, black and light blue paint in the hallway behind her.

By the beginning of their senior year, both young women had already started thinking about the mark they wanted to leave on the school after graduating. Both also wanted fellow students to have a dedicated healing space to sit with and share their thoughts. With Magnet Resource Teacher Dianna Carter and then Adae, they began thinking of ways to replace a sprawling chalkboard wall on the second floor.

The mural, based loosely on Alexandre-Evariste Fragonard’s eighteenth-century canvas of the same name, was born after several brainstorming sessions. In Greek mythology, Euphrosyne, Thalia, and Aglaia are the carefree, often naked, rosy-cheeked and cherubic daughters of Zeus, defined by what Adae called “the abundance of youth.” They often hold flowers and newly-harvested fruit, or sometimes touch each others’ warm, ample and sun-kissed rolls of flesh. 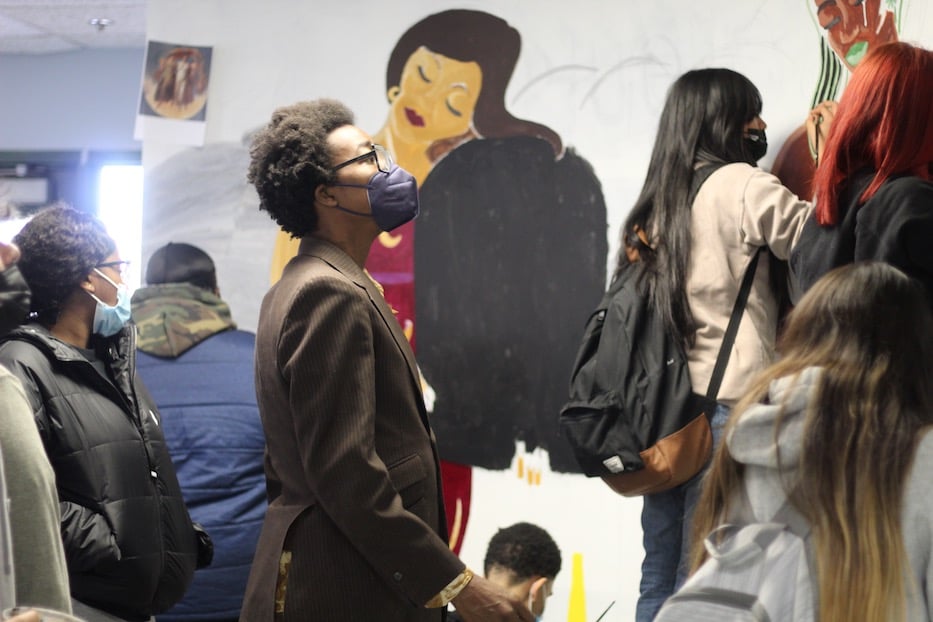 Top:  “I wanted to really acknowledge what our youth is going through, and what they’re being asked to carry," Adae said. Bottom: Senior Robert Palmer (at far left) and his classmates work on the mural.

At HSC, Adae flipped the script. As Black and Latina women, the three are meant to reflect the school community, and the city that blooms around its Water Street building. They hold blank chalkboards, which some students and staff have suggested also look like shields. Adae prefers to keep it open ended, he said: they can be both. A special chalkboard paint will allow students to write on them for years to come.

“It’s a really hard thing that we’re asking kids to bear,” he said. “I wanted to really acknowledge what our youth is going through, and what they’re being asked to carry.”

Already, the mural has helped students find a sense of peace and healing. On the cusp of February break last week, freshman Tioana Williams said looking at and contributing to the work “just gives me strength.” Born and raised in the city’s Hill neighborhood, Williams grew up painting in her free time as a way to relax. She chose to attend HSC after an older sister went to the school, and said the mural helps her feel more at home. When she looks up at Aglaia, she sees herself, her sisters, and her friends reflected back.

As she chatted, she filled in the blue wisps floating up through Aglaia’s gently undulating afro. She and Adae debated the merits of giving her a more voluminous crown or leaving it within a tight blue outline.

“It makes me feel comfortable in the school,” she said. “There’s just been a lot going on, so this helps me clear my mind.” 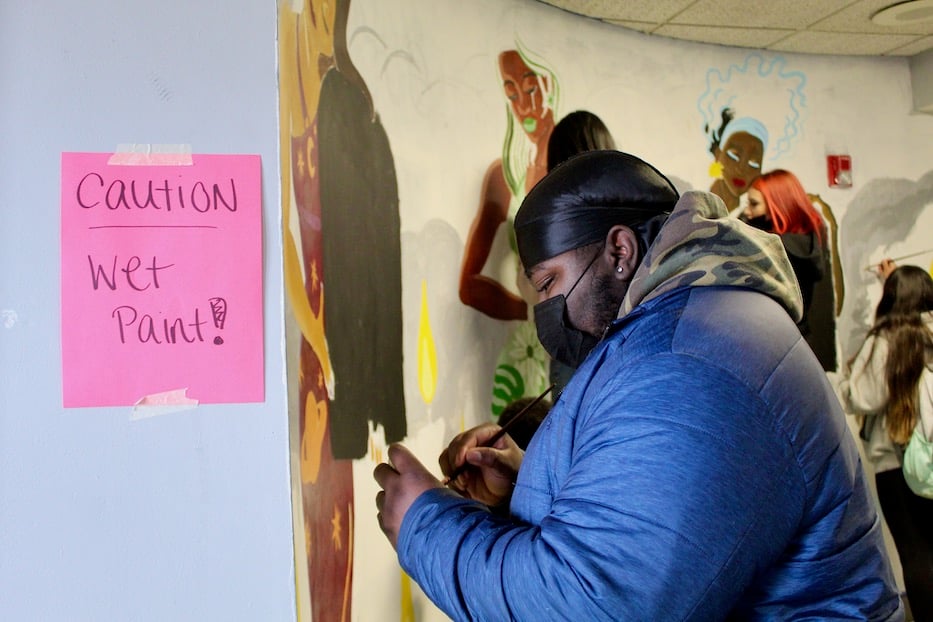 Picking up a paintbrush at the other end of the mural, senior Robert Palmer agreed that the act of painting, especially during the school day, helps him relax. As a kid, Palmer started making artwork because it was fun. Years later, he’s moved by the fact that he gets to be part of showing “these three powerful women,” he said. He’s also grateful to have the wall as a space to remember and reflect on the loss New Haven has sustained from gun violence.

When a tragedy strikes HSC, Carter said, school counselors and social workers make themselves immediately available to students who need and ask for support. The school also has a relationship with the Yale Post Traumatic Stress Center that means three clinicians are on call at the school from 9 a.m. to 1 p.m. every day. Following Vasquez’ passing last year, staff set up memory boards in the school’s cafeteria for students to write on.

Henry, who has watched the mural bloom into being over five months, said that she sees the new work as warm and welcoming. Long after she has graduated, she’s hopeful that her peers will return to it, pick up pieces of chalk, and let the Three Graces absorb some of the emotional weight they are holding. 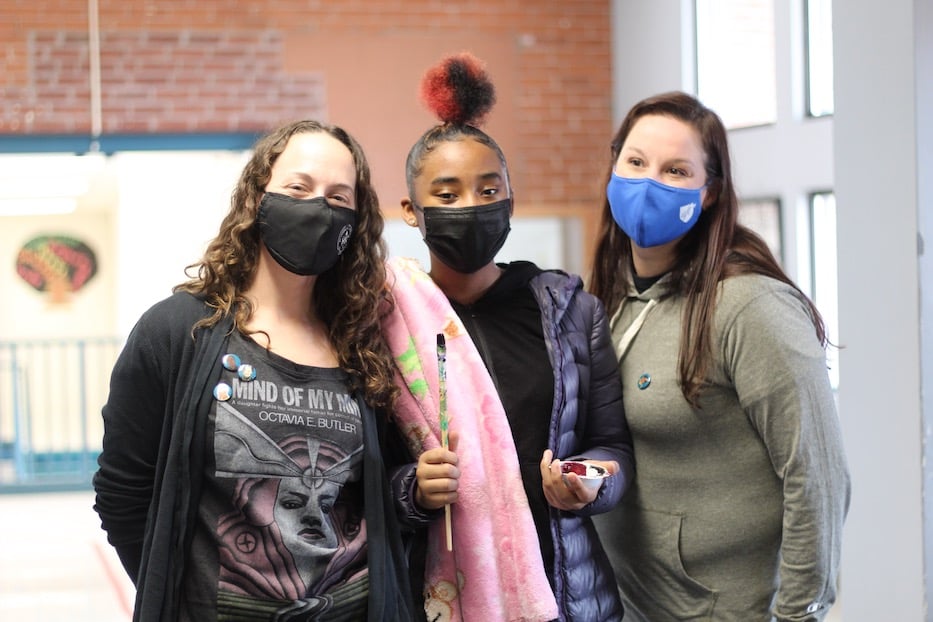 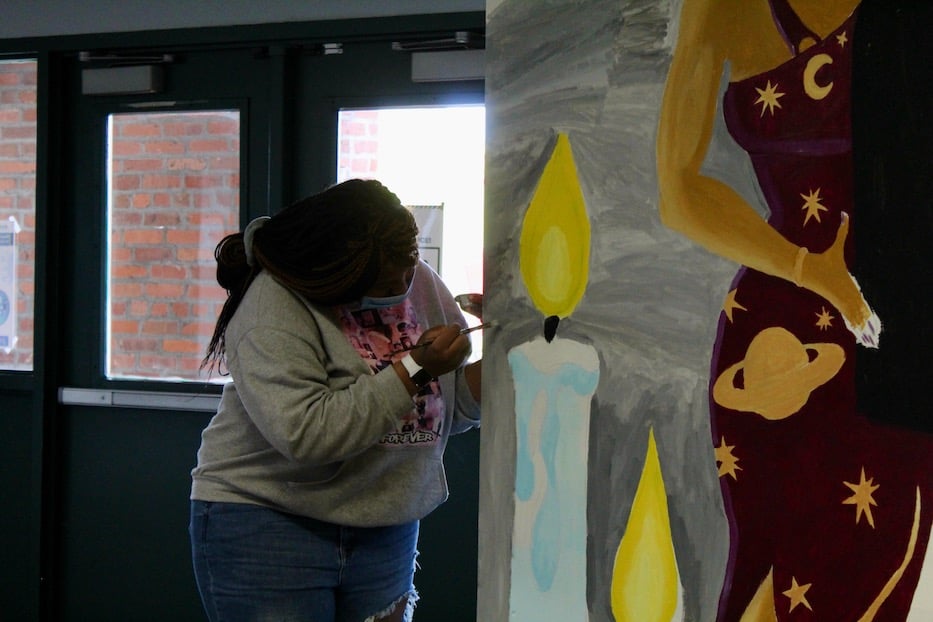 As he watched students fill in rolling clouds and flickering, dripping wax candles, Adae beamed, fielding questions about acrylic paint and checking in with students. For over a decade, he’s watched kids grow up between lessons in his studio, a sunlit, airy space now on State Street where the door stays open and laughter and music floats outside if the weather is warm enough.

In addition to his work as a public artist, Adae is also a parent who has spoken openly, and often with great emotion, about his fears around gun violence and the need for dedicated healing spaces in the city. When he sees news that another young person has died by gun violence, “it makes me think how we as a society kill our kids,” he said.

“The hole that is left in society when a young person is taken from us—that hole cannot be mended,” Adae said last Thursday, as he prepared neat, tiny dishes of white, gray and black paint for students. “In art, the Three Graces are always depicted as these young, Caucasian ladies fully embodying youth. The abundance of youth. And those are the things that are taken from youth in an act of violence.”

“A lot of kids come up to it and say to their friends, ‘Which Grace are you?’” he added. “That’s beautiful. It means they really see themselves represented.”

Day 4: @HSCNewHaven freshmen and seniors painted today. Euphrosyne, Thalia, and Aglaia are holding tablets made with chalkboard paint, serving as a safe space where students are invited to write and express their emotions on gun violence. pic.twitter.com/vrZdChiqSU