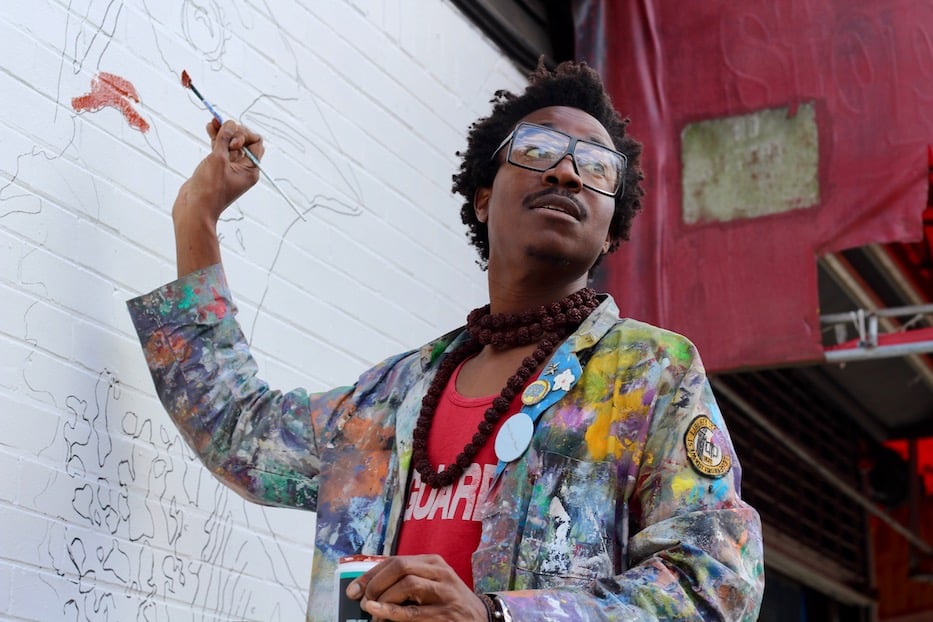 By the time they become visible from Dixwell Avenue, two of the birds have already lifted their bodies in flight. Talons extend beneath them; backs become long, clean lines. Another beats its wings downward, neck arched, whole beak open. One more expands its whole wingspan in a rush of greens and yellows, pushing the air as far as it will go.

The larger-than-life sparrows come from artist Kwadwo Adae, who this week began work on a mural intended to counter police brutality and neighborhood gun violence with a message of peace. The mural, which he expects to finish in mid-October, is located on the side of Moe’s Market, just two blocks from where Stephanie Washington and Paul Witherspoon were shot at by police in their vehicle earlier this year. 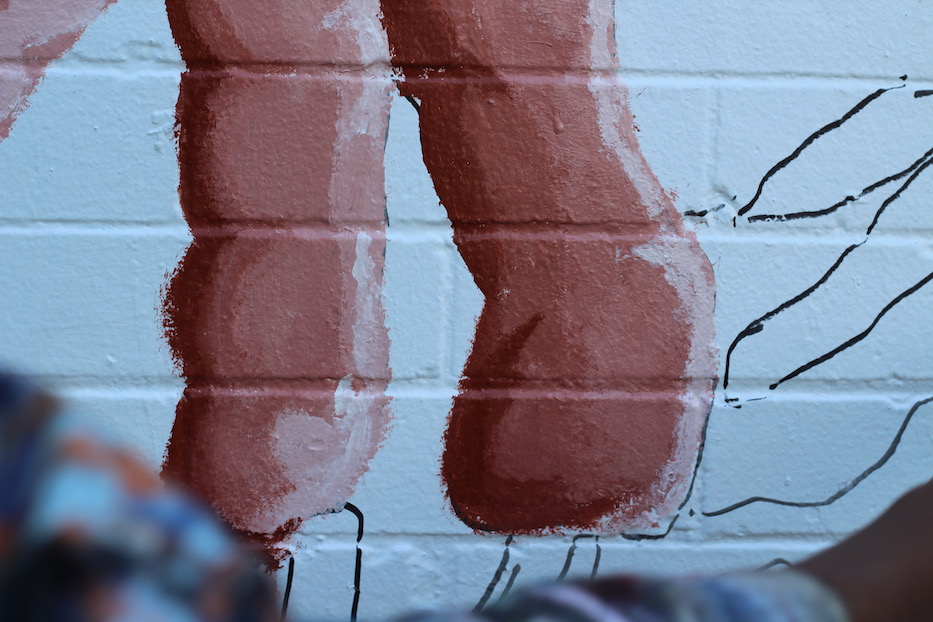 “I wanted to choose the sparrow as a bird that can remind the community about peace and freedom, which are the antithesis of what happens when gun violence is brought into a community,” Adae said at the site Tuesday afternoon. “Back in April, when Yale and Hamden police fired 17 shots into the car of Stephanie Washington and Paul Witherspoon, that does not leave you feeling peaceful. That does not leave you feeling free at all.”

“I had a lot of time to dwell on the effects that police violence has on a community of color,” he added. “Gun violence—it affects people greatly. After it’s out of the news cycle, after people have stopped protesting, the aftermath is still there, always. And it’s heavy, and it hurts, and it has to be dealt with.”

Adae designed the mural earlier this year, when he was also working on a large-scale project downtown that later fell through. In part, it is inspired by his own experience protesting police violence in New Haven, Newhallville and Hamden this spring, as activists mobilized for greater police accountability, testified before Hamden government officials, and held vigils at the site of the shooting.

Initially, Adae planned to paint on a picket fence on Huntington Street (he praised Newhallville Alder Delphine Clyburn for her ongoing support), but realized that he would need a sturdier surface if he wanted the mural to last. Around the same time, he moved studios from downtown New Haven to State Street, and temporarily lost steam on the mural as he readjusted to a new space, then dove into a summer art academy.

Then three weeks ago he heard from Stephen Cremin-Endes, director of community building and organizing with Neighborhood Housing Services (NHS) and a frequent supporter of Adae’s public murals in the city. Cremin-Endes wanted to connect Adae with Moe’s Market owner Bachar Jandali, who was excited about the project. Within days, the artist was buying primer and paint.

“I think it’s gonna be really nice,” Jandali said Tuesday, peeking out from the shop to track Adae’s progress around 4 p.m. “The neighborhood is going to like it.” 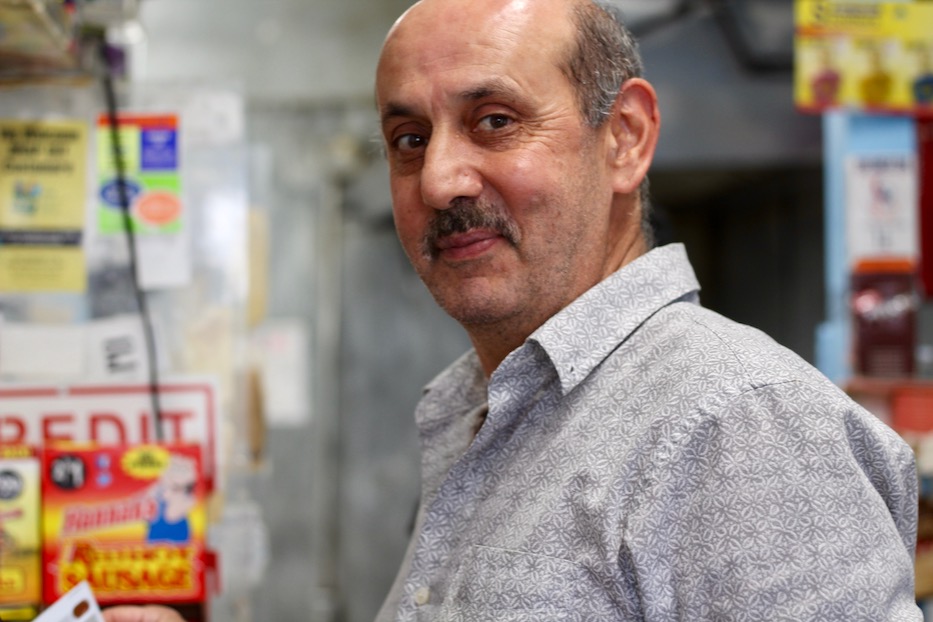 Already, Adae has attracted a few fans who now stop to check out the mural’s progress. Last weekend, he got to know several Division Street neighbors while priming the walls, setting up a projector and tracing the sparrows onto newly-painted and primed brick. Pointing to one house Tuesday, he ran through a list of everyone who lives inside, stopping only to say hello to passers-by.

Tuesday, a gaggle of students lingered after hopping off the school bus on the way home. Lifelong New Havener Joe Miller, who lives above the market, stopped to make sure Adae had included his signature, so no one would claim it as theirs. As he yelled to Adae—”Hey! Where your name at!”—he said he’s been checking the mural’s progress each morning, already excited for the day he looks out the window and sees a finished work.

“It’s gonna look good,” he said. “It’s a good idea, what he is doing. It’s good for the people to see how an artist works, and we need more of that in the community.” 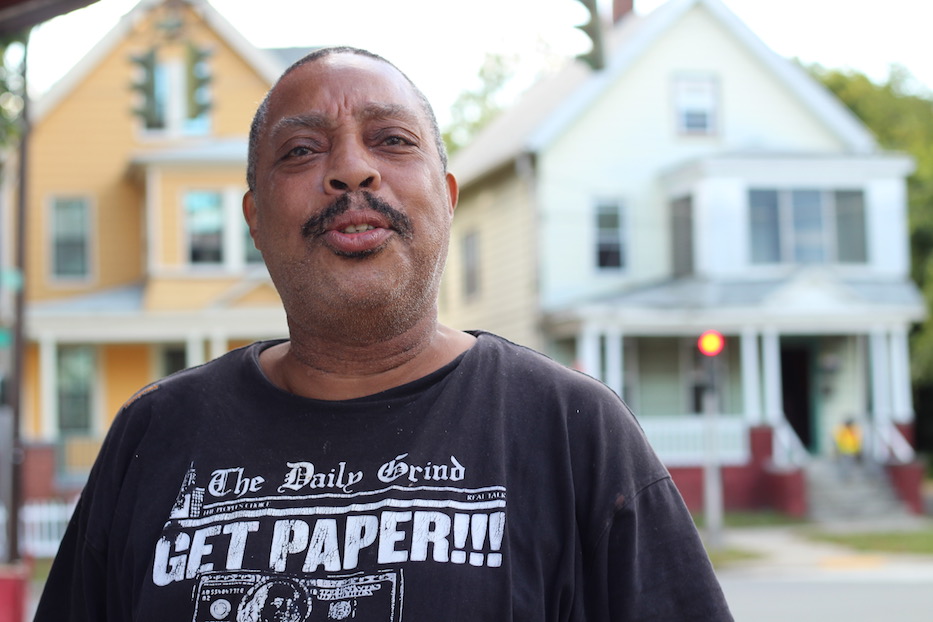 “Maybe it’ll brighten up the neighborhood!” added a house painter named AJ (he declined to give his last name) as he stopped to take the design, picked up a bottle of water and headed back to a job across the street. Which is Adae’s hope too.

“I’m hoping that painting birds that symbolize peace will bring peace,” he said. “Bring calm, bring healing to a community that really needs it. And hopefully people will notice them flying around from tree to tree. These little birds make me so happy.”

“Maybe if they were huge, we would notice them more,” he added. “Treat them better. Or care about them more. They share the community with us too.”