At Lunarfest, "The Farewell" Strikes A Chord 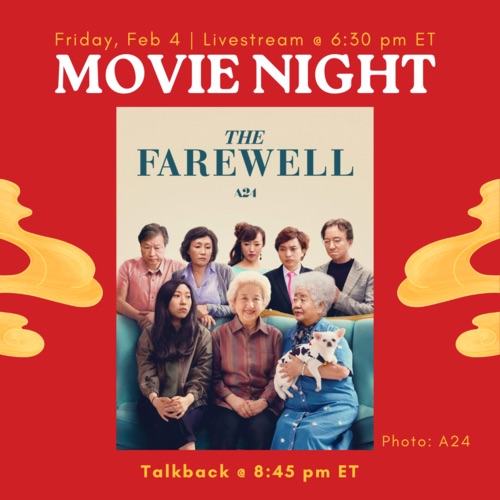 A multigenerational, transnational family is seated around a table. They have reunited under the pretense of a wedding. In reality, they are gathered to share the final days of the family’s matriarch Nai Nai, who is dying of lung cancer. Having for the past 25 years been dispersed across the world—one part of the family in China, another in Japan, and another in the United States—the family members all feel guilt for having been gone so long before coming home.

“It’s been too long since we’ve all been together like this,” Nai Nai says.

It’s a scene from Lulu Wang’s 2019 film The Farewell, screened Friday night as part of Yale-China’s Lunarfest 2022 schedule of events. As it played before a New Haven audience in collaboration with the New Haven Free Public Library (NHFPL), the scene felt both grounded in specificity and increasingly relatable in a multicultural, diasporic city and world.

The event is one of the 16 scheduled this month, from Feb. 1 to 24, to celebrate the Year of the Tiger in New Haven. It drew a small but engaged group of 16 attendees to their Zoom screens to contemplate what to do when their notions of home are rooted in place—and when Covid-19 restrictions on travel make returning to home difficult or impossible.

Based on her own lived experience, Wang’s 2019 film tells the story of a family that has come back together across multiple countries as a way to bid farewell to Nai Nai, without breaking the news that, at 80 years old, she has been diagnosed with stage four lung cancer. In both the film and episode of “This American Life” from which the film is adapted, the family’s decision revolves around the idea that Nai Nai may live longer if she does not know she is dying.

So when they gather to say goodbye, they stage Wang’s cousin’s wedding instead of an emotional farewell. In the film, Wang’s character is named Billi and is played by Awkwafina.

Friday, many attendees at the screening saw parallels between The Farewell and their own life experiences. Many did not identify as Asian American and Pacific Islander (AAPI), but saw in Wang’s story the breadth of a diaspora that separated them from their own family members.

They included New Havener Caprice Taylor Mendez, who as a young person migrated with her family from Guatemala to the United States. For years, Mendez and members of her family didn’t have documentation, and were unable to see family outside the country. That changed when they officially received asylum in the 1980s. Similar to Billi, Mendez was unable to travel outside the United States and visit her grandmother.

“As a Guatemalan immigrant I could relate to so many story lines happening with the main character,” Mendez said.

Another attendee who introduced himself as Doug found relevance in the dilemma of whether to reveal to a family member that they are terminally ill. Being “on the other end of the age scale,” he joked, the topic was one he could especially relate to.

The film and virtual talkback are one of Lunarfest's new offerings as organizers adapt to the second full year of the Covid-19 pandemic. In an interview before the film, Yale-China Association Director of Arts Programs Annie Lin and Yale graduate student Rosie Li both stressed that, at its core, Lunar New Year is about home.

“Lunar New Year for me is very much about homecoming,” Lin said. For about 10 days, China completely shuts down and nearly everyone goes home to see family.

In a holiday that is so rooted in in-person reunion and celebration, this year’s Lunarfest organizers took on the challenge of creating programming that brought New Haveners into community with one another while prioritizing pandemic-era safety. 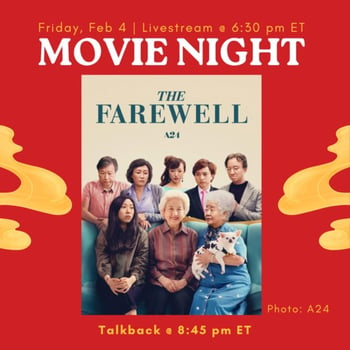 “What we’ve been trying to do with Lunarfest this year is not to try to replicate the rituals of past years but to build a new ritual,” Lin said.

Lin, who has been a member of Yale-China since 2011, recalled how people from all over Connecticut used to make annual pilgrimages to New Haven for the lion dance parade down Whitney Avenue. The February 2020 parade, held one month before the March 2020 lockdown, was the last time lions and dragons danced in the streets of New Haven.

That celebration had a different mood than previous years. In 2020, some people were reluctant to publicly celebrate when the people of Wuhan, where Covid-19 emerged, were experiencing so much pain.

“We were like, we can’t just like bang the drums and be like ‘woohoo’ everybody’s gonna have a good year,’” Lin said. “Because it was already so bad.”

This year, Lunarfest is reinventing ways of bringing people together, while also prioritizing community safety. While an exhibition at the Ely Center of Contemporary Art and in-person wishing tree at the New Haven Museum remain, there are a number of virtual activities on the calendar, including DIY craft sessions, Tai Chi, and a lecture on the roots of opera in Beijing.

Li and Lin have each also been creating new rituals in their own lives.

Li, who is from China and has been living in the U.S. since her undergraduate studies at Smith College, said that the past two years have been especially painful. Since 2020, Li has not been able to travel home and see her family. Instead, she has new ways of celebrating: video calling her family back home and making dumplings.

Lin’s extended family also experienced the challenges of reuniting. Unable to travel to visit relatives, they cooked fish from afar and sent red envelopes in the mail.

Lin added that the celebration of Lunar New Year has been different not only because of travel restrictions posed by Covid-19, but also the rise in Anti-Asian racism and violence. The March 2021 shootings in Atlanta, which killed eight people including six Asian women, was a turning point for many in the Asian American and Pacific Islander (AAPI) community in New Haven. Lin herself spoke at a vigil and rally in March of last year.

“That’s been weighing a bit heavily on some of us, not all of us, who identify as Asian or Asian American and definitely shapes the way I show up and the way I connect with other people,” she said.

It made Li eager to use Lunarfest as an opportunity to promote cultural exchange in New Haven.

“We’re trying to connect and build understanding all over New Haven,” she said, noting that co-hosing the event with NHFPL was one dimension of this outreach effort. “That is [a] very active move to invite people to celebrate with us and understand us."

"Especially this year we’re not just celebrating the year that’s going to come, we’re really celebrating ourselves as survivors of 2021.”

For a full lineup of Lunarfest 2022 events, click here.