Lunarfest, Banishing Fear, Dances In The Year Of The Rat 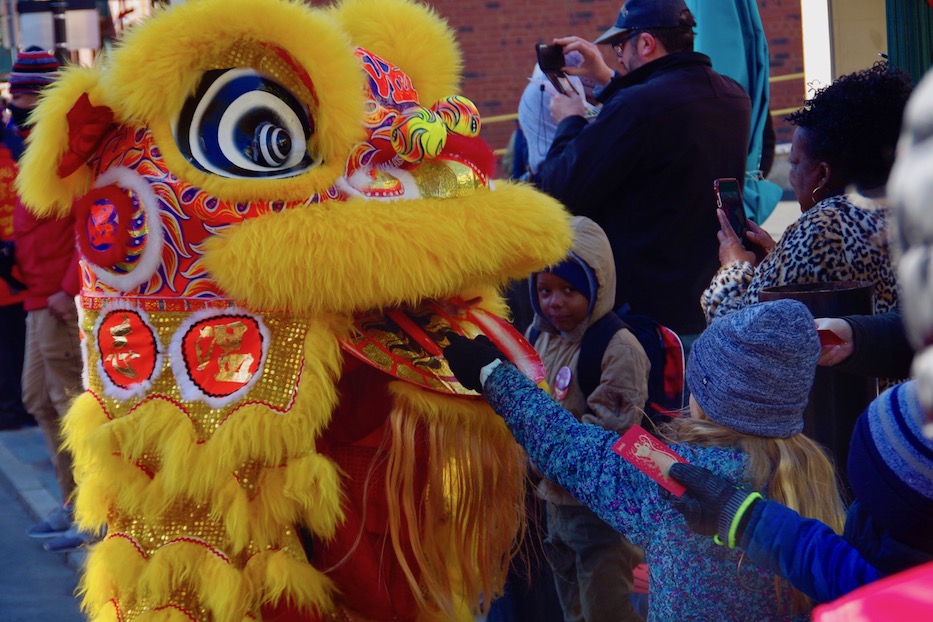 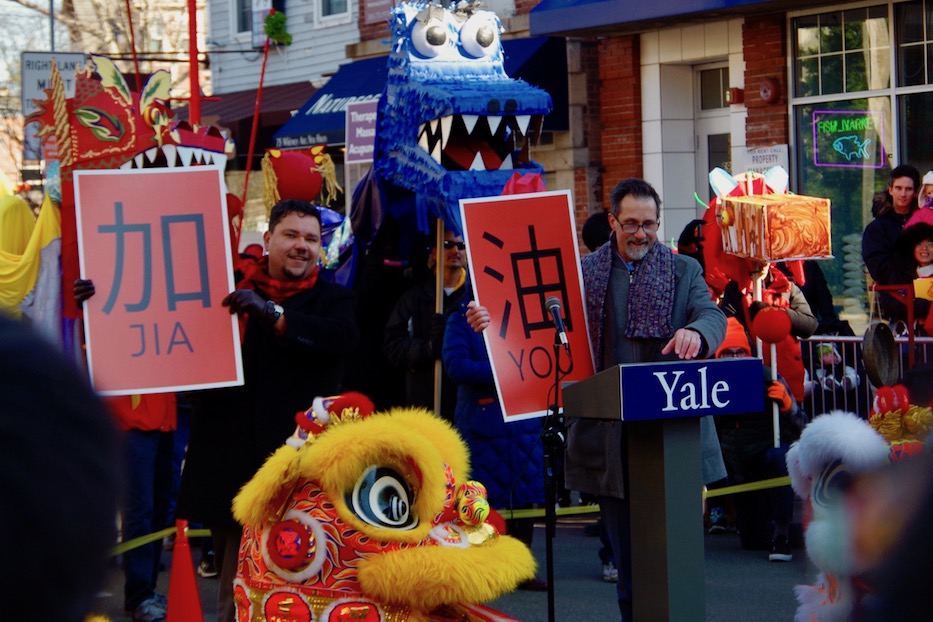 The lions, white and gold with thick patches of red, danced down Whitney Avenue. Hundreds of small hands appeared ready with hongbao, celebratory red envelopes filled with money. Kids were hoisted onto shoulders to soak in the action. At the end of the street, Yale-China Director David Youtz presented two huge cards printed in Mandarin with translation. “Jia,” read one. “You,” read the other.

The words, which translate roughly to “be strong,” were a message of solidarity from New Haven to its sister city Changsha, to the Wuhan Province, and to China more broadly. As China battles stigma, sickness, and widespread panic around Coronavirus, they came right on time.

Saturday morning, a call for unity and tolerance defined New Haven’s ninth annual Lunarfest as lions, dragons, and musicians danced in the Year of the Rat. The Lunar New Year celebration is organized by the Yale-China Association with support from the New Haven Museum, City of New Haven, Town Green Special Services District, Long Wharf Theatre and others. 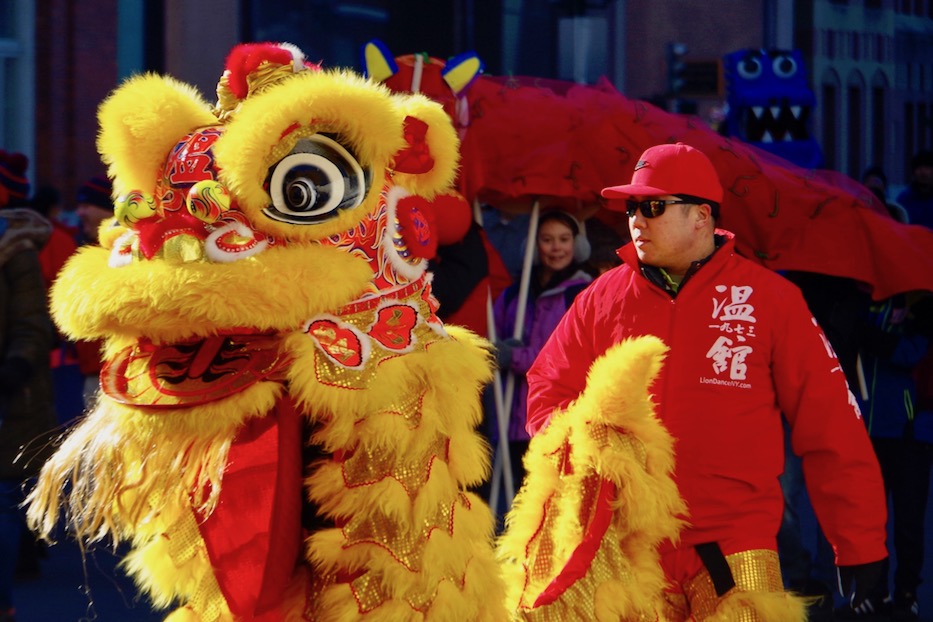 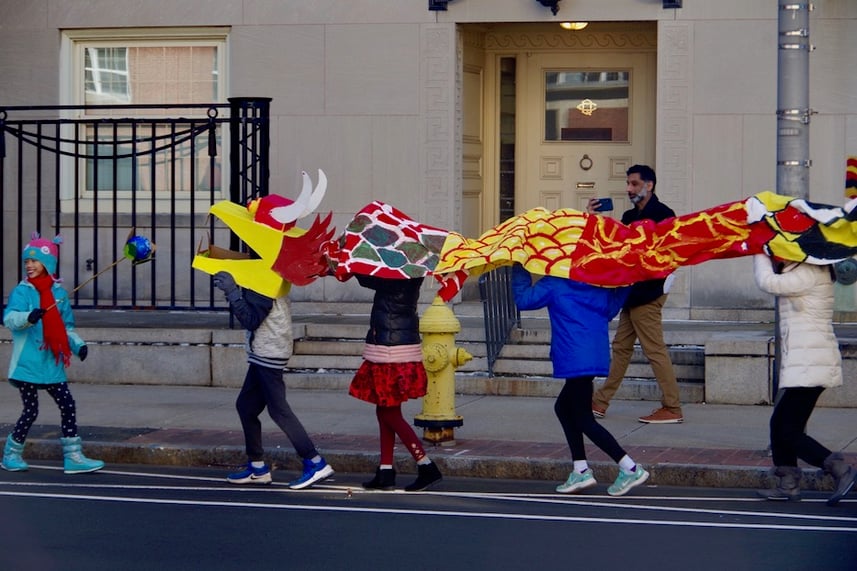 The parade began Saturday morning, as representatives of Yale-China joined city officials, arts leaders, and members of the Wan Chi Ming Hung Gar Institute for a propulsive procession down Whitney Avenue. Somewhere close to Grove Street, a suite of bright dragons winked out, back for a second year with the student artists who had decorated them. Attendees assembled on the sides of Whitney Avenue, cheering as drums and cymbals broke over the street.

The lions shimmied forward, moving in time with the instruments. Every few steps, they stopped to pick up hongbao, red envelopes that often come with a monetary gift inside. Stepping off the sidewalks, parents ushered their children towards the animals. Some were delighted to find out they could pet them; a few shrunk back in fear or surprise. There was no age limit on the hongbao festivities: plenty of adults hopped in on the action too. 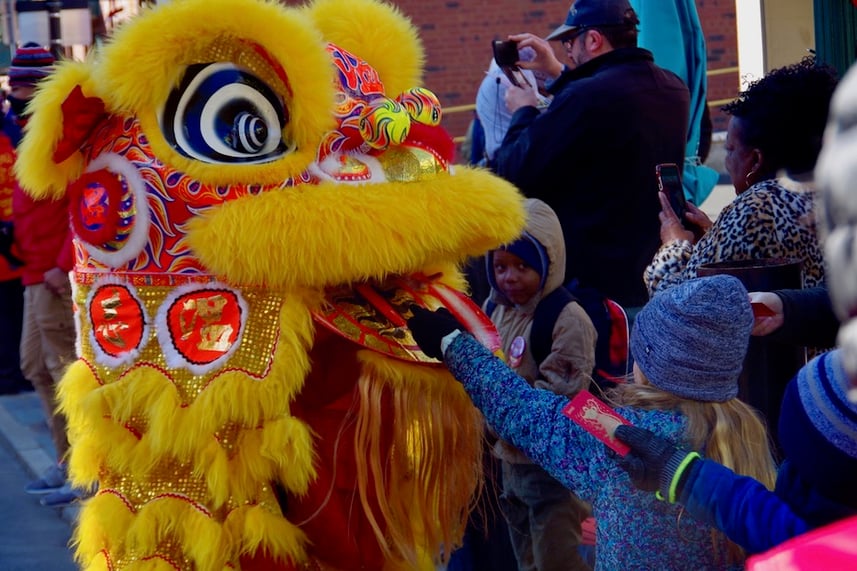 As the lions made their way toward Hong Kong Market and Great Wall restaurant—through which they often dance to bless the businesses—they settled at Youtz’ feet for a moment. Speaking to the crowd, he described the parade and celebrations as “a fun and vibrant splash of color in the middle of February.”

He noted that he wanted to “share aspects of China” with different communities, in order to make all New Havers more familiar with the customs and culture of the vast country.

Then he took a more serious tone, directing eyes to the black and red text that offered a message of strength for Chinese neighbors, friends, students and family in New Haven and in China. He held up one of the cards and led the crowd in the cheers of “jiayou!” voices rising in the cold air.

“As we start this New Year, our hearts go out to the people of China," he said. "We want to send a message to the people of Changsha—our Sister City—and to the people of Wuhan, at the epicenter of this crisis—to express our solidarity and to honor their bravery as they get through this challenging time. Jiayou Wuhan! Jiayou Changsha!”

He wasn’t the only one to do so. Newly-elected Mayor Justin Elicker, who spent time living in Hong Kong and Taiwan as a foreign service officer, delivered some of his opening remarks in fluent Mandarin. As he switched to English (“I’m so excited I just got through that!”), he spoke on the importance of events that bring New Haveners together to recognize their similarities and appreciate their differences. 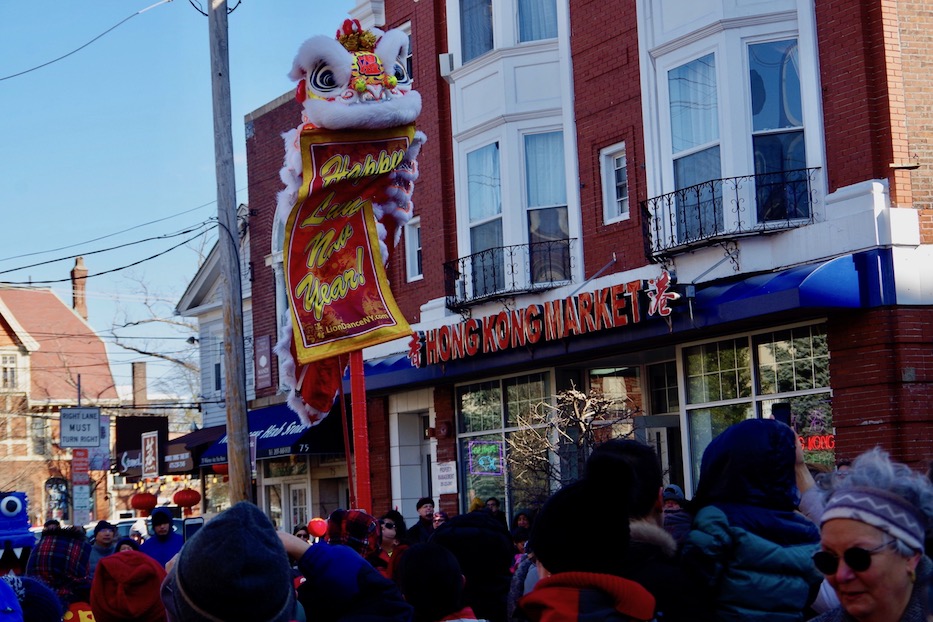 He also urged attendees not to give in to the fear-mongering and misinformation around Coronavirus, which has left families separated, hospitalized, quarantined and reeling from loss at what is supposed to be a celebratory time of the year.

“I just love any event in our city where we have a bunch of different people getting together,” he said. “If you look at what’s going on in Washington, there’s a lot of division. I support any event where people come together and realize we have more in common than we think.”

When speakers had finished, the lions danced once more, this time circling a pole until one started climbing. When he reached the top, Elicker lifted a pole with a head of lettuce to his mouth. The leaves rained down on the street.

While the parade ended around 11 a.m., the festivities lasted for much of the day. Inside the Ely Center, visitors wandered through Hong Kong In Poor Images, pausing before images of Hong Kong that were grainy and distorted. At the New Haven Museum, families practiced calligraphy and packed into the lecture hall upstairs to watch and learn the art of tai chi.

At Yale-China’s Temple Street headquarters, viewers spent time with the work of the painter Stephen Lowe, who created sweeping landscapes and intimate vignettes before his death in the 1970s. Many, shrouded in mist and fog, displayed the Chinese countryside in striking fashion.

To find out more about the Yale-China Association, visit them at their website.