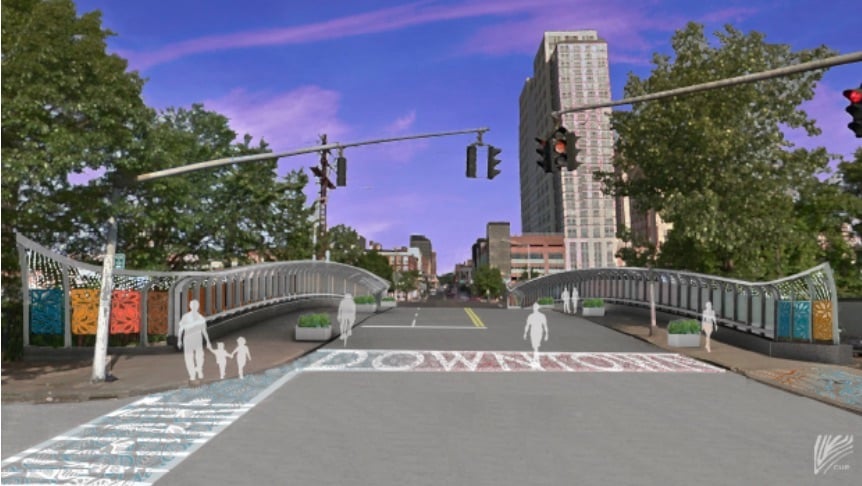 Are painted crosswalks, potted plants, and a brightly lit, colorful bridge enough to connect downtown and Wooster Square? What about a kiosk with information, for passengers just stepping off the train who don’t know where they are?

That’s the idea behind “Intersection To Connection,” a $250,000, three-phase plan from Town Green Special Services District and Atelier Cue designers Marissa Mead and Ioana Barac. After sourcing community input over several meetings in the fall, Town Green is hoping to begin the project by mid-April. The project is still pending approval from the city’s Board of Alders, and will need a permit from the department of Traffic, Transportation and Parking.

“There was a community consensus that there was a disconnect between Wooster Square and downtown,” said Elizabeth Bickley, Town Green’s manager of public space planning and development, on a recent walk through downtown. “We’re thinking about Chapel as a main artery through downtown. It’s the first impression that people have to the city.” 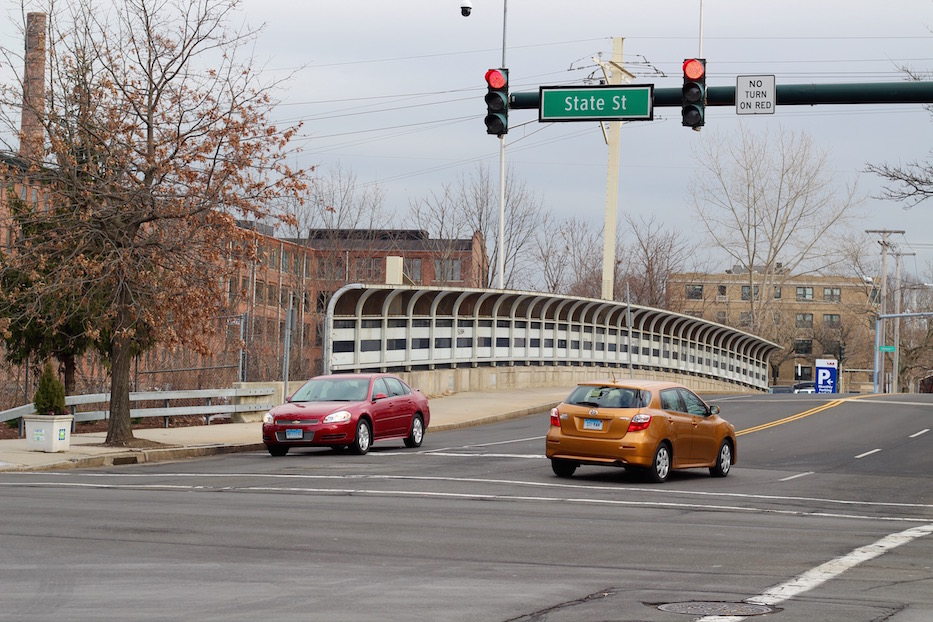 In current designs, “Intersection To Connection” is set to unfold in three phases, starting in mid-April. In part, Bickley said, she and Town Green have been thinking about how to right some of the wrongs that took place during urban renewal, which turned the intersection into more of a divider than a point of connection. She’s pinpointed April because the Historic Wooster Square Cherry Blossom Festival tends to bring thousands of people to Wooster Square and downtown for a single day.

In phase one, Town Green will be working with community members to paint the four crosswalks at the intersection. Each crosswalk will point walkers toward a different neighborhood: East Rock, Wooster Square, Long Wharf, and downtown. In addition, phase one includes the addition of 12 rectangular planters, for which Town Green has already planned to cover the cost.

With the change in the crosswalks alone, Bickley suggested, the area may start to feel like a more welcoming and navigable place. Pointing to the State Street Station, she noted that there’s no way to orient oneself in the city. Instead, a pedestrian or rail commuter may emerge from the station, look out at the cars whizzing by, and not know where to go or what businesses are in the area.

“How can we do downtown improvements that will help lift this ‘intimidating’ factor, so folks will feel empowered to hang out?” she said.

In phases two and three, Town Green will be seeking approval from the Connecticut Department of Transportation to install light art, colorful screens, and vinyl designs on the above-rail bridge that connects downtown to Wooster Square. Town Green is also aiming for a landscaped plaza and information kiosk next to the State Street Train Station as the final leg of the project.

On the bridge, Mead and Barac have included designs for programmable LED mesh atop the railings as well as brightly lit, designed panels to illuminate the path between the two neighborhoods. As a final step in the project, Town Green envisions placing a 1,200 square foot plaza with a space for cyclists and kiosk with information about the city. She said she is working with the city’s bike sharing program to figure out exactly what that might look like.

Bickley said that Town Green’s goal is October of this year, but that remains contingent on both approval from the city (phase one) and the state (phases two and three) and funding. As of now, there’s no timeline for state support. The Connecticut Department of Transportation has yet to give approval for two long-awaited public art projects also on State Street, an overpass mural at Bradley Street and permanent light installation from Atelier Cue between East Rock and Fair Haven. 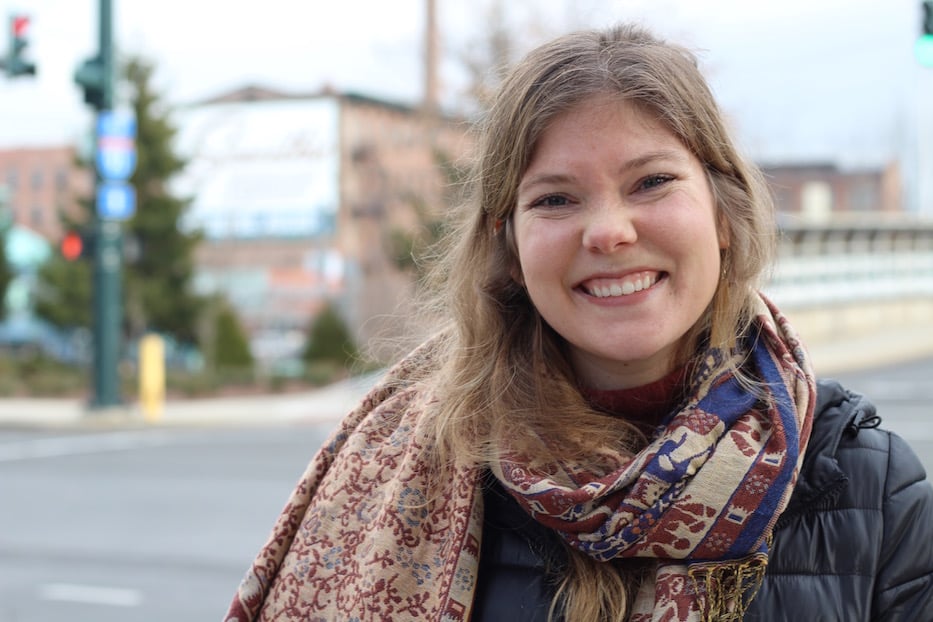 So far, Town Green has applied to both the Elm City Innovation Collaborative’s Could Be Fund grant program for $50,000, and to the Downtown Wooster Square Community Management Team for $20,000.

The management team is slated to vote on projects at its meeting next month. Reached by phone, Elm City Innovation Collaborative Director Michael Harris said he was looking forward to reviewing the submission.

If granted, the $50,000 would cover a portion of phase two improvements. The $20,000, which comes to the community management team through the Liveable City Initiative’s Neighborhood Public Improvement Program, would cover the costs of the “creative crosswalks” and vinyl designs for overpass railing in phase one.

Bickley said she has also been talking to several of the new developers in the area, which has seen a boom in luxury housing in the past years. In July of 2019, Boston-based Beacon Communities closed on the 335-unit, mixed-use building at Orange and Crown Streets, right in the hear of the Ninth Square. 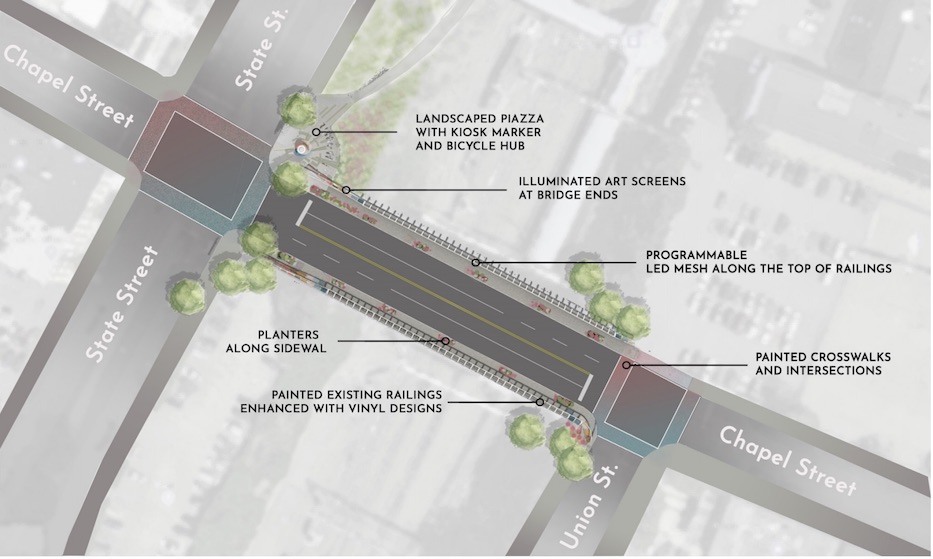 In December, MOD Equities secured approval to renovate a state street vacancy into 39 apartments just a few minutes from the State Street station. A new 230-unit luxury apartment complex is planned for Wooster Square. Another has already gone up on Audubon and Orange Streets, not far from where “Intersection To Connection” will be getting improvements.

“This [area] is the heartbeat of New Haven,” said Bickley, noting the number of small business owners also in the area.

The project joins ongoing efforts by Town Green, Ninth Square merchants, and small businesses downtown to make the area livelier, including the ongoing “Windowed Worlds” installations that Bickley has been spearheading.

In 2018, Town Green worked with Artspace New Haven to “Light Up Ninth Square,” placing light installations in empty storefronts. The same year, Bickley Mead and Barac for the first time at City-Wide Open Studios. She recalled talking to them about how public art could transform a space, as New Britain’s “Beehive Bridge” already has.

By February of last year, Atelier Cue had signed on to the project. In addition to several community input sessions, Mead and Barac unveiled designs at the “Night Market” in early October. Reached by email, both of them said they are excited to begin the project.

"One of the most inspiring aspects of this project was the level of engagement and support received from the community," Mead said by email. "In New Haven, people care about downtown, and care about how our public spaces effect visitors and residents. It has been energizing to witness a momentum building for these types of projects."

"Working with structure, art, light and color, carefully considered to enhance yet not overpower, we aim to transform what is now utilitarian infrastructure into an attractive urban landmark," Barac added in an additional response. "Add to these plantings, wayfinding, a linking node-plaza, and a plan to care for these – and we have a path to reclaim this ‘no-man’s land’ as a unique place of the city."