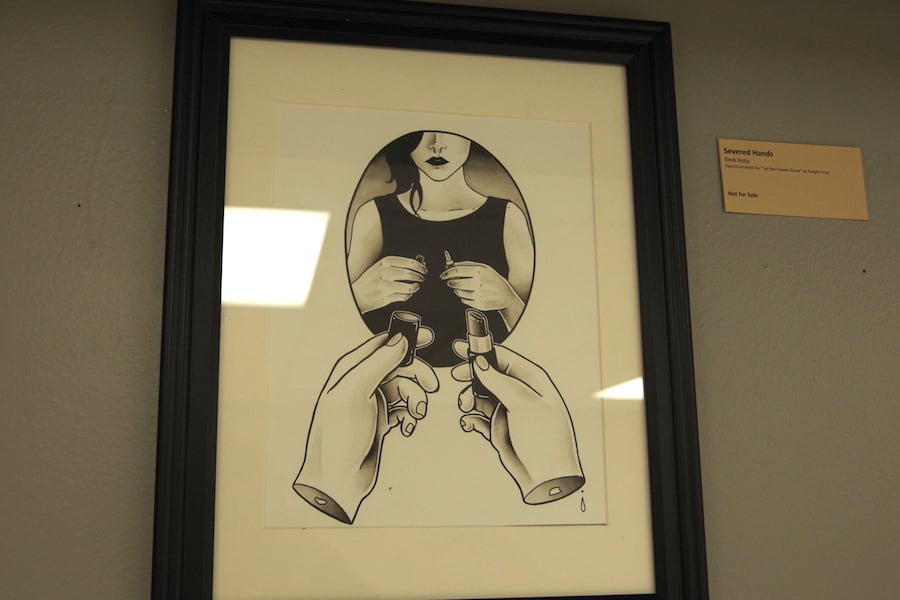 A half skull sits on the left side of the print, a little cartoonish but still fierce. On the right, in place of where the other half should be, is an smeared and oozing rainbow. A black night sky engulfs the two halves, save a few star-like details. There’s mystery there, in this other-worldly frame. But what is it trying to say?

This month, Sam Jannetty’s "Space Dust" joins close to 30 works in Won’t Be Erased, a moving group exhibition from artist and curator Beck Doty (they/them) now up at the New Haven Pride Center (NHPC). A tattoo artist in New Haven, Doty has used the show to explore the intersection of gender identity, gender expression, body modification and queer culture. The exhibition, which showcases the work of several local tattoo artists, runs at the NHPC’s Orange Street digs through June 30.

Within the show’s framework, tattoos are understood as permanent declarations of one’s identity, on view for the world to see. For those in the LGBTQIA+ community, Doty posits that these permanent pieces of art function as a visible declaration of where people find themselves in the community. That is, what their gender identity is, how their gender expression corresponds with it, and how they want to share that information with the world around them. 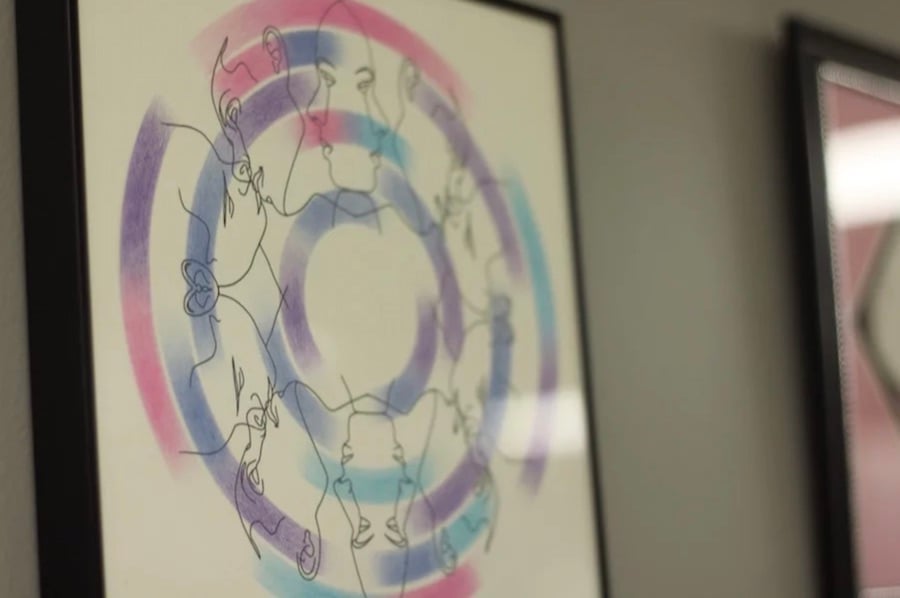 Through these modifications, community members are able to communicate and maintain their identity in a ciscentric and heteronormative society, where they are constantly being placed into boxes and given labels. In this way, tattoos and other body modifications are used in an act of empowerment to control the pain and trauma that goes hand-in-hand with bullying, misgendering, use of a dead name, and other forms of harassment.

In "Space Dust," the artist uses imagery and colors to portray feelings of curiosity and wonder like that of a child’s. The piece is reminiscent of childhood—those fuzzy velvet coloring posters that with the addition of color, always seemed to come to life. It is not just any color that oozes across the left side of the page—it's the rainbow spectrum, still light enough for the stars to show through. As the rainbow travels from red to pink, colors bleed into each other.

“Space” referring to the many unrevealed secrets that aren’t always clear to the blind eye, like the little dipper or a preferred pronoun. “Dust” implying that it could possibly be easily blown away as if it had not been there in the first place, like flower petals or the erasure of someone’s sexual identity. Together, they form a whole.

That’s also visible in Jannetty “Bleeding Color.” On the right foot of a white canvas shoe is a painting of a rag doll with a nail piercing its big red heart. Behind it, a rainbow splattered into seven different colors. The doll is torn and stitched up in various places, showing the struggle and damage it has suffered through its life. A number of needles stick out of its body, like a reminder of constant pain. Two buttons hover far to the side, as if they've been torn away or removed from the doll’s face. Where there should be large eyes, there are small X stiches in pink thread. 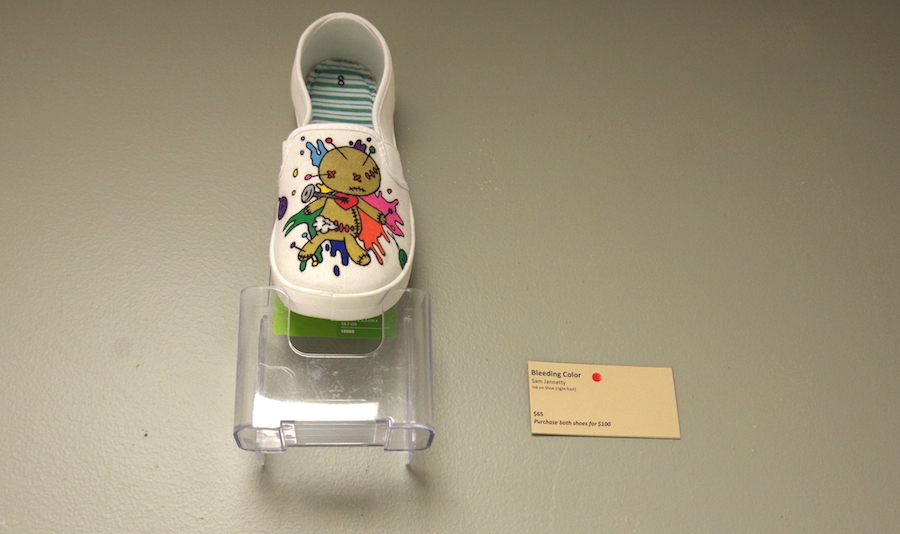 In the piece, it seems as though the doll belongs to someone bent on vengeance and pain. There’s a sense that its body, once whole, has been manipulated: stitches criss-cross its arms and legs, while one even reopens on its belly. It has almost certainly seen better days.

Meanwhile, pink, blue and purple are the main colors that draw you in and towards Nao Uchiyama’s “Love Wheel.” Around the circle are outlines of portraits of androgynous faces. Some are depicted kissing another while others are by themselves. The colors blend together as if this wheel is actually moving and it shows the circle of identity, life, and love; whether it be with another being or with oneself.

This piece seems like a representation of the way in which a single person can experience many different and diverse kinds of love with others—and of the relationship one can have with oneself. Love is unique to each individual and the way one can feel or express it has a certain kind of quality that is different than other beings experiences.

Other pieces probe at the delicacy of gender expression. Doty’s black-and-white “Severed Hands” shows a pair of severed hands holding an opened lipstick. The lipstick’s cap sits in the left hand; the actual lipstick is in the right. Behind the hands is a mirror with a female-presenting person in the reflection, shown from the lips down to the hands that are connected to ‘her’ arms.

Immediately, there’s a sense of discord—the claustrophobic feeling of one's appearance and overall reflection not matching one’s emotions or identity. It’s a loud disconnect, as if it is the viewer looking at their reflection, and almost not recognizing it as themselves. It gives the viewer an out-of body-experience, where they feel as though they are almost literally stepping out of their own shoes and into those of the artists.

McKenzie Belisle is a junior at New Haven Academy, interning with the Arts Paper for three weeks this May. The New Haven Pride Center is located at 84 Orange St. For opening times and more information, check out its website.