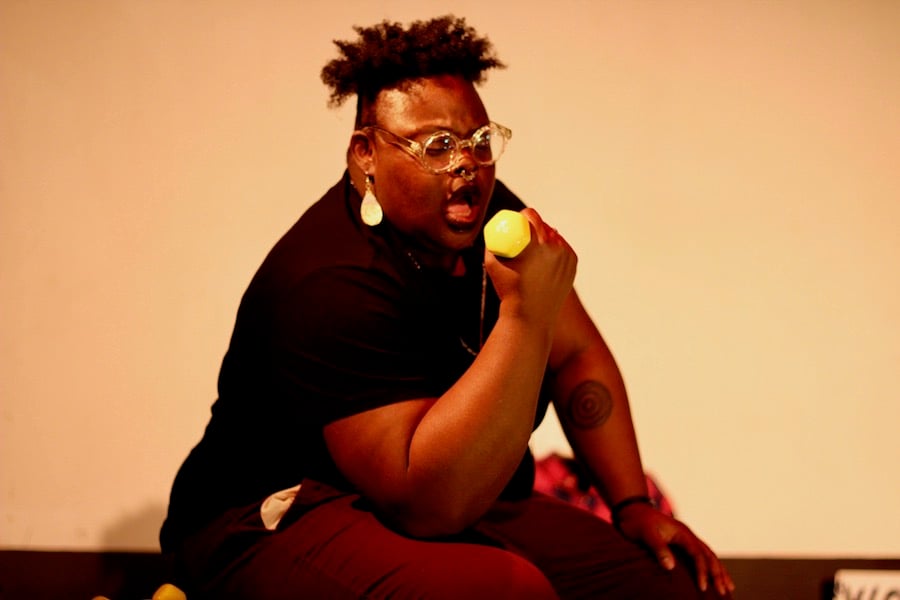 We are standing in a waterpark with Porsha Olayiwola and her lover. The sun is high overhead, warming their skin. It’s one of those exposed shoulder days, those thigh touching thigh days. One of those bathing suits are on and joy is permitted kind of days. And then, on the fourth waterslide, the attendant asks Olayiwola to get on a scale.

A wave of stomachs clench across the room. Audience members feel themselves kicked in the gut, winded by the words. On stage, Olayiwola keeps going because it is the only way to survive.

So unfolded Porsha Olayiwola’s Black & Ugly As Ever at Lyric Hall, where the Boston poet laureate performed her stunning, visceral and intimate choreopoem to back-to-back audiences Tuesday night. The event doubled as the kickoff to the New Haven Pride Center’s revived Center Cabaret series, part of a growing attempt to anchor queer voices—and especially queer voices of color—as the center expands its programming this year.

When the work opens on a Porsha-less stage, there are only hints at the heavy, wildly beating heart at the center of this show. Boris Gardiner pipes in over a minimalist set, where a headless outfit and shoes sits erect beside a sign that reads “Women/Are/Deformed/Men/Aristotle.” Just feet away, a boudoir table is ready with its oval mirror and empty chair.

Everything, it seems, is waiting for a warm body: the mirror and nearby tube of brown lip gloss, the sign with no hand to pick it up and carry it, the shoes that may never be filled.

Then Olayiwola enters from the side, turning away from the audience as her long shadow falls across the back wall. Slowly, methodically, a mother's warning curls in the edges of her voice. Olayiwola’s own cadence, low and strong, mixes in with a touch of Billie Holiday. It is silk and coal, the catch in one’s throat that comes for not a sniffle, but a wail.

“Stay out the sun, ba-by,” she sings, and we move to the edge of our chairs and hold our breath. We do not sit back until the end of the show. We can't—Black & Ugly As Ever is stunningly intimate, and we don't want to miss a second.

Tuesday night, Olayiwola presented her entire self to the audience, noting that “this is a live show, so we’re totally friends here.” In the theater, a few attendees laughed and shifted in their seats, no idea how true those words would become by the end of the evening. Back on stage, Olayiwola was recalling her mother’s own advice, a mix of pastel dresses and near-constant reminders to wear earrings.

In the show, she jumps back through her childhood and teenage years, pulling the audience in with almost umbilical force. We are with her in grade school, as she delivers her “third ass handling” of the year to a classmate with the lines “we opened our flesh red on the pavement/opened our teeth on the grass.” We watch as she travels to visit her father’s family in Lagos, Nigeria, her joy punctured as “the broad wall of my body” becomes what every family member has something to say about. We are brought to our knees as she apologizes to her lover for her shape and size, and angered as we become, from seats in the audience, the man who watches her eat on public transit or flight attendant who stares too long.

In Olayiwola’s truth, there is also laughter and candor, the kind that comes right from the gut. She chants “U-G-L-Y you ain’t got no alibi/you ugly!” and we cringe and yell and wonder if it’s okay to go along with it and then go along with it because everybody else is going along with it. She reads Octavia Butler and gets ready for the apocalypse on a treadmill, and we start thinking maybe we should too.

But the piece also conjures a palpable, throbbing kind of grief. Black & Ugly contains a war that the world is making Olayiwola fight largely on her own, for being “fat and dark and woman and woman loving.” The language, clean and clear as a bell, never lets us forget that. In one of the performance’s most powerful moments, she reads an ode to Viola Davis as Annalise Keating, her character in How To Get Away With Murder, removes her wig and makeup before confronting her husband. Her voice swells.

“To be yourself/To be dark woman, and coils plated, is to set fire/To the house/Is to sour/The porridge,” she read Tuesday. “To be yourself/Is to jeopardize your views. Is to be cast as Annalise Keating and show up/ As Viola Davis.”

“I walk around/Looking like the Viola from that scene,” she continued. “There is a woman/I love/And each night she lays with me she removes her wig/Rubs the color from her lips/And I tell her/She is beautiful.”

In this way Black & Ugly As Ever is not a poem about self-love or external validation, so much as a poem about being worthy of both of those. It is a poem about unlearning, then praising, that which the world has taught as undesirable: dark skin, layers of flesh and belly, love between any two people. Any loose ends in this show do not come from the material, but from the world in which that material exists, which feels like it still has a great deal of work to do before it can get on Olayiwola's level.

It is work, she added in a talkback Tuesday night, that is never completely done for her either. In the audience, attendee Sharon Brooks explained that she had been pulled in by the title of the show, the words standing out to her “like a math equation” where black equalled that which was not desirable.

“We won’t own black,” Brooks said. “And we don’t love black. So I hope you spread this everywhere. I hope you are able to take your message to kids and to the schools, because they need it most.”

“Every day is a struggle,” Olayiwola responded, noting that she sometimes gets homogeneous audiences who react differently to the material, and never knows what to expect from a performance. She said there's trauma there too—she will sometimes finish a performance, and then experience some of the bias and judgement she paints in the show.

“There is no resolution. Legit. It’s a constant being, a constant existence. It feels very real.”