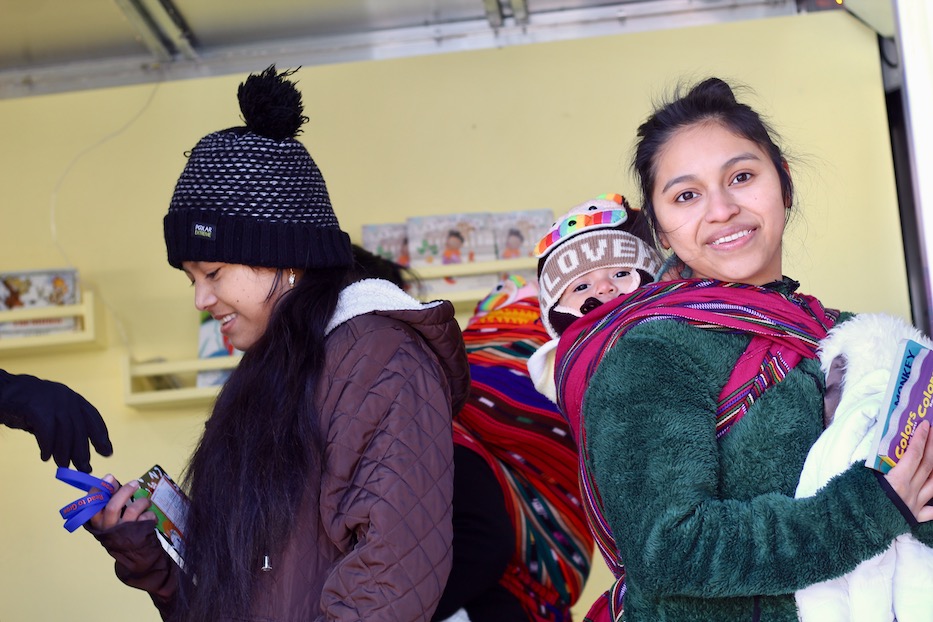 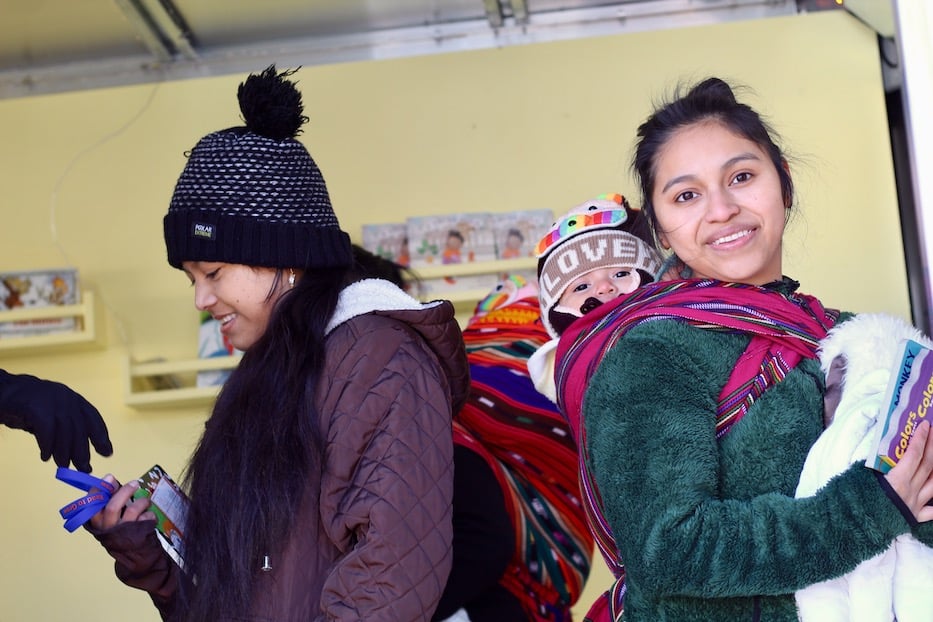 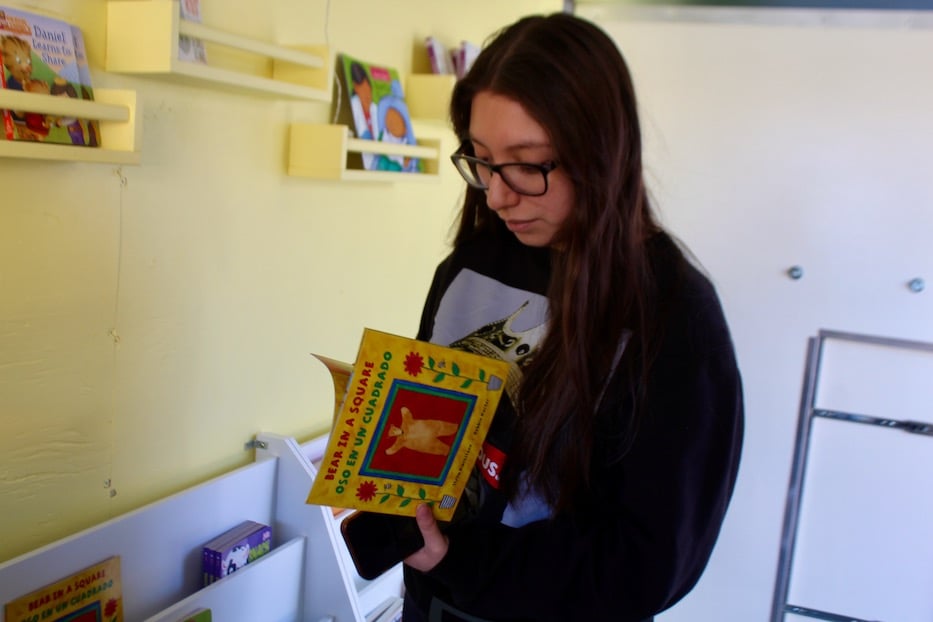 Alexa Astudillo looked over a cart of books, scanning the titles with a one-year-old cousin in mind. On a butter-yellow shelf, a baby on the cover of My Day caught her eye, and she lifted a copy to take a look. Close by, copies of A Veces Hola and La Granja beckoned in bursts of orange and purple, black and white. Before heading for the open doorway, she added a copy of Bear in a Square (Oso en un cuadrado) to her stack, and jogged back out into the December chill.

Wednesday morning, Astudillo braved the cold to visit Read To Grow’s nascent bookmobile, parked outside of Integrated Refugee and Immigrant Services’ (IRIS) food pantry at 75 Hamilton St. Over three hours, a steady stream of IRIS clients came by the bookspace-on-wheels, picking up an array of titles in English, Spanish, Pashto, Arabic and French. At IRIS, it dovetails with the organization’s goal of getting students to read in both English and their native languages.

“Books are one way that we are trying to make sure kids are just able to meet their literacy requirements, and be able to practice reading,” said Gladys Mwilelo, who came to New Haven from the Democratic Republic of Congo as a refugee in 2013, and now teaches in IRIS’ after-school program. “Not only practice reading in English, but also being able to connect with books that come from their own languages.” 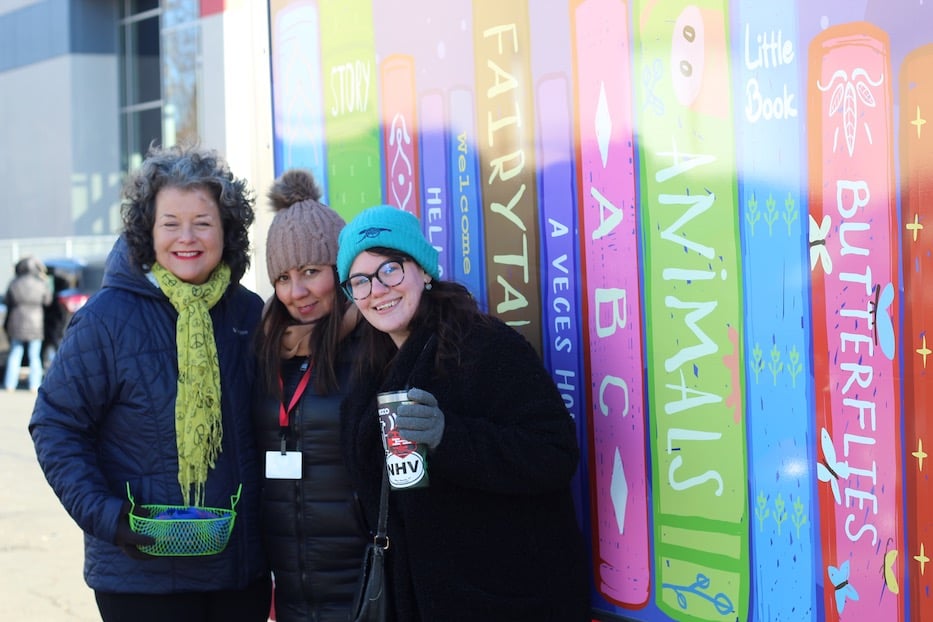 For Read To Grow, which was founded in 2000, the bookmobile is a long-held dream realized. In just over two decades, the Branford-based literacy organization has distributed over two million books to young readers and new parents across the state, connecting with some families from as early as birth. Despite relationships with 14 hospitals in the state and a growing number of “book places,” where parents can pick up free books, staff have long wanted to reach more kids.

“We knew we wanted to design a Bookmobile that would be striking and create a sense of excitement for children and adults and make them wonder about what was inside as well as be drawn to explore the books and resources inside,” wrote Executive Director Suzannah Holsenbeck in an email Thursday morning. She added that the team was “really inspired by many” existing bookmobile models, including the Black WorldSchoolers Book Bus in Indiana.

This year, the organization received $70,000 from the Centerville Bank Charitable Foundation specifically for a truck to do that. After securing the truck, Read To Grow worked with staff, young readers, and Connecticut artist Mark Gilchrist to come up with a design that could wrap around the outside, celebrating both the organization's mission and the books within. The final rendering features several of Read To Grow’s signature titles, with an eye-catching purple background. 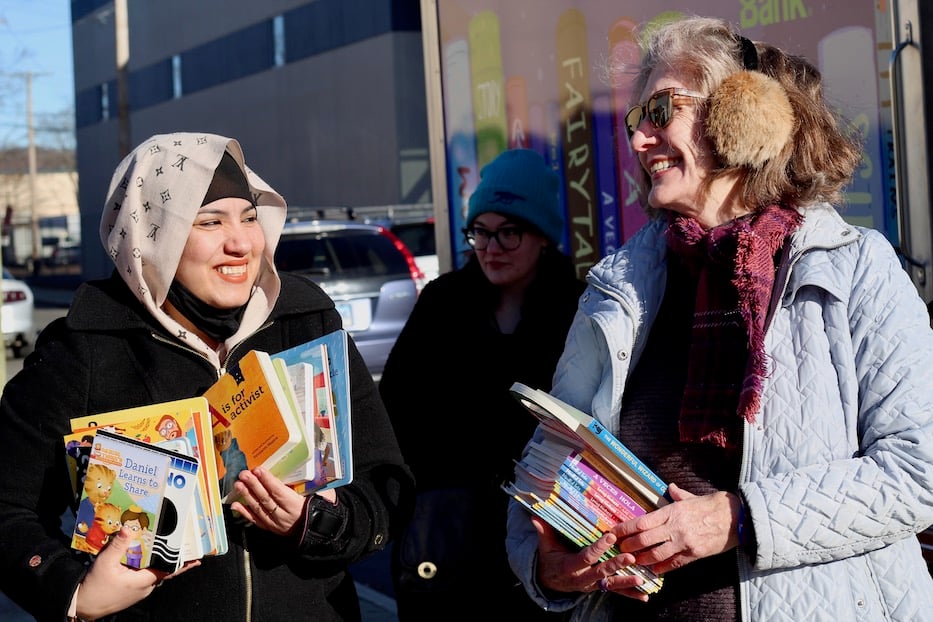 In September, it rolled into action in Norwich, with an inaugural visit to preschool students at Thomas W. Mahan Elementary School. Wednesday’s visit to the food pantry marked its first stop in New Haven.

Even as temperatures plunged into the 20s, a mix of parents, siblings, and IRIS staff stopped by to pick up titles for their kids, who range from as young as 10 months to 11 years old. One mom, who asked that her name and photo not be used, said she was glad to pick up books for her five-year-old daughter, who is a student at Cold Spring School.

Fifteen years ago, she came to the U.S. from Nigeria as a refugee, and has since made her life in New Haven. Sometimes, she said, she feels that people condescend to her, or act as though she should be grateful for secondhand items, because of  how she came to America. When she was choosing books Wednesday, she said, she could feel respect from Read To Grow’s staff as she perused titles for the right two.

“No matter your race, no matter who you are, we all want to get along and to and love each other,” she said. As she spoke, she clasped new copies of Five Little Ducks and Whose Tools? 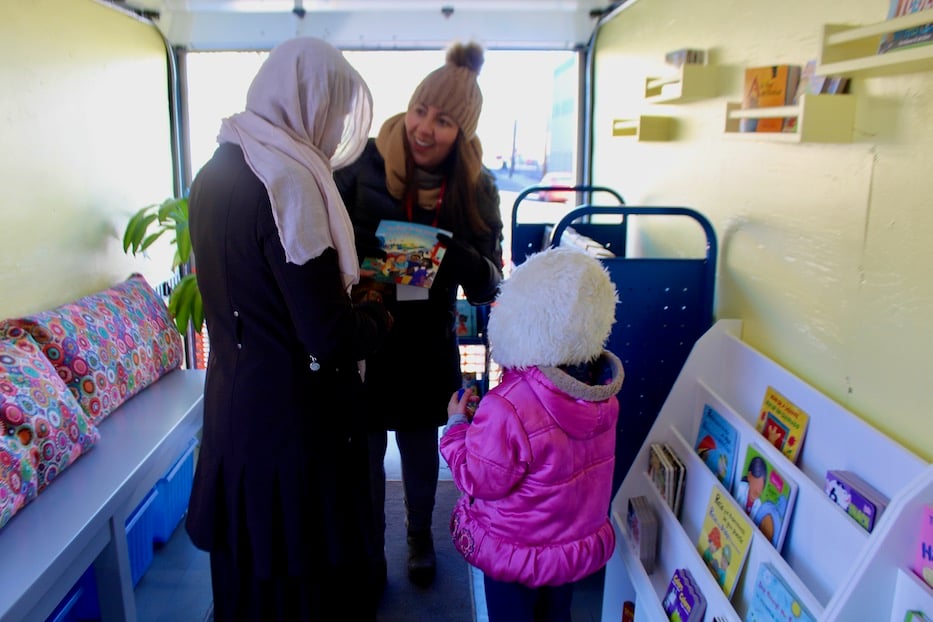 Nuñez with a mom and daughter.

Inside, young readers and parents alike marveled at the 91-square-foot book nook, which greets its visitors with butter-yellow walls, built-in shelves at multiple heights, potted live plants, and space for carts of books that staff can rotate in and out. Wednesday, titles included A Is For Activist, Bear’s Busy Family in Arabic and English, Hello Sometimes/A Veces Hola, Enzo y su Arte and at least a dozen others. On one side of the truck, a bench lined with cushions invited readers to sit and stay for a while—which they may have in more summery temperatures.

As she greeted visitors, Books for Babies Coordinator Laura Noe noted with a smile that the bench may get more use in warmer weather. Thursday, Holsenbeck said that the space is still evolving, and will likely soon include a ramp for increased accessibility.

For Astudillo, a student at East Haven High School, it was like stepping into a magic universe as her father Victor waited outside. The child of Ecuadorian immigrants, Astudillo was raised in Queens, and then moved to New Haven with her parents and younger brother in 2019. As a kid growing up in New York, she loved bilingual titles, but knew that her family couldn’t always afford them. “Every time that I would see books, they would be so overpriced,” she said. 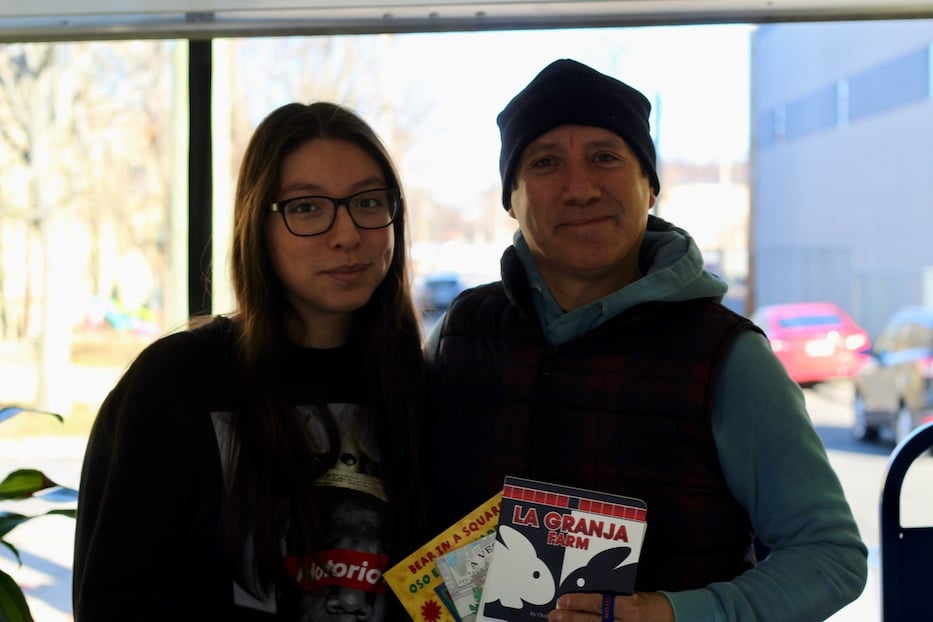 She got a steady stream of hand-me-downs from a woman her mother worked for as a babysitter, “which was nice,” she said. Still, she gets excited when she sees new books. There’s something about the clean, pristine pages and uncracked spines. Wednesday, she looked through titles with her brother and two young cousins in mind.

She giggled when she picked up a bilingual copy of My Day, and opened the first page to a wide-eyed baby gumming a spoonful of mashed potatoes. “I’m not that big of a reader, but I found books really interesting. They’re still something nice to have,” she said.

From her spot in the truck’s doorway, Read To Grow’s Viviana Nuñez encouraged her to take enough books for every kid in her family. As a Chilean immigrant, Nuñez said, literacy work in multiple languages is extremely close to her heart. “I can see how important it is,” she said. Since 2019, she’s worked as an an early childhood educator at the Family Academy of Multilingual Exploration. 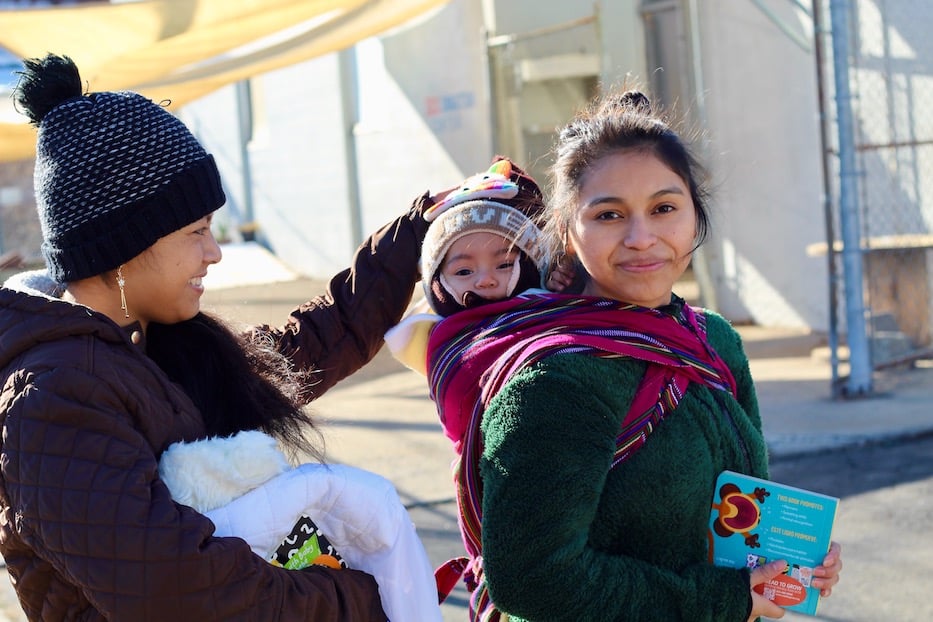 Minutes later, mothers Madeily Aguilar and Mary Mendez found books for their baby daughters, Daniela and Nayeli, as the infants looked on with wide, melty eyes. Two years ago, the two came from Guatemala to New Haven. Both said they are grateful for the help that IRIS has provided, and for the books from Read To Grow. As they headed into the building nearby, it seemed that the new titles might ward off the cold.

No sooner had they left then and Mwilelo and fellow teacher Fatima Hassan bounded up the steps, eager to pick up books for their students. At IRIS, the two teach between 30 and 50 kids in the organization’s after-school program. Students, who range from third to eighth grade, all have different literacy needs, Mwilelo said. As if on cue, she beamed at a copy of the book Loving Kindness that Hassan had picked up off the shelf.

"We are trying to practice kindness with the kids,” Mwilelo said. “They all have different cultures, but at the same time, through kindness, we are able to learn how to just be with each other." 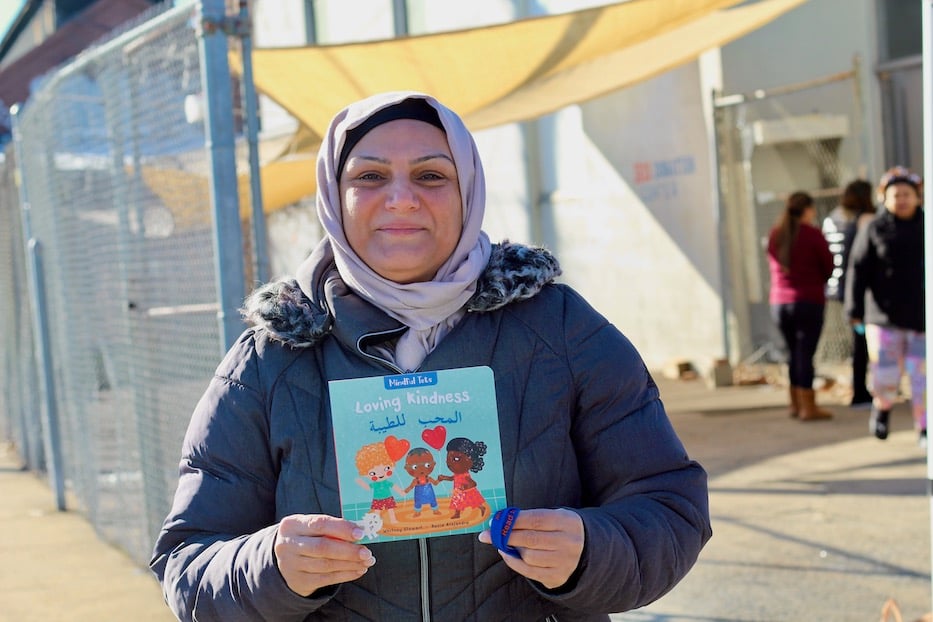 Nieda Abbas, an Iraqi refugee and co-executive director of Havenly, who picked up a copy of Loving Kindness in English and Arabic for her seven-year-old son.

Hassan, who came to the U.S. from Afghanistan when she was eight, smiled in agreement. Five years ago, she started at IRIS as a volunteer interpreter, primarily translating between English and Pashto (she also speaks Urdu and Hindi, and understands Spanish). At the time, she saw it as a way to give back: she and her parents came from Afghanistan as asylum seekers over two decades ago. The organization helped her find her feet, first as a student, and then as an aspiring educator.

The longer she volunteered at IRIS, the more interested she became in family literacy. A few years ago, she enrolled in a teaching residency program through the CREC Foundation. Then at the beginning of 2022, a teaching job opened up at IRIS. Wednesday, both she and Mwilelo said they were grateful for the bookmobile, which expands their existing partnership with Read To Grow. The organization already provides books to IRIS through its book request initiative.

Nearby, Madeleine LeStrange, an ESOL (English as a second or foreign language) instructor at IRIS, described herself as “blown away” by both the bookmobile and Read To Grow more broadly. Wednesday, she learned that the organization could provide up to 150 books for IRIS’ end-of-year bilingual holiday book drive. 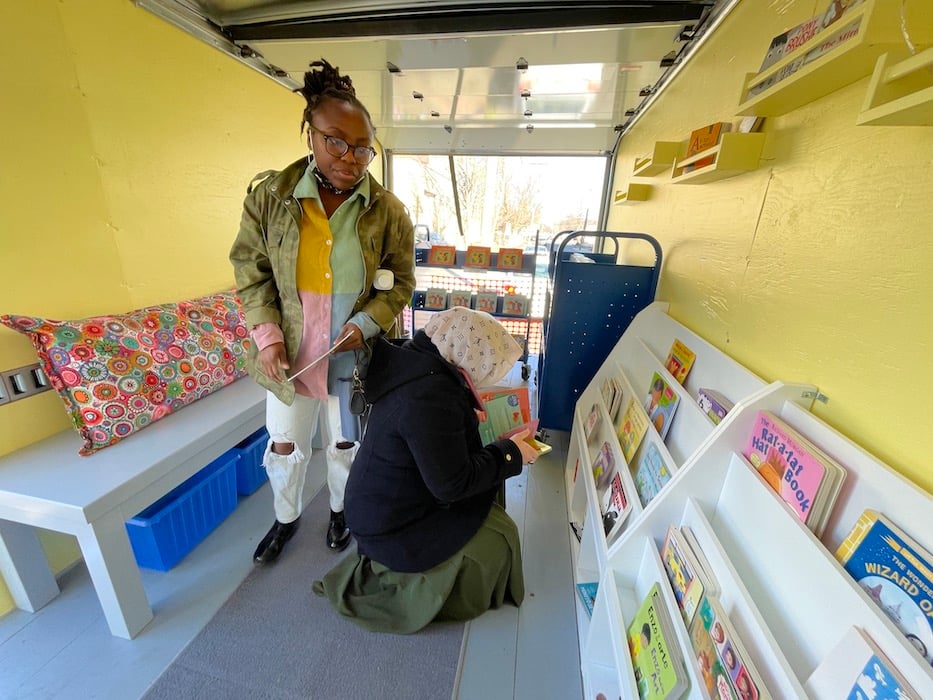 That's exciting news, she said—she knows firsthand how books can transform lives. Like Mwilelo, she stressed the importance of students not only learning English, but holding onto the languages with which they grew up before coming to the U.S. That seems particularly true this year, as IRIS continues to welcome Afghan families, and helps resettle the 300 Ukrainians who have arrived in the state since March of this year.

Back outside, Hassan looked for a bag in which to carry the armfuls of books she’s picked up. Copies of Daniel Learns To Share, A Veces Hola and Loving Kindness peeked out from between her fingers, the tips of which were turning red in the cold. As she chatted with LeStrange, her laughter cut through the brisk temperature. The morning felt bright, and full of possibility.