Brawlers Dance Away The Monday Blues 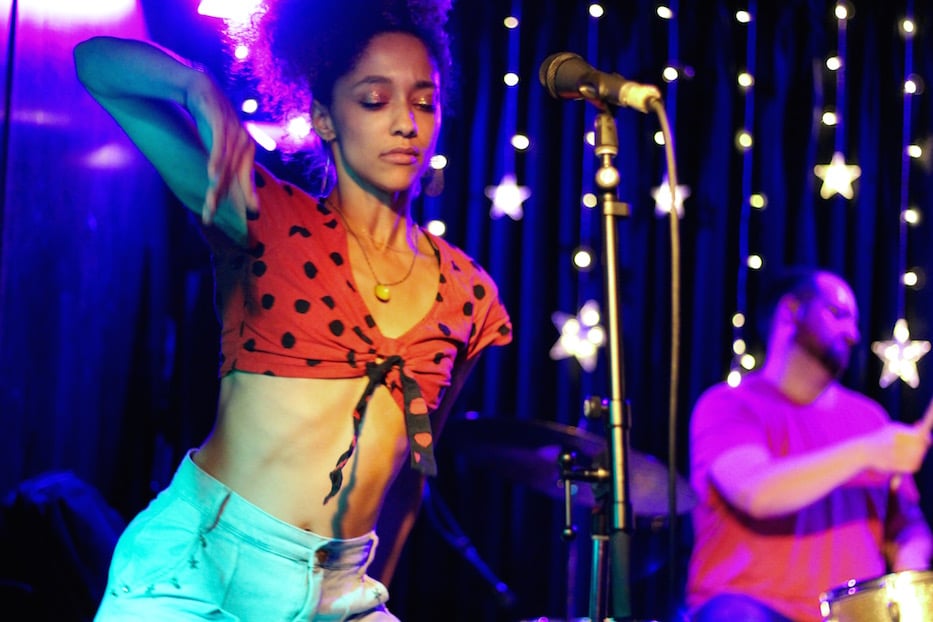 First Cafe Nine was a cozy living room. Then it was a jazz club suspended somewhere between Johannesburg and New Haven. Then an electric dance off, thrumming with blues, soul and earwormy West and Central African guitar. Every time it was magic, well before the clock struck midnight.

Monday night, a triple bill featuring Ro Godwynn, Thabisa, and Gentleman Brawlers pushed vocal limits, broke sound barriers and sonically shape-shifted at Cafe Nine. Both Godwynn and Thabisa are from New Haven; Gentleman Brawlers are from Brooklyn and a little bit of Queens (“but let's say Brooklyn, because it’s cooler,” said vocalist and keyboard player Becca Fox). A small but mighty crowd turned out for the show.

The night started quietly—literally—just past 8 p.m., as Godwynn took the stage in a wash of purple light. She smiled at the audience; she introduced herself cooly, her voice smooth and steady. She half-told, half-asked the audience for permission to sing, an announcement that was greeted with cheers and applause. Godwynn is a sort of stealth artist like this: she’s petit and calm, with a siren song that comes busting out of her, silver thread on a great, unending loom.

As soon as she leaned into the mic, the audience was bathed in vocals that rose and fell as easily as the tide, crested like waves, peaked with surprise, trembling whitecaps. As she cycled through her 30-minute set, the artist chatted effortlessly, jumping from her sartorial choices (a Black Lives Matter t-shirt that drew cheers and applause) to the sources of her songwriting.

She introduced one such piece with the story of a man who was struggling with housing insecurity, who kept mentioning that Godwynn looked like his sister during their discussion. As she sang, it seemed as though she was jumping between his voice and her own, a narrator who wanted to explore the limits of their own comfort, then jump beyond them.

But I am growing stronger/Feeling more determined
Than I think that I have ever been
I know I can’t stay here/But I can’t leave
Am I locked out or am I locked in?

Later in her set, Godwynn pulled out material from her recent EP, cool and collected as she reached over to her computer and adjusted some knobs that were halfway out of view. The room filled instantly in rich, layered vocals, keys and flute that mirrored the rise of her own voice. She pulled out surprises: recordings that turned her voice high and tinny, echoed as if they were in a cave, fell into poetic rhythm à la Jamila Woods.

Godwynn closed her eyes and pitched her head back just a little. “How much time do we have?” she yelled to the back of the bar.

“We got time!” yelled Thabisa from the front before the timekeeper had a chance to reply. The audience laughed as Godwynn headed into the final seven minutes of her set, lifting the audience up with her piece “Patience” (she added a special intro urging attendees to tip their bartenders, "they've been working hard for you!") before she left that stage.

Bt the night was just getting started. Carried by Godwynn’s vocals—she praised her as “hashtag lit … is that how you say it?”—Thabisa slowed the concert down and also heated it up, blending her own repertoire with the stylings of South African artist Miriam Makeba.

From a quiet, soulful start with her own “Diva From The River,” she stepped back, giving each musician a chance to solo. Around her, they shone brightly: Myke Ross on guitar, Tim Kane on trumpet, Sam Oliver III on drums and Jim Lawson on bass. As they played, Thabisa eased her way off the stage and into the audience, dancing as the microphone’s cord coiled around her like a charmed basilisk.

Back onstage, she slowed it down further, edging into Mama Miriam’s hallowed territory with a long, sinuous version of “Ntyilo Ntyilo.” Her voice turned to a bellow, reaching the low floor of her throat and lungs before climbing back up again. Around her, Cafe Nine transitioned from a living room to a jazz club, pulling listeners in at the ribcage and heart. Kane eased into a deep solo, the trumpet bending to its sultriest edges before returning to a sharp cry.

From the back of the bar, the artist got a five minute warning and launched into her song “Eyodidi,” which is sung in her native Xhosa. She turned it into a dance party, breaking for a shoulder-shaking interlude with Fox in front of the stage before coming back on to lift her arms in time with trumpet and bass. Her voice coasted high and then swooped back.

Even as she left the stage, she was ready to keep dancing. As members of Gentleman Brawlers set up their equipment, Becca Fox approached the mic, lifting her arms and wiggling her hips from side to side, ready to get the party started.

And from the first song, the group was on fire. Launching into their set, Fox turned into a blur, moving her shoulders as Matt Walsh jammed beside her on guitar. Fox let her feet pound against the floor; she mimed driving a car, she lifted her knees and then crouched down to take her dancing to the stage, relying on her thighs, arms and hips. She went airborne, half-vocalist and half bird, swooping back onto the mic right on cue.

Around her, the band soaked Cafe Nine in funk, psychedelic fuzz, and reverby goodness, spinning Thabisa’s jazz club vibe into a full out dance party. In the crowd, a few attendees danced on the edges of the floor, bobbing their heads and shaking their shoulders.

“We’re gonna slow it down!” Fox announced just moments later. But for the group, even slowing it down was just a slightly different version of propulsive. As Trevor Brown and Jeremy Warren jumped in on bass and drums, Fox and Walsh showed the audience that they weren't really planning on slowing it down at all.

They sped it up again and rotated through their discography, Fox joking along with the audience on “My More Successful Ex-Friend” (“I feel like we all have one,” she said to laughs and cheers of agreement) before turning back to a kind of unbridled, flight-bound dancing as her language of choice. As the group dove into "Vibrate On," it seemed that the whole venue was vibrating along with them, just a slight, guitar-flecked undulation of the floor.

“Who wants to dance with me?” she asked as the hour grew closer to 11 p.m. A beat, and no takers had joined her. Then slowly, Robin Ellington made her way to the front, followed by listeners one by one. A grooving, gyrating circle grew until more of the bar was dancing than was not.

And then, just as suddenly as Fox had jumped into the crowd, she jumped back on stage as the band transitioned to the very funky “Under The Stars.” Pared down without the band’s horns, Fox sang right to the audience

Outside, the sound spilled onto the sidewalk, drawing a few curious peeks from walkers who passed by. Inside, the band had almost reached the end of its set, and showed absolutely no sign of stopping.