Justice, With A Side Of Harmony 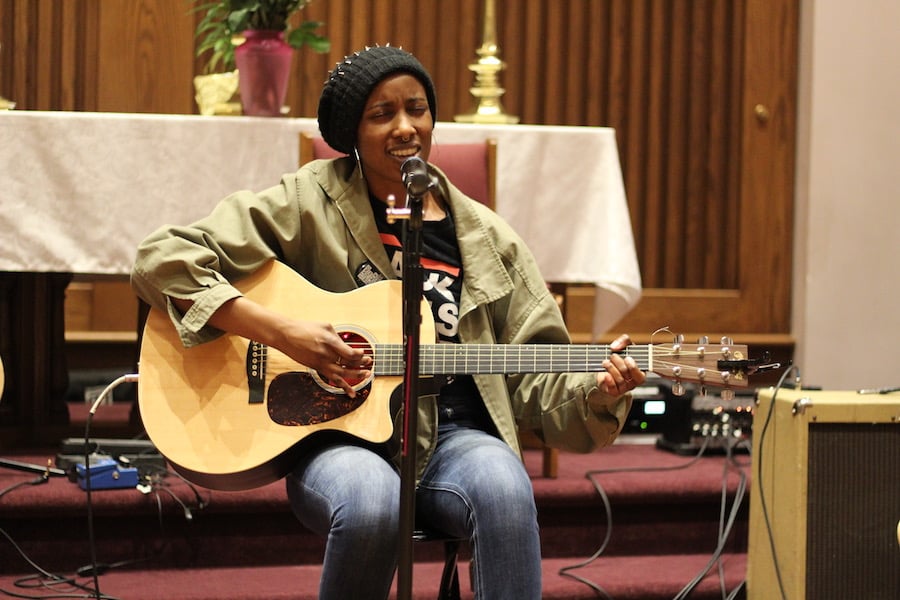 Black women have been leading a rallying cry in the New Haven and Hamden streets for two weeks. Sunday, some of them brought it into a church—and gave the community a moment to breathe before another week of protests.

That was the story at First and Summerfield United Methodist Church Sunday night, as poets, singer-songwriters and musicians turned the sanctuary into a holy, healing stage for “Songs of Justice, Songs of Freedom,” a concert to raise funds for Stephanie Washington and Paul Witherspoon two weeks after an officer-involved shooting left Washington hospitalized. The show, organized by musician and Elm City Vineyard member Ruth Onyirimba, raised a total of $789.12 for the couple.

On Sundays, the sanctuary is shared by First and Summerfield and Elm City Vineyard, leaders and congregants of which have been at protests almost every evening. Onyirimba also encouraged attendees to write down prayers or notes of support to the couple on index cards that had been placed on each chair before the show. 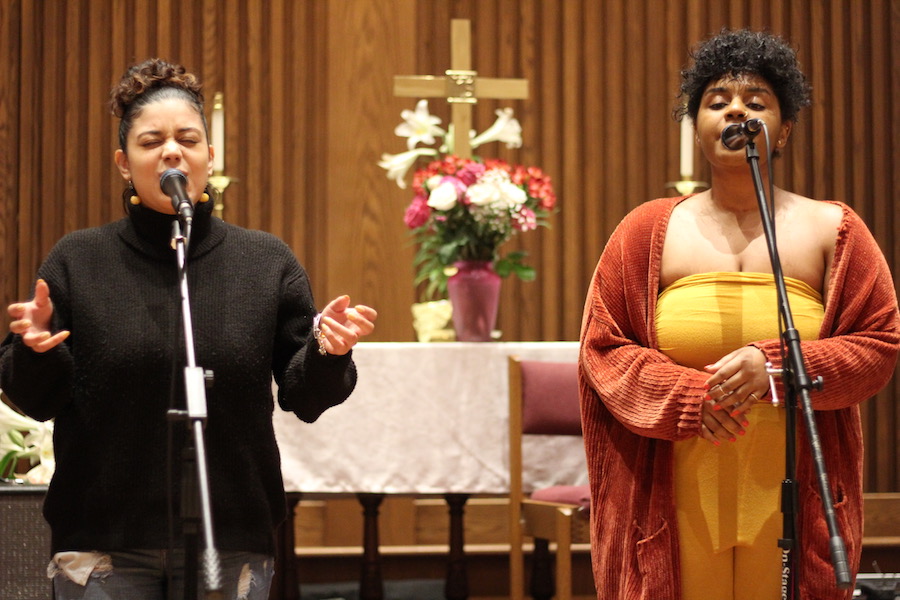 The event follows the officer-involved shooting of Washington and Witherspoon in New Haven’s Newhallville neighborhood on April 16, since which there have been near-nightly protests led by People Against Police Brutality, Black Lives Matter New Haven, the Party for Socialism and Liberation (PSL), Justice for Jayson, and the Connecticut Bail Fund. A participant in those protests, Onyirimba said she wanted to create an event that was accessible to both protesters who need to recharge and to those who support the protest efforts, but are physically or emotionally unable to attend.

“Let’s talk about art as protest, first of all,” she said midway through the show, sitting for what was one of the only times in the evening. “Things like song and music can be used to put forward a point. But protest as art is also a thing. Art is something to be experienced, interpreted. The very act of yelling is an act of catharsis. And words hold power.”

“I do feel like being vulnerable … it’s hard work but it’s necessary work,” she added. “It’s a necessary sacrifice. I think it’s hard for people to express hope, or fear, or even faith.”

She praised the Black women who have placed themselves on the front lines in not only the past weeks but the past several years: activist Kerry Ellington, photographer and political organizer Arvia Walker, Black Lives Matter New Haven Co-Founders Ala Ochumare and Lauren Pittman or Sun Queen, and Ashleigh Huckabey, who Onyirimba has nicknamed “Sage Bae” for her daily ritual of burning sage at sites of protest, and others. For Onyirimba, Sunday was about both honoring and adding to those voices.

For almost three hours, community members stepped forward to do just that. Performing twice during the evening, poet Yexandra “Yex” Diaz preached an end to police brutality, her poem “Can You Taste It” shaking the audience into being. In the poem, Jesus has shown up on her doorstep in a pair of converses. His hair needs untangling. He’s tired at the state of the world. She is too.

In my hood, pigs don’t fly/They walk upright
Beating deities in broad day for simply being as
Quiet bystanders watch like a play on Broadway

As she performed from memory, each word bouncing through the sanctuary, attendees leaned forward in their chairs and offered responses of mmmm, yes yes and snapping fingers. A few latecomers trickled in and found a spot by the back. Diaz’ voice rang right to them, a bell, and kept going.

Spoken word artist, social justice advocate and healer Hanifa Washington swept to the front of the church to sing from her album Mantras For The Revolution, which she released in 2017. In her own life, Washington told attendees, she cannot go to protests; there is too much trauma there. Instead she is present in her work, almost all of which is centered on social justice initiatives in New Haven. She called the configuration of attendees, which bridged Yale, non-Yale, protest and faith communities, “history in the making.”

“I ask you as you’re singing this song to remember your heart in this revolution—the one revolution that we’re all spinning around the sun,” she said. “In this revolution, in this moment in New Haven, the work that we must do. And to remind ourselves to keep breathing.” 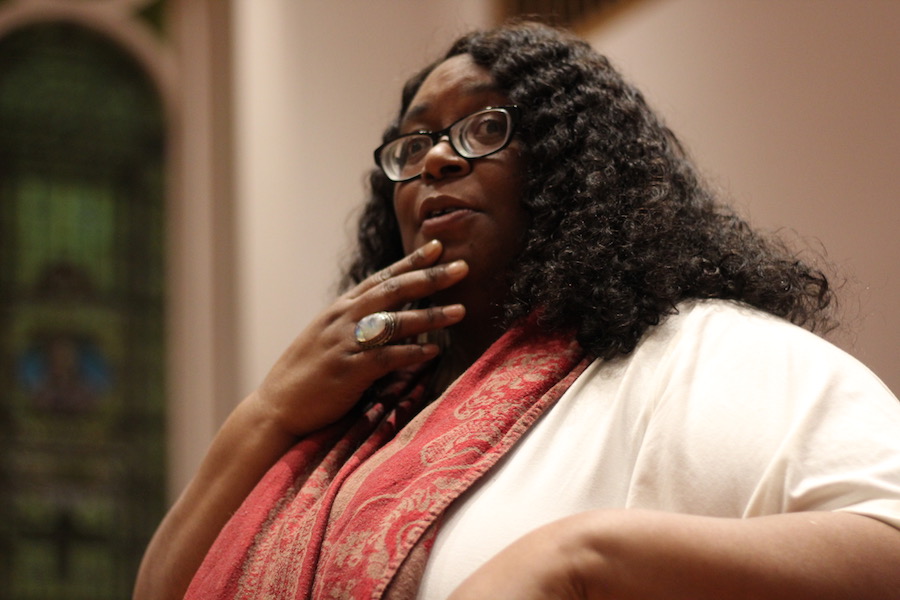 As she sang, her voice filled the church and wrapped around its rafters and pews, the rows that the audience had filled in and the seats that were still empty. After singing one verse all the way through on her own, voices from the crowd joined in, splitting into two and three part harmony as the space filled with sound.

“That is our work here,” she said. “To anchor love. And to do that we have to keep breathing. We’ve gotta keep remembering that that is the thing that we’re all doing. We’re all breathing in and breathing out. It’s medicine and it’s free. And we must speak truth—to ourselves, to our family members, to our transgressors, to our children, to our grandparents, to the future.” 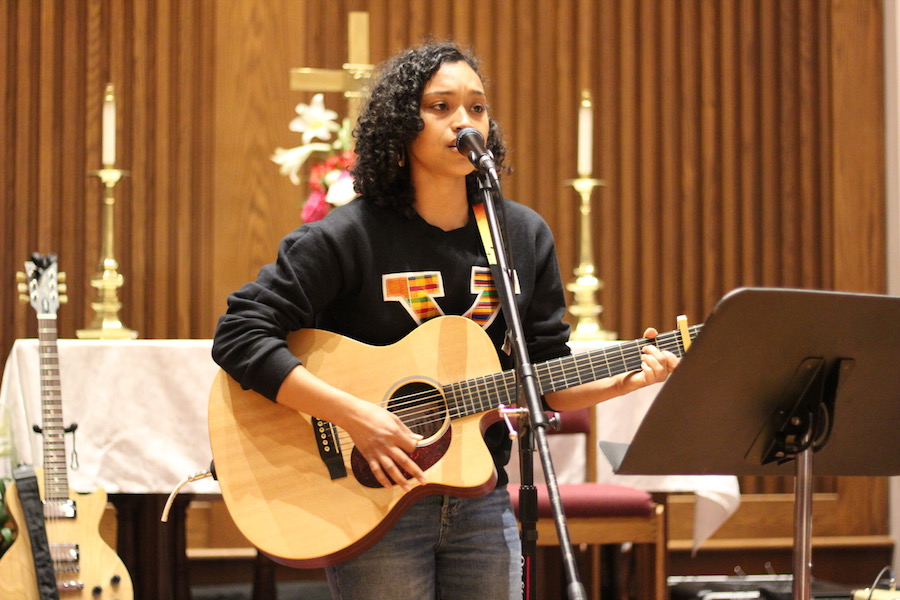 Other artists sculpted performed work to both galvanize attendees and give them space to heal, some of them ready with words that seemed meant for a higher power. Taking the stage with her guitar, Yale University senior and Elm City Vineyard member Me’Lena Laudig covered Jamila Woods’ powerful “Black Girl Soldier,” her voice slowing and catching on the lyrics “look at what they did to my sister/last century last week.”

Singer Dee Davis looked out to the crowd as she sang the refrain “No more pain, no more pain” like the holiest of benedictions. In a new song that got the audience clapping, Loveland Richards vowed to march on “until freedom truly rings.”

The Let Loose took the audience to church as seven members built a full band onstage, sending their words skyward as they praised the power of love. As they sang, attendees became willing members of a new sort of congregation, clapping in unison and responding with cheers of “come on!” 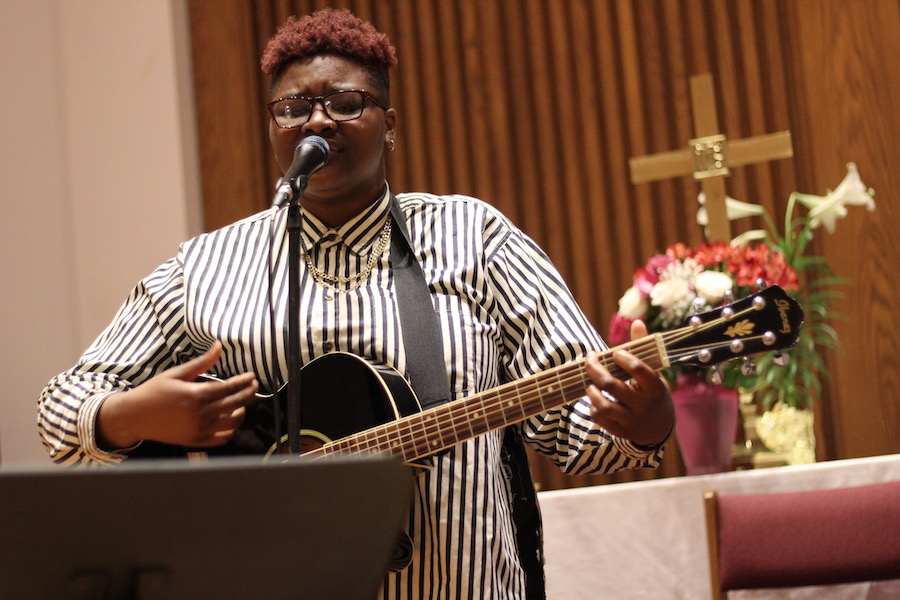 Taking off her hat as emcee and organizer, Onyirimba wove “We Shall Overcome” with an original piece of her own, based on a conversation that she had with a homeless man several months ago.

I don’t want no handouts, just need some time
This conversation seems so familiar/I want to do this my way
I don’t know how much longer I can do this on my own

It was one of many times in the evening that audience and performer, for sometimes only secords, seemed to become one and then bounced back into multiple people, all bound by song. Salwa Abdussabur turned the evening into breath itself as they took a seat at the piano bench, and introduced a “conversation with a higher power, with the universe” that they have started repeating to themselves when they feel emotionally and spiritually displaced.

Don’t leave me behind! I swear I try
I’ll hold on to blue skies/Let the rain baptize me

“After marching and protesting for so many days, it took so much of a toll out of me, and it made me value my ability to speak,” they said. “I could not speak for an entire weekend. I could not sing for a whole weekend. And I would have to sit in my silence and my internal chaos, and it made me really value what it means to be using your voice and be out there.” 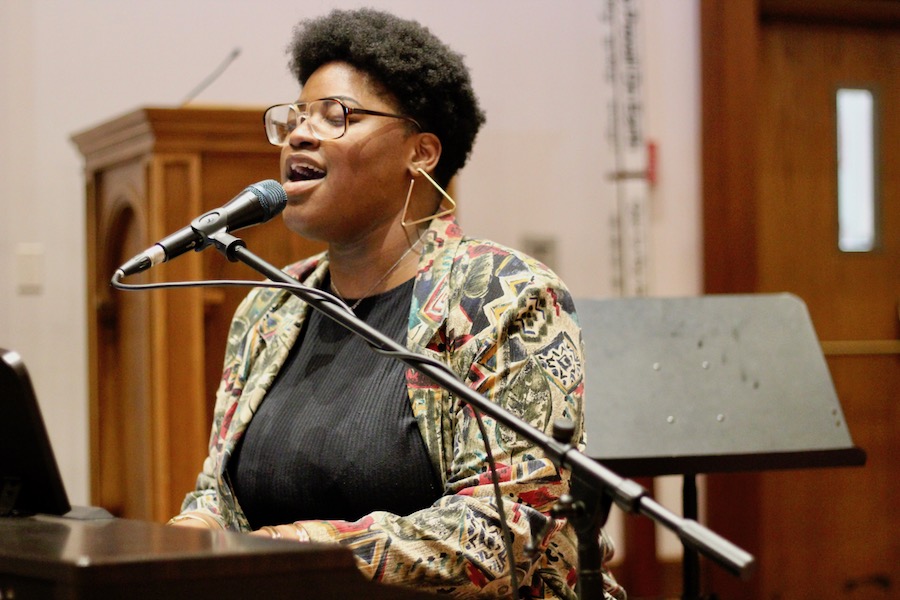 Coming to the front of the church as “one-eighth of The Art of Huckleberry,” musicians Eric Rey and Finn Wiggins-Henry made good on Onyirimba’s promise that they would blow the audience’s edges clear off, Wiggins-Henry knitting “Wade In The Water,” “Ain’t Gonna Let Nobody Turn Me Around,” Beyoncé’s “Freedom” with a voice so forceful the church could barely contain it.

The night, like many of the protests, also included song as a powerful call-to-action for some attendees to use their whiteness as a shield for protesters of color who may be at higher risk of violence from law enforcement. Closing the evening with a sort of prayer that became a soulful call to action, musician and health coach Jessy Griz asked the audience what it would take before people became collectively involved in fighting for social justice.

To watch and hear more from the performances, click on the video and audio below.