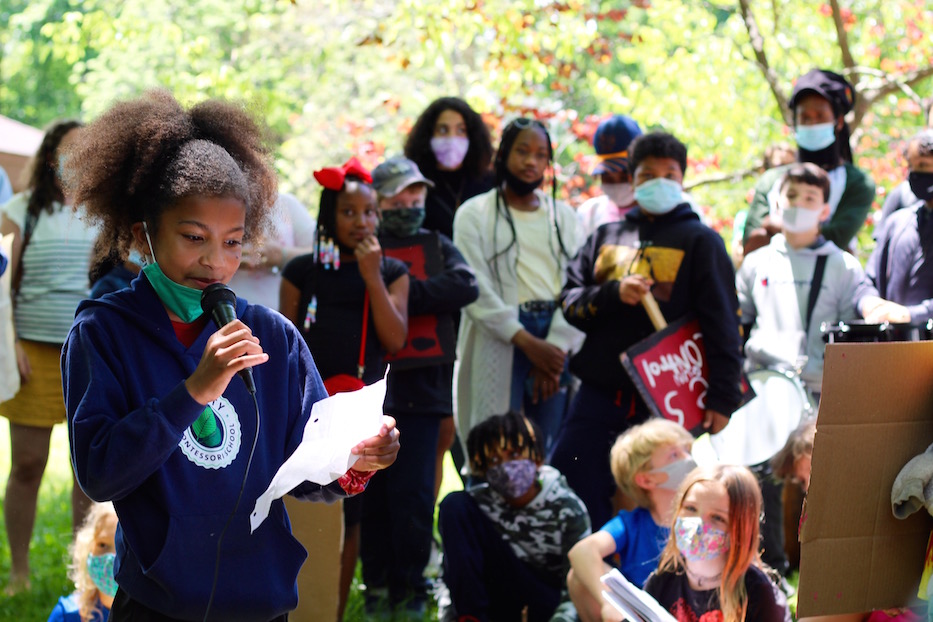 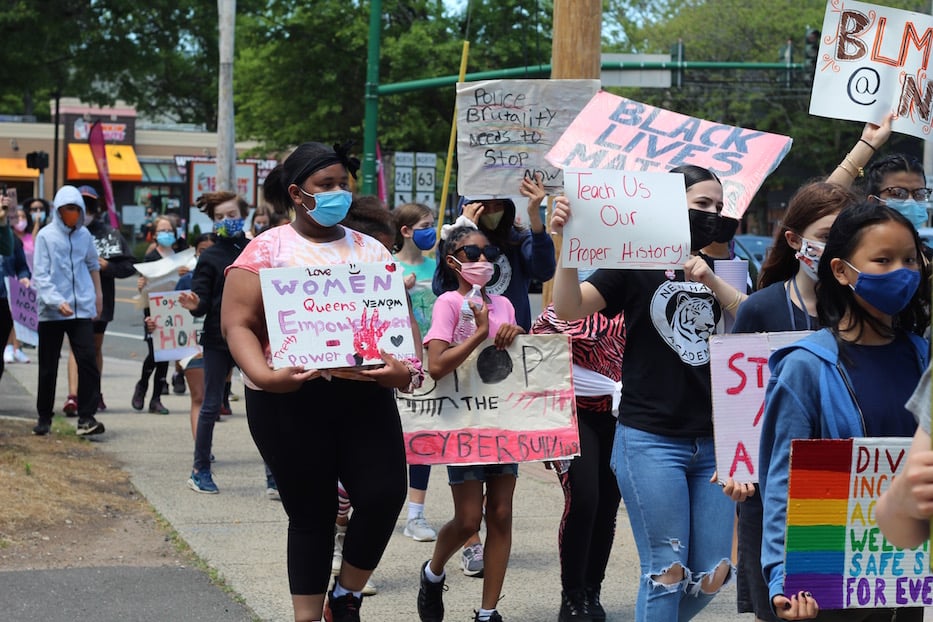 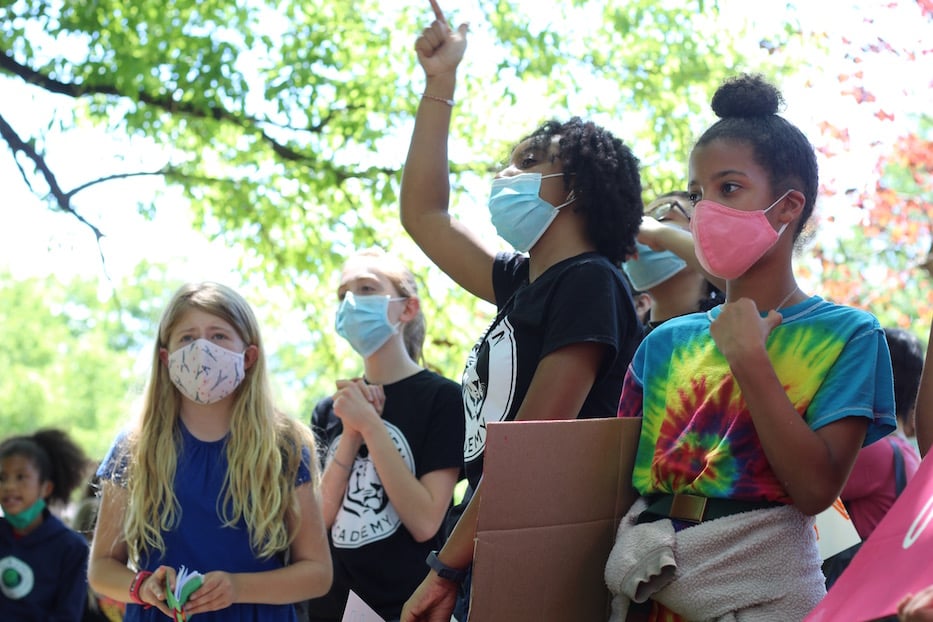 Thursday afternoon marked Elm City Montessori’s second annual Children’s March, held between the Blake Street school building and Edgewood Park in the city’s Westville neighborhood. Inspired by the 1963 Birmingham Children’s Crusade, the march is now an end-of-year tradition for students to speak about the social justice issues that are closest to their hearts. 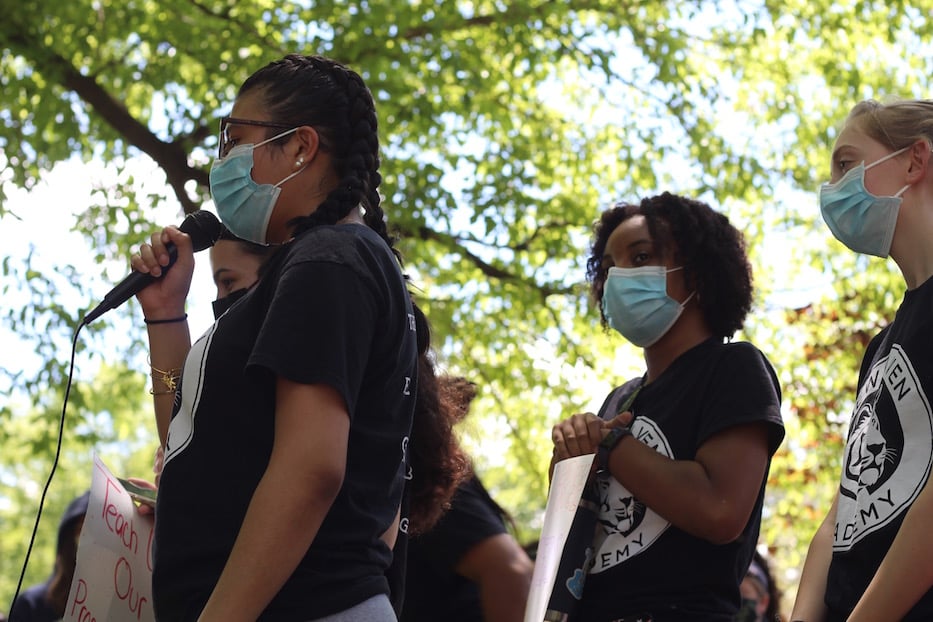 “This is what unity looks like, this is what the future looks like,” said New Haven Academy student Karynn Hardy. “This is what we have when we all come together and we all make a change. And don't ever let nobody tell you otherwise. Because that is the problem. Speak up for truth … cause we all aren’t free until everybody is free.”

Well before students descended on Edgewood Park, many were painting signs, practicing protest chants, and marching around the school’s parking lot and on blocks closer to the school. Around 11 a.m., nine-year-old Miah Hargett stood with her friends Cassidy Elmore and Alanie Abernathy, waiting for their classroom to walk around the neighborhood.

Miah proudly lifted a pink, red, white and black sign that read “Black Lives Matter.” She said that the movement has become important to her because of her own lived experience.

“Black people are getting killed just because of their skin color,” she said. “We’re doing everything in our power to stop that.” 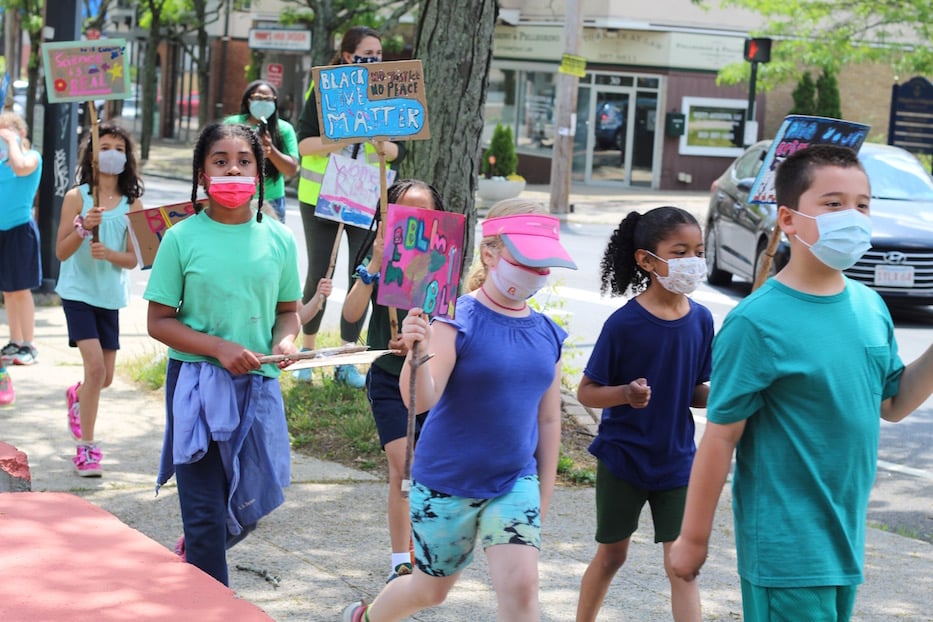 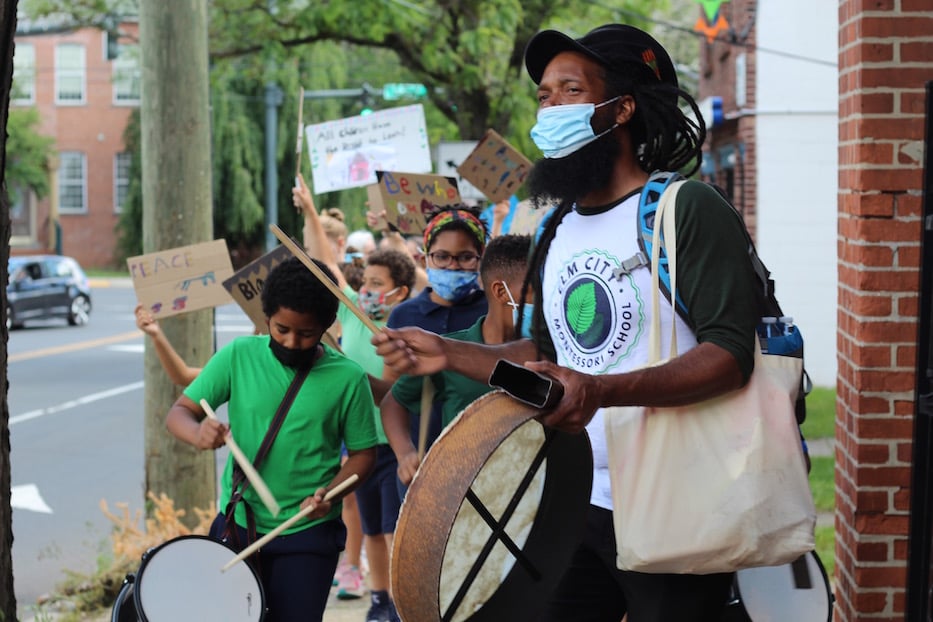 Teacher Susan Clark, who supervises first through third grade classes, gave them a wave, and they were off. Magnet Resource Teacher David Weinreb jogged to the front of the line, leading students in singsong calls of “Science is/Real!” and “Black Lives Matter” that swelled over the warm sidewalk. Gammy Moses led a drum section near the front of the line. The gentle, steely ra-pa-pa-puh of the drums echoed down the street and into the center of town.

Students marched up Blake Street, down Whalley, and over a new mural on Fountain Street. As they walked down the street, drivers honked and pumped fists and upturned palms in solidarity through their open windows. A few trucks slowed and gave long, sonorous honks as little bodies scurried across the street. On Whalley, a Thursday morning brunch crowd became an uproarious cheer section. On Alden Avenue, at least one family came out onto their front porch to cheer students on, their young daughter dancing along on the steps.

“We’ve talked a lot about children’s rights around the world,” Clark said. “They’re like, ‘We have all those rights. We have water. We have food. We have a place to sleep.’ We’ve talked about how some people, some children, don’t have those things.”

Especially this year, she said, students have been reading and talking about anti-Black racism in the U.S. When classes started discussing the Birmingham Children’s Crusade, many were quick to draw on their own experience as young people.

“They understood why the parents couldn’t do it, because they would lose their jobs,” she said. “They understood how it fell on the children to do this, and the children volunteered and wanted to do it. It’s really great to see that at such a young age, you give them the vocabulary, and suddenly they have the ability to understand so much more of it than we sometimes think.” 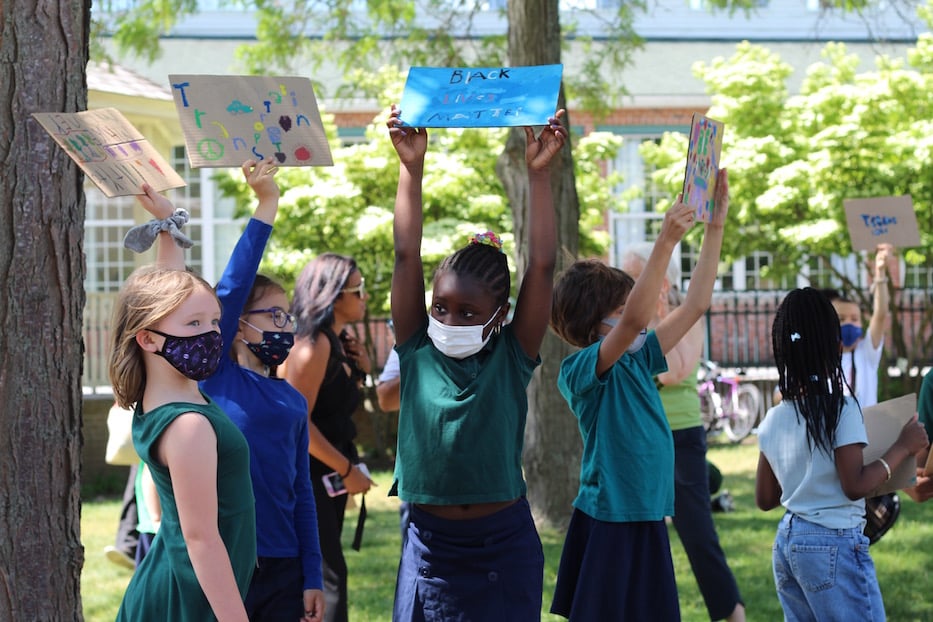 Students getting ready for the first march of the day around 11 a.m.

That same energy pumped through the afternoon’s march, in which fourth through sixth graders headed to the park, their cries of “No justice! No peace!” and “Global warming/Climate change/Make it stop/Make a change!” audible for blocks. At the park, parents, and local activists from Citywide Youth Coalition, Black Lives Matter New Haven, Students for Educational Justice and Reclaiming Our Whole Selves cheered them on.

As students poured in, they came in close, a speaker and mic waiting at the center of a gathering. On the periphery, Mayor Justin Elicker and mayoral hopeful Karen DuBois-Walton leaned in to hear speeches. Emcee Alejandra Corona Ortega, a teacher in the Birch classroom at Elm City Montessori (classrooms are named after trees), reminded students to use “one mic” to listen to each other.

One by one, students spoke on issues that ranged from reproductive health to police brutality, climate justice to safe and affordable housing. Surrounded by three of her classmates, Aurora Irizarry Cardone told listeners she was proud to be a feminist—and invited other women and allies to join her. 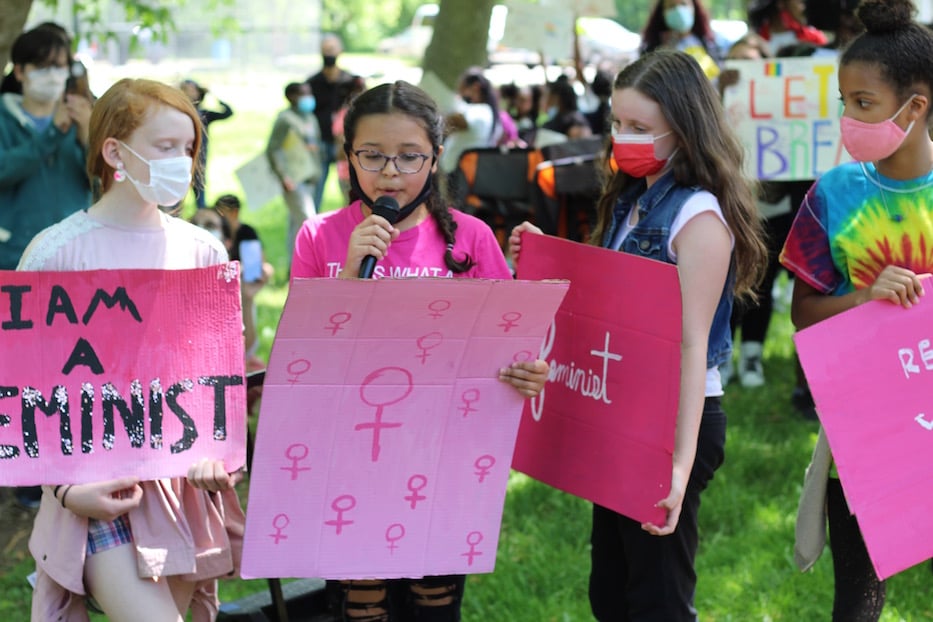 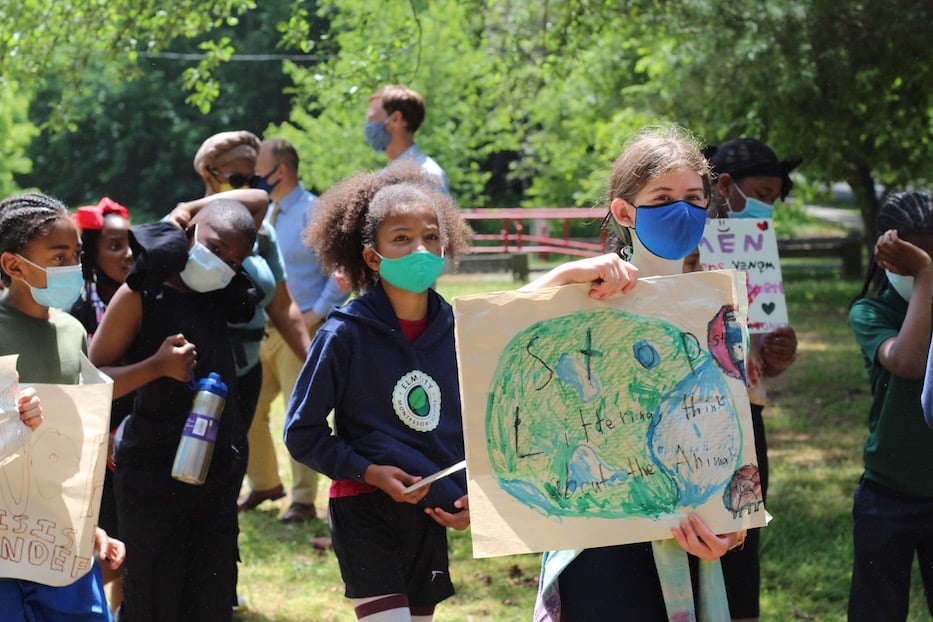 Her friend Violet Webb Sterrer added that in Amanda Gorman, Kamala Harris, Shirley Chisolm and others, she sees role models for how to be a feminist. Later in the march, fourth grader Hayden Hawthorne picked up where she had left off, speaking on equal pay for equal work. After a few false starts and cheers of “One mic!” around the crowd, students fell to a hush as she spoke.

“Women deserve to have the same wages as men do,” she said. “When I grow up, I don’t want to be paid less than men. I’m speaking up for myself and other women who can’t speak up for themselves.

“It takes a lot of courage to come up here,” Ortega reminded students. “Please listen.” 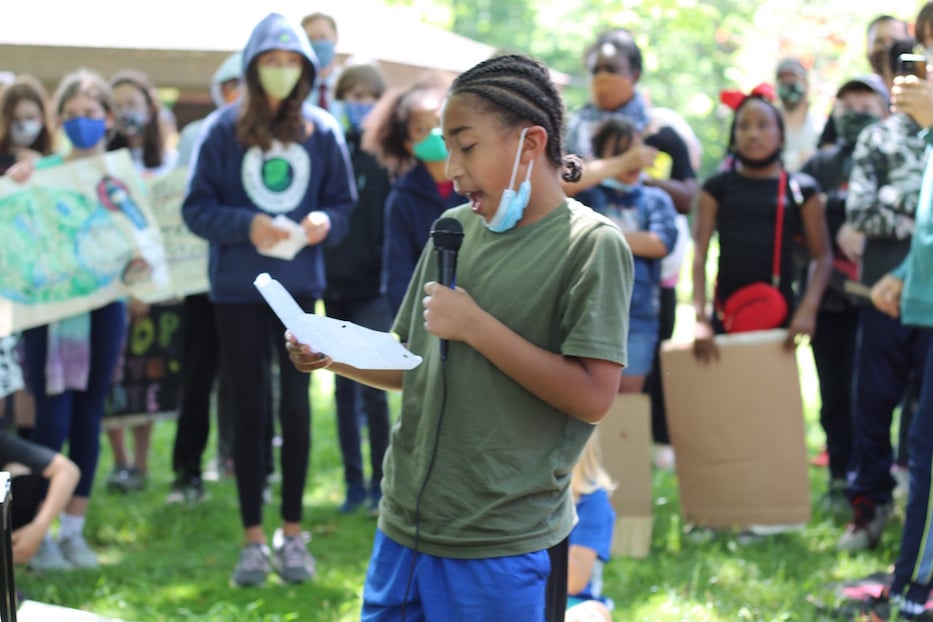 Other students read poetry urging unity and speaking out against racism that has thrummed and throbbed from 1963 all the way through today. When fourth grader Odysseus Szarabajka faltered on an acrostic that spelled out the word “Immigrant,” his sister was there to finish the poem for him.

Kingston Clark, a fourth grader at Elm City Montessori, drew strength from classmates who cheered him on as he read a short speech that he had prepared on police brutality.

“Police are supposed to protect citizens of America,” he said. “But they have not been doing that, like when George Floyd was killed. We should stop this problem now.”

Elm City Montessori student Allison Maloney told her classmates that she was deeply disturbed by the fact that an estimated 2.5 million kids—and 4.2 million youth—are now homeless. She vowed to write a letter to Gov. Ned Lamont, urging him to create more affordable and available housing.

Speakers from other schools joined in. One Beecher School student shouted out the young marchers from 1963, who had helped “give me a better future” with their actions. An Edgewood school student revved up the crowd as she led a call-and-response cheer. So did Davis Street School student Zahir Uqdah Jennings.

“We are Black and we are strong and that is good!” said the Edgewood School student. “When I say ‘Black,’ y’all say ‘lives matter!’” 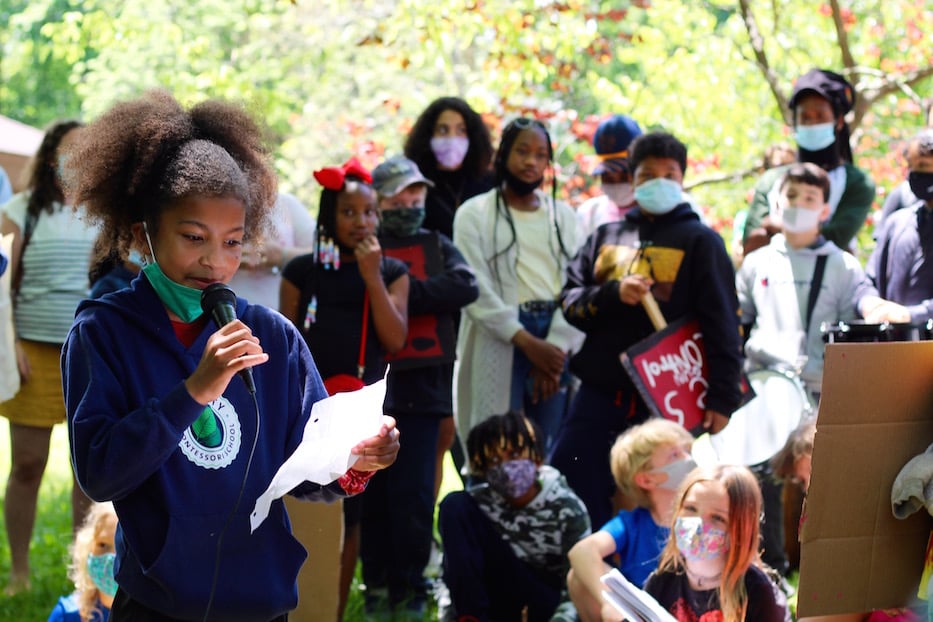 As they bounced across the park, students’ remarks entered a wider civic conversation that has exploded across the country. Currently, there are so-called “heartbeat bills” in multiple states, abortion restrictions in 45 states, a near-total ban on abortion in Texas, and a challenge to Roe v. Wade that has reached the U.S. Supreme Court.

There are also over 100 bills aimed at curbing trans rights across the country in over 30 states. The globe is veering toward climate disaster, with more instances of extreme weather events and climate refugees each year. And the past year has seen the twin pandemics of Covid-19 and systemic racism, with an epidemic in police brutality that has touched New Haven’s youth, families, and activist communities.

As they left yelling “Whose streets? Our streets!” and “No justice/no peace/No racist/police!” they engaged with that history. Clark said that the march continues to grow each year. Thursday, students left taking it one step at a time. Before students headed back towards the school, Ortega picked up the mic one last time.

"Will never be divided!" students shouted back.