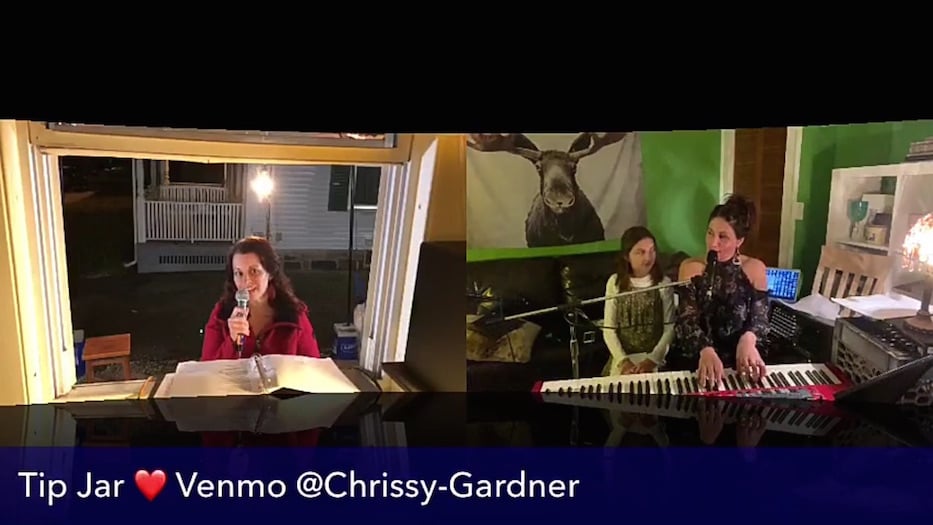 Smooth jazz floated through Chrissy Gardner’s studio as she set up. Bass undulated. Trumpet came in growling. Percussion landed in the background. Gardner fussed with her keyboard and sound system for a moment. In the background, a huge image of a moose’s face hovered over her 12-year-old daughter. Gardner looked into the camera and leaned into the mic on cue.

“Hey everyone,” she said. “Welcome the The Moose!”

That is, The Moose Piano Lounge, Gardner’s quarantine-era weekly variety show on Facebook Live. Almost two months into coronavirus-enforced closures, Gardner has continued to grow the performances, which take place each Friday night from her Westville home.

While she performs inside, she invites guests to join at a physical distance, often singing through their car windows or from the wide berth of her driveway. Or as she calls it, Far North Jersey Alley—a nod to her home state—where requests are welcome and encouraged.

Guests have included members of A Broken Umbrella Theatre and its spinoff improv group The Regicides, her daughter Lucy, as well as Gardner’s musician friends, accompanists, and colleagues who are suddenly out of work. Each week, she shares proceeds from the event with a different artist or Westville business that has been affected by COVID-19. Everything is run virtually, through a Venmo handle that becomes a tip jar at the end of the night.

The series was born in March, when all of Gardner’s gigs were wiped out in a matter of days. In a normal year, Gardner plays anywhere from 80 to 100 concerts, from local events to shows that have her driving across state lines for a few hours at the mic. So she sat down, and reimagined what some of that performance looked like online.

Initially, she started small. In the evenings, her daughter Lucy would present a painting that she had created during the day, and Gardner would play and sing a song in response. She began to hear positive feedback—not just from friends in the neighborhood who saw it over a livestream, but from friends all over. The first Friday in quarantine, Gardner flipped on Facebook Live and took requests for three hours. Lucy showed her paintings.

“We did it for connection and to raise the vibration both for ourselves and for whoever was watching,” she said. “I received a wonderful response and generous tips through Venmo and decided to share a portion of what I made with a waitress from Crave [Restaurant] who had lost her job as well.”

Once the night was over, she could feel the potential for a weekly series. The second Friday of quarantine, Gardner fired up the livestream again and shared tips with her neighbor Ruben Ortiz, who is a longtime friend, collaborator, and co-founder of A Broken Umbrella Theatre.

She asked him to perform a request out in the driveway, far enough away that both of them were practicing physical distancing guidelines (and then some), but close enough that the two could still feel connected. Ortiz’ wife Michelle Oaks Ortiz, who has been Gardner’s friend for over 25 years, stepped in as a sort of co-producer. Musician Jerome Fox has also stepped on to help with the series.

“They are like my family,” she said. “None of this would have become what it has become without them. Michelle, Ruben, Jerome and I are guiding this ship together, and there are so many people contributing with their energy and talent every week.” 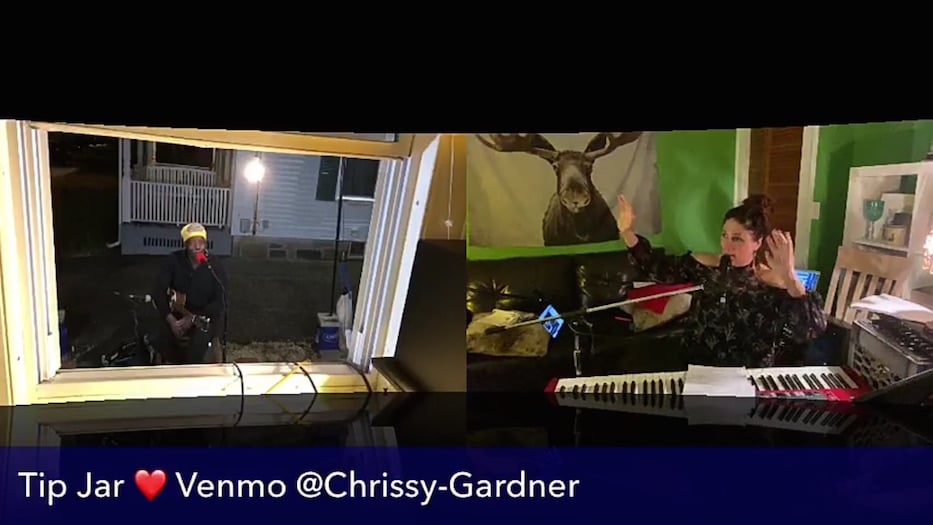 Since, the three have picked a different artist and businesses business to share tips with. Recent recipients have included A Broken Umbrella’s Jes Mack, Luke and Mistina Hanscom of Lotta Studio, and musician Luke Rodney. While part of the performance is raising money, she added, the team also wants to make sure to provide a joyful, creative outlet for people who may be anxious, physically and emotionally exhausted, out of work, and worried about what the near future holds for them.

“We are finding a way to create together and lean on one another even in these circumstances, and we wish for that to bring hope, laughter and love to those watching,” she said. “We all have a lot of skills and talents that we bring to the table, but we are also pretty darn good at not taking ourselves too seriously.”

Last Friday—a “singer/songwriter night” reserved for musicians who have both written and performed their music—that approach crackled to life just after 7:30 p.m. Gardner turned on Facebook Live and the bright green walls of her studio came into view.

As she watched requests roll in (she also takes them through her website all week), she delighted at a call for Billy Joel’s “New York State of Mind” first written and performed in the 1970s. The melody coasted from her keyboard out through Facebook, upbeat but slow and calm at the same time.

“Some folks like to get away/ Take a holiday from the neighborhood,” she crooned. “Hop a flight to Miami Beach or to Hollywood/But I'm takin' a Greyhound on the Hudson River line/I'm in a New York state of mind.” 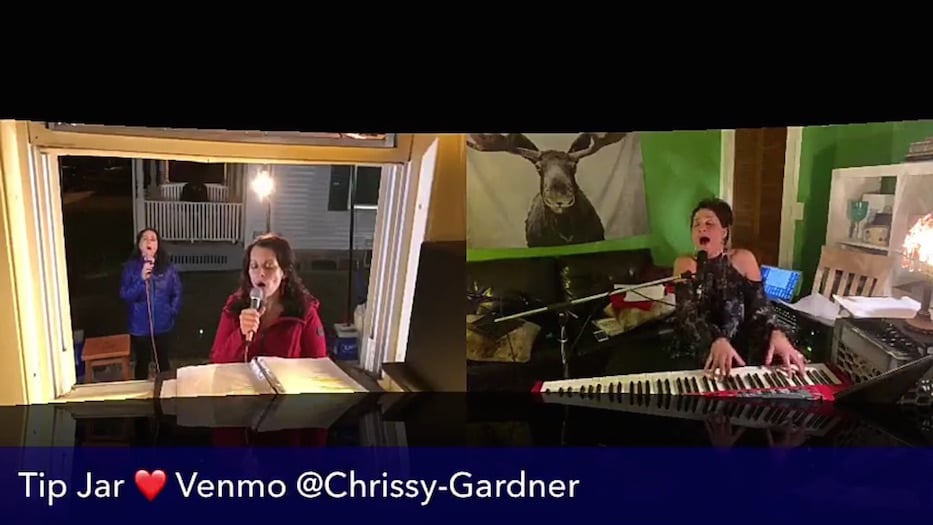 She kept fielding requests: more Billy Joel, then Patsy Cline, Dolly Parton, Bob Marley. Gardner is a vocal shapeshifter by nature: she can flow right from “Summer Island Falls” and “Downeaster Alexa” to “Jolene” and “Be Happy,” with nods to Halloween and Christmas in between just because.

But Friday, she didn’t have to do it alone: she welcomed Branford-based musician Luke Rodney, vocalists Oaks Ortiz and Rachel Alderman, and the Far North Alley Dancers (Ortiz, Ryan Gardner, and Ian Alderman) all while using social distancing.

The Moose doesn’t stop at music. Friday, Gardner and Lucy received a visit from their friend Charlie, a sock puppet played by Ruben Ortiz whose presence was as much for children as it was for children at heart.

As he dropped in on the two—at a distance—Charlie explained that he was sad, because his day had not ended in the way he’d hoped. He’d eaten chocolate cake for breakfast. And for lunch. But his mom wouldn’t let him have any after dinner. Gardner played along on the piano as a grief-stricken Charlie sang Paul Anka’s “My Way.”

In an email after Friday's show, Gardner explained that the performances take almost a week of preparation, during which she is also teaching virtually and helping Lucy with distance learning. On a given Sunday, she starts brainstorming, a process that then leads to collecting song requests, sketching out numbers that will require other performers, and making sure technology is set up correctly.

Each week, she has watched the audience grow: The Moose Piano Lounge is now regularly watched in between 70 and 90 households. Some families have sent her photos of their computers and speakers set up by their fireplaces, dinner tables, quarantine game nights and disco-lighted rooms.

“Many have written to me to let me know it is the thing they look forward to most in the week,” she said. “We are thrilled about that.”

“The Moose Piano Lounge is a response to this moment,” she added. “We are not living in the past. We are not dreaming of the future. We are trying to find happiness and love right now within these parameters. Right now. In the middle of this. And that is what this is about more than anything else. That light is always possible. I think that is what people watching are connecting to. And music has a way of opening hearts.”